The Week 5 ACC Eckrich Team of the Week powered by PFF saw some impressive performances and, of course, the strength of opponent also factored into the overall selections as did the PFF player grades. 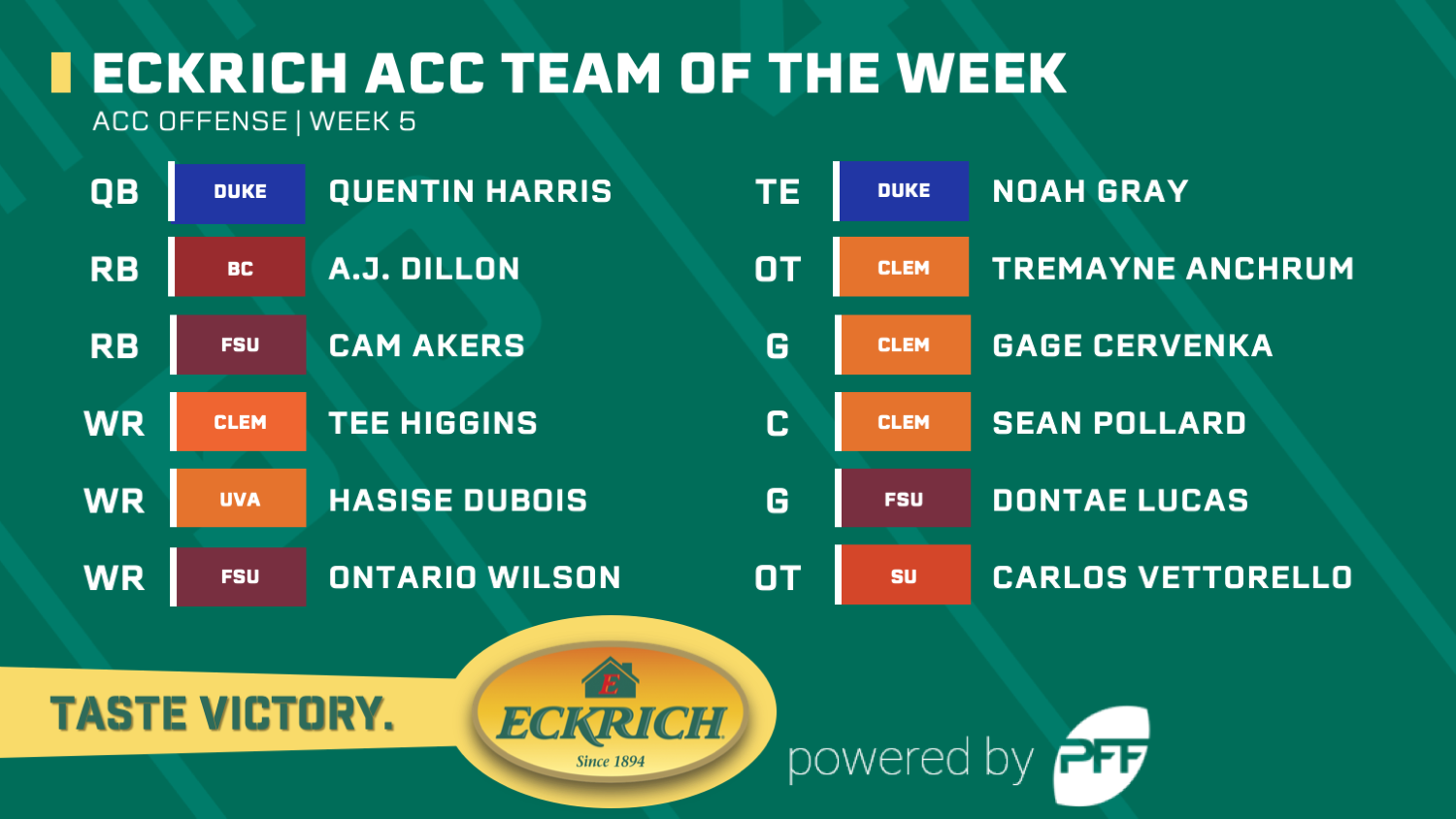 Harris finished with just 163 yards through the air but two passing touchdowns and 100 yards on the ground. He had 13 combined conversions through the air while his 67 rushing yards on designed carries paved the way for another score and four more first-down attempts. He was efficient and kept the Duke offense moving when it mattered most for the big win in Blacksburg.

Dillon ran for over 100 yards, in a surprise to no one, as the Eagles almost got the upset win over Wake Forest. Dillon broke off 104 of his 159 yards on the ground after contact and forced a league-high 10 missed tackles.

Akers is the workhorse for the Seminoles but with Hornibrook at quarterback, only need 17 carries to reach 82 yards on the ground and a score. He broke six tackles and gained 78 of his 82 yards after contact.

Emerging as the top talent on their offense this season, Higgins as surpassed everyone for top-graded Clemson Tiger this season. With performances like his last one, he's likely not to relinquish that top spot anytime soon. He turned six catches into 129 yards and a touchdown while the other five catches moved the sticks for a first down.

Perhaps the catch of the evening, Dubois is no stranger to #BigTimeCatch moments this year. He finished the game against Notre Dame with nine receptions for 143 yards and a score while seven other receptions moved the chains for a first down. He and Joe Reed were certainly not to blame for the team's loss.

Seeing a bevy of snaps for the first time this year, Wilson made the most of his four targets, hauling all four in for 91 yards and a score. The other three catches moved the chains and forced two missed tackles in the process. He saw a perfect 158.3 passer rating when targeted.

Gray finished Duke's trouncing of Virginia Tech with six receptions for 50 yards and two scores as he was dominant at finding the open lanes across their defense. He also had one of the conference's top run-blocking grades at the position to boot.

Anchrum kept a clean sheet in pass protection, not allowing a pressure on his 35 pass-blocking snaps for the Tigers. He also had the conference's top run-blocking grade among tackles in an all-around dominant performance.

Like his fellow lineman, Cervenka also kept a clean sheet in pass protection and had a top-five run-blocking grade as the entire right side of the Clemson offensive line was physically dominant.

Pollard allowed two pressures in the passing game but had an extremely efficient game paving the way for the run. He had the conference's second-highest run-blocking grade among all centers.

It's not often to highlight a Florida State lineman over the past few years it seems but Lucas had a strong game across the board. Even with a sack allowed to his credit, Lucas didn't allow another pressure on his 33 other pass-blocking reps and had a top-10 pass-blocking grade and top-five run-blocking grade among all guards.

The Orange got a big game from Vettorello, who finished the contest with just two pressures allowed and a top-five ranked run-blocking grade among qualifying tackles. 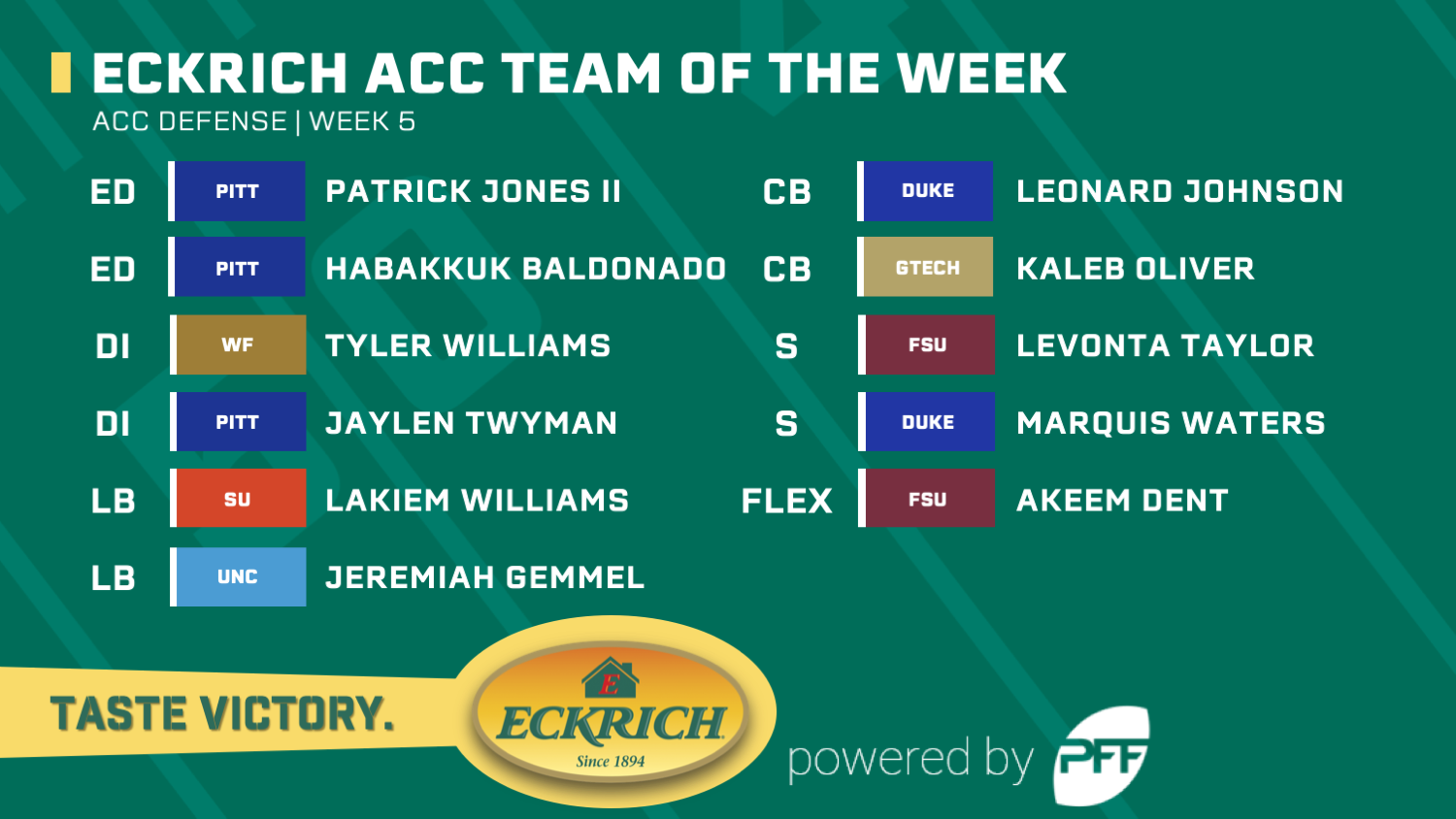 Jones led all conference edge defenders in total pressures by recording 10 of his own that including a sack, a QB hit and eight additional hurries. He won the vasty majority of his pass-rushing snaps, taking full advantage of the Delaware offensive line.

Baldonado rushed the passer just 18 times but came away with six total pressures and two sacks. He chipped in with an additional run stop on one of his eight snaps against the run, showing just how dominant he was.

Williams recorded just a lone pressure on the quarterback on his 15 pass-rushing snaps but his 27 snaps against the run were phenomenal. He finished with four solo tackles, all of which went down as a defensive stop and he did so without missing a single tackle attempt.

Twyman is just another Pitt defender that feasted on the lesser competition that was in front of him. He recorded four pressures and had five defensive stops, four of which came against the run.

Williams was all over the field, rushing the passer just four times and recording three pressures; allowing just 10 yards on his 27 snaps in coverage; churning out six tackles without a missed attempt and rounding it all out with three defensive stops.

Gemmel was the better of the two UNC linebackers on the afternoon, despite Surratt getting home with seven total pressures. Gemmel was targeted four times as the primary coverage defender against Clemson and allowed just two receptions for negative yardage. He broke up a pass and saw just a 56.3 passer rating into his coverage.

The Yellowjackets scored their only two points of the afternoon without their offense on the field as the defense put up a valiant effort despite no offensive firepower. Oliver was targeted four times and allowed just one catch while intercepting one of his own.

The Blue Devils got a big win in conference play on Friday night against Virginia Tech as Johnson was an integral part. He limited the Hokies to just nine yards in his coverage as he was targeted six times and allowed just one catch. He made an interception of his own as well as another pass breakup, finishing with an elite overall and elite coverage grade in the process.

Taylor flew around the field on his 30 snaps, recording three defensive stops (one against the run) and was stout in coverage. He didn't record an interception but as the primary coverage defender, allowed a long reception of just one yard as he limited the other catch in his coverage to -2 yards.

Waters and Johnson anchored a Duke secondary as the latter came away with three defensive stops and the conference's fourth-highest coverage grade among qualified safeties. Waters didn't miss a tackle in his eight attempts showing solid all-around skills.

Playing just 28 total snaps, Dent was on the field for 26 pass attempts against NC State. He was the primary coverage defender on just one of those attempts but still ended up the afternoon with two pass breakups as he flew all over the field like the aforementioned Taylor.