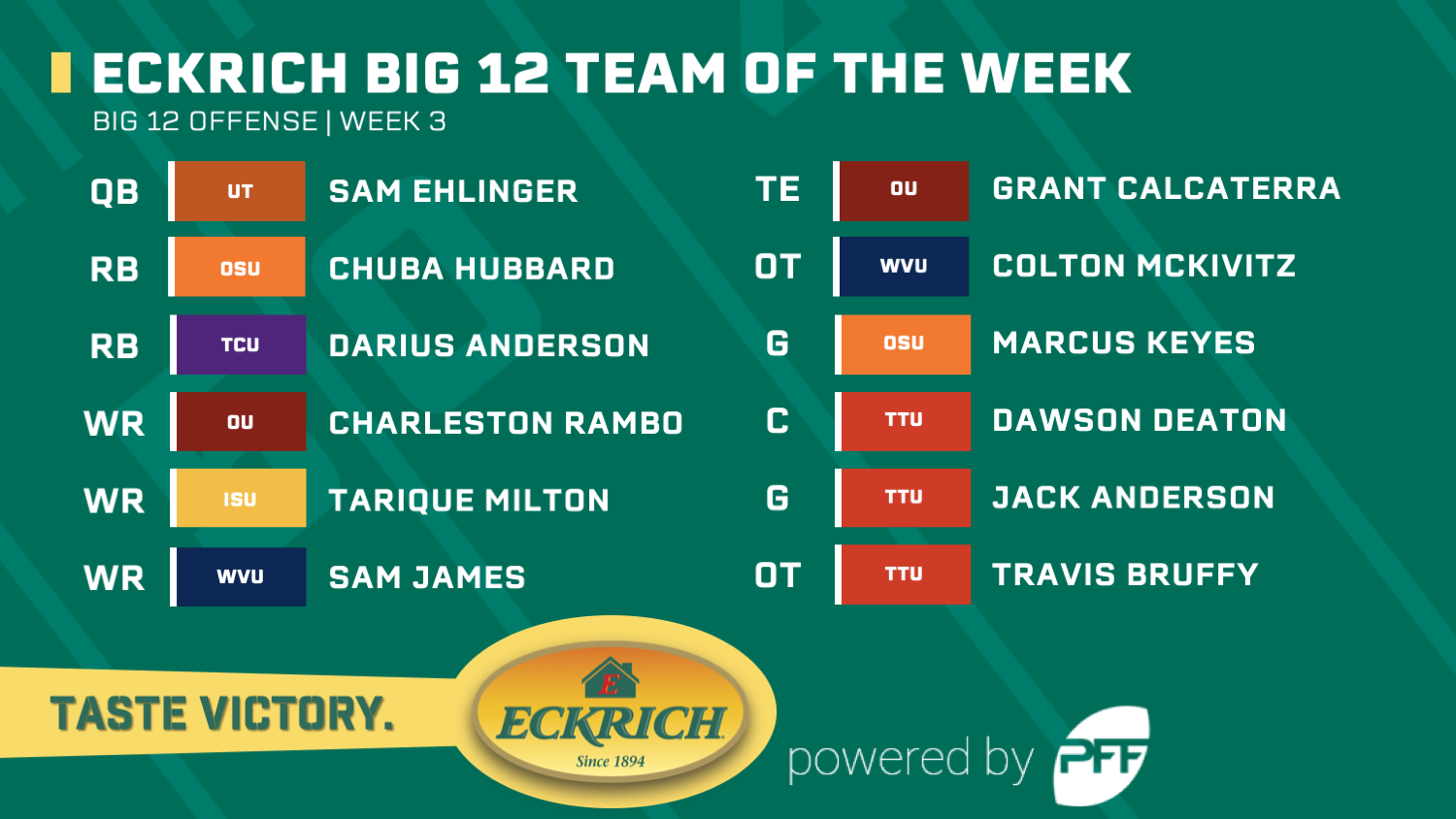 The Longhorns got back into the win column against Rice and Ehlinger did everything you'd want him to against the lesser competition. He completed 23-of-27 passes for 279 yards and three scores as he had a dominant display of accurate throws to all levels of the field.

Hubbard once again led the nation in rushing yards with 256 this week, averaging 8.0 yards per carry. He broke six tackles and gained 153 yards after contact on the weekend for another outstanding performance.

With two touchdowns to his name, Anderson and the Horned Frogs ousted Purdue and Anderson did the majority of the damage himself on the ground. He ripped off 179 total rushing yards including 120 of which came after first contact. He broke eight tackles on the ground to lead the conference as did his five runs of at least 10 or more yards.

James saw a whopping 15 targets in Week 3, hauling in nine receptions for 155 yards and a score. Six more of those receptions moved the chains for a first down and he forced three missed tackles and 88 yards after the catch as he emphatically scored the game's most impressive touchdown by weaving through the NC State secondary en route to six points.

Rambo needed just five receptions to gain 116 yards, two scores and 57 yards after the catch. He had a perfect passer rating when targeted and moved the chains on two more receptions as the Sooners routed the Bruins.

Tying for the conference-lead in receiving yards, Milton was a bright spot for the Cyclones offense against Iowa, catching all nine targeted passes his way for 155 yards. He scored a touchdown and had five more first-down receptions as he gained 65 of his yards after the catch.

Calcaterra and the Sooners offense took the wind out of Bruins sails early as the tight end hauled in just two receptions for 40 yards. He broke two tackles after the catch and had really strong grades in the run game on his 12 snaps in the run game.

On 45 snaps in pass protection, McKivitz allowed just a single pressure while his efforts in the run game were nothing short of dominant. On his 27 snaps, he moved defenders off the spot and had impressive downfield blocks, leading the conference in run-blocking grade by a comfortable margin.

The Cowboys got a big-time performance from their left guard as Keyes held the conference's highest run-blocking grade by over 10 grade points and allowing just a single QB pressure on his 31 reps in pass protection.

In what will be a recurring theme, Deaton was dominant in pass protection, allowing a single QB pressure on his 55 pass-blocking snaps. He also led the conference in run-blocking grade much like Keyes above, by a hefty margin.

Anderson allowed a single QB pressure on his 55 snaps in pass protection and though they didn't get the win, he, Deaton and Bruffy mentioned below were absolutely dominant in the quick-passing attack for the Red Raiders.

For the second straight week, we see Bruffy represented here as he allowed just one hurry on his 55 pass-blocking snaps. He has now allowed just three total pressures all season long and has plus grades in the run game in all three games. 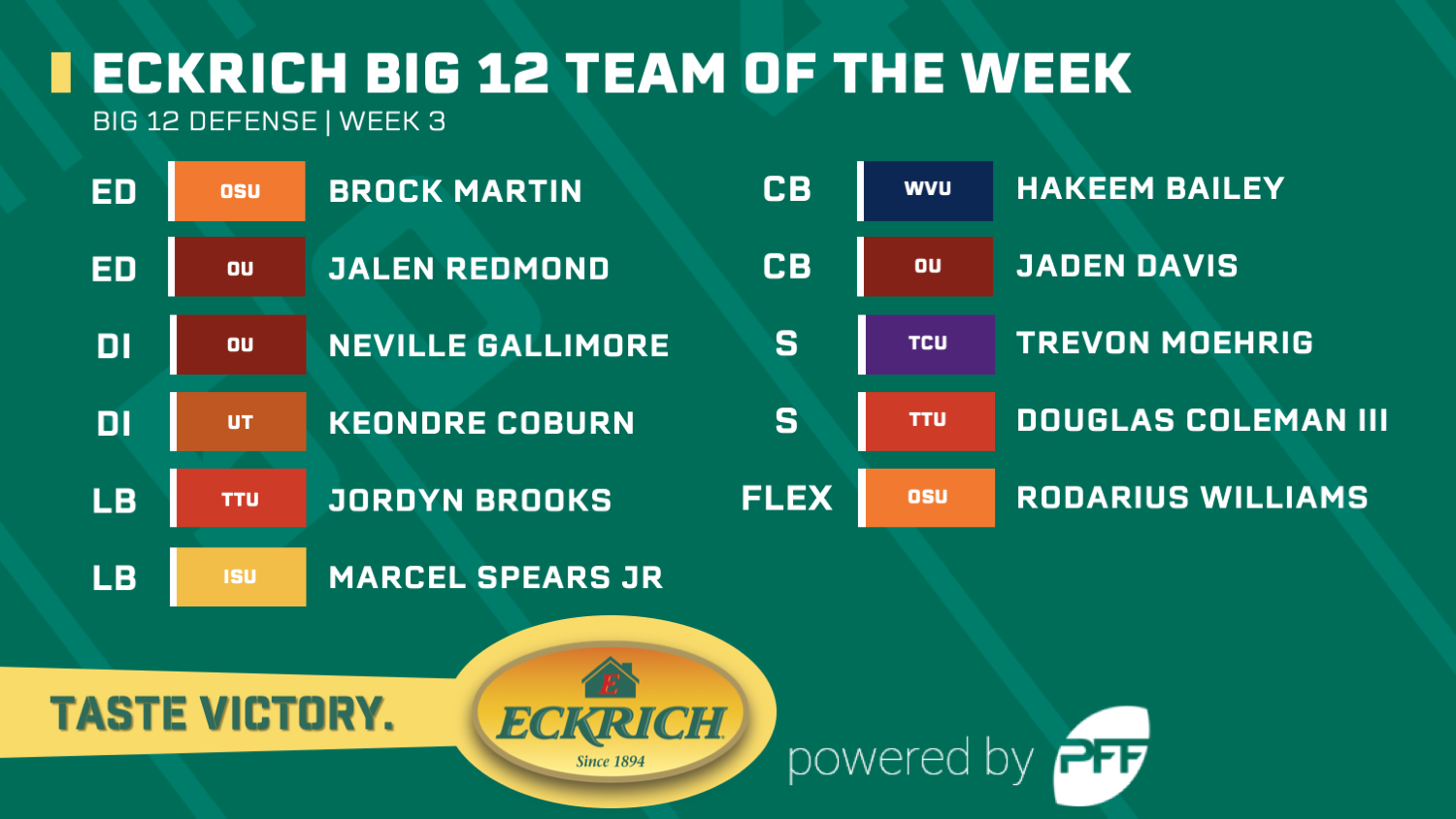 A tackling machine, Martin dropped into coverage on 14 snaps, played the run on another 34 and rushed the passer on 15 snaps for the Cowboys. He made four defensive stops and eight total tackles without a miss while recording two more QB pressures.

A strong day on the pass-rush, Redmond recorded four pressures on all of 17 pass-rush attempts while recording two more defensive stops against UCLA. He did all of this without missing a single tackle.

Gallimore and Marquise Overton represent perhaps one of the nation's most fierce interior duos as Gallimore had the dominant game of the two of them against UCLA. He registered four total QB pressures on just 21 pass-rushes and made a defensive stop in the run game to round out the day.

Coburn needed just 11 pass-rushes to record four total QB pressures for the Longhorns, including a sack and three more hurries. He made three total defensive stops including two more in the run game in a dominant, albeit short, performance against Rice.

Brooks is firmly placed on the Big 12 Team of the Week much like Dakota Allen used to find himself more often than not as Brooks recorded 13 total tackles and seven defensive stops against Arizona. They didn't get the win but it wasn't because of Brooks' performance.

Spears made five solo tackles in the game against Iowa, all five of which went for defensive stops and he nabbed a pass breakup on his lone target in coverage. On his seven blitzes, he finished with four QB pressures as he was impressive all over the field.

Locking down receivers in his coverage against NC State, Bailey was targeted seven times and he allowed all of 40 yards while making two pass breakups in the process. He allowed a long reception of just 11 yards and just nine yards after the catch as he made nine solo tackles and four defensive stops.

Davis broke out as potentially a bright and shining spot for the Sooners defense for years to come, Davis saw four passes thrown his way in coverage and he allowed just 17 yards on those attempts. He didn't miss a tackle while making six solo stops on his own.

On 34 snaps in coverage, Moehrig made it difficult to complete passes for the Boilermakers, breaking up two passes and intercepting another. He flew all over the field and recorded two total tackles and not allowing a single catch as the primary coverage defender in the process.

In a big-time performance that may be marred by the outcome of the game, Coleman made two impressive interceptions and a whopping 13 total tackles in the game against Arizona and Khalil Tate.

Williams had plus grades across the board and on 41 snaps in coverage, he allowed just one reception for all of six yards. He saw a 56.3 passer rating when targeted and has not allowed a touchdown all season long in his coverage.