The Week 10 Eckrich Big-12 Team of the Week powered by PFF saw some impressive performances and, of course, the strength of opponent also factored into the overall selections as did the PFF player grades.

From a convincing win by Kansas State over Kansas to a tight battle between TCU and Oklahoma State, here were the conferences best players from Week 10. 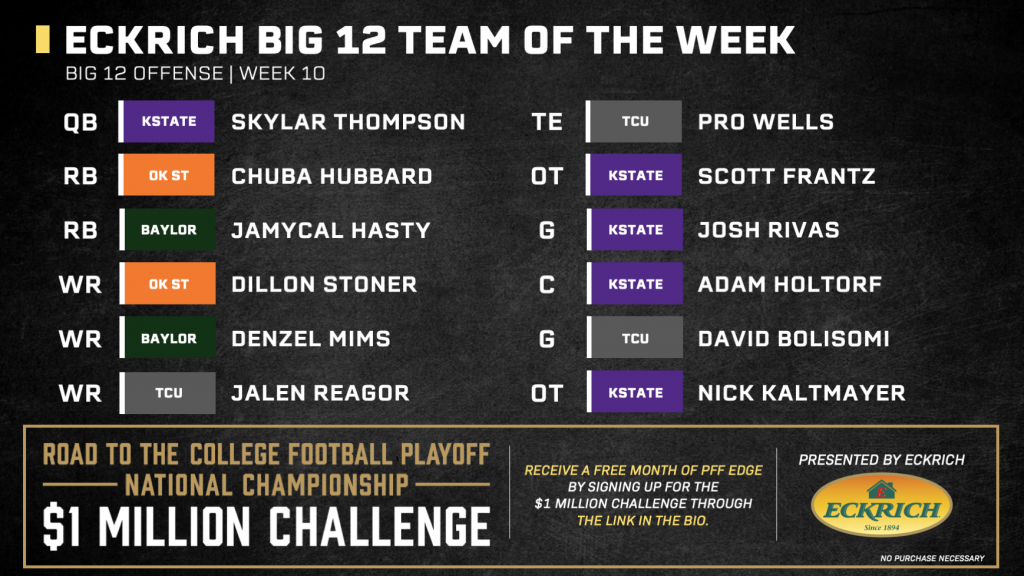 Thompson finds himself on the Big-12 Team of the Week for the second time in as many weeks, leading his team to a blowout win over Kansas. The signal-caller played it safe on Saturday, averaging just 8.5 yards of depth per attempt. But his eight scrambles and relatively conservative play got the job done.

You simply can't stop Chuba Hubbard. He torched the TCU defense for 223 yards on the ground — 209 of which came after contact. Hubbard is a frequent visitor on the team of the week, and his performance against the Horned Frogs only furthered his Heisman campaign.

JaMycal Hasty put in work on minimal carries, rushing for four first downs on just 14 attempts in a win over West Virginia. His 5.5 yards per attempt ranked second among Big-12 running backs with at least 10 carries in Week 10.

All three of Dillon Stoner's catches on Saturday went for first downs, including one for a score. His 73.5 game grade was a season-best, as Oklahoma State topped TCU.

One of three Big-12 wideouts to eclipse 90 yards receiving in Week 10, Mims caught 5-of-7 targets for 94 yards, a touchdown and a 153.3 passer rating when targeted.

Reagor hauled in seven of his 11 targets against Oklahoma State and finished the week as the conference's only receiver to top 100 yards receiving (he put up 128).

With four catches on eight targets, Pro Wells had his best game of the season against Oklahoma State. He was the only Big-12 tight end to find the endzone this week, too.

Frantz played 73 total snaps on Saturday, finishing with a pass-blocking grade of 70.0-plus after allowing three quarterback hurries on his 27 pass-blocking snaps.

For the third straight game, Josh Rivas did not allow a single quarterback pressure in his time on the field. He continues to build upon a season where his overall grade now tops 85.0.

Holtorf was one of two Big 12 centers to not allow a quarterback pressure in Week 10, and he subsequently earned his first 80.0-plus pass-blocking grade of the season.

Bolisomi kept his opposition from taking quarterback down yet again — he has surrendered just one sack on the season. While he allowed three pressures on the day, he was stout overall.

The Kansas State offensive line takes over the Week 10 Big 12 Team of the Week, and Kaltmayer stood out. He didn't allow any pressure on quarterback Skylar Thompson on 27 pass-blocking snaps. 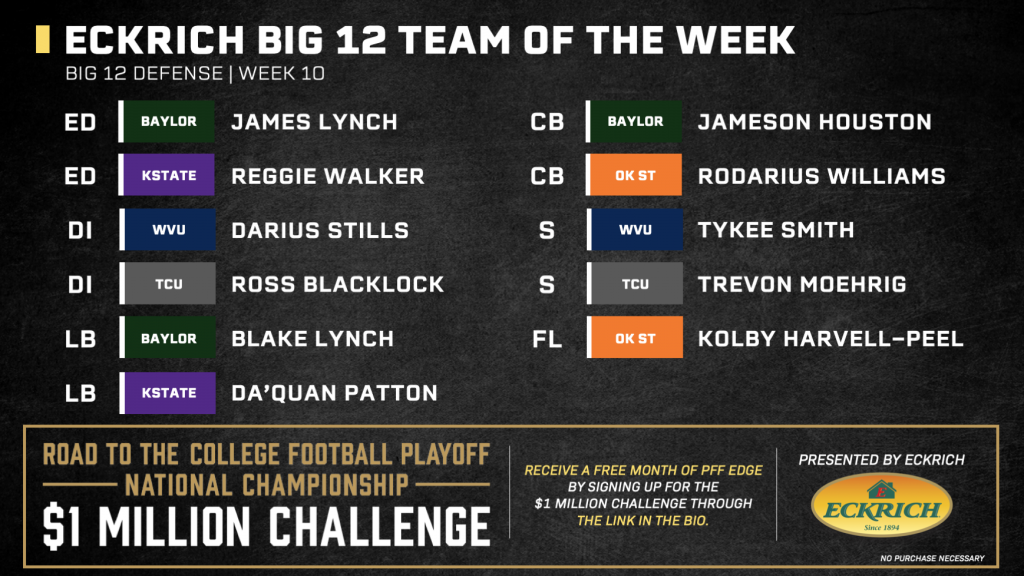 It's been a torrid season on the edge for Lynch this season — he has the most pressures by a Big-12 edge defender (and the gap is 14) between him and the next highest). But in Week 10, it was his two run stops that carried him to the team of the week

Reggie Walker found the quarterback a whopping six times on Saturday, with five going down as hurries and one as a hit. It was a season-best performance for him from the edge,

With three sacks and seven stops to his name against Baylor, Darius Stills was literally everywhere. Whether it was taking down quarterback Charlie Brewer or stuffing the run game, Stills was a force.

Blacklock finished the day as PFF's highest-graded interior defender in the Big 12. It was due in large part to his seven stops, which were tied with Stills for tops in the conference in Week 10.

While most linebackers tend to be burned in coverage, Lynch was an asset in Week 10. He faced four targets, allowing two to be caught for just 11 yards, He notched a pass breakup in the process, too.

Patton saw only 18 coverage snaps in Week 10 and technically wasn't targeted in coverage — but that didn't stop him from snagging an interception. He also added a quarterback pressure and a stop on the day.

There were two cornerbacks in the country in Week 10 to face at least seven targets and allow a passer rating of 0.0. Jameson Houston was one of them, allowing 2-of-7 targets to be caught for a meager 11 yards and an interception.

Williams led the Big 12 in coverage snaps this week — with 53 — and gave up just one catch on the day: a measly two-yard completion. It was a stellar day in the secondary for the Oklahoma State cornerback.

Five stops, a sack and seven yards allowed in coverage — it all culminated in a stellar effort despite West Virginia's Thursday night loss to Baylor.

Another solid performance from Trevon Moehrig saw him not miss a single tackle and come away with an interception in coverage — where he allowed all of five yards.

Harvell-Peel was on another level on Saturday; on the three incompletions he forced, he came away with two interceptions and a pass breakup in coverage.