The college football season is in the home stretch for most teams and after a full slate of games on Saturday, we at PFF and our team of over 500 analysts has dissected and graded every player on every snap of every game to bring you the most detailed and valid set of picks you can find anywhere.

The Week 10 Eckrich Team of the Week powered by PFF saw some impressive performances and, of course, the strength of opponent also factored into the overall selections as did the PFF player grades. 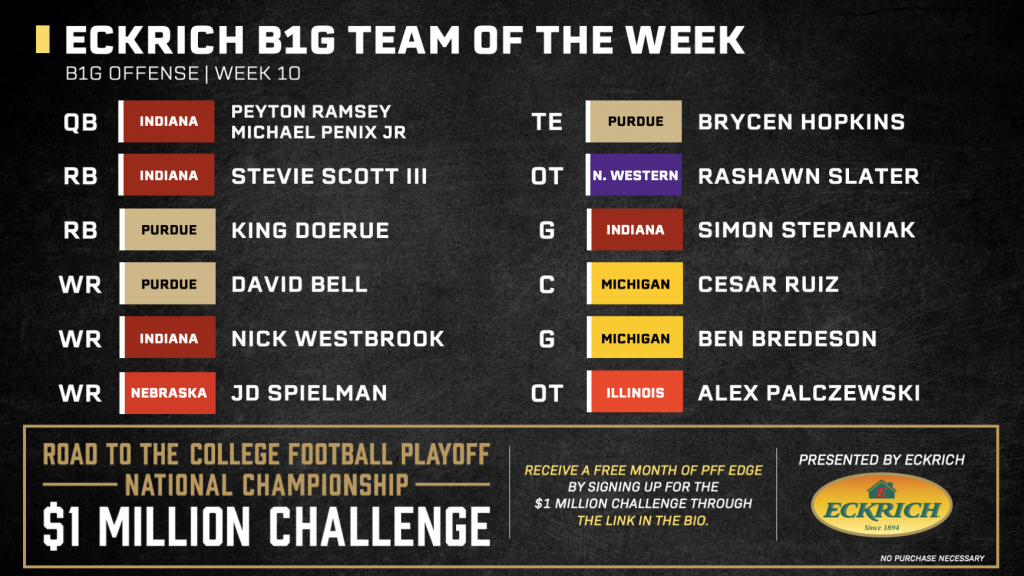 The Hoosier quarterbacks combined to connect for 17 completions on 25 total attempts for 270 yards in Indiana’s 34-3 win against Northwestern on Saturday. Penix started the game for Indiana, going 10-of-15 for 162 yards before leaving with an injury. His 80.3 passing grade was tops in the conference for the week. In relief, Ramsey hit on seven of his 10 attempts for 108 yards and a score. The duo was moving the chains all game, as 11 of their 17 completions went for a first down in the victory.

The Hoosier running back paced the offense all game versus Northwestern, turning 26 attempts into 116 yards and two scores. On the day, he finished with seven first downs and four runs of 10-plus yards with 53 of his total rushing yards coming after contact.

Doerue led the Purdue rushing attack in their 31-27 comeback victory against Nebraska on Saturday afternoon. He finished with 71 yards on 15 attempts and one touchdown with four first downs and two runs of 10-plus yards. He was a load to bring down, forcing three missed tackles while 44 of his total rushing yards came after contact. In total, he averaged 2.93 yards after contact per attempt in the victory. Doerue also added five catches for 31 yards and a score in the passing game.

Bell scored the go-ahead touchdown in Purdue’s 31-27 come-from-behind victory with just over a minute to play on Saturday. The Boilermaker receiver hauled in seven receptions on nine targets for 23 yards for the game with his last catch certainly being his biggest of the day as Purdue earned their third win of the season.

Indiana’s offense was rolling on Saturday versus Northwestern, and receiver Nick Westbrook was a big part of their success. He caught all five of his targets for 59 yards and three first downs. His 78.6 receiving grade for the week ranked No. 1 at the position in the conference.

Spielman earned the highest overall grade among receivers in the B1G this weekend for his performance versus Purdue. He hauled in six catches on nine targets for 123 yards with four of his receptions going for first downs. Spielman ate up yards after the catch on Saturday with 74 yards coming after the reception, most in the conference for the week.

Slater had a clean Saturday at his left tackle position for the Wildcats. In 37 pass-block snaps, he allowed zero pressures on the quarterback en route to his conference-best 89.1 pass-blocking grade for the week among offensive tackles.

Stepaniak was busy on Saturday, tallying 74 total snaps in Indiana’s dominant win against Northwestern. The guard allowed one sack in 33 pass-block snaps, while earning the top run-blocking grade for the week in the B1G.

Michigan controlled the line of scrimmage all afternoon against Maryland on Saturday, and center Cesar Ruiz set the tone. He finished with an 82.5 pass-block grade, as he didn’t allow a pressure in 30 pass-block snaps. He paced the Wolverines' offensive line as the team rushed for 155 yards on 34 carries against Maryland.

Bredeson was dominant at his guard position for the Wolverines, posting the third-highest conference pass-block grade of the weekend at 84.8. In 30 pass-block snaps, he didn’t allow a single pressure in the 38-7 win. Bredeson was almost equally impressive in the running game, again ranking in the top-five in run-block grade.

The Illini right tackle had a rock-solid day, allowing only one quarterback hurry during his 14 pass-block snaps. Illinois was dominant in the second half, and most of Palczewski’s work came in the running game (28 of 42 snaps). He finished with a 64.6 run-block grade, top-10 among B1G offensive tackles for the week. 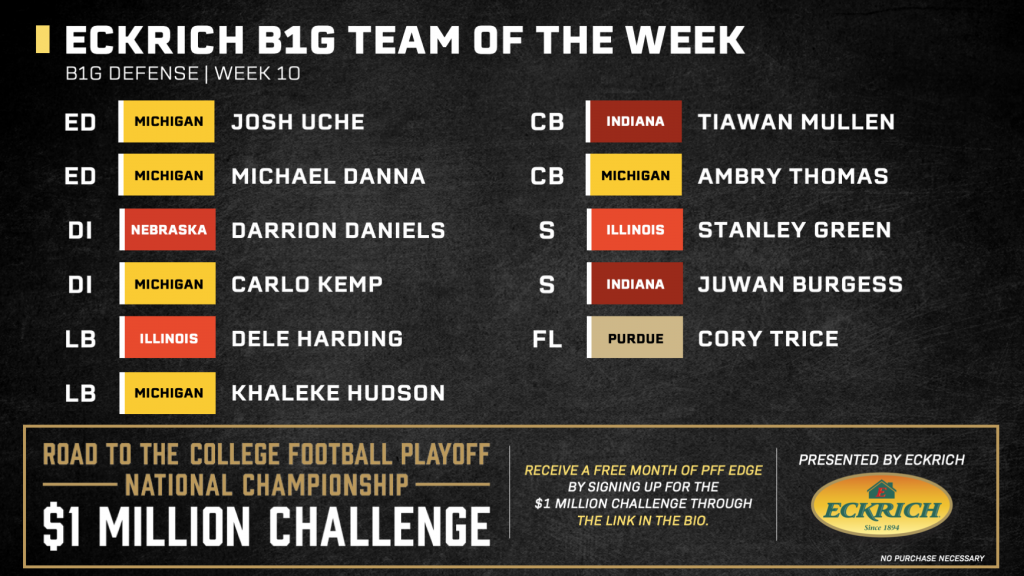 Uche was a playmaker all afternoon for the Michigan defense in their 38-7 victory over Maryland. He finished with the highest pass-rush grade at the position (84.9) as he generated four total pressures, including two sacks. He also finished with three defensive stops in the blowout win.

Lining up opposite of Uche, Danna also put together a monster afternoon for Michigan. He finished with an 83.8 pass-rush grade, totaling five pressures on the quarterback with four being hurries. He also chipped in two defensive stops. In total, the duo of Uche and Danna combined for 11 total pressures on only 27 combined pass-rush snaps vs. Maryland.

Daniels had a stout afternoon at nose tackle for the Cornhuskers versus Purdue on Saturday. He earned a 71.7 overall grade, top-five at the position in the conference for the week. The big man also made one of the most highlight-worthy plays of the weekend as he intercepted a shovel-pass and had visions of the end zone, coming up just short.

Kemp did his best at controlling the line of scrimmage for the Michigan defense in their 38-7 dismantling of Maryland. He finished with two total quarterback pressures, one sack and one defensive stop in 50 total snaps.

The Illini shut down the Rutgers offense, and Dele Harding was a major reason why on Saturday. He was all over the field, making 11 total tackles while generating six defensive stops in the 38-10 victory. The Illinois linebacker also forced a fumble and came away with an interception in the game. And for his efforts, he earned a spot on PFF’s National Team of the Week after earning a 91.9 overall grade.

Hudson finished as the No. 2 graded linebacker in the conference for the weekend at 78.2 in 60 total snaps. He generated three defensive stops and eight total tackles during his work on Saturday. Hudson was also a menace in pressuring the quarterback in the 38-7 win. He totaled three pressures, including one sack, on only six blitzing opportunities.

Mullen has been a playmaker all season for the Hoosiers and that was no different on Saturday. He finished with the third-highest grade at the position at 76.7 in 40 total snaps. He was lockdown in coverage, allowing one catch on four targets for 18 yards versus Northwestern and added in a forced fumble to his day.

Thomas was only targeted once in Michigan’s cruise-control win over Maryland and didn’t allow the catch to be made. He added two total tackles in 41 snaps for the Wolverines. On the season, Thomas has allowed only 13 receptions on 28 targets in coverage for 147 yards, with two interceptions and two pass breakups.

Green recorded a team-high 14 tackles for the Illini in their 38-10 win over Rutgers on Saturday. He finished with the third-highest FBS grade at the safety position at 87.2, while adding three defensive stops as the Illini kept Rutgers scoreless after halftime.

Burgess earned a 70.4 overall grade for the Hoosiers this weekend while generating three tackles in 45 total snaps versus Northwestern. The safety was targeted four times in coverage and allowed only 17 yards on three receptions in the victory.

Trice was in full lockdown mode in coverage for Purdue this weekend versus Nebraska. He allowed only one catch on four targets in coverage for a measly eight yards and an interception. He also added four tackles and finished as the second-highest graded cornerback in the conference for the weekend. The arrow is pointing up, as this was Trice’s highest-graded game of the season for Purdue (78.0).