Previewing the College Football Playoff Semifinals: How Georgia, Michigan, TCU and Ohio State can advance to the national championship

• Michigan needs to run the ball to victory: The Wolverines will rely on sophomore running back Donovan Edwards to take them to the national title game.

• The Buckeyes must protect C.J. Stroud: The Heisman finalist must be kept clean if Ohio State is to have a chance at upsetting top-ranked Georgia. 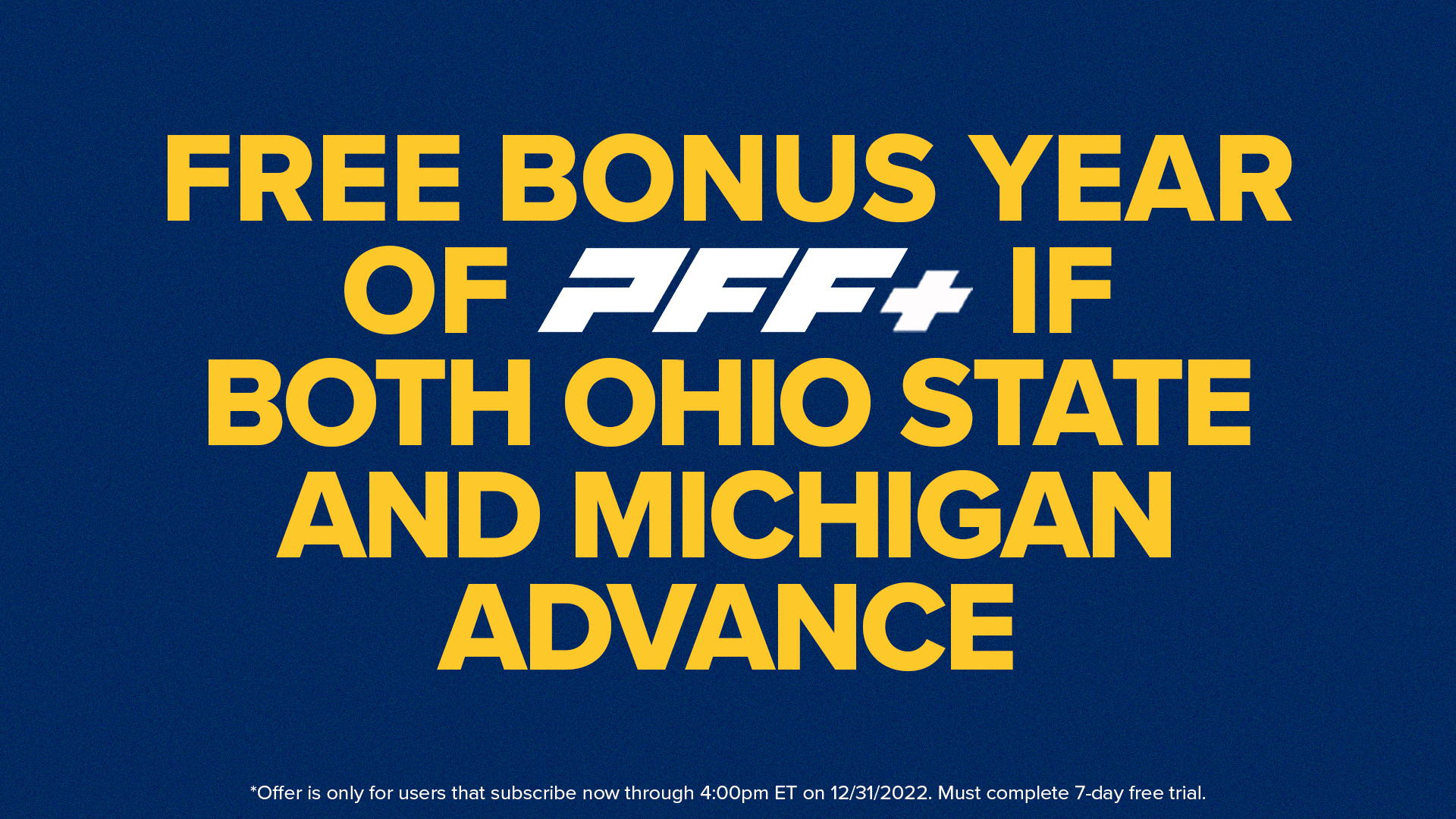 We finally made it.

After five months of buildup, the College Football Playoff kicks off Saturday, Dec. 31, with No. 2 Michigan facing No. 3 TCU in the Fiesta Bowl and top-ranked Georgia taking on No. 4 Ohio State in the Peach Bowl.

Here’s the path to victory for each of those teams.

No. 2 Michigan Wolverines vs. No. 3 TCU Horned Frogs (Fiesta Bowl)

How Michigan wins: Ground and pound

Michigan’s running game is their bread and butter. The Wolverines run the ball on 61.7% of their plays, the third-highest rate in the Power Five.

The star of that rushing attack was junior Blake Corum, whose 95.9 grade leads all players in the country this season. However, Corum is out for the season and will be replaced by Donovan Edwards. A star in his own right, Edwards' 90.8 grade is tied for fifth among Power Five backs with at least 270 snaps.

In Michigan’s two biggest games of the year — the rivalry game against Ohio State and the Big Ten championship game against Purdue — Edwards ran for a combined 401 yards and averaged 8.5 yards per carry.

Texas is the only school with a higher team rushing grade than Michigan’s 95.8.

TCU needs another magical performance from quarterback Max Duggan. Fortunately for the Horned Frogs, the Davey O’Brien Award winner has had plenty of those this season.

Can’t stop thinking about this-

Max Duggan had 95 rushing yards on the game-tying drive.

Duggan’s seven passing touchdowns in the fourth quarter and overtime are tied for sixth among Power Five quarterbacks. The senior’s 99.3 passer rating in the same situations stands eighth among that group.

He’ll face his toughest test yet in Michigan’s defense: The Wolverines' 93.7 team defense grade is second in the nation, and the highest-graded defense TCU has faced this year is Texas' at 89.9, 23rd in the nation.

The Wolverines dominate the Horned Frogs up front and move one step away from the program’s first national championship since 1997.

No. 1 Georgia Bulldogs vs. No. 4 Ohio State Buckeyes (Peach Bowl)

How Georgia wins: Be prepared for a shootout

Georgia still has an elite defense, but it’s nowhere near as dominant as last year. Last season, the Bulldogs had five first-round defenders in the 2022 NFL Draft; their 94.3 team defense grade was the best in the country by nearly two points and was the best mark by an FBS team since 2019.

This season, the Bulldogs have the 15th-highest-graded defense and face the country's top-graded offense in Ohio State. The Buckeyes could very well put up points, meaning Georgia quarterback Stetson Bennett and company must be ready to match them.

The Buckeyes field the third-highest-graded defense in the country, and they rank eighth in terms of expected points added (EPA) allowed per play. Both of those numbers are the best of any of Georgia’s opponents this season.

Georgia’s offense is no joke, either. The Bulldogs’ 93.2 offensive grade is third-best in the country, and they’re top-10 in terms of EPA per play.

Stroud is one of the deadliest quarterbacks in the country when operating from a clean pocket. His 134.7 passer rating when kept clean leads all quarterbacks in college football, while his 32 touchdowns are second in the Power Five. It doesn’t hurt that he gets to throw to the Power Five’s two most valuable wide receivers in Marvin Harrison Jr. and Emeka Egbuka, according to PFF’s wins above average metric.

When Stroud is knocked off his mark, it’s a whole different story. His 34.0 grade under pressure is one of the 15 worst marks among Power Five quarterbacks, as is his 7.8% turnover-worthy play rate under duress. Fortunately for him, that doesn’t happen that often. The Buckeyes offensive line only allows pressure on 10.8% of their pass-blocking snaps, the lowest rate in the country.

The Bulldogs get just enough pressure on Stroud to throw off his rhythm, and Georgia looks to become the first back-to-back national champion since Alabama a decade ago.