In what turned out to be one of the games of the season in college football, Coastal Carolina shut the door on a furious late drive by BYU in Week 14. And as many know, the game was agreed to on the Thursday of game week, so neither team had much time to prepare. But it was still a riveting show between two excellent teams.

Coastal stayed undefeated with the 22-17 win and climbed up to No. 13 in the latest playoff rankings. With the whole country watching, the Chanticleers showed off one of the more diverse and exciting offenses that has been slept on for quite some time. It’s an offense that, due to the success of the team, will be studied and replicated. However, a rushed copy and paste job will not begin to account for the job quarterback Grayson McCall has done as the team’s signal-caller.

The offense, for all intents and purposes, is a triple-option unit. It may look a little different than Army, Navy or Air Force, but Coastal is trying to gain the same advantages against defenses that those three schools are already getting. Instead of being under center and playing with a fullback and two running backs, the Chanticleers are a pistol team with usually one more receiver on the field rather than a true fullback. Speed option, trap, triple option and whatever other favorite concept you like from those service academy schools exist in this Coastal offense.

Against these types of offenses, defenses would love to load the box with as many players as possible and come downfield to make stops in the backfield. Against those three aforementioned service academy teams, defenses have played quarters or Cover 0 on over 67% of their snaps this season. Playing Cover 0 makes sense intuitively. Why play with a safety if the offense isn’t going to try to throw the ball over your head. The so-called quarters looks that these offenses get are similar. Look at the depth of the safeties here for Middle Tennessee against Army. 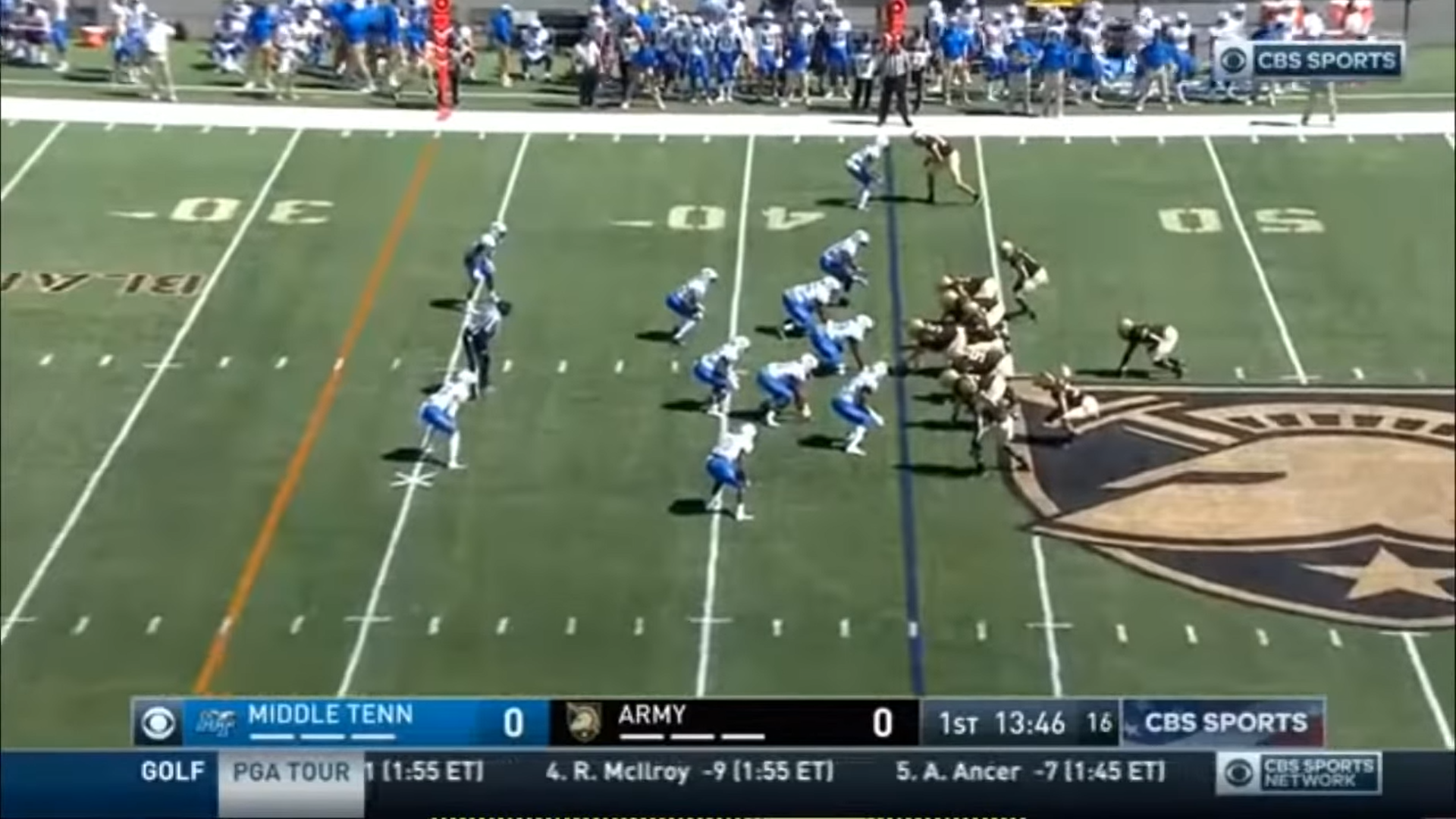 That is quarters, but the safeties will trigger so fast that it essentially becomes Cover 0. This is traditionally what you want to do against triple-option teams. Play with two low safeties as opposed to two high safeties. This alignment gives you a safety on each side of the formation to deal with the actual triple-option play to either side. The safety to the side of the play can come down quickly and “run the alley.”

Because the fullback is lined up directly behind the quarterback, the offense can run the option to either side. So, splitting the field in half rather than playing with one high safety is usually how teams want to play it.

Great. We’ve solved option football. Get everyone down in the box and hopefully have enough playmakers to win one-on-ones or soak up blocks to allow other players the freedom to find and run to the football. The problem, as I’ve alluded to, is how exactly a team can play real pass defense with safeties this close to the line of scrimmage.

Usually, it’s fine because most option teams lack a player who can make all the quick decisions in the run game, have the ability to gain yards if they keep the ball and also continually make plays in the passing game. Those guys are unicorns. You can usually get two out of the three. Grayson McCall checks all three boxes. He is that unicorn.

Coming into the BYU game, McCall was the seventh-highest graded passer among quarterbacks with at least 100 dropbacks in the FBS. McCall’s 92.0 overall grade is far and away the highest mark by a Coastal Carolina quarterback since Jamey Chadwell became the offensive quarterback and then head coach. The next highest is Fred Payton’s 71.9 grade on 97 dropbacks in 2018. That looked promising, but Payton fell to 60.9 in 2019 with more dropbacks.

McCall is legitimately accurate as a thrower. His uncatchable pass rate of only 19.8% on all throws beyond the line of scrimmage is 10th-best in the FBS among quarterbacks with 100 dropbacks or more. He can make any throw on the field. His play has created a monster of an offense for Coastal. Since Chadwell arrived, the offense has improved. In 2017, the team languished at -.04 expected points added per play, but it’s been uphill since then. In 2018, they broke the positive expected points added per play barrier at .03 before improving to .06 last season.

No one could have expected the jump to .15 this season. Most of that has to do with the passing attack, which has given the Chanticleers a ton of explosive plays. The year-to-year improvement in the passing game is even more stark. From -.04 in 2017 to -.03 in 2018 to a respectable .01 in 2019 to all the way up to .41 this season. Just incredible.

This level of quarterback play in a triple-option offense puts defenses in a no-win situation. We don’t see it very often because if you knew you had a quarterback as good as McCall, you probably just wouldn’t run the option as your primary source of offense. BYU found out the hard way that there is no right way to try to defend Coastal Carolina.

A week prior to the BYU game, against Texas State, McCall threw this beautiful out route.

Look at the defense before the snap. They are in that low quarters defense. Coastal could have called a post route for a touchdown, but this play really shows off McCall’s accuracy.

BYU didn’t want this, so they played with two high safeties. It’s already their base defense, so it made sense to them — especially after a short week of practice — to keep playing like that and suppress Coastal’s ability to create big plays downfield. In fact, they did just that. McCall completed only 10-of-15 passes for 85 yards. It would end up being Coastal’s second worse game from a passing efficiency standpoint the whole season.

The problem, of course, was they had no immediate alley players to stop the run from going outside. Coastal got outside the numbers with frequency. Their .02 expected points added per run play was the fourth-highest mark they’ve had all year, and their 50% success rate on runs was the third-highest. It was the worst day BYU’s defense has had on the ground all season.

You can see BYU in its traditional three-down, tite front structure with two high safeties. The Cougars would actually run a lot of Cover 3 cloud rotations in the secondary, but they ended up with two high safeties. The playside offensive tackle is able to arc around BYU’s defensive lineman and make that player the dive read for the quarterback. Since the defensive lineman is aligned inside, he’s going to have to honor the dive portion of the option.

Now, McCall keeps the ball and heads outside. The first linebacker to the playside is responsible for the quarterback. He’s going to force McCall to pitch the ball to the running back and let the alley player make the tackle. Except, of course, there is no alley player.

This happened time and time again:

You can see that the triple option was just the start of BYU's issues. There were some load options and speed options where they still couldn’t deal with Coastal. At one point, they started playing their inside linebacker as the pitch player, but that meant McCall could knife inside and keep the ball himself.

Staying in two-high to stop the pass was probably the smart decision overall from BYU, but the defense was still repeatedly gashed on the ground with the ball getting outside often. Coastal stays unbeaten because its offense keeps defenses guessing wrong.

The scheme is sound and fun, but it all starts with the elite play of quarterback Grayson McCall, who is quite possibly having the best season by an option quarterback that we’ve ever seen. The Chanticleers have a chance to win their first-ever Sun Belt title this weekend in only their fourth season in the FBS. And the future will stay bright with at least one more year of McCall as the pilot of the Chanticleers' formidable offense.