Matt Araiza is in the midst of one of the greatest punting seasons in college football history. The San Diego State Aztecs junior is the favorite for the Ray Guy Award for the nation's top punter, thanks to a cartoonishly strong left leg and never-ending enthusiasm and work ethic. He’s also on pace to break numerous college records, including the net average yards per punt and punts inside of the 20 in a season. He’s done all of this while manning the kickoff and field-goal duties for the Aztecs.

Araiza’s immense success this season offers an avenue to investigate and discuss just how valuable flipping the field is, along with the value of a special teams player such as himself.

The central value of punts is how they affect the opponent’s starting field position — the farther an offense starts from the end zone, the fewer points they’ll score on average. Therefore, to get a specific number for the value of an individual punt, we will be fitting a general additive model (GAM) to determine the expected points of a drive strictly based on starting field position.

This gives us a solid framework for evaluating specific punts, but it leaves something to be desired when it comes to evaluating individual punters. Coaching decisions can affect these types of statistics. For example, Punter A plays for a team that cowardly punts around midfield, but Punter B plays for a team that only punts from its own 20. We can expect Punter A to pin the offense deeper than Punter B. Thus, we need to account for these variables by creating an expected kick distance from which we can translate an expected starting field position and thus into expected points.

We will call this value Subtracted Punt Points (SPP). So how does Araiza stack up within this framework? 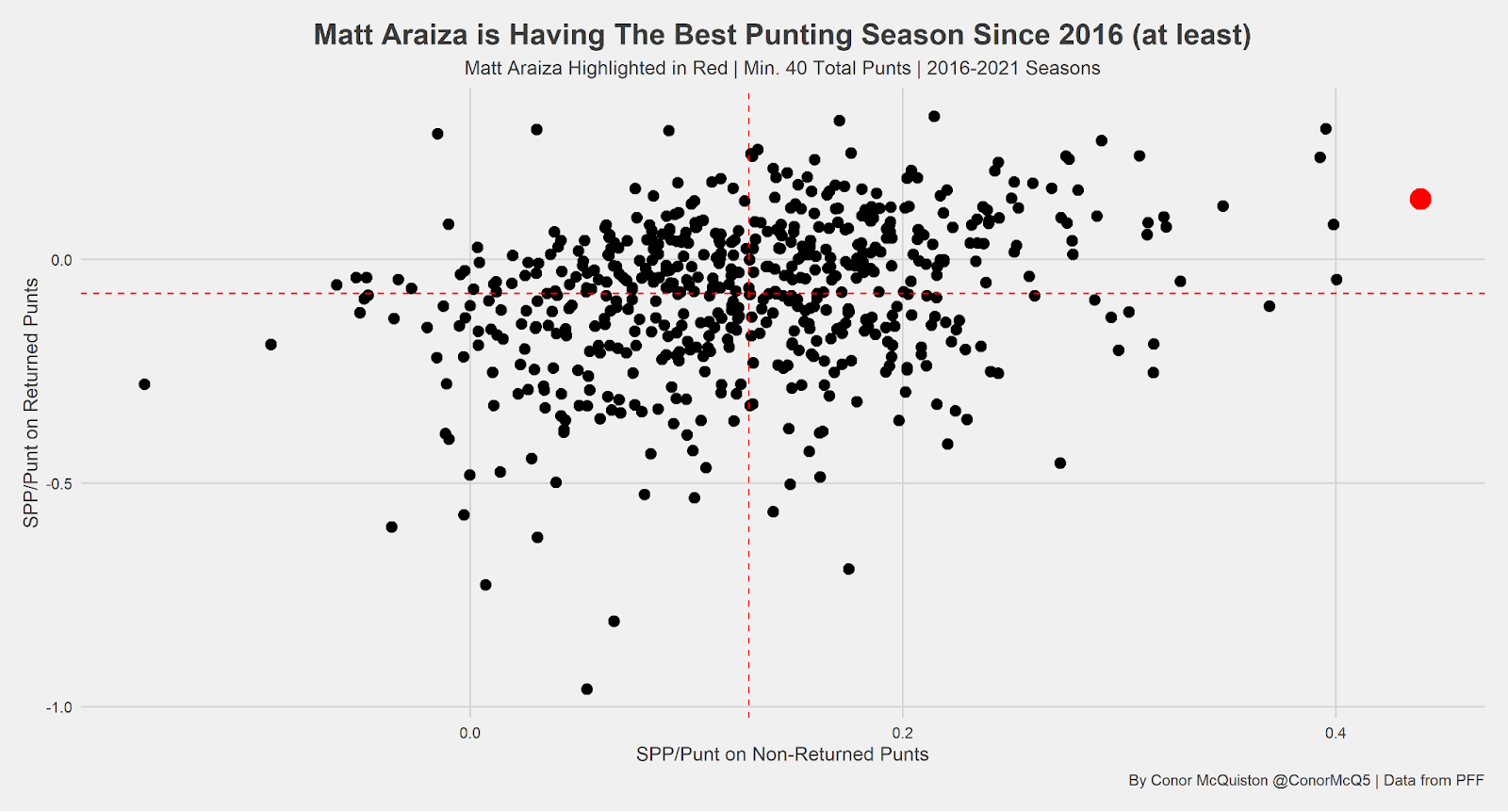 We separate SPP per punt by returned and not-returned kicks because returned punts have significantly more noise due to the influence of the coverage team. Punters can still affect this by not outkicking their coverage, but they still rely largely on their teammates.

Regardless, when Araiza has avoided a return on his punts this season, he has cost opponents roughly 0.44 points in starting field position on average. This number is absolutely bonkers — the best mark we’ve seen since at least 2016. 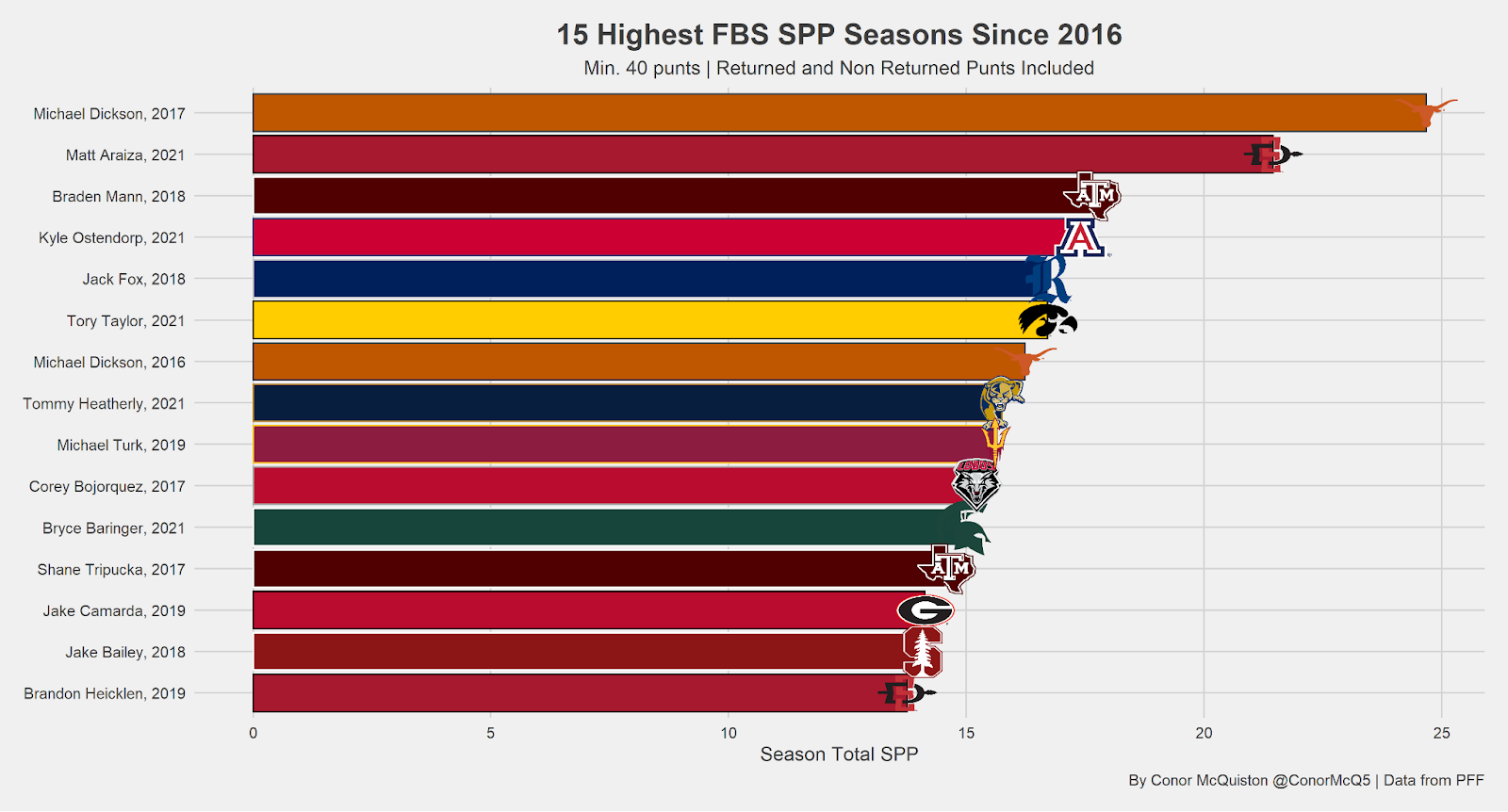 When evaluating individual seasons, it is sometimes useful to look at total volume. In this regard, Araiza is also a massive standout with 21.5 total SPP — the second-most since 2016 behind Michael Dickson’s 24.7 in 2017 for the Texas Longhorns.

Dickson accumulated this number over 84 punts that season, 22 more than Araiza has executed this season. An additional piece of context is how this number is slightly deflated by Araiza outkicking the coverage on one singular punt against the Utah Utes, resulting in a punt-return TD, which cost him -3.3 SPP. So Araiza is a single punt-return TD off Dickson in volume despite 22 fewer punts.

Related content for you: College Football Defense Rankings: Top 10 units ahead of Week 12 via Anthony Treash

This story remains true on non-returned punts, where Araiza has 18.9 SPP, which is second since 2016 to Dickson’s 20.7, again on 24 fewer punts. Araiza has saved roughly three touchdowns for a tremendous SDSU defense three-quarters of the way through the season. 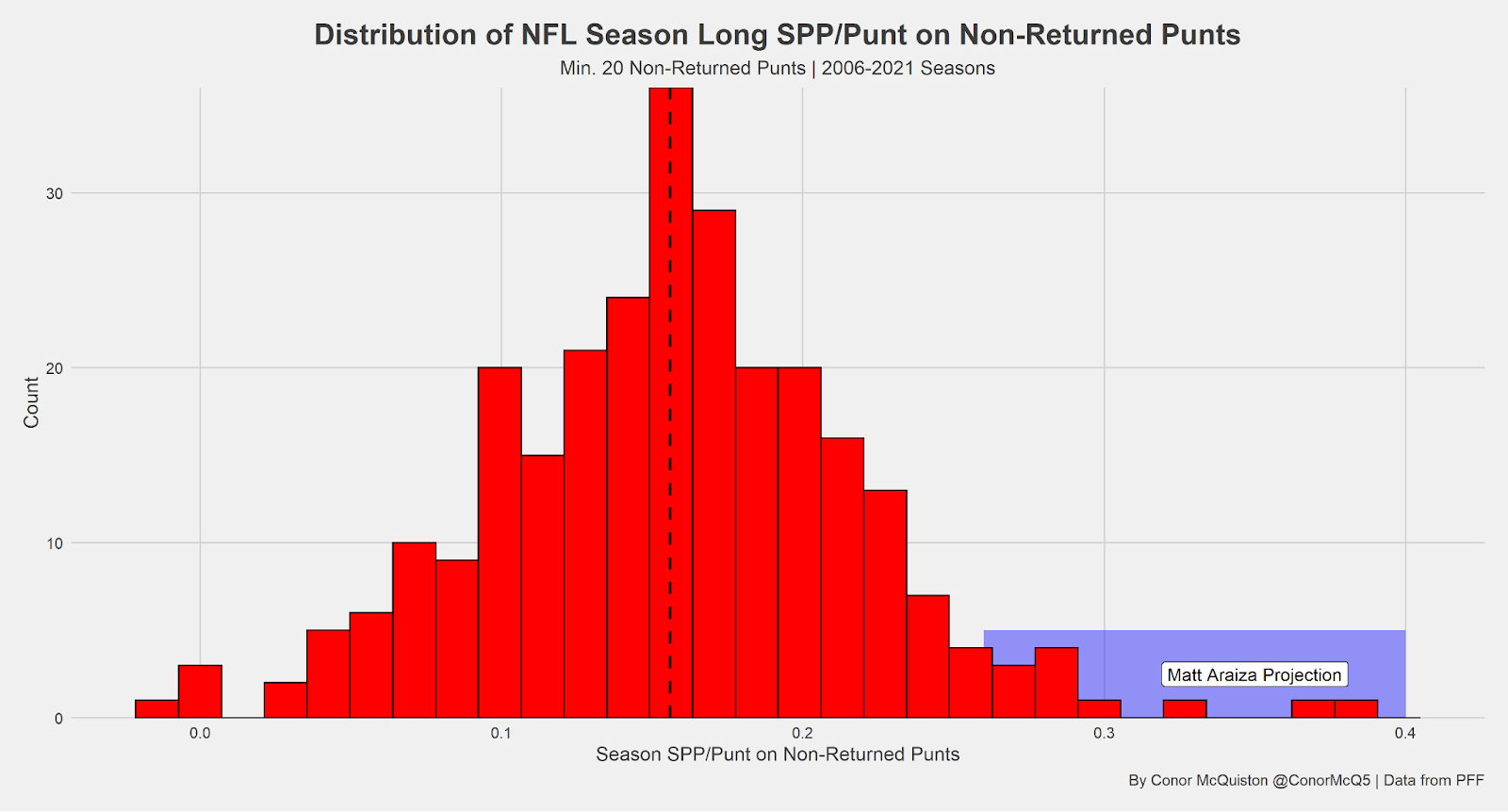 Unfortunately, we lack a large enough sample of college-to-pro punters to make a reasonable projection of Araiza’s performance at the next level. In lieu of this, we’ll make an optimistic assumption that Araiza’s work ethic and talent will take him far enough that in his prime, he will routinely be in the top 5% of punters in the NFL.

In other words, if Araiza were to end up as a top-5% punter in the NFL, we would expect him to save his team roughly two touchdowns per season strictly on punts that were not returned.

It is outside the scope of this analysis to translate two touchdowns per season to a proper draft position. But it is hard to imagine a Day 3 pick who would have the reasonable expectation of single-handedly preventing two scores over the course of a season.

Of course, if Araiza could pull double duties for an NFL team as a placekicker and punter, this would increase his value as he could save a roster spot for the team. Unfortunately, his 61.9% field goal percentage this season ranks 69th out of 73 kickers with at least 15 field goal attempts. His big leg allows the coaching staff to attempt longer field goals, which deflates his average, but he still only makes 3.35% more of his field goals than expected when accounting for the difference. That figure ranks a pedestrian 41st out of 73 qualified kickers.

Araiza is an accomplished kickoff specialist, having handled that role for the Aztecs since 2019. Seventy-eight percent of his kicks have gone unreturned over that time, which is 10th out of 230 kickers with at least 75 career kickoffs. This is not particularly valuable due to the lack of variance in NFL kickoffs and the direction the game is headed.

Araiza is an exceptional, hardworking athlete in the midst of the greatest punting season in at least the past six years. Looking ahead in his career, he projects to be an extremely valuable weapon for his future NFL team, generously projecting to save them two touchdowns a season just off his left foot.