The Week 6 SEC Eckrich Team of the Week powered by PFF saw some impressive performances and, of course, the strength of opponent also factored into the overall selections as did the PFF player grades. 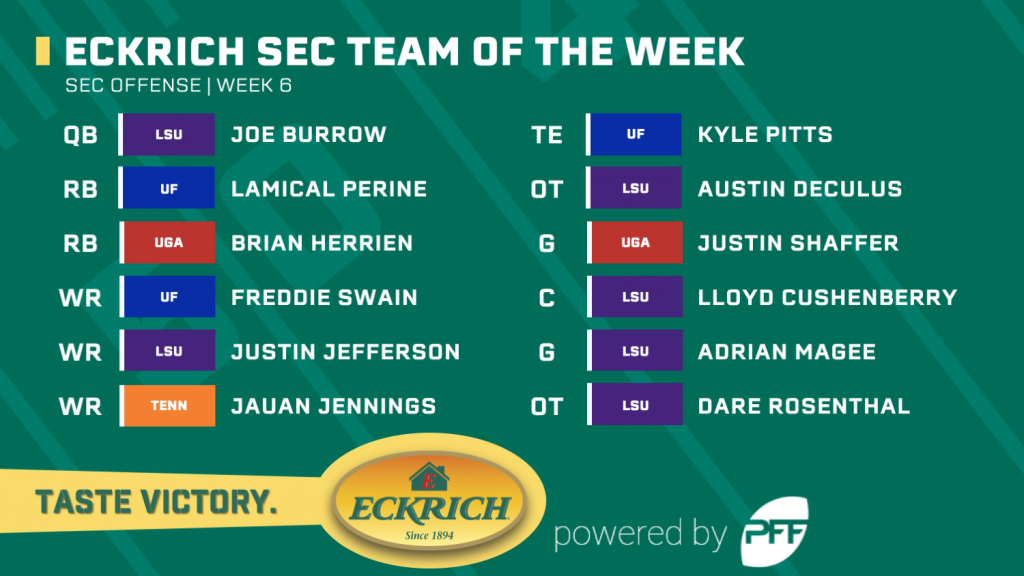 The standout signal-caller had himself yet another dominant game at the helm for LSU, completing 27-of-38 attempts for 341 yards, five touchdowns and one interception in his Week 6 victory over Utah State. He was lights out throwing down the field in this one, as three of his completions and 101 of his passing yards came from passes that traveled at least 20 yards in the air.

Perine churned out 130 rushing yards on 14 carries in Week 6, and 121 of those yards came after contact.

Herrien carried the ball 11 times in his Week 6 game against Tennessee, and he churned out 88 yards, 74 yards after contact, five first downs, one touchdown, one run of 10-plus yards and two forced missed tackles on the day.

Swain was electric with his ball in his hands on Saturday. Targeted nine times, he caught six passes for 146 yards, with 80 of those yards coming after the catch, equating to an average of 13.3 yards after the catch per reception.

The LSU wideout caught 9-of-11 targets in Week 6, racking up 155 yards, two touchdowns and four additional first downs in the process. All told, he generated a perfect passer rating of 158.3 when targeted.

Jennings did drop one of his nine targets in Week 6, but that was his only blip of the day. He recorded seven receptions for 114 yards and a score against Georgia, with 44 yards and five forced missed tackles coming after the catch.

The Florida tight end caught eight of his 12 targets against Auburn in Week 6, and he turned those targets into 64 yards, 30 yards after the catch and two first downs.

Deculus did allow three hurries from his 41 pass-blocking snaps, but he was an absolute force in the run game. He earned a 78.4 run-blocking grade for his efforts — the fourth-best mark among all offensive tackles in Week 6.

The Georgia guard was a force to be reckoned with as a pass-blocker this week. He didn't allow a single pressure on any of his 32 pass-blocking snaps, and he ended the game with an 86.3 pass-blocking grade.

Cushenberry allowed just one pressure on 44 pass-blocking snaps this week, and he was the only center in the SEC to record a run-blocking grade over 65.0. 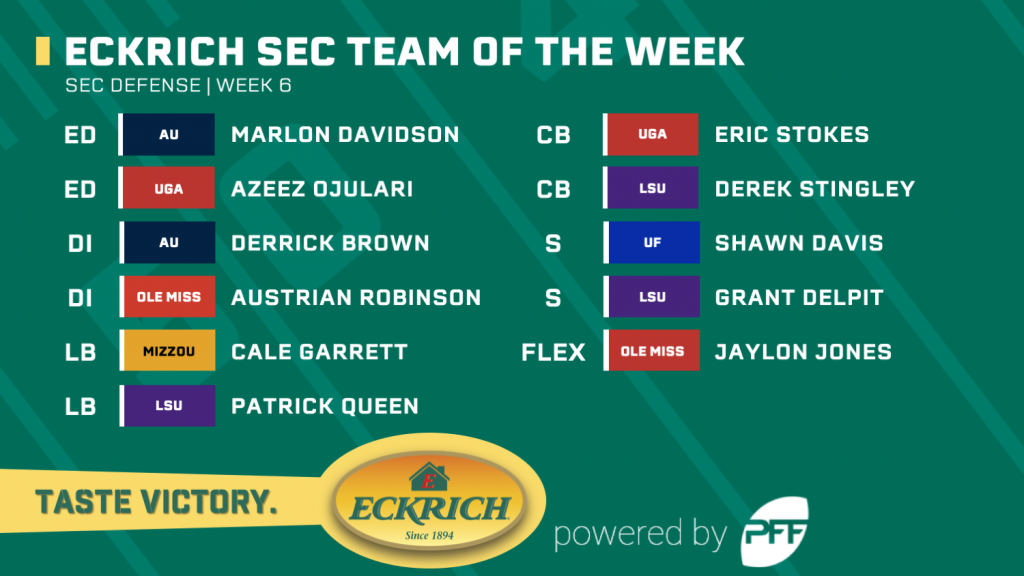 Davidson wreaked havoc on the Florida offensive line in Week 6. He recorded one sack, one hit and five hurries on 27 pass-rushing snaps, and his 92.2 pass-rushing grade led all SEC edge defenders by almost 10 points.

Ojulari produced two sacks, one hit and four hurries on his 22 pass-rushing snaps against Tennessee, leaving the game with a 79.3 pass-rushing grade.

Brown earned high grades across the board in Week 6, but he was at his best as an interior pass-rusher. He produced five total pressures on 37 pass-rushing snaps and ended the game with an elite 91.7 pass-rushing grade.

Robinson earned grades of at least 75.0 as a run defender, as a tackler and as a pass-rusher in Week 6. He recorded six total pressures across his 24 pass-rushing snaps and added a defensive stop against the run for good measure.

Garrett shined bright in coverage against Troy in Week 6. While he did allow two receptions in coverage, those receptions went for a grand total of -6 yards, and he ended up picking off two passes on the day.

Another standout performance in coverage earns a spot on the Eckrich SEC Team of The Week. Patrick Queen's coverage stat line is an impressive one: He allowed four catches from four targets for a total of -12 yards, and he left the game having recorded a whopping six defensive stops.

Targeted eight times in coverage against Tennessee, Stokes allowed just one catch and broke up two passes, allowing just 0 yards into his coverage on the day. He capped off a wildly productive day against the pass with a sack from his lone pass-rushing snap, topping off an excellent all-around outing.

The LSU cornerback allowed just two receptions from six targets in coverage and gave up 26 receiving yards and a passer rating of just 8.3.

Davis recorded two solo tackles and one defensive stop in his Week 6 game against Auburn, and he intercepted one of the two passes that were sent into his coverage on the day.

Delpit was kept on his toes at the back end of the defense in Week 6, and he saw three targets into his primary coverage. He allowed just one catch for eight yards and recorded an interception to cap off an excellent all-around performance.

The Ole Miss cornerback allowed just one catch from six targets in coverage, and the only reception he did allow made it as far as the line of scrimmage. Jones ended a mightily productive game having allowed a passer rating of just 39.6 on throws into his coverage.