As you saw this past weekend in the much-hyped and high-scoring matchup between LSU and Alabama, now, more than ever, quarterback play is the primary determining factor in a team’s offensive performance and the game’s ultimate outcome. Thus, this week, we focus on the PFF Top-25 and give observations using PFF’s signature stats about each team’s signal-caller.

The clear Heisman front-runner, Burrow can do no wrong in 2019. No matter the PFF metric, Burrow is at or near the top of the list. His accuracy has probably been the most impressive, as he leads all FBS quarterbacks in accurate-throw rate (75.3%) and “accuracy plus” (perfect ball placement) percentage. 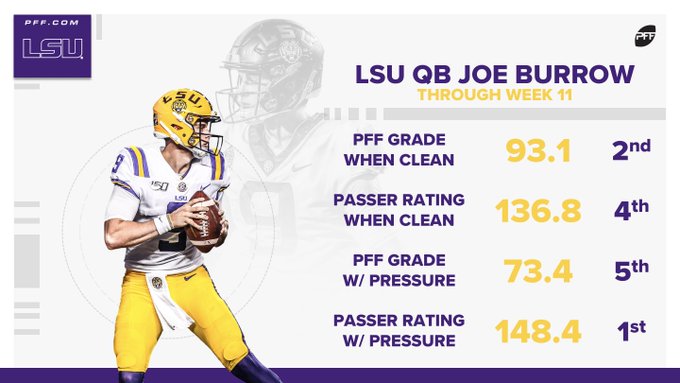 Fields has been everything Buckeye fans hoped he’d be and more, and he currently has the second-highest passing grade behind Joe Burrow and the top passing grade from a clean pocket. Fields has also done a lot of his yardage damage (1,897 yards passing) himself, with 71.6% of his yards coming in the air, the second-most in the FBS. Lastly, despite this being his first season as a starter, Fields leads the FBS in passing grade on third down at 95.3, with zero turnover-worthy plays.

Fromm has taken a leap forward in 2019, with his current overall and passing grade both being career highs. There’s an interesting dichotomy with him this year, however. His accuracy percentage (in terms of ball placement) of 57.7% is 39th in the FBS, but his “accuracy plus” percentage is second in the FBS behind Burrow. Thus, while he hasn’t been as on point as he was in 2018 (accuracy percentage was second in FBS), he is making perfect throws at a rate only behind Joe Burrow.

Even though we at PFF have known who he is for a while, the rest of the college football world was introduced to Tanner Morgan this past weekend in the Gophers' victory over the next team on this list, Penn State. Morgan has especially thrived under pressure, as his 118.6 passer rating when pressured is third-best in the FBS.

Clifford did his best to stave off the upset by the Gophers last weekend, as his 80.5 game grade was his second-highest in 2019. Clifford, unfortunately, has not had the most help this season, with the 23 drops and an 8.8% dropped-pass rate that's currently the ninth-highest in the FBS.

Patterson has taken a step back in 2019, with his current overall and passing grade being lower than his sophomore season at Ole Miss. One area, though, where he has not struggled is in the deep passing game. On throws over 20 yards, Patterson has a 90.6 grade, nine big-time throws and only one turnover-worthy play.

Needless to say, Hurts’ transfer to Oklahoma has benefited both him and the Sooners. Hurts has been accurate and dynamic, both in the passing and running games. He’s been at his best from a clean pocket, as his 152.3 passer rating and 81.3 completion rate are both tops in the FBS.

Herbert has put together a fantastic senior season and has the Ducks firmly in the playoff race. His passing grade is fourth-best in the FBS, and he’s been more accurate this year, as his adjusted completion percentage would tie his 2017 career-high and be a big improvement from 2018, while he’s also cut down on his mistakes, with only five turnover-worthy plays thus far. 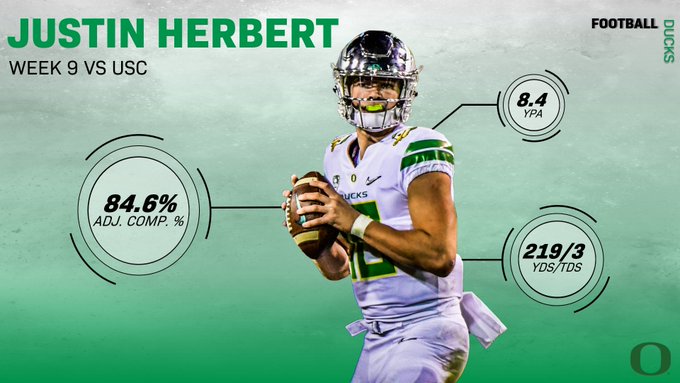 Huntley is having a very low-key fantastic season. His passing grade is seventh-best in the FBS, and he also tops the FBS in deep passer rating. Huntley is also second in the FBS is adjusted completion percentage and passer rating under pressure. The under-pressure rating is impressive, considering he’s been pressured on 41.6% of his dropbacks. However, as a credit to his ability, Huntley has only been sacked on 7.6% of his dropbacks, fifth-best in the FBS.

Trask has shown ability in his time at the helm since Felipe Franks was lost for the season, especially from a clean pocket. In that situation, Trask has an 85.0 passing grade and 79.4 adjusted completion percentage. However, Trask has also been prone to turnovers. His 11 turnover-worthy plays are the 11th most in the FBS, despite only having 288 dropbacks.

Book has been the same player in 2019 as he was in 2018, as his overall and passing grade are, in essence, the same as they were a year ago. However, he still continues to be a threat as a runner, which he definitively showed this past weekend against Duke. For the season, Book has 12 runs of 10 or more yards, and he has generated 25 total first downs with his legs.

In his third season as the starter, Stanley has been a consistent leader. The Hawkeyes’ three losses are only by a combined 14 points, and Stanley has got better as the season has progressed. Over his past three games, Stanley has a 78.4 passing grade, six big-time throws and zero turnover-worthy plays. That will need to continue if the Hawkeyes want to upset undefeated Minnesota this weekend.

This is now two straight years Brewer has been a highly graded quarterback. While not quite at his 91.3 overall grade from a year, Brewer has delivered the throws when it matters most as Baylor gets set to host its biggest game of the season this week against Oklahoma. When pressured, Brewer’s adjusted completion percentage of 72.7 is the eighth-best in the FBS.

Ehlinger has improved his accuracy each season for the Longhorns, and especially in regards to high-level ball placement. His “accuracy plus” percentage is the third-highest in the FBS, behind only Jake Fromm and Joe Burrow. He’s also been lethal on intermediate throws (10-19 yards), posting a 92.9 grade on those throws (seventh-best), including eight big-time throws.

Mond has been good, not great again for the Aggies in 2019, as he has finished only one game, the opener against Texas State, with a grade above 80.0. One area Mond and the Aggies do not attack is deep. Only 9.8% of Mond’s attempts are over 20 yards, and his adjusted completion percentage on those throws is just 37.9%.

Eason has taken great strides forward in 2019, showcasing his NFL-level arm talent and also improving his accuracy. Interestingly, and possibly a function of his arm talent, in both his freshman season at Georgia and this year at Washington, he has dealt with drops. He had 29 passes dropped in 2016 (13th most in the FBS) and already 26 drops this year, which is currently the fourth-most in the FBS.

Until his recent injury issues, Bryant had been putting in a solid graduate transfer season. Through the season’s first eight weeks, Bryant had a 74.4 passing grade before struggling against Vanderbilt and Kentucky and not being able to play against Georgia.

Pickett has been solid for the Panthers despite being one of the most heavily pressured quarterbacks in the nation. Pickett has been pressured on 40.9% of his dropbacks so far, but he's only been sacked on 13.1% of those dropbacks.

While not quite the 89.3 overall grade he put up as a freshman, Purdy has still been excellent for the Cyclones, particularly on play-action. Purdy’s 89.3 passing grade on play-action is good for sixth-best in the FBS, and he has 10 big-time throws and only two turnover-worthy plays off play-action. 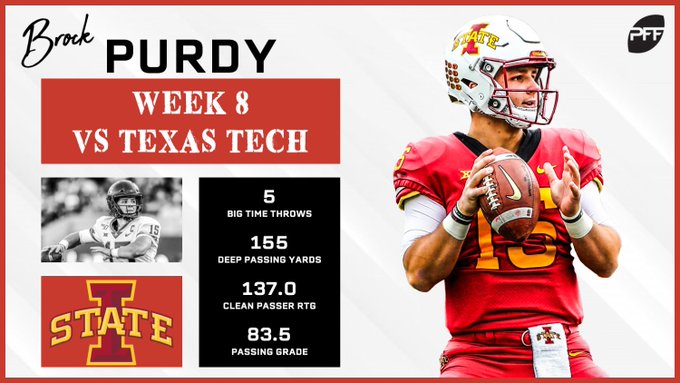 White and the Tigers are certainly not afraid to chuck it deep, especially considering how good White has been on those throws. His 135.4 passer rating on throws over 20 yards is tied for second nationally with Joe Burrow. He’s also been putting a lot of throws on the money, as his overall ‘accuracy plus’ percentage is ninth-best in the FBS.

Perkins, like Kenny Pickett above, is another quarterback who’s been under pressure a lot, on 40% of his dropbacks to be exact. Those pressures are turning into sacks or throwaways, unfortunately. Perkins has been sacked 37 times, second-most in the FBS, and also has the sixth-most throwaways (18).