The dust has settled on the 2019 regular season at the FBS level and it's time to take a look back. Ahead of the Mountain West championship, we take a look at the best players at their respective positions with an in-depth look at how they graded over the course of the full season.

Utilizing our play-by-play grades of every player on every play of every game, our All-Mountain West Team takes into account every player's actions on the field on Saturdays while also utilizing our wealth of signature statistics to determine the list. The strength of opponent and consistent play also factor into our selections detailed below. 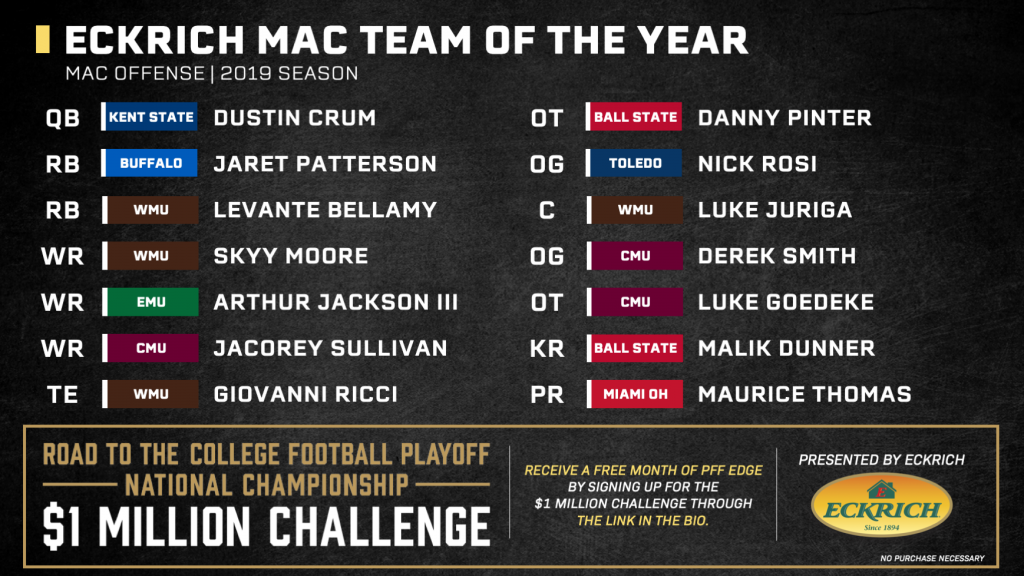 Among the 10 Mountain West quarterbacks with 200 or dropbacks this season, Love ranks first in PFF passing grade (87.1). He currently owns a 71.4% adjusted completion percentage with a conference-high 26 big-time throws.

Williams ranks second behind Air Force running back Timothy Jackson among the 15 Mountain West backs with 100 or more carries in PFF rushing grade at 78.5. The UNLV back also leads the conference in forced missed tackles (50) and ranks fifth in yards after contact per attempt (3.2).

Valladay ranks fourth in PFF rushing grade (77.9) among the qualifying Mountain West backs. He’s recorded 1,067 yards from 225 attempts and forded 27 missed tackles along the way. He also averaged 3.1 yards after contact per attempt, ranking sixth in the conference.

Jackson ranks right behind Sanders in PFF receiving grade (89.2) among qualifying Mountain West wide receivers. He has caught 77-of-120 targets for 1,119 yards, 49 first downs and eight touchdowns so far this season. He’s also hauled in 17-of-33 contested targets and recorded 27 receptions of 15-plus yards.

Walker has handled a heavy workload at San Jose State quite well. The 5-foot-11, 180-pound wideout has earned an 85.5 PFF receiving grade while catching 79-of-116 targets for 1,161 yards, 51 first downs and two touchdowns. He’s also caught 17 of his 36 contested targets and averaged 2.74 yards per route so far this year.

McBride leads all Mountain West tight ends with 500 or more offensive snaps in overall grade (82.5), PFF receiving grade (85.0) and PFF run-blocking grade (81.3). The 6-foot-3, 245-pound sophomore has been the complete package for the Rams this season.

Hattok was a mauler in the run game this season, leading the Mountain West guards with an elite run-blocking grade. When the Falcons did drop back to pass, Hattok was equally as dominant, allowing just two total pressures on 127 pass-blocking attempts this year.

Like his teammate, Laufenberg dominated in the run game with a near-elite run-blocking grade. Also like Hattok, Laufenberg also had great games in pass protection and allowed just seven total pressures on his 128 pass-blocking snaps.

Dominant in all facets, Ismael was the only center in the conference to field pass- and run-blocking grades above 70.7, as he led the way with an 88.2 grade in pass protection and an 80.8 in the run game. He gave up all of five pressures this season on his 436 pass-blocking snaps and had a 10.0-point advantage over the next closest center in run-blocking grade.

Hensley led the way with an elite pass-blocking grade for the Warriors, allowing just six total pressures on his 457 total snaps in pass protection. He also had great grades in the run game as well, as he rounded into form all throughout the season and turned into one of the Mountain West's best guards.

A mainstay on our Mountain West Team of the Week, Cleveland led the way with an elite pass-blocking grade, allowing just 10 pressures on a whopping 424 pass-blocking snaps. He paved the way to some wide-open rush lanes, too, and was one of just two tackles in the conference to field grades of at least 76.6 in each facet. 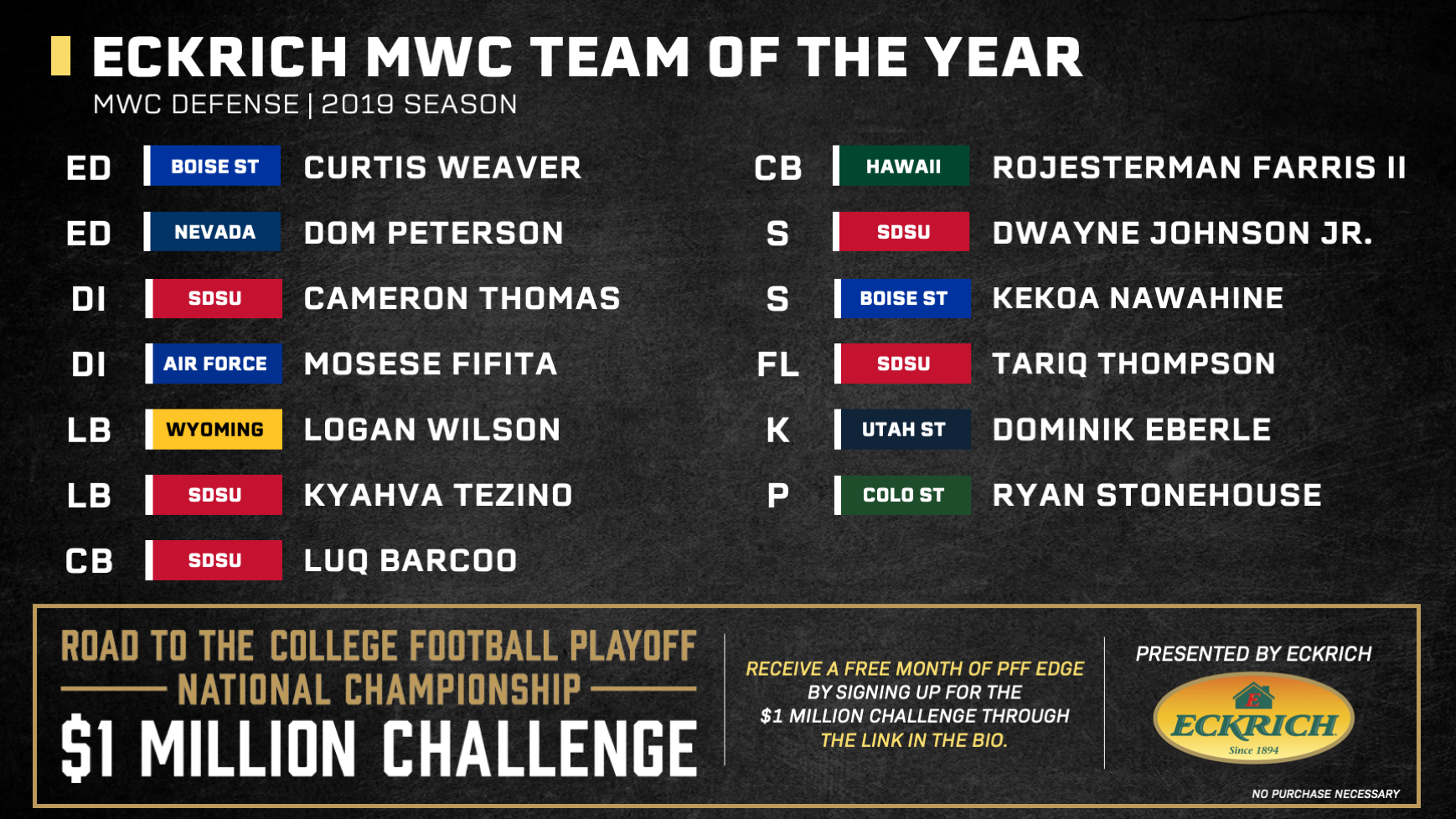 One of the nation's finest pass-rushers, Weaver dominated against Mountain West play and recorded a pass-rush triple-double once again this year. He brought down 15 sacks, 13 QB hits and 31 more hurries, leading all MWC defenders with 59 pressures. His 30 defensive stops were the second-most among edge defenders, and he even chipped in with an interception and two pass breakups on just 83 snaps in coverage.

Peterson was dominant along the edge for the WolfPack, finishing the season with 35 total pressures that saw him accrue seven sacks, two QB hits and another 26 hurries. He was at his best against the run, bringing down 18 run stops and the conference's second-highest run-stop percentage (7.9%).

No interior defensive lineman was able to accomplish quite what Thomas did in the Mountain West this year, as he led the way with 34 total QB pressures and chipped in with another 19 stops against the run. He led all defenders on the interior with an elite overall grade and won his pass-rushing attempts more often than not.

Fifita was dominant against the run for the Falcons in 2019, totaling a 7.6% run-stop percentage and 21 total run stops. By chipping in with 21 total QB pressures that included six sacks, five QB hits and another 10 hurries, Fifita was a true three-down lineman who required planning around for Air Force opponents.

Wilson stands as the only linebacker in the country with grades of at least 85.0 or higher in run defense, tackling and in coverage, fielding elite marks in all three facets of play. He blitzed the passer just 50 times and still recorded 17 pressures, while he recorded 50 total defensive stops and recorded four interceptions, leading all conference linebackers with a total of nine plays on the ball.

Regularly grading extremely well in his career, Tezino finished the 2019 regular season with his third consecutive elite overall grade. He recorded 38 total pressures to lead all Mountain West linebackers while bringing down 46 defensive stops and limiting receivers in his coverage. He didn't allow a single touchdown in his coverage on 298 snaps against the pass, recording an interception and two pass breakups in the process.

The country's leader in interceptions, Barcoo allowed just 44.9% of the 89 targets thrown his way to be caught, and he limited receivers extremely well after the catch. He made eight picks and broke up another 13 passes while allowing just a 35.1 passer rating into his primary coverage. Chipping in with 15 defensive stops and 47 solo tackles, he did all of that with just four missed tackles to his credit.

Farris was terrific in coverage and finished with a top-five coverage grade among all qualified Mountain West cornerbacks, as he limited quarterbacks to just a 55.4% completion percentage into his coverage. He was as sure a tackler at the cornerback position as anyone in the country, finishing with just two missed tackles on his 51 total attempts.

With terrific grades in coverage, Johnson Jr. was every bit of a lockdown safety across the middle when he was tested. He allowed an average reception of just 7.1 yards, by far the lowest among all safeties in the conference. He made four plays on the ball and also recorded 24 total defensive stops and 61 solo tackles, as he was a missile to the football for the Aztecs.

Nawahine excelled in coverage just like his counterparts on the All-Mountain West Team, allowing all of 55 total yards after the catch into his coverage. He saw a completion percentage of just 40.7% on targeted passes and recorded two interceptions in the process. In total, he saw just a 57.9 passer rating when he was the primary coverage defender.

Thompson was stellar against opposing passing attacks this year, allowing a reception longer than 28 yards just once. He allowed just one touchdown in his coverage, and that came early in the season against UCLA as he actually allowed fewer than 35 yards in coverage in five of his final seven games in 2019. He chipped in as well with another 20 defensive stops and three interceptions to go with five more pass breakups this year.

A perfect 40-of-40 on his extra points this season, Eberle was as reliable as they come in tacking on the ‘gimme' point at the end of a scoring drive. He also knocked home 6-of-9 field goals of at least 40 yards and was automatic from within 40, making 13-of-13 kicks from inside 39 yards.

Averaging near 4.00 seconds of hangtime is one way to help your net punt average, as Stonehouse led the conference by averaging 44.5 net yards per attempt. He punted 49 times for 2,274 yards and allowed just 93 return yards while pinning opponents inside their own 20-yard line on 17 occasions.

Scarver was the Mountain West's highest-graded kick returner by some margin, thanks in part to his two kick return touchdowns and long return of 107 yards. He averaged 29.1 yards per return on 20 attempts, gaining a total of 582 yards in the process.

Among the nation's best on punt returns, Williams torched opposing punt coverage units to the tune of a 13.0-yard average return. He scored two punt-return touchdowns and had 259 yards on 20 returns, with 17 fair catches and no muffs.