The ACC has had its fair share of ups and downs to start the 2018 college football season. From an opening game loss on the national spotlight from Miami (to LSU) and Louisville (to Alabama), the ACC was deemed Clemson's to lose after Week 1. Still, impressive performances have been plentiful and some surprise stars have begun to shine brightly.

QB Ryan Finley has led the NC State Wolfpack to an undefeated start as he is one of the conference's biggest stars through the first half of the season.

The PFF Midseason All-ACC Team is brought to you by Eckrich, the Official Smoked Sausage of the College Football Playoff.

Headlined by Finley and some strong defensive players, here are the Midseason All-Conference players at every position: The ACC's top-graded passer is also the top-graded player overall as Finley has pushed NC State to a 5-0 start. He hasn't let pressure affect him much, fielding the ACC's top passer rating under duress at 99.2.

Etienne was selected to our Midseason All-American Team on the heels of his 23 runs of at least 10 yards, which are the most in the conference. He averages a healthy 4.08 yards after contact per rush this season.

Dillon is second in total rushing yards in the conference this season and despite injuries here and there, still is tied with Etienne with 25 missed tackles forced on carries.

One half of the NC State receiving duo represented here, Harmon has brought down 33 receptions this season as 26 of them have either moved the chains for a first down or been a touchdown.

Meyers joins his teammate here on the back of four missed tackles after the catch and another 17 first downs on his 30 receptions.

Thomas has been dynamic when targeted, averaging 23.6 yards per catch and gaining 5.8 yards after the catch per reception. He's had just 20 of his 30 total targets be deemed catchable so with better accuracy, could see even bigger numbers this season.

Jordan leads conference tight ends with four touchdowns and 208 receiving yards as he's impressively racked up 130 yards after the catch this season.

Sweet is the conference's top-graded offensive tackle has impressed mainly in pass protection. On 199 pass-blocking snaps, he has allowed just five hurries and no sacks or hits.

Prescod may be the ACC's best offensive lineman this season and also may be the most well-rounded. He holds the conference-best 90.6 run-blocking grade and the second-best pass-blocking grade (90.5) among any position.

The NC State offensive line is making their claim for best in the nation and Bradbury is certainly part of that. The highest-graded center by a mile in the ACC, Bradbury also was named to our Midseason All-American Team earlier this week.

Dintino has done his best work in pass protection, allowing just two total pressures on his 188 pass-blocking snaps. No slouch in run-blocking either, he has also fielded a 77.6 run-block grade, third among guards.

Improving on his solid debut season a year ago, Becton has been a shining light on a dismal season for Louisville. While he has allowed 15 total pressures this season, he's impressed in run-blocking, currently holding the conference's highest run-blocking grade (73.6) among tackles. 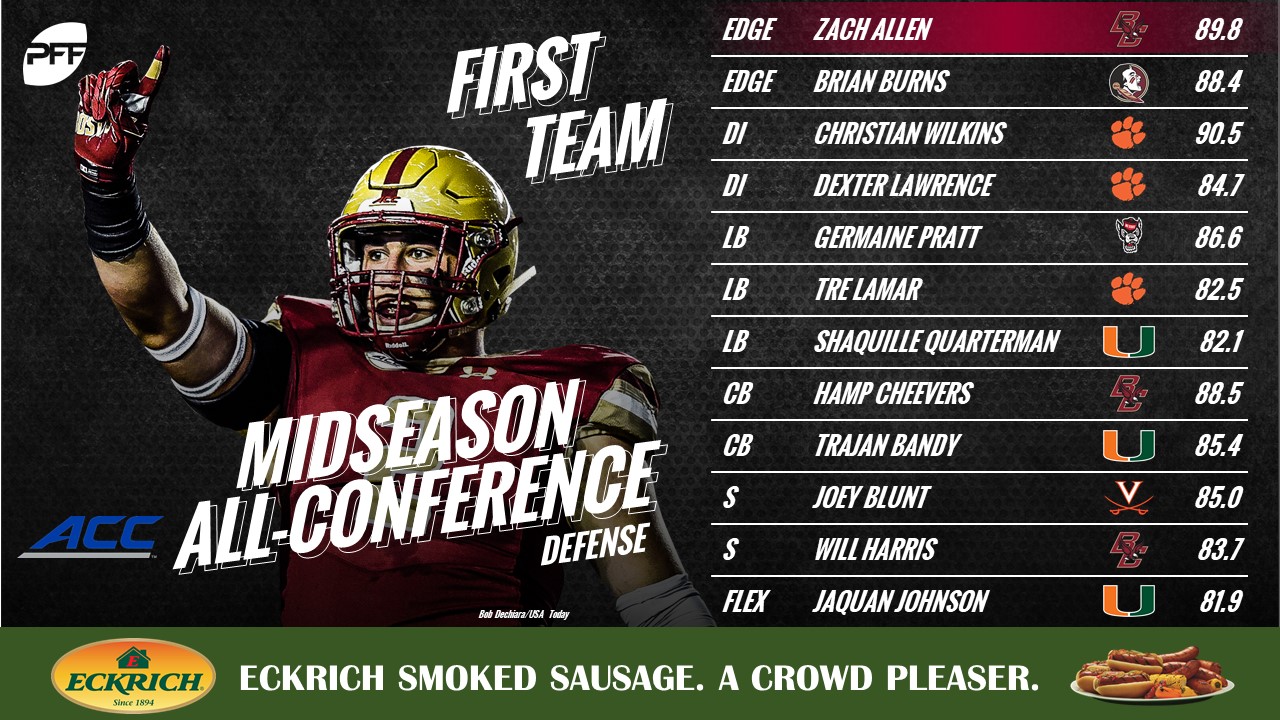 Speaking of Midseason All-American team, Allen found his way on that list on the heels of an impressive start to 2018. He leads the conference with 13 combined sacks and hits leading to 32 total QB pressures.

Wilkins joins his teammate here, impressing in run defense once again this year. He has recorded 17 total defensive stops, 15 of which have come against the run, good enough for the highest 14.6% run-stop percentage.

Opposite his teammate Wilkins, Lawrence is tied for sixth in the conference with 15 total QB pressures, doing so on just 92 pass-rushes. He may not have the sack totals of others, but he's racked up five QB hits to lead the conference's interior defensive linemen.

The lifeblood of the NC State defense, Pratt has been strong in all facets of play at linebacker. He has recorded 11 pressures on 31 blitzes, 19 total defensive stops and has not allowed a touchdown in coverage.

Lamar has exceeded expectations against the run this season, Lamar has brought down 18 defensive stops against the run. His 15.3% run-stop percentage is second among linebackers and has also allowed only 29 yards after the catch on 84 snaps in coverage.

Quarterman and the Miami defense has been stingy all season long despite the disappointing loss to Virginia last week. Quarterman holds the conference's top pass-rushing grade among linebackers, leading the way also with 15 pressures (five sacks, five hits, five hurries) despite only 29 pass-rushes.

Joining our Midseason All-American Team, Cheevers has exploded onto the scene this year. Despite a touchdown allowed, he has made eight total plays on the ball (four interceptions, four pass breakups), limited receivers to just 58 yards after the catch and allowed just a 20.3 passer rating on 40 throws into his coverage.

Bandy is second in the conference in both coverage grade and overall grade at the cornerback position, recording three interceptions on just 14 targeted passes.

Blount put forth maybe the best game from a safety in the ACC this season against Miami, registering an interception and two pass breakups. It put the exclamation point on a stellar first half of the season in which he has now allowed just eight yards after the catch on 15 targeted passes, not given up a touchdown and made two interceptions and three pass breakups in coverage.

Outside of a 70-yard touchdown given up in coverage, Harris has allowed just eight other receptions for 101 yards (30 after the catch) and made an interception and pass breakup this season.

Rounding into form after missing time in the middle of the first half of the season, Johnson has been impressive in coverage (a long reception allowed of nine yards), but maybe even more so with his tackling skills as he's made 30 solo tackles while missing just one.