After grading and analyzing every player on every play of every game during the 2018 college football season, it’s time we unveil the 2019 Preseason Eckrich All-American first team, second team and honorable mention for every position on offense and defense as well as for the first time ever, specialists.

The Preseason Eckrich All-American list may differ a bit from any year-end look back at the previous season as we project to the 2019 season ahead of us. These lists can be found in their entirety by clicking on the following links. 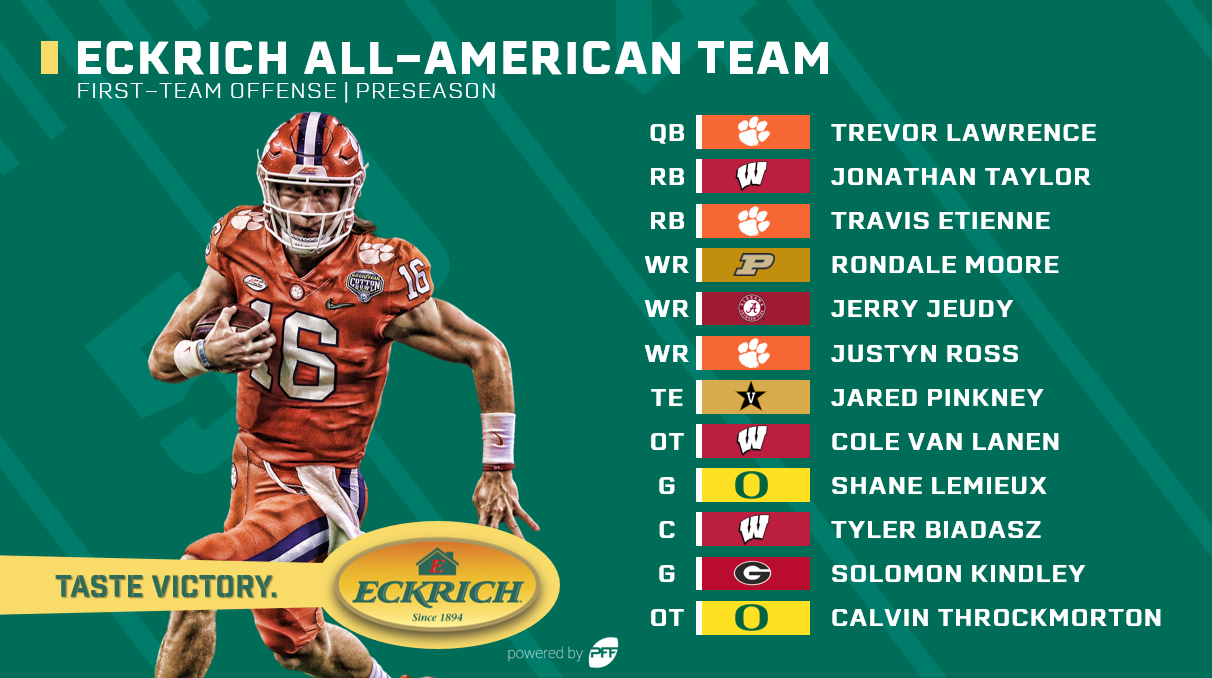 Lawrence peppers the field with top-notch throws as he beautifully navigates the Clemson offense on their National Title defense. He's the highest-graded true freshman quarterback we've ever seen at PFF.

No running back comes close to Taylor's production of back-to-back seasons with 1,300+ yards after contact and at least 66 missed tackles forced on the ground.

The highest-graded running back from the past two years, Etienne is a threat with the ball in his hands and averages over 8.0 yards per carry.

The shiftiest receiver in college football returns for a true sophomore campaign after leading the nation with 37 missed tackles forced after the catch last year.

Jeudy runs the nation's best routes as the reigning Biletnikoff Award winner is one of the more dominating receiving threats we've seen in a while.

Ross is arguably the best receiver in football, in a stacked receiver class we haven't seen the likes of in some time. Lawrence to Ross for the next two years, please.

Pinkney leads all returning tight ends in yards and is a diamond in the rough in terms of his elusiveness after the catch. He can make defenders miss just as easy as he can grab the contested catch over the middle of the field.

Leading the nation's tackles in run-blocking grade by some margin, the aforementioned Taylor has one of the better run-blocking tackles that we've seen in five years of grading out in front of him.

The highest-graded returning guard, Lemieux is strong in both pass protection as he is in run-blocking while the latter leads all guards. He allowed just 11 pressures on nearly 500 pass-blocking snaps in 2018.

The pinnacle of the center position in 2019, Biadasz has finished 16 games without a single pressure allowed and dominates at the next level in run blocking.

Kindley is a dominant force on the ground for the Bulldogs rushing attack just as he is strong in pass protection. A well-rounded guard anchors one of the nation's top tackle duos.

Throckmorton holds the nation's top pass-blocking grade since 2017 and has allowed just three sacks + hits on 862 pass-blocking reps in that two-year span. 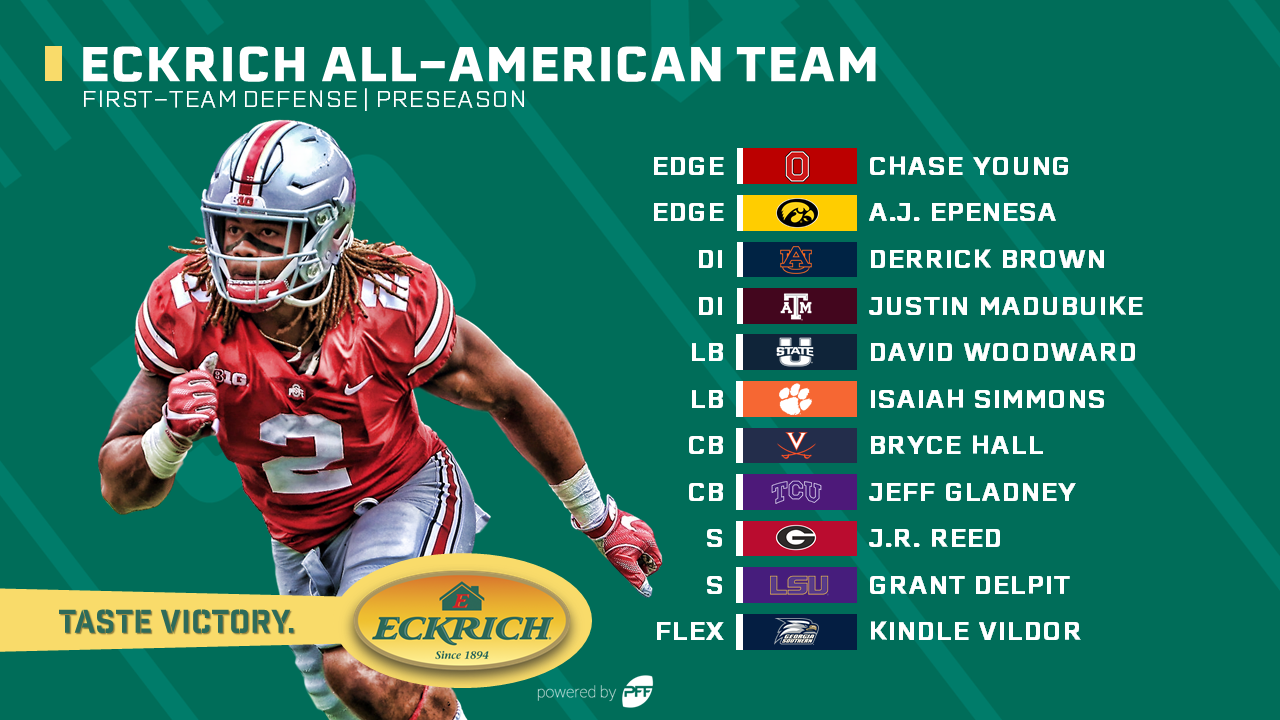 No edge defender had more pressures than Young did in 2018 and that number should only be on the rise as he continually wins his pass-rushes with ease and with a bevy of pass-rush moves.

Epenesa is primed for big things in 2019 in an extended role. On limited snaps, he leads the Power-5 in pass-rush win rate over the past two seasons.

A sure-tackler, Brown has missed just four of his 85 tackle attempts over the past two seasons and is fourth among defensive interior players in pressures.

Leading the nation's interior defenders last season, Madubuike racked up 19 combined sacks and hits while only missing one tackle in run defense as a true three-down interior defensive lineman.

Excelling at all facets in the game, Simmons is a dominant college linebacker in coverage. On 59 targets a season ago, he allowed just 1 touchdown and forced nine incompletions.

The highest-graded returning linebacker from a year ago, Woodward has sideline-to-sideline ability and can hold his own in run defense, pass-rush and in coverage.

The top defensive player returning to college football, Hall excels when covering the intermediate to deep levels of the field. On 44 targeted passes of at least 10 yards downfield, Hall forced 18 incompletions compared to just 14 receptions allowed.

As stout a Big 12 cornerback as anyone will find this season, Gladney was targeted a whopping 71 times a year ago. He allowed just 27 of those to be caught in a breakout year last season.

Reed has the fifth-highest coverage grade among active safeties and has allowed just 6.1 yards per target as the primary coverage defender.

Save for his missed tackles, Delpit flies to the ball like a missile and can bring it on the pass-rush, in run defense and is terrific in coverage.

Second to only Bryce Hall in two-year grades, Vildor has shown he is more than capable of playing on the big stage. Against Clemson, he was targeted seven times, allowed two receptions for 10 yards and had an interception and two pass breakups.

Szmyt was a perfect 61-for-61 on extra points a year ago and went 3-for-3 from 50+ yards. No kicker made more field goals from 30 or more yards out than Szmyt did a year ago.

The nation's highest-graded punter by some margin, Mann averaged 51.0 yards per attempt and 44.8 net yards per punt, both tops among returning punters.

Smith-Marsette racked up 701 yards on just 24 returns while averaging the nation's top yards per attempt among qualified active returners.

Williams had 313 punt-return yards a season ago and went the full season without a muff on an attempt. His 10.8 yards per punt return are second-most among punt returners with at least 20 returns.