We’re looking ahead to the best matchups in Week 3 where there are some sneaky good prospects — many of whom are not yet household names — facing off against each other. While there’s still not a ton of marquee matchups this early on in the season, we’ll be dialed in all day Saturday nonetheless.

This is low-key the prospect matchup of the weekend to watch. Bradley-King is an undersized yet twitchy edge defender with a number of effective moves that are going to stress Thomas athletically. He’s got two sacks, three hits and one hurry for an 85.5 pass-rushing grade through two games after earning a 91.3 pass-rushing grade on 189 pass-rushes last year. Thomas, on the other hand, is currently the highest-graded tackle in the nation. Bradley-King splits his time between left/right so they’ll face off a good number of times.

Robinson’s résumé at this point speaks for itself. He racked up 56 pressures a season ago and already has 10 through two weeks of this season. Anchrum, on the other hand, is still trying to prove himself as a prospect in his third year as a starter for the Tigers. At 6-2, his best position is likely on the interior, but holding his own against a 260-pound edge will still do wonders for his draft stock. Through two games, he’s got a 90.2 overall grade after earning a 68.6 last season. The good news is that we’ll be seeing this one all day long as Robinson exclusive lines up on the left side of the defensive line. 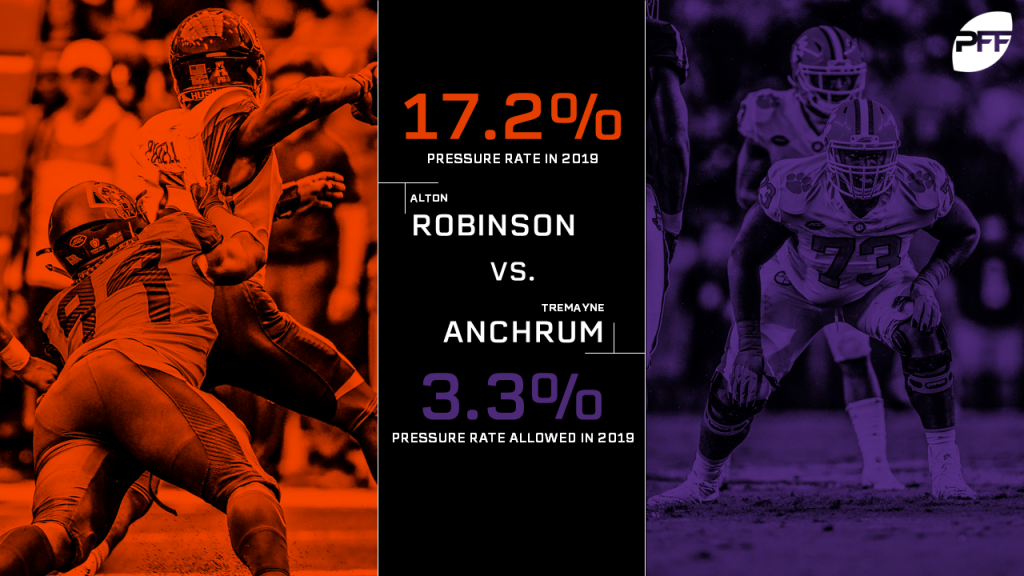 We don’t know for sure if Holmes is going to be playing Saturday after missing UCLA’s first two games with an ankle injury, but he fully participated in warmups earlier this week. He’ll be thrown to the fire if he is a go, as Lamb was the third-ranked receiver on PFF’s preseason draft board. The Oklahoma offense hasn’t missed a beat after losing first-rounders Kyler Murray and Marquise Brown. Lamb has been a huge part of that, averaging 4.75 yards per route run through two games.

You might have to wait until the All-22 to fully evaluate this one, as Davis plays mostly deep safety in Cal’s defense and often isn’t even on the TV screen. However, that All-22 last year showed a rangy playmaker and it’s why he cracked the top-50 on PFF’s preseason draft board. His track speed will be tested against one of the best deep ball combos in college football. Bussey had 11 deep receptions in 2018 while Fine was fifth in the nation in big-time throws.

While Moore is only a true sophomore and won’t be eligible until 2021, it’s never too early to start an eval. Plus, he’s arguably the most fun player to watch in the country. His 197 yards after the catch are the second-most in the country. In Gladney’s lone matchup against Arkansas Pine-Bluff this season he allowed 1-3 targets for 11 yards. They won’t match up a ton as Moore takes around 75% of his snaps from the slot and Gladney is an outside corner, but we’ll still be tuned in closely to the tackle opportunities and routes where they are going head-to-head.