This list of statistics was brought to you by Eckrich, the Official Smoked Sausage of the College Football Playoff.

Our Quarterback of the Week, Grier peppered the field with six big-time throws, some of which his receivers were unable to haul in. He finished with a strong adjusted completion percentage of 79.4 percent.

Led the nation's quarterbacks who threw at least 30 passes with an adjusted completion percentage of 89.6 as he completed 40-of-50 passes while having three passes dropped, one batted at the line of scrimmage and one throwaway. 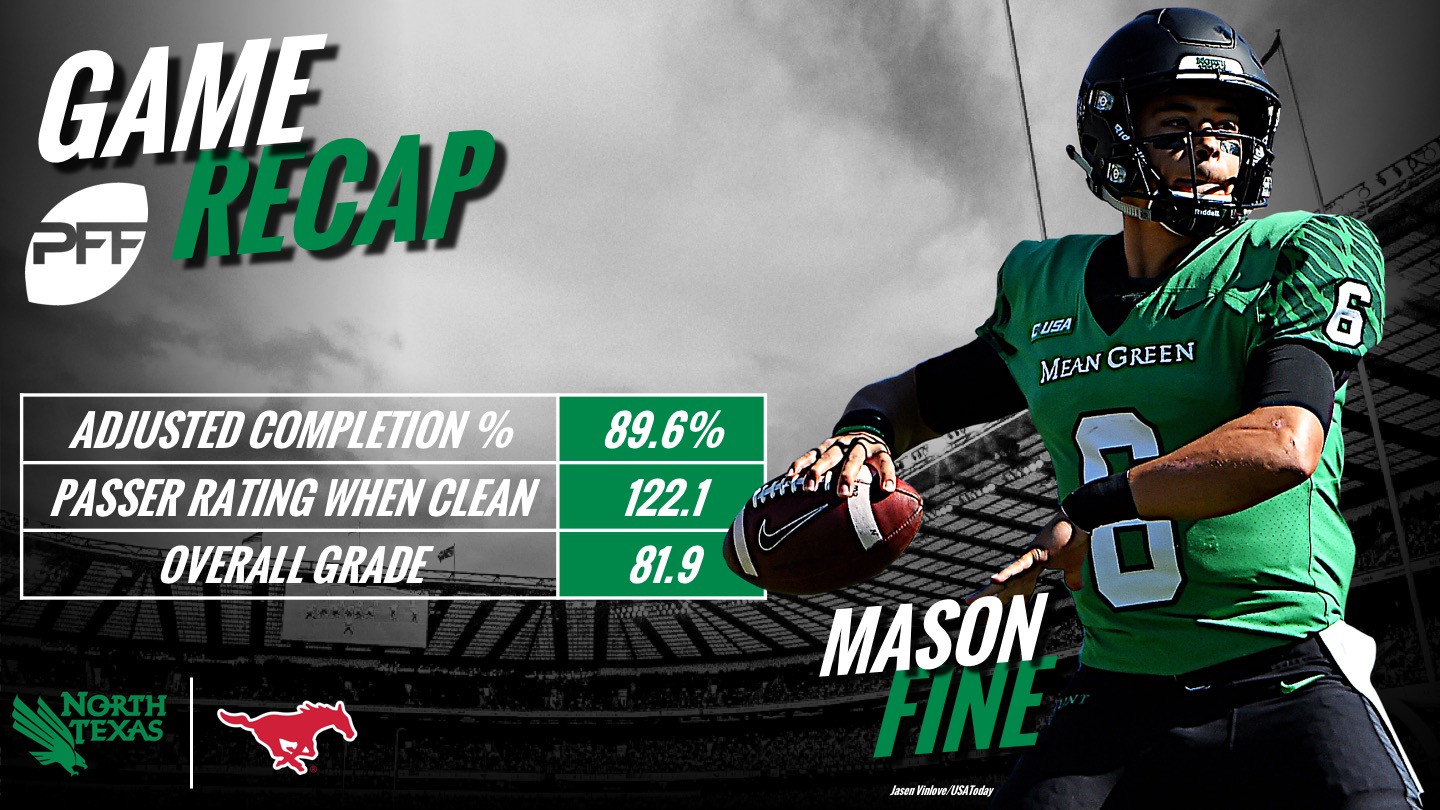 Led the nation with 12 deep passing attempts, completing seven of them for a nation-high 246 yards and three scores.

Completed three out of eight deep (20-plus yard) passes, but had four of his five incompletions dropped. His 87.5 adjusted completion percentage on deep passes tied for third in the nation this week.

Calvert lit up the stat sheet in Liberty's first game as an FBS school, tossing for the nation's highest adjusted completion percentage when kept clean from pressure (96.2 percent), connecting on 23-of-27 attempts from a clean pocket with two dropped passes. 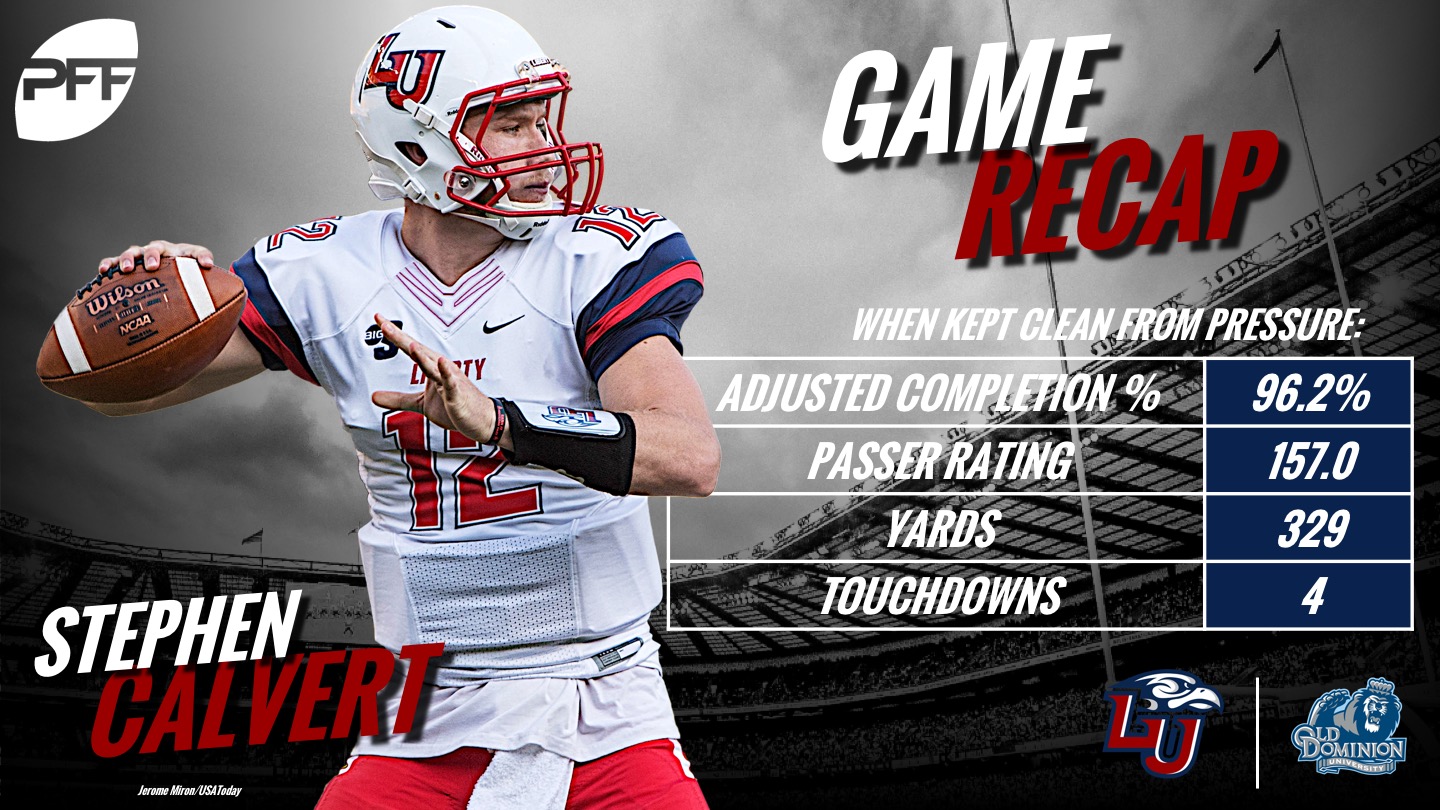 Jordan forced 12 missed tackles on only 20 rushes, good for a nation-high elusive rating of 223.6.

Shenault hauled in 11-of-12 targets, recording a ridiculous 213 yards after the catch, totaling 211 yards through the air on 24 snaps in route.

53 receivers saw at least 10 targets in Week 1 and of those receivers – Ursua led them all with a perfect passer rating (158.3) when targeted, hauling in 10 of his 12 targeted passes for 167 yards and 2 touchdowns. 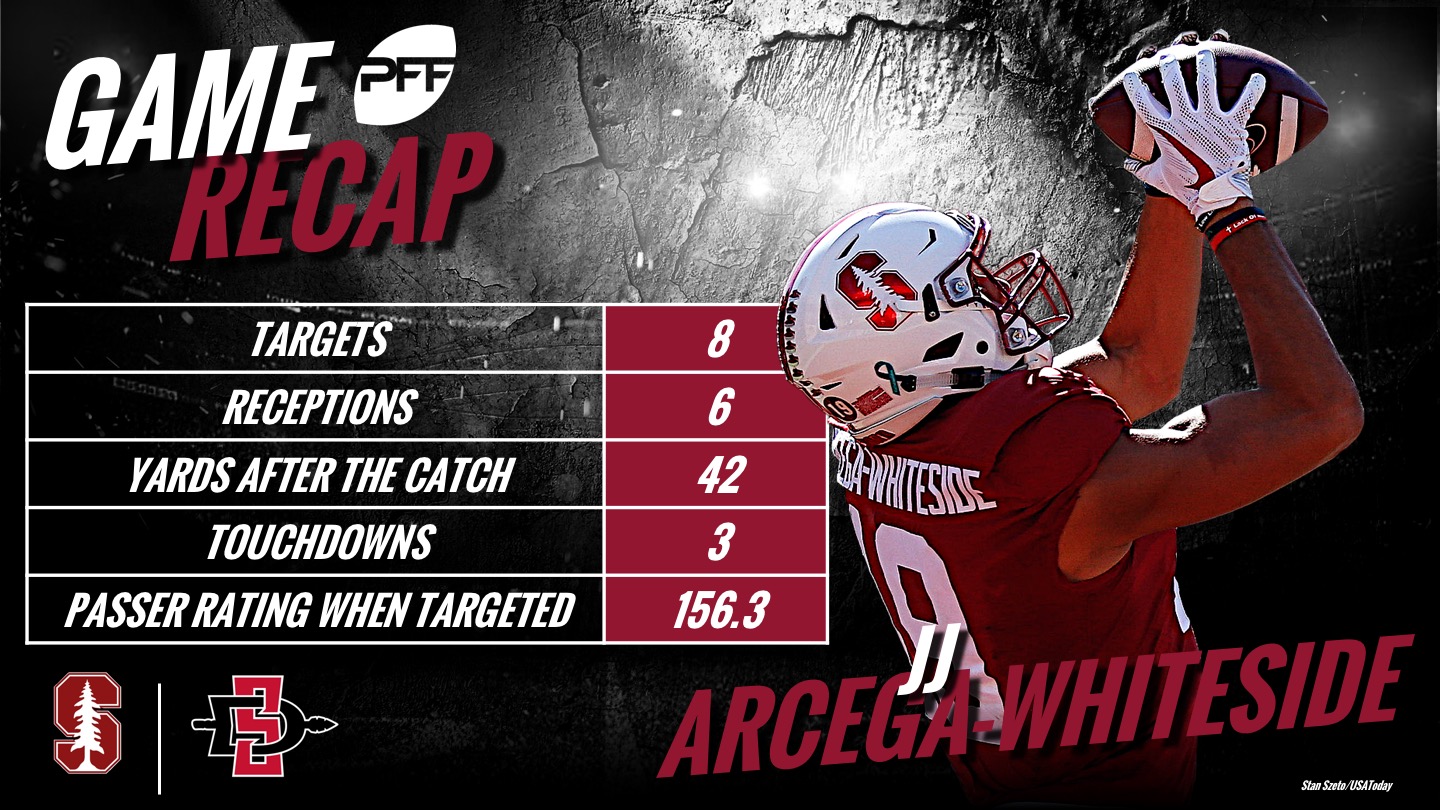 The two transfers immediately impacted their new team, combining for 11 targets, three touchdowns, 12.6 yards per reception and a whopping 132.9 passer rating when targeted.

Our No. 10 player in the nation heading into the season, Risner did not allow a pressure in pass protection on 37 attempts.

PIcked up a run stop on six of his 20 snaps against the run, good for a run-stop percentage of 30.0, best in the nation this week.

The nation's best run defender was at it again with six run stops, tied for the national lead among interior defensive linemen. 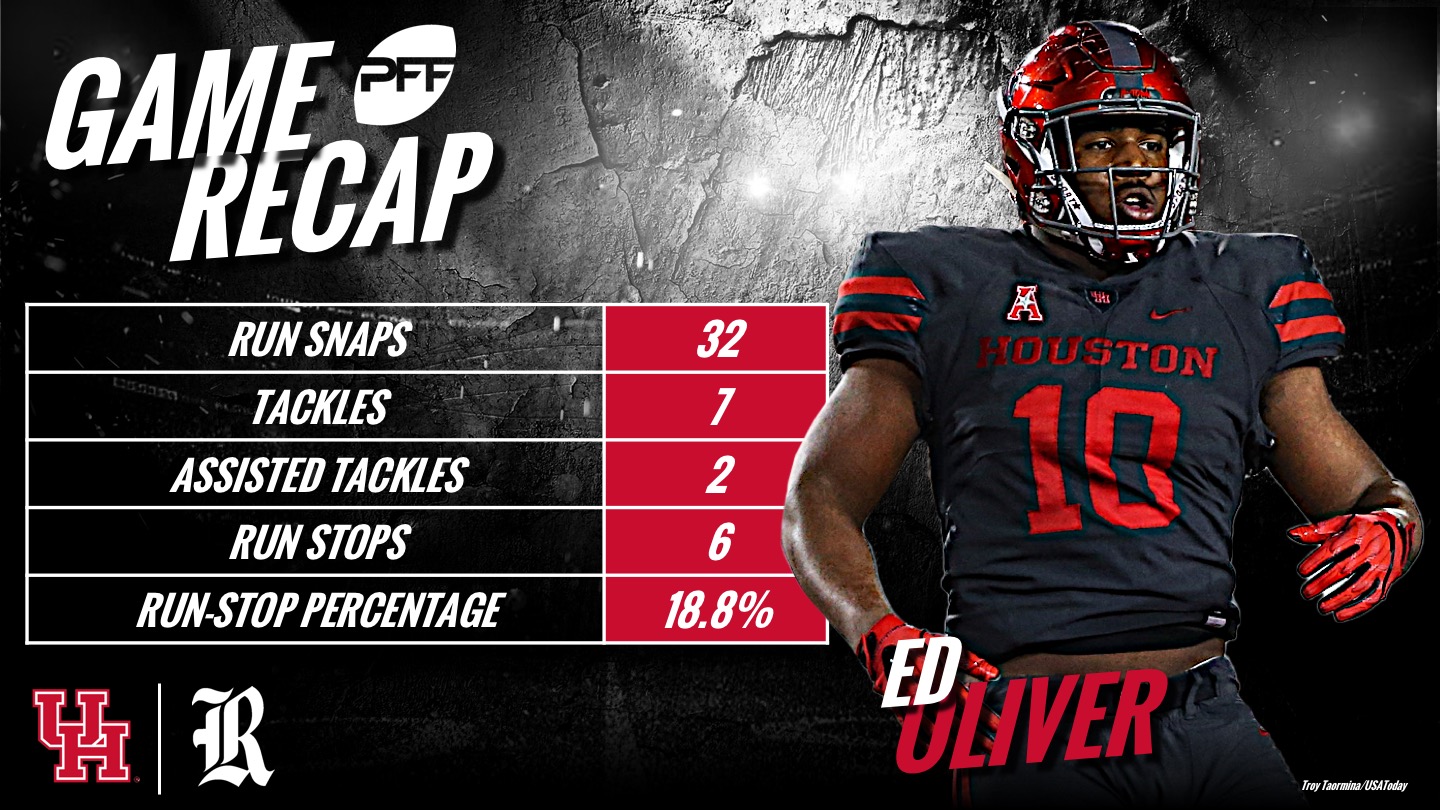 Jones posted the top pass-rushing grade among interior defensive linemen with three sacks and a QB hit on only 20 pass-rushing snaps.

Rounding out one of the best defensive lines in the nation, Young notched nine total pressures (three QB hits, six hurries) on only 18 attempts rushing the passer. 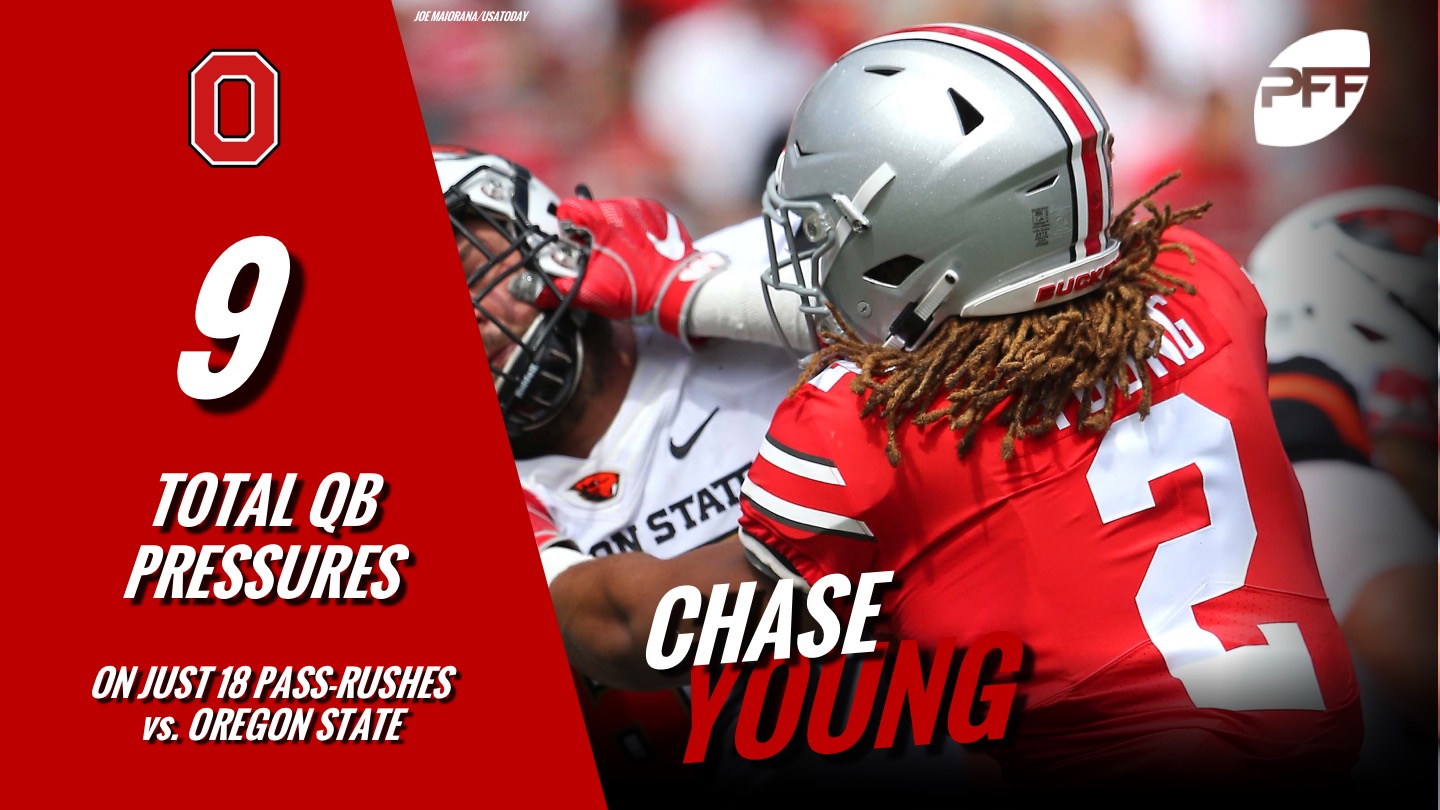 Picked up a sack, three QB hits and four hurries on only 20 pass-rushing snaps against Notre Dame.

Thompson lit up the stat sheet with an interception, sack and three pass breakups on his 57 snaps, good for a spot on our Team of the Week.