The 2019 NFL Scouting Combine is just hours away from beginning. Athletes and media, as well as coaches and scouts, ascend on Indianapolis for measurements, on-field drills, tests, meetings, interviews and so much more. While we will be in attendance at the combine this year, we took the liberty of placing our top 50 athletes for this April's 2019 NFL Draft in our first offseason draft board, ahead of the combine.

While we're sure some of the drills may affect our rankings on the final draft board before the draft itself, here are the top 50 athletes for the 2019 NFL Draft. 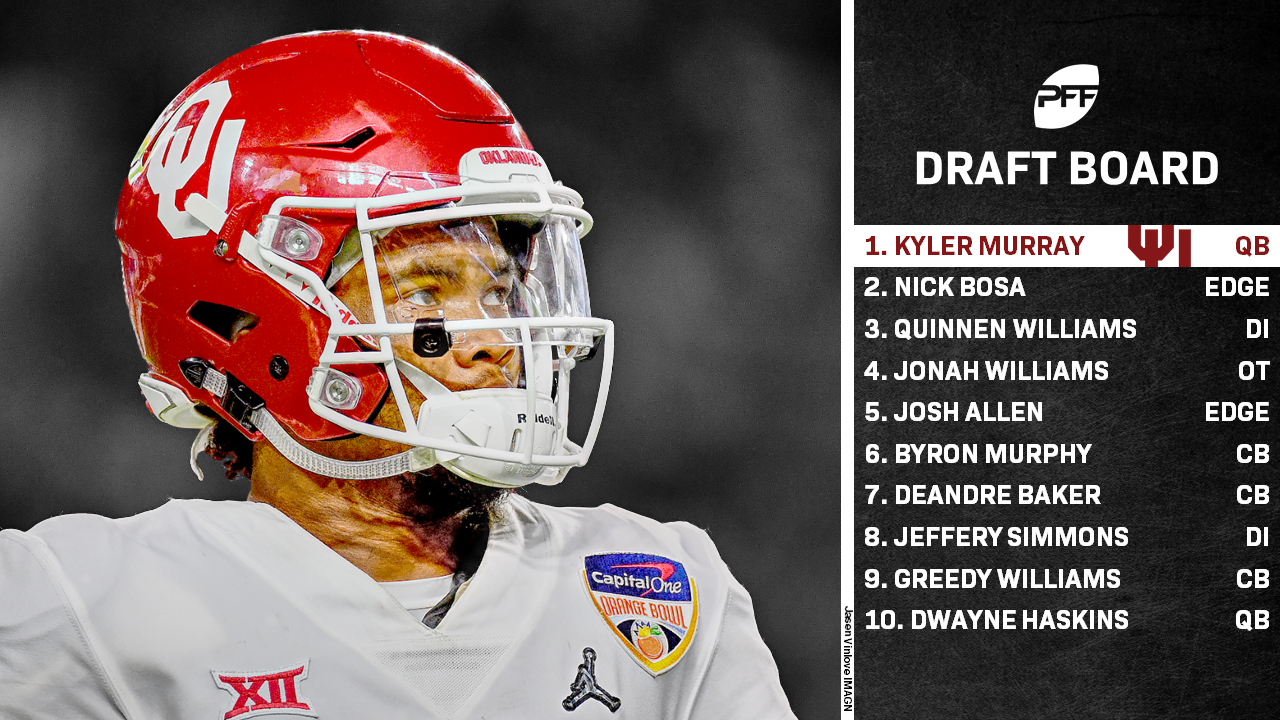 The highest-graded quarterback in college football this past season. We haven't seen a quarterback that is as dangerous with both his arm and legs since Russell Wilson.

Bosa had a higher pass-rushing win rate as a true freshman than Brian Burns, Clelin Ferrell and Jachai Polite had this past season.

Williams earned the highest grade we've ever given to a college interior defensive lineman (96.0) in his lone season as a starter at Alabama.

The Alabama left tackle was the second-highest graded tackle in the nation despite facing stout SEC competition and allowed only 12 pressures.

Baker has posted back-to-back 90.0+ graded seasons in coverage. This past year, he allowed all of 10 first downs and no touchdowns all season long.

He tore his ACL but did it so early in the process that he could still play as a rookie. Simmons had a run-defense and pass-rushing grade over 90.0 this past season.

His third season wasn't quite as dominant as he was a season prior, but he still only allowed 27 of his 74 targets to be completed. 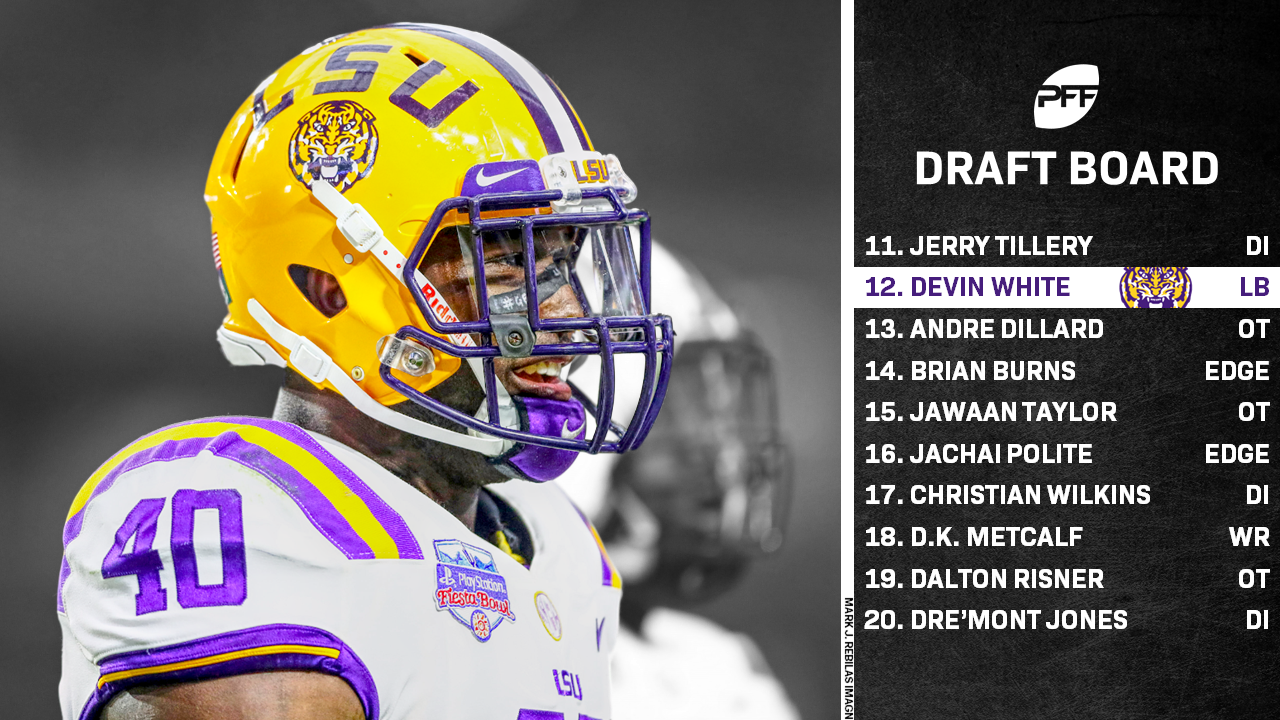 Tillery tied Williams for the highest pass-rushing grade among interior d-linemen in college football. Tillery's sack totals don't tell the whole story as he was a dominant week in and week out.

Dillard had the highest pass-protection grade of any starting tackle in the country at 94.0 this past season.

Polite came out of nowhere to notch the second-best pass-rushing grade among Power-5 edge rushers.

Risner started all four seasons at Kansas State and his career-low grade was 87.9 overall.

No player in the FBS rushed the passer more than Dre'Mont Jones' 500 snaps this past year. The man simply didn't come off the field and still produced with a 90.5 pass-rushing grade. 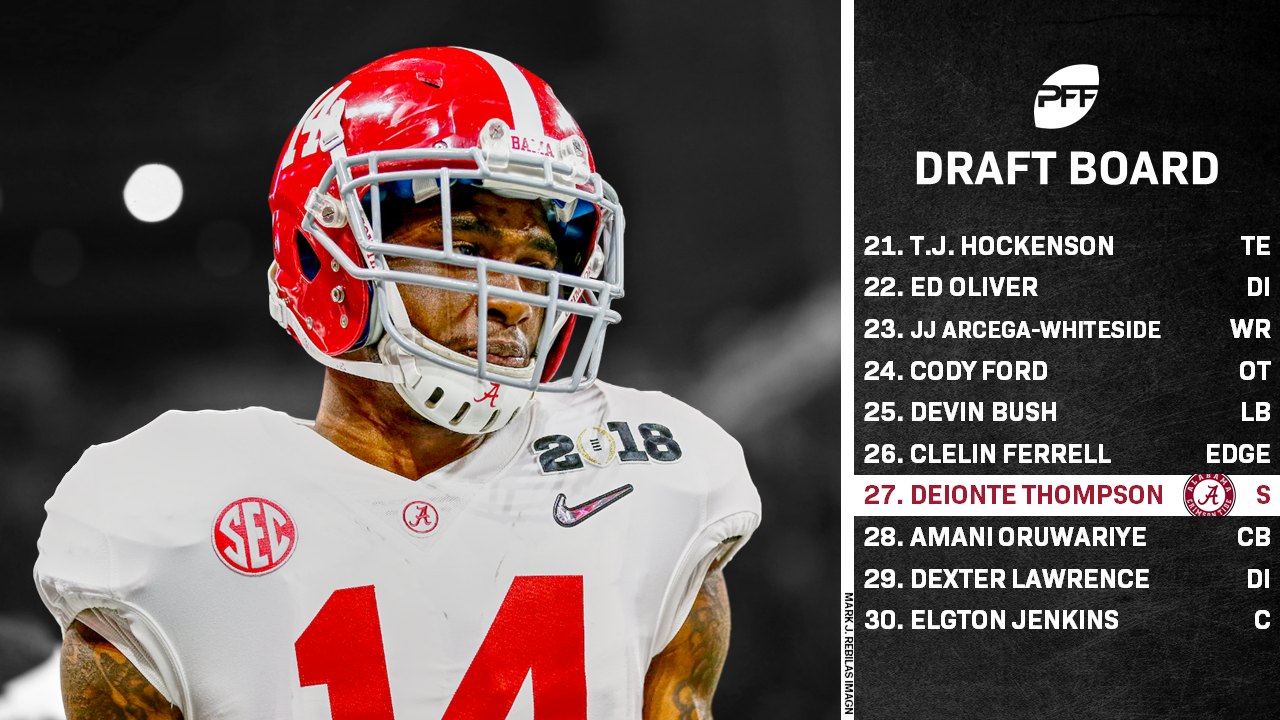 His pass-rushing finally came around with a 90.8 grade this past season, but considering his size and the competition he was facing, he still has a ways to go.

Ferrell racked up 14 sacks and 14 hits on the season and has an ideal build to fit in any scheme.

He got exposed more down the stretch this season but Thompson made plays from centerfield that few NFL safeties are even capable of.

Oruwariye had the best week of any corner at the Senior Bowl, notching the highest win rate among all defenders in the 1-on-1s.

340-plus pound nose tackles are going the way of the Dodo in the NFL, but Lawrence is a pretty ridiculous athlete for his size. He had the 12th-best pass-rushing grade among interior players in all college football. 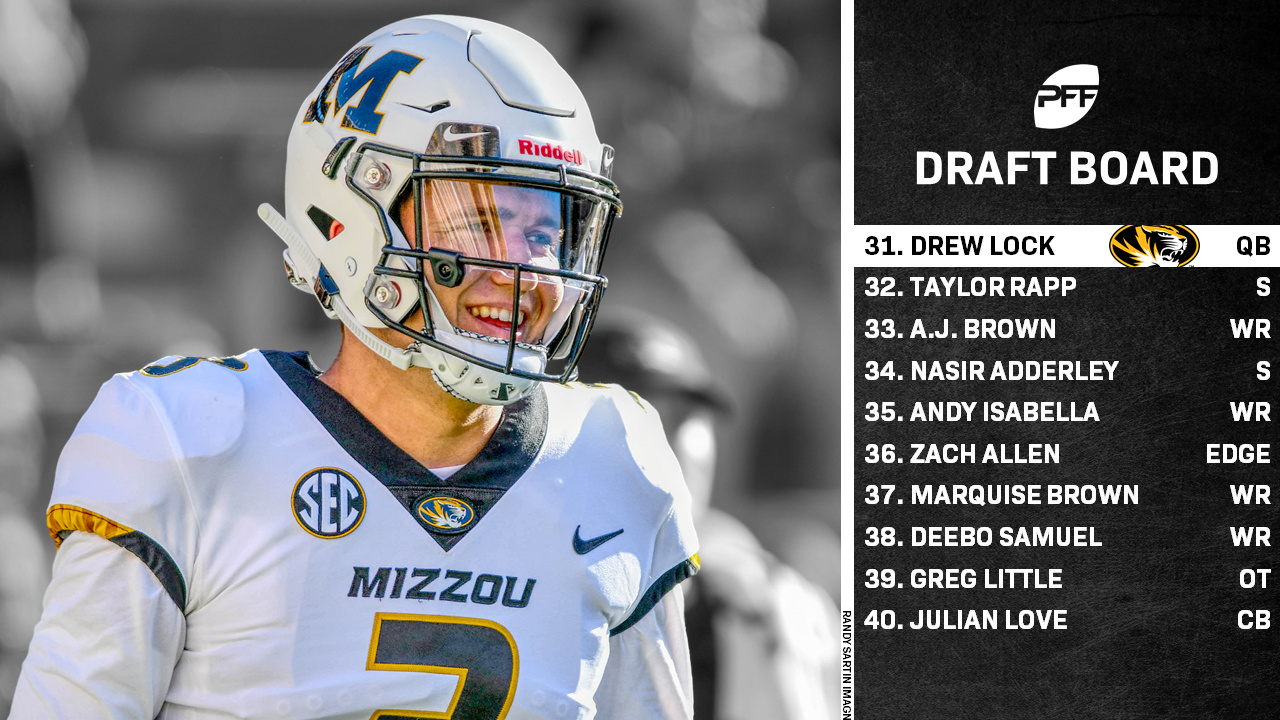 Lock paired an NCAA-leading 33 big-time throws with only six turnover-worthy plays as a senior.

Rapp was one of the most assignment-sure safeties in the country this past season and missed just two tackles on 56 attempts.

Brown was the definition of a complete receiver for Ole Miss. He forced 17 broken tackles, had 34 explosive plays and only dropped five passes on 90 catchable targets.

We don't have full data on Adderley yet, but his range and speed were evident at the Senior Bowl practices.

Isabella was the highest-graded receiver in the country, racking up 1,696 yards including 219 against Georgia.

Samuel broke an absurd 21 tackles on only 62 catches this past season and had a fantastic week at the Senior Bowl.

Over the past two seasons, Little allowed 26 total pressures on 993 pass-blocking snaps.

Love's 21 forced incompletions were the sixth most in college football last season and his 14 coverage stops ranked 10th. 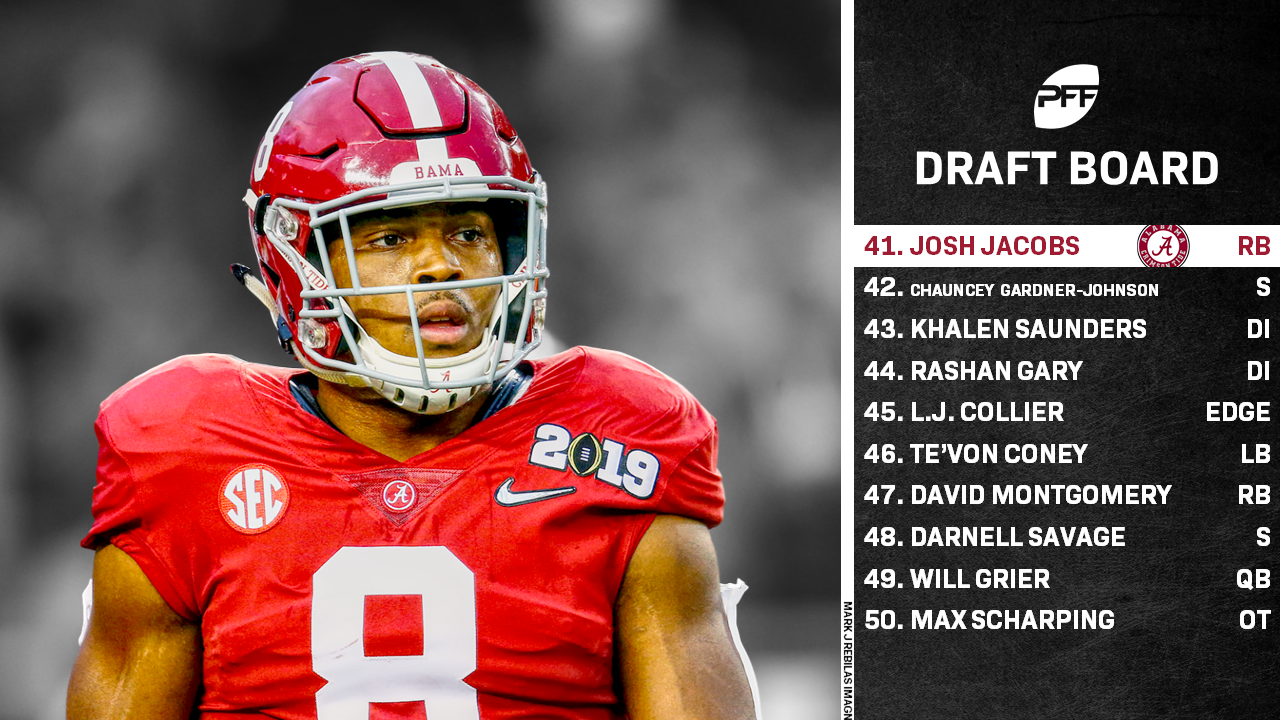 On the season, 41.0% of Jacobs' carries resulted in either a first down or a touchdown, the highest rate in the country.

Saunders moves like an edge and even played there at times for Western Illinois. He went to the Senior Bowl and had the second-highest win rate among interior players in the 1-on-1s.

Collier improved every year at TCU and then went to the Senior Bowl and had the highest win rate of any player in the 1-on-1s.

Coney had the fourth-highest coverage grade among eligible linebackers while also adding value as a pass-rusher with 20 pressures on just 76 pass-rushing snaps last year.

Montgomery broke the PFF record with 100 broken tackles on 258 carries this past season.

Grier tied Drew Lock for the NCAA lead with 33 big-time throws and had the second-best passing grade behind  Murray.