A year ago, Stanford's Christian McCaffrey and San Diego State's Donnel Pumphrey were well on their way to impressive seasons after the Week 7 mark, that saw them each drafted in the 2017 NFL draft. This year, the same schools find themselves once again at the epicenter of the limelight in terms of draft-eligible running backs, but with a whole new cast and crew.

One pegged as a breakout star by our very own Steve Palazzolo and the other a star in waiting, Stanford's Bryce Love and San Diego State's Rashaad Penny lead an elusive group of draft-eligible running backs so far this season in total missed tackles forced. 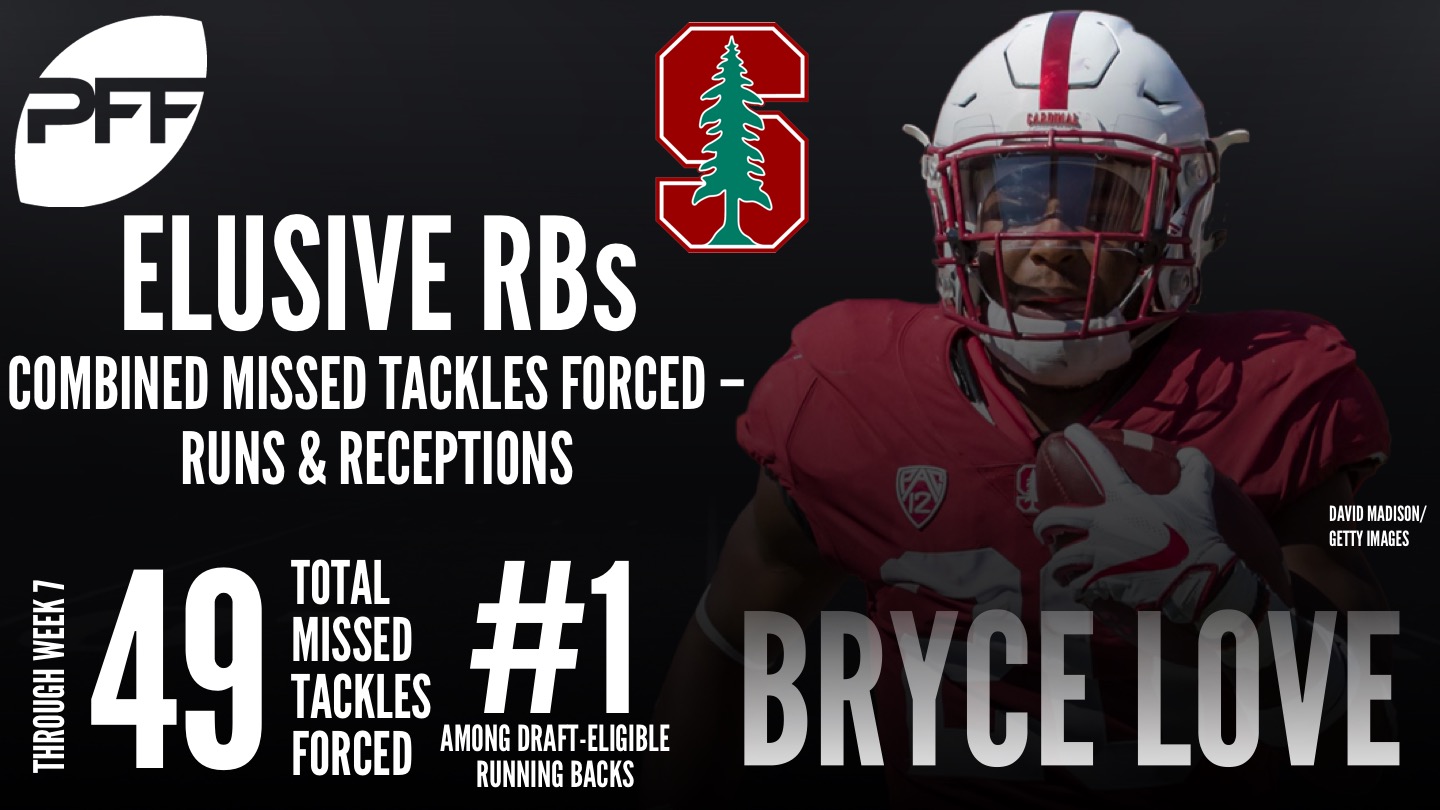 Love burst on to the scene this season in Week 1 in Australia, carrying the ball just 13 times for 180 yards and a touchdown with six missed tackles forced against Rice. He's followed that up with multi-MT forced games including a whopping 12 forced against Arizona State on his way to 301 yards and three scores. Love has the ability to make defenders miss and break big runs, as he has 24 breakaway runs so far this season (15-plus yard runs), which leads the nation. Maybe the most special factor in Love's game so far this season, is his ability to sustain these ‘chunk plays' into huge gains for the Cardinal offense. On his 24 breakaway runs, he has gained 1,018 yards, meaning he averages 42.4 yards per. His 1,018 yards on breakaway runs is already the fourth-most recorded in the PFF era and that's just through seven games as he trails only Melvin Gordon (1,325, in 2014), Tevin Coleman (1,156, in 2014) and Dalvin Cook (1,066, in 2015), who each amassed their totals over a full season. 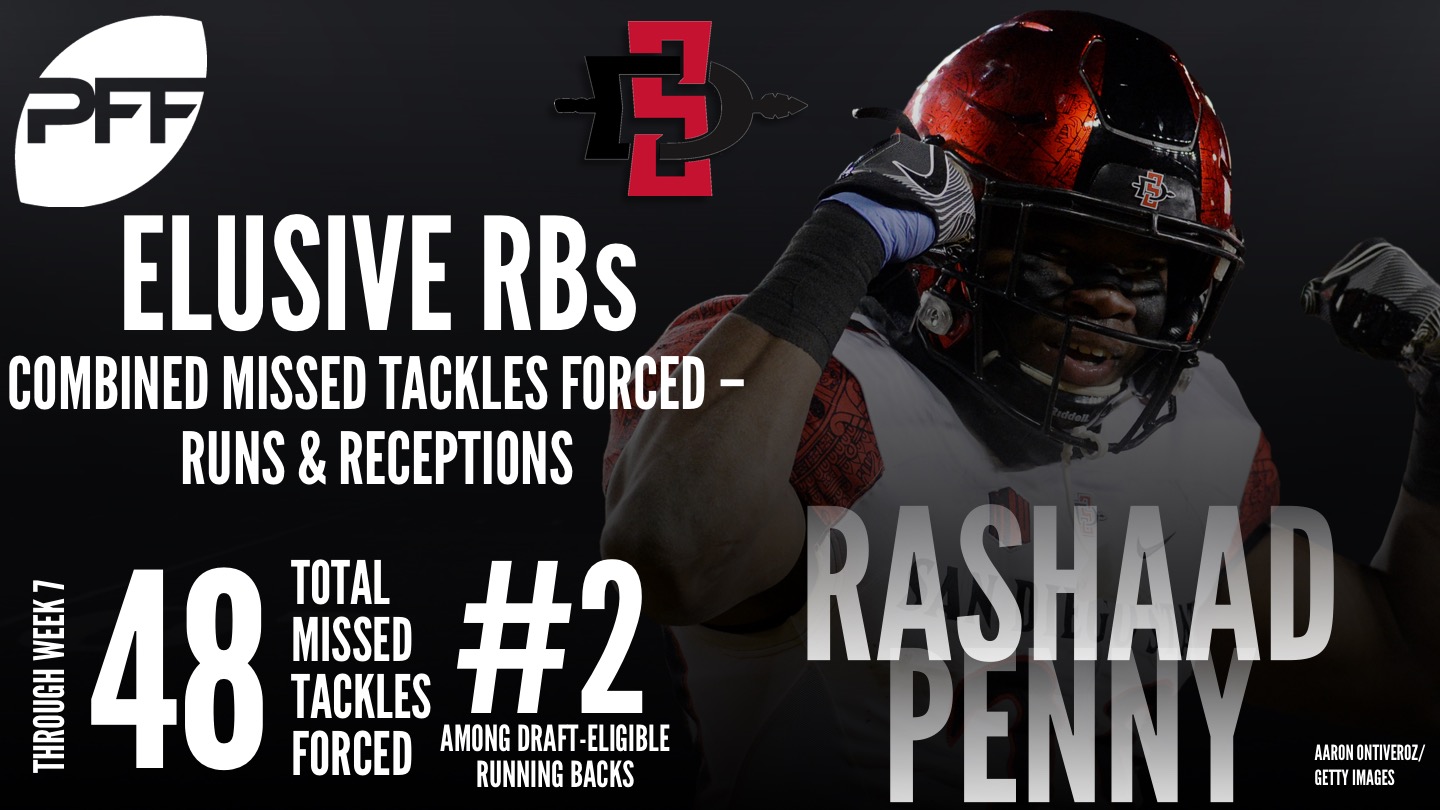 In 2016, Penny had to sit behind the NCAA career rushing yards leader in Pumphrey, to which he responded with 992 yards on 134 carries and 31 missed tackles a season ago. This year he has shown just how good he can be with the full workload. Penny has forced 48 total missed tackles including 46 on his 166 carries this season. He has eclipsed the 1,000-yard mark already in just seven games and has totaled over 100 yards after contact in three games this season. Forcing all those missed tackles have paved the way for him to break off 19 breakaway runs for 583 total yards – both of which are second to Love. 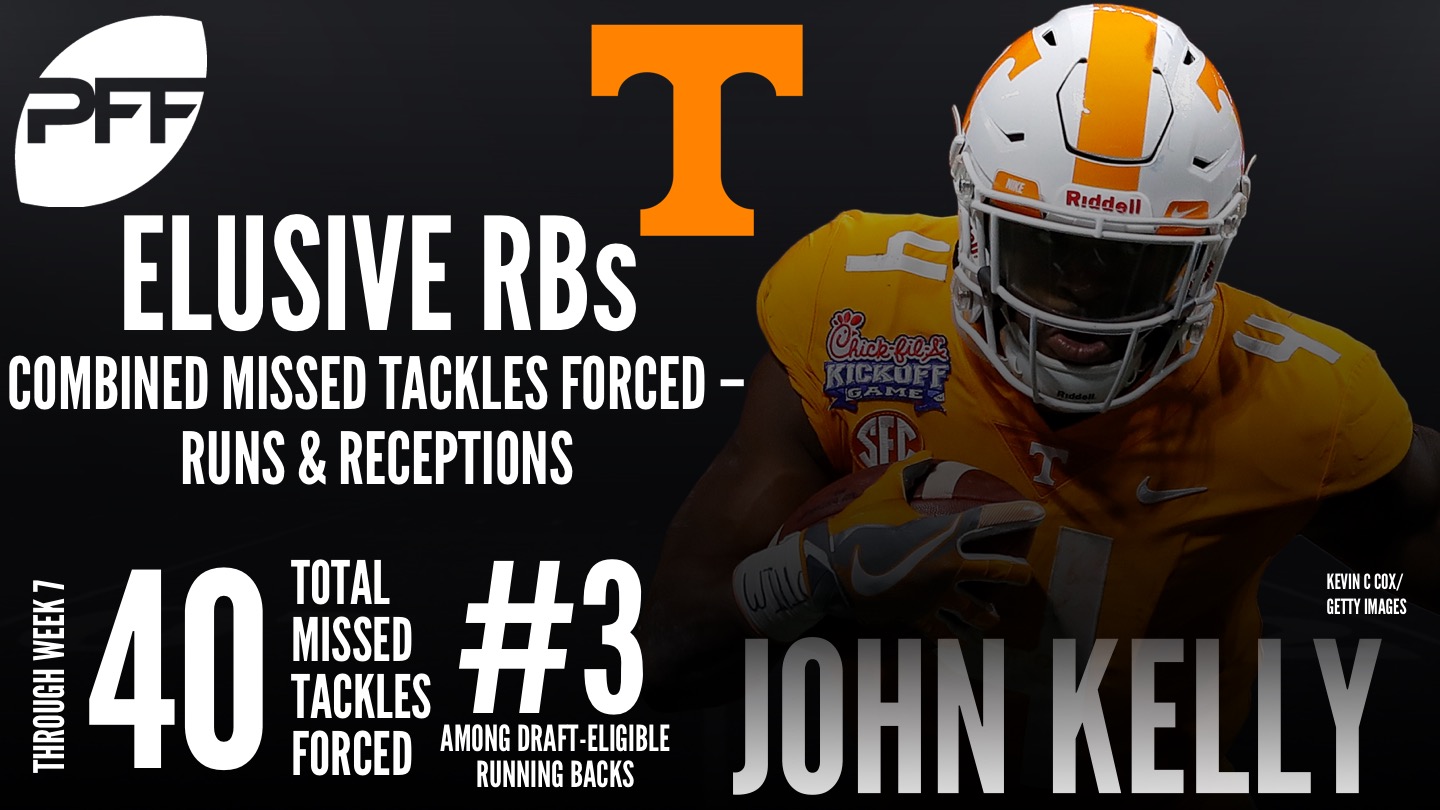 Kelly burst onto the scene in 2017 with three strong efforts including an 11-MT forced game against Florida in Week 3. While relatively quiet since, his efforts on the ground and through the air have placed him third on this list. His 31 missed tackles forced on the ground tie him for sixth among all running backs while his nine missed tackles forced on receptions are good enough for fourth. To improve his draft stock, Kelly should look to improve his 3.2 yards after contact per attempt over the past three games. Either way, his strong showing in 2017 already has shown his potential with eyes towards the NFL draft. 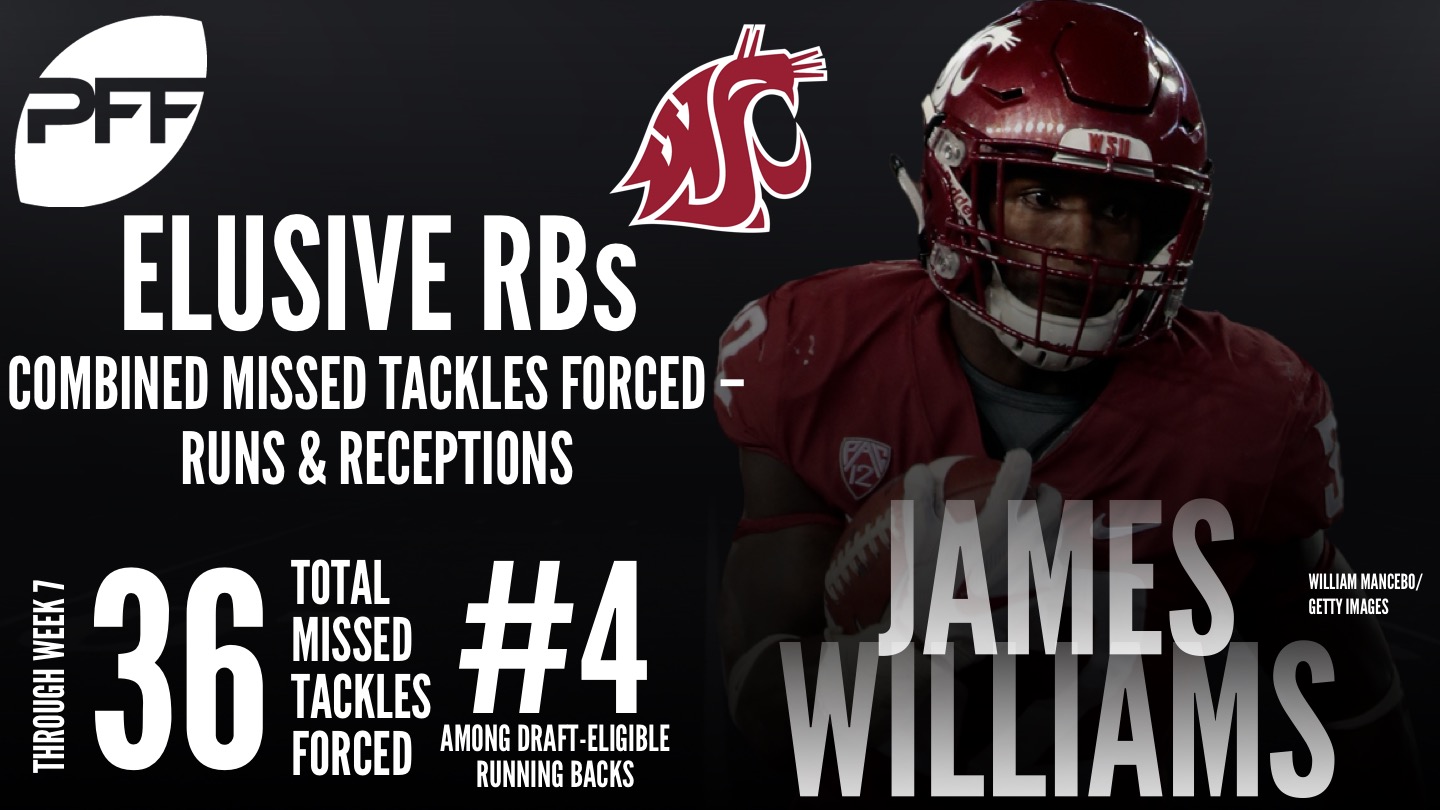 Arguably the best receiving threat out of the backfield in 2017, Williams holds a sizable lead in missed tackles forced on receptions at 21. Only three running backs have forced double-digit missed tackles on receptions, and Williams' 21 are seven more than the next closest. He's no slouch when the ball is in his hands in the backfield either as anytime he's received more than five carries in a game this season, he's forced at least two missed tackles in all but one game. One factor of worry however, is over the past three games in Pac-12 play, Williams has not forced a missed tackle on a reception in games against USC, Oregon and Cal on eight total catches, showing consistency issues. Either way, 21 missed tackles forced on receptions is no fluke and is already the tied for third-most in the PFF era, behind Taquan Mizell (22, in 2015) and I'Tavius Mathers (24, in 2016). 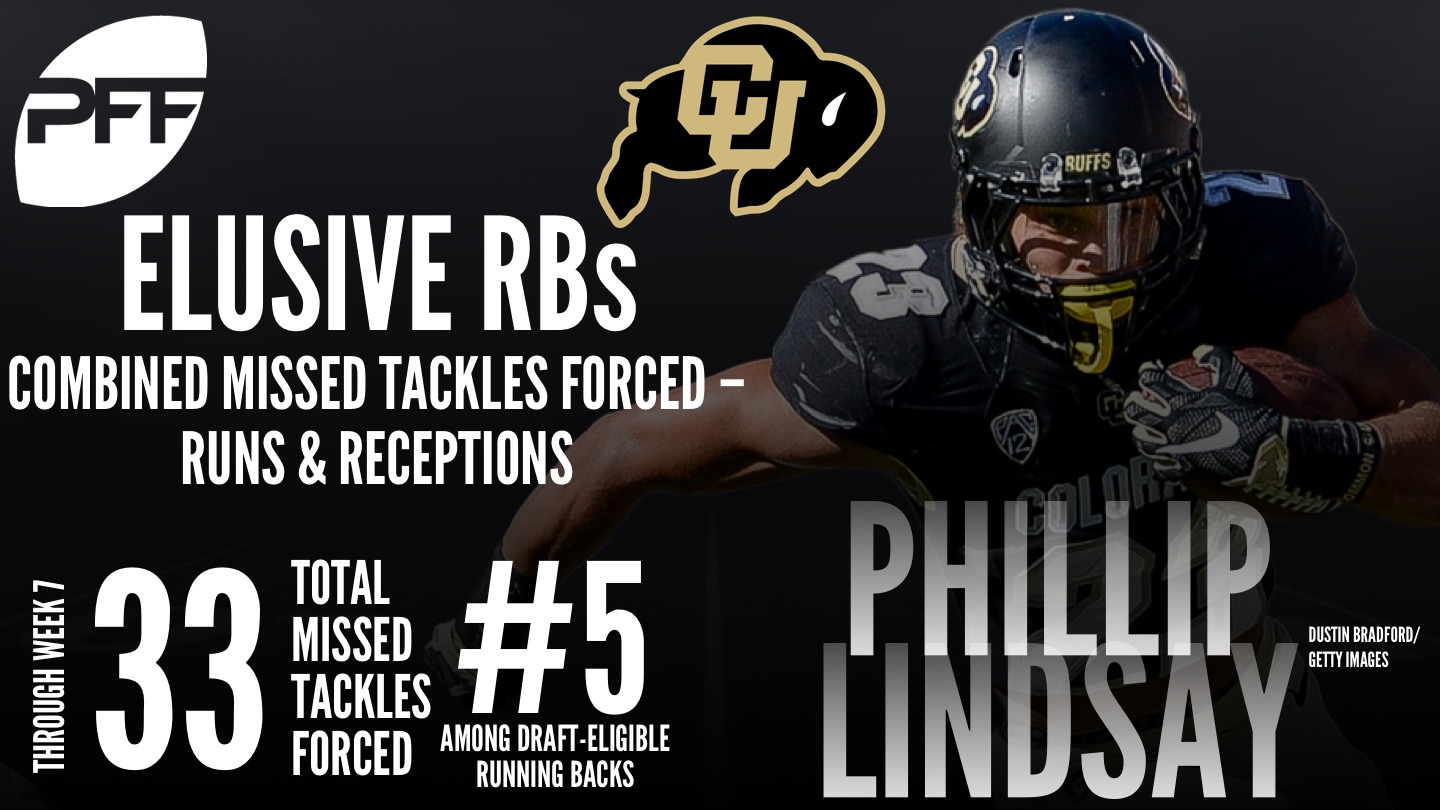 Lindsay has scored in every game for Colorado this season and has forced four or more missed tackles on the ground in four of seven contests so far. He's turned it on as of late, when it counts in Pac-12 play as well, forcing eight missed tackles against Arizona in Week 6, another three missed tackles in Week 7 against Oregon State, and notched multiple touchdowns in both games. He's well on his way to another 1,000-yard rushing season as he needs 11 yards to do so. In addition to missed tackles, yards and touchdowns, Lindsay's ball security has also improved this season, as on his 178 carries this year, he has yet to fumble after four career fumbles on the ground in his first three seasons in Boulder.