With eyes towards the 2018 NFL Draft, here are the players to keep your eyes on in the College Football Playoff semifinal during the Sugar Bowl. 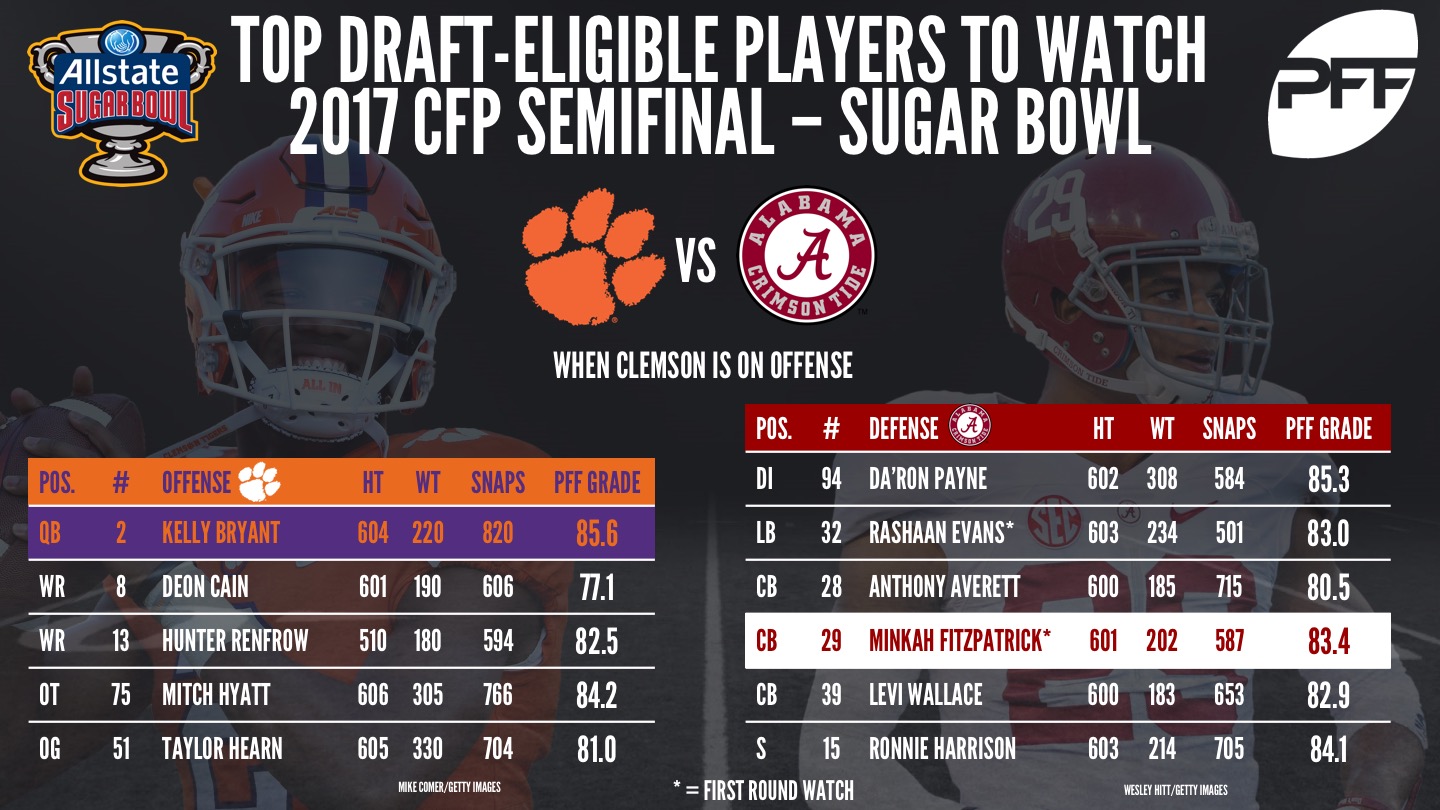 When Clemson is on offense:

Possibly the most important factor in this one, is if Bryant can receive solid protection from his offensive line. Guard Taylor Hearn has only allowed one sack, one QB hit and five hurries on his 332 pass-blocking snaps while tackle Mitch Hyatt has also only allowed one sack on the year as well as just two QB hits and 11 hurries on his 361 pass-blocking snaps.

Alabama is always stout on the defensive front-seven and this year is no different. Defensive tackle Da’Ron Payne has 21 run stops on the season in addition to two sacks, six QB hits and 15 hurries one 319 pass-rushing snaps. Inside linebacker Rashaan Evans has 19 run stops in addition to two sacks, nine QB hits and nine hurries on his 85 pass-rushing snaps. – @PFF_Jordan

As much as Alabama supplies the NFL with front-seven talent, their secondary has never been an area lacking in talent. They boast this year's Thorpe Award winner and and a cast of others who should surely hear their names called in April. Minkah Fitzpatrick is the most noteworthy, and versatile, as he 19 different alignments across the defense this season.

Fitzpatrick surrendered just a 79.7 passer rating into his coverage in conference play, brought down 11 QB pressures on just 51 pass-rushing snaps and tallied 23 defensive stops for the second consecutive season. 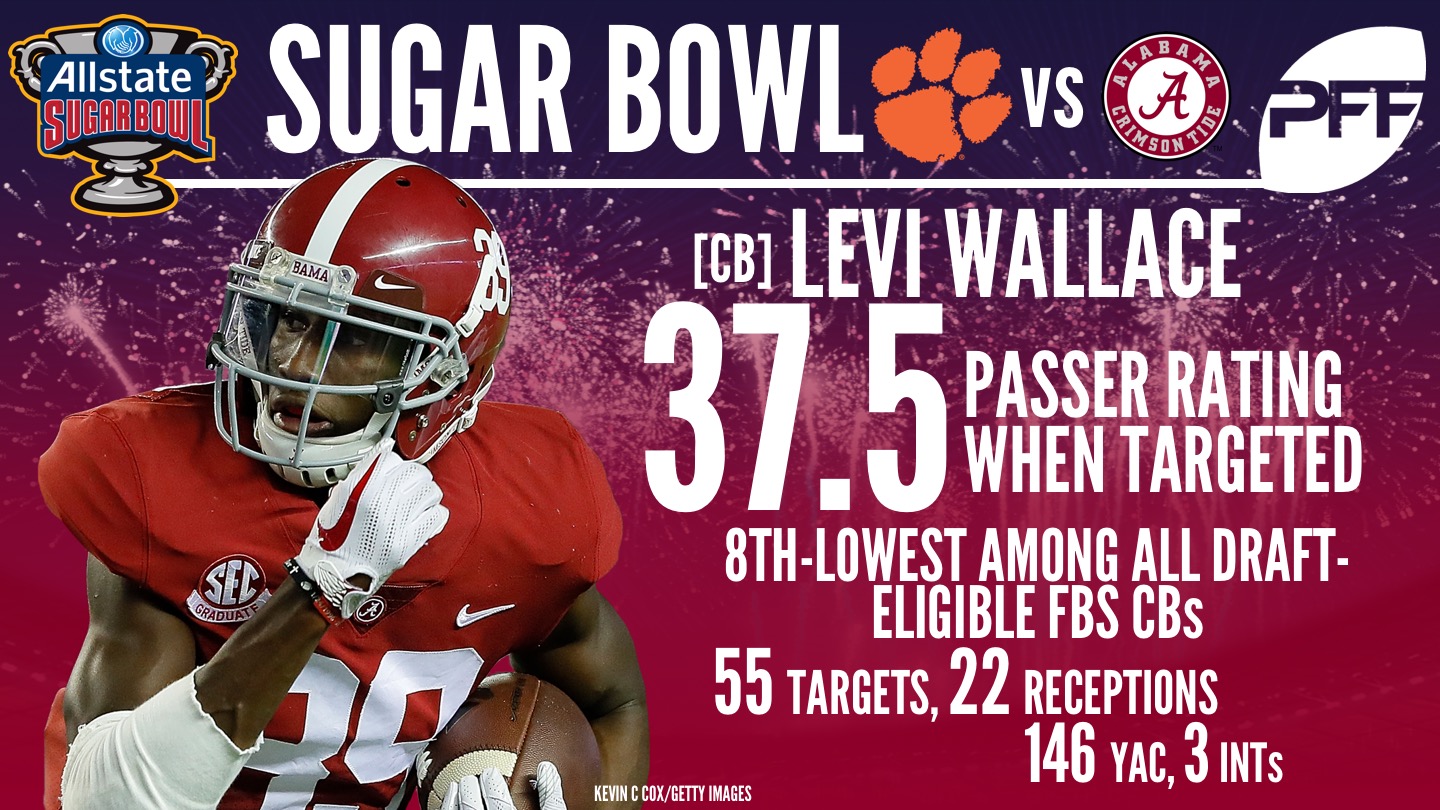 Perhaps 2017's biggest breakout story from a defense back position was the play of Levi Wallace, a former walk-on who dominated in coverage this season. Wallace was targeted 55 times as opposing offenses steered away from Fitzpatrick, but allowed just 22 receptions and fielded the nation's 14th-lowest passer rating when targeted at just 37.5 (a figure that is good enough for eighth-best among draft-eligible cornerbacks). – @PFF_Cam 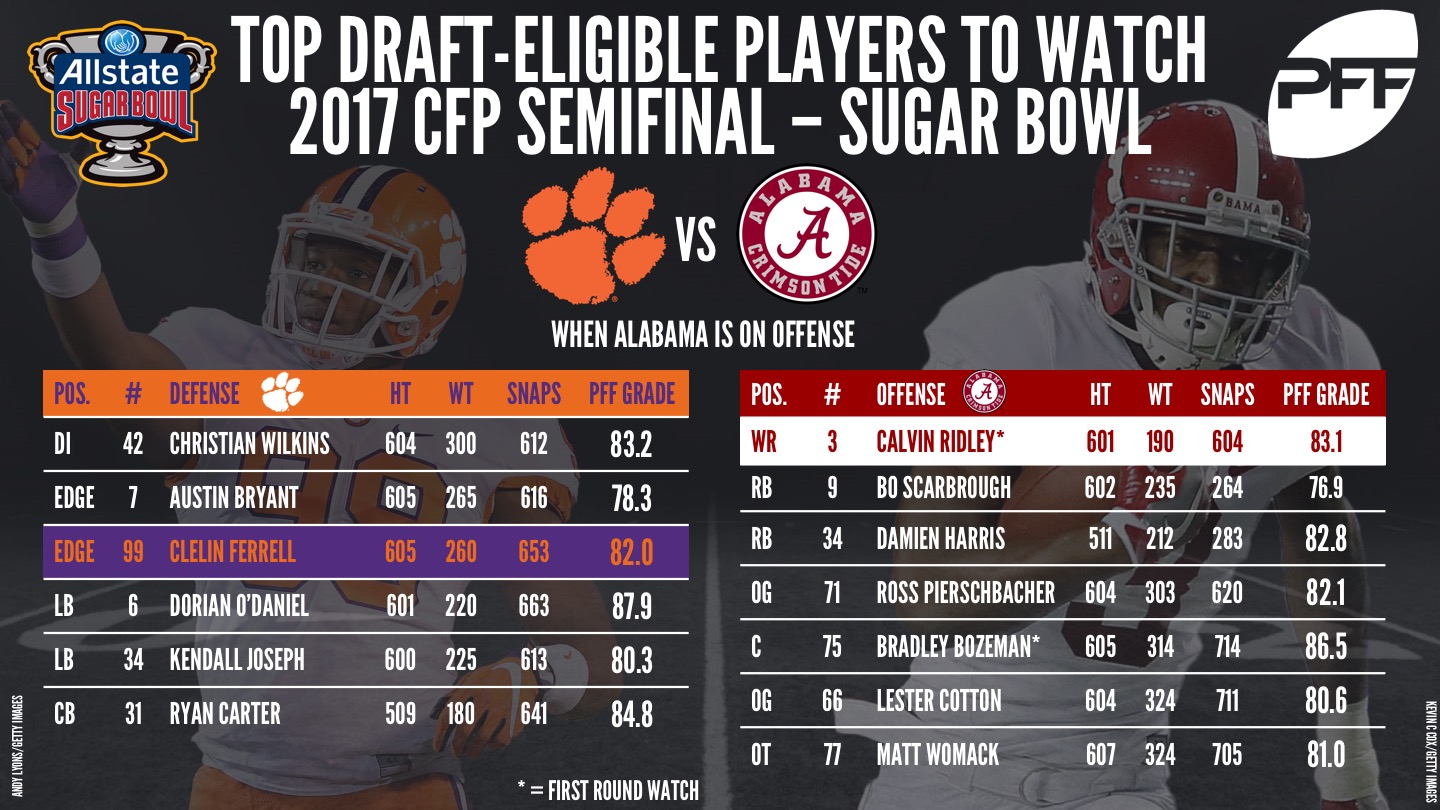 When Alabama is on offense:

Alabama wide receiver Calvin Ridley is one of the premier prospects at his position. Ridley’s yards per route run of 3.11 ranks 10th among all FBS draft-eligible wide receivers. The Crimson Tide also, once again, boast a deep group of productive running backs with Bo Scarbrough and Damien Harris, who has forced 23 missed tackles on his 110 attempts and his elusive rating of 116.4 ranks No. 2 among all FBS draft-eligible running backs behind only Stanford’s Bryce Love.

Center Bradley Bozeman has consistently been one of the better centers in college football over the last two seasons. This year being no different, he has only allowed one sack, no QB hits and three hurries on his 325 pass-blocking snaps while his pass-blocking efficiency rating of 99.0 ranks No. 11 among all FBS draft-eligible centers.

Outside of their defensive front pass-rushers, the Clemson defense boasts a cast and crew of talented linebackers and secondary members. Dorian O'Daniel is the highest graded of the group of draft-eligible players as he was a menace to opposing offenses this year. O'Daniel rushed the passer just 50 times, yet recorded five sacks, three QB hits and 11 hurries for 19 total pressures. He was targeted in coverage 42 times but allowed only 26 receptions and only two passes over 11 yards all season long. For his career, he has been targeted 68 times, allowed 43 receptions and just a 63.4 passer rating into his coverage. 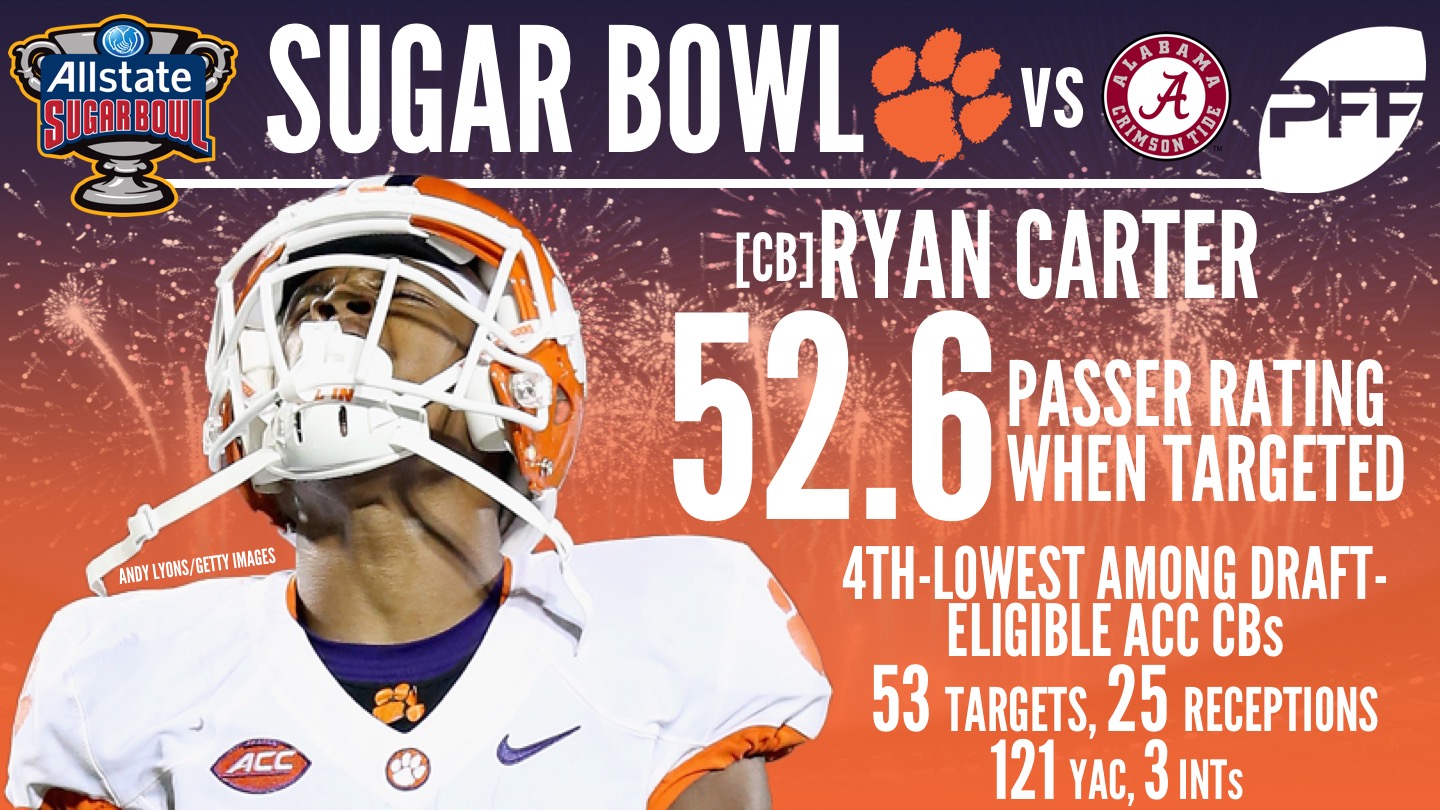 Cornerback Ryan Carter allowed just a 52.6 passer rating as the primary coverage defender, allowing just 25 catches on 53 targeted passes. He brought down three interceptions and recorded another six pass breakups this season as for the second consecutive season has seen a passer rating of lower than 53.0 into his coverage. – @PFF_Cam