The Buffalo Bills are still in the first full year of new General Manager Brandon Beane’s tenure in Western New York as he took over shortly after last year’s draft, after the Bills fired Doug Whaley. Beane previously played a large part in running the draft for the Carolina Panthers

The Bills have substantial draft capital to spend, since they have two picks in the first-round (picks 12 and 22), as well has two second-round picks (53 and 56). Picks 12, 22 and 56 were in exchange for left tackle Cordy Glenn (sent to Cincinnati along with the 21st pick), the right for the Chiefs to draft Patrick Mahomes and Sammy Watkins (Los Angeles Rams). After forgoing the option to pick a quarterback in 2017, the Bills have made it relatively clear they are willing to package draft picks to trade up to get a quarterback in 2018 after they have been trading proven veteran players to acquire draft capital.

In addition to Glenn, starting quarterback Tyrod Taylor was traded to the Browns for the first pick of the third round, which gives the Bills six picks in the first 96 of the draft. While Buffalo gave up a third- and seventh-round pick that they sent to the Carolina Panthers to acquire wide receiver Kelvin Benjamin, they still retain a sixth-round pick from the Jaguars from the Marcell Dareus trade.

After trading Watkins and allowing Robert Woods and Jordan Matthews to leave via free agency the last two offseasons, the Bills are left with Benjamin (79.1), second-year player Zay Jones (43.6), and journeymen Andre Holmes (58.1) and Brandon Tate (63.3) catching passes from the wide receiver position. Using our Wins Above Replacement (WAR – roughly the number of wins a team gets from replacing an off-the-street player with the player of interest) metric as a model, Jones was the second-least-valuable player from the 2017 NFL draft that played a season ago (to DeShone Kizer). As such, it would be wise of the Bills front office to use a pick or two on a wide receiver to give more weapons to whomever is behind center for them next season.

On the other side of the coin, the Bills selected PFF’s Rookie of the Year in Tre’Davious White in the first round last year, and he responded by generating the rookie classes second-most WAR. Even with White and veterans Vontae Davis (45.2) and Phillip Gaines (35.9) in the fold, the Bills could still use a player on the outside, and also have needs in the front-seven of their defense at edge and linebacker, although the former became less of a need with the free agent signing of Trent Murphy. The 2018 draft class is filled with serious top-end linebacker talent should the Bills look there. 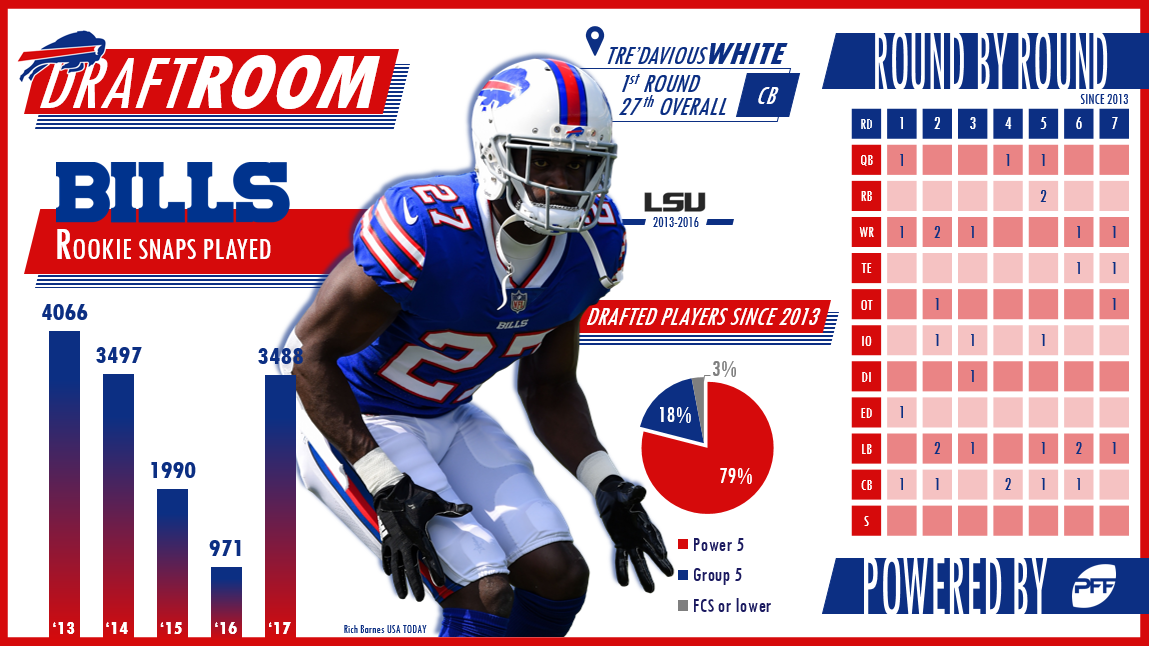 Overall WAR of drafted players for the Bills: 28th

92.0 PFF grade in his rookie year, won PFF Rookie of the Year.

87.5 PFF grade in his rookie year, traded to Philadelphia for LeSean McCoy immediately after.

Never received a PFF grade above 53.0 during his time in Buffalo, lost starting job in 2014 to Kyle Orton.

Averaged an interception every 9.7 dropbacks during his rookie season, earning PFF grade of 45.3.