The No. 24-ranked Miami Hurricanes stepped up against a high-powered Toledo squad on Saturday afternoon, cruising to a 49-24 victory in Ohio. A variety of skill players on offense fueled the Hurricanes victory as they kept the ball out of Toledo's hands to the tune of a distinct 35:29-24:31 advantage in time of possession.

Quarterback Malik Rosier finished with an overall PFF grade of 90.1, a season-high for him, as he aired the ball out more against the Rockets than he had all season long. He finished with a hefty 14.1 average depth of target and 56.5 percent of his passes were targeted past the first down markers. It didn't all come up roses for Rosier throwing the ball, however, as he was bailed out by his receivers at times and still finished with an adjusted completion percentage of just 63.6 percent and only two big-time throws to his name.

Rosier really shined in the designed running game as he tallied eight carries, 72 yards, three touchdowns and two missed tackles on designed carries. He gained another seven yards on a scramble to give him 79 total rushing yards on the afternoon.

Joining Rosier in the rushing stat sheet was DeeJay Dallas, who finished with game highs in attempts (17), yards (110), yards after contact (90) and missed tackles forced (6). 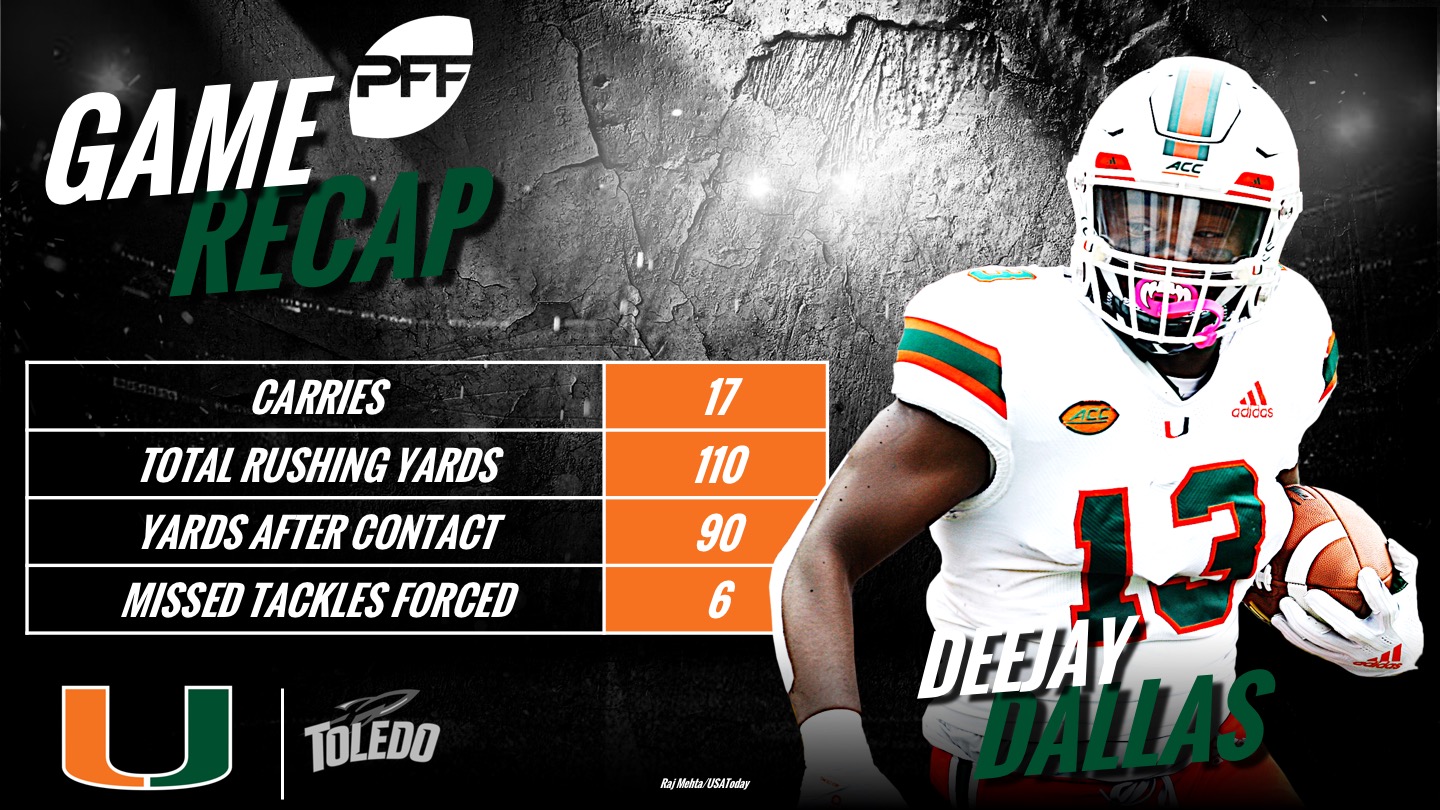 All told, the Miami rushing attack led by Dallas and Travis Homer gained a whopping 267 total yards on the ground and game-clinching 19 first downs over the game's four quarters.

Aside from the rushing attack, Miami also saw big performances from a couple of emerging receivers in South Florida.

Wide receiver Jeff Thomas saw a team-high eight targets, hauling in five receptions for 105 yards and a touchdown. Most importantly, Thomas (and the rest of his fellow receivers for good measure) did not drop a catchable pass all game long. 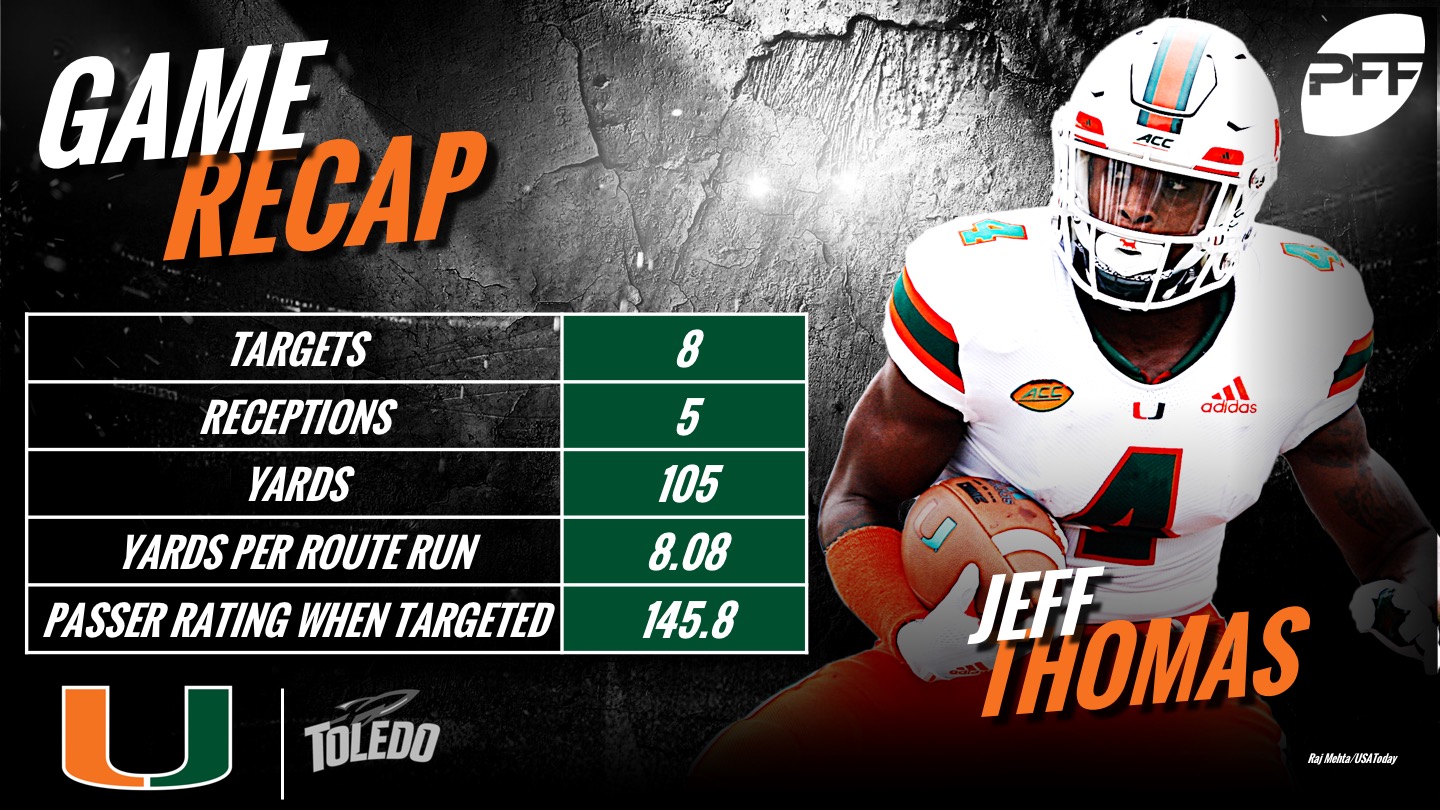 Toledo closed the gap to within one score on two separate occasions in the third quarter but thanks to a couple crucial first downs and timely touchdowns from Dallas and Lawrence Cager sucked the life out of the Rockets. The defense did the rest to close the game in the fourth quarter.

Leading the charge on the defensive side of the ball was Gerald Willis III who finished with an overall PFF grade of 88.0 and recorded four defensive stops in the run game without missing a tackle. He rushed the passes on 26 snaps, winning his 1-on-1 matchup 23.1 percent of the time and bringing in four total QB pressures with an additional two pass breakups on the afternoon.

In coverage, Toledo WR Diontae Johnson may have gotten the better of the secondary but the Hurricanes as a team did a great job of limiting Cody Thompson and Jon'Vea Johnson. Combined,  Thompson and Jon'Vea saw five targets and only three receptions for 37 yards with the other two passes going down as an interception and another pass breakup by Romeo Finley.

Overall, the Hurricanes and their fans should feel good about the contest and outcome against Toledo, specifically about their ability to hold on to the ball in the run game with both Dallas and Rosier carrying the load. Combine Rosier's solid day passing the ball and you have the making of an offense that can compete with most defenses in the ACC.