Off-ball linebacker is one of the deepest position groups in the 2018 NFL Draft class, both in terms of elite talent and all-around depth. As many as four could hear their names called on Thursday, Day 1, with a host of others expected to be selected on Friday.

A common theme among the class is versatility, the ability to rush the passer is certainly an added bonus, but coverage skills have become absolutely essential for the modern linebacker, and this class has a number of prospects who specialize in this discipline. Here are 10 of the top linebackers in this class, and some of the teams that appear to be among the cleanest fits for them. 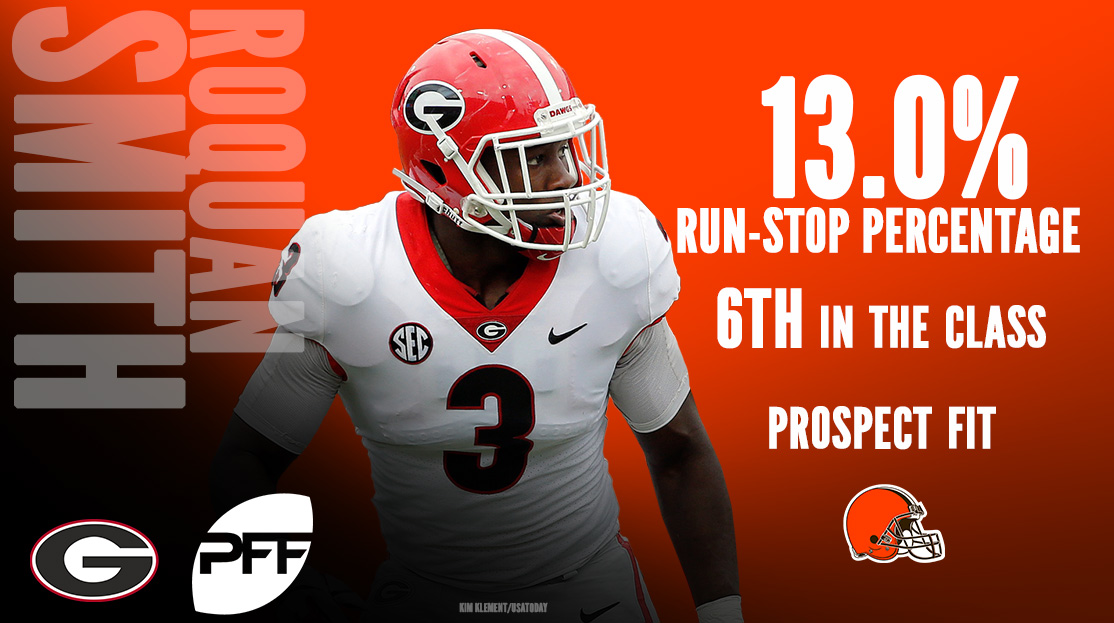 Our No. 1 off-ball linebacker in the class, Smith is a true three-down player capable of performing at a high level not just as a run-stopper, but as a pass-rusher and coverage defender as well. On just 54 blitzes last year, he racked up eight sacks, 22 total pressures and finished sixth in the country with a run-stop percentage of 13.0. His outstanding coverage grade of 88.5 from 2017 would be especially welcome in Cleveland, as Joe Schobert’s 70.7 grade in the category was the best among Browns linebackers by more than 15.0 points, but ranked just 35th in the league last year.

Last summer, we identified Edmunds as a potential breakout player in 2017, and he did not disappoint. He showed significant improvement in all three defensive phases last year, most notably in run support where he topped his 2016 grade (73.0) by more than 13.0 points (86.7) last year. His outstanding combination of size and athleticism make him a true chess piece for whatever defense he calls home at the next level, and the Chargers would be able to utilize him both inside and on the edge.

Detroit’s linebacking corps has a collection of veteran role players, but no true starter to play next to last year’s first-round pick, Jarrad Davis. Vander Esch led all FBS inside linebackers last year in both run stops (57) and run-stop percentage (15.9 percent), and he also earned a strong coverage grade of 86.2. The awareness he displayed on passing downs at Boise State, combined with his natural athleticism, would be a huge boost to a Lions linebacking corps that has long-struggled defending the pass. 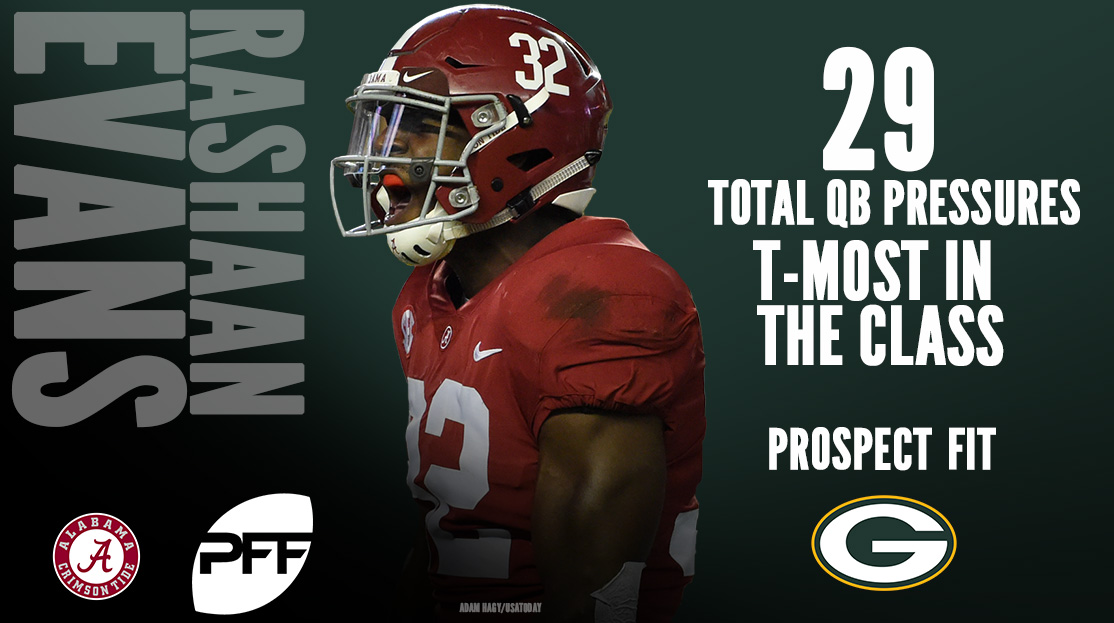 Both Jake Ryan and Blake Martinez posted run-defense grades over 80.0 in 2017, but neither ranked among the top 25 linebackers in coverage or in pass-rushing. The Packers also struggled to get consistent pressure off the edge, thus Evans’ diverse skillset would make him a huge add to the Green Bay defense. Last year, Evans posted 31 total pressures for Alabama, seven of them sacks. He also surrendered just 6.9 yards per reception into his coverage, with two pass break-ups and just one touchdown allowed.

2017 fifth-round pick Anthony Walker did not play a defensive snap in 2017 until Week 15 but is expected to take on a larger role in 2018. Regardless of expectations for him, there is little else in the Colts linebacking corps to be excited about. Antonio Morrison had significant struggles in his sophomore campaign in all three defensive phases, and no one in 2017’s group posted a coverage grade over 58.2. Jewell was a high-volume tackler for Iowa and impressed in coverage last year by not allowing a touchdown on throws into his coverage while forcing a total of nine incompletions.

Jefferson missed too many tackles in college (36 in three seasons), but his size and athleticism are ideal for the NFL level. One other weakness in his game, his unimpressive pass-rush productivity (he ranked just 69th among FBS linebackers in this category last year), would be unlikely to be a significant factor in Buffalo under conservative-minded defensive coordinator Leslie Frazier. Going his way however, Jefferson gave up just 3.30 yards per tackle in 2017, which ranked seventh nationally, and he did not allow a single touchdown into his coverage on 55 career targets.

With Steve Wilks at the helm now in Arizona, the Cardinals will be looking to round out the linebacking corps with another elite athlete. Baker is just that, as he ran a 4.53 40-yard dash at the combine and showed sideline-to-sideline ability at Ohio State. While Baker’s drop in play last season is reason for some concern and will prevent him from being a high pick, in two seasons as a starter for the Buckeyes, he amassed 76 total defensive stops to go with eight sacks, 10 quarterback hits and he also demonstrated the ability to mirror running backs and tight ends in man coverage. 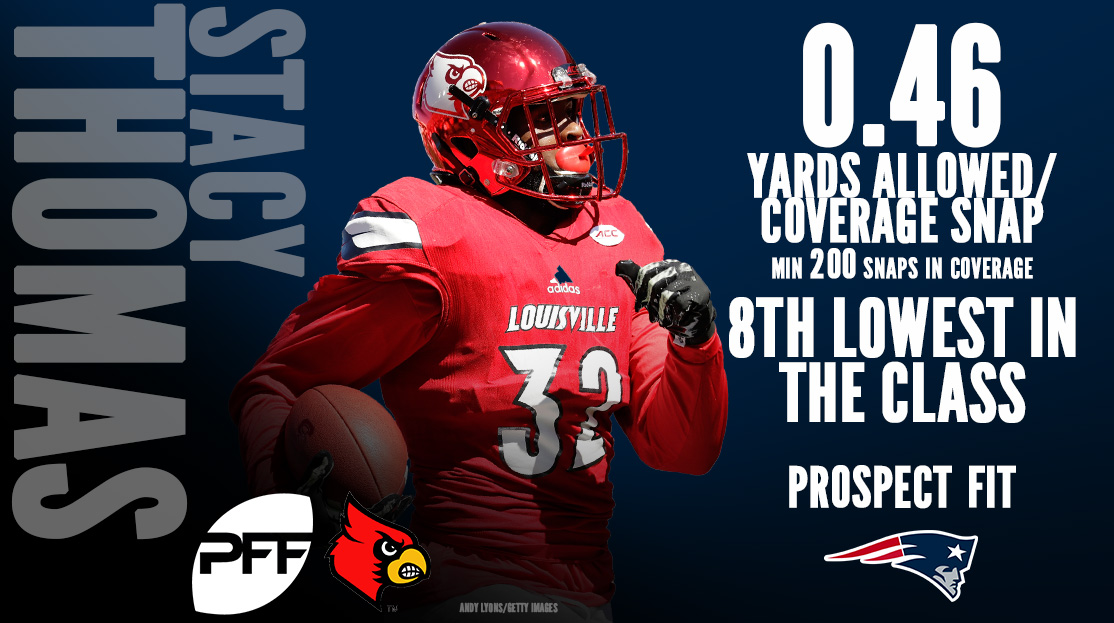 Thomas was an elite linebacker for Louisville in 2016, as he posted an outstanding overall grade of 91.2 due to elite grades in coverage and on run-defense. The Patriots' linebackers struggled last year without Dont’a Hightower and the team needs to add more talent and all-around playmaking ability to the unit. New England has the leadership in place to work with a player like Thomas, who missed time last season with a suspension due to a violation of team rules, and should be able to get the most out of a player who in 2016 posted 56 total defensive stops and gave up a passer rating of just 76.6 on throws into his coverage.

Raiders linebackers were responsible for eight touchdowns into their coverage last season, thus finding an athletic upgrade on passing downs is paramount for Oakland. While they could certainly target Roquan Smith with their pick at No. 10 overall, Moore actually graded better in coverage (88.7) than Smith last season. He missed all of 2016 with a herniated disc in his neck, but in his 2015 and 2017 seasons combined, he posted seven picks and three pass break-ups with no touchdowns surrendered into his coverage.

Darron Lee has struggled significantly during the first two seasons of his career, particularly in coverage, surrendering eight touchdowns into his coverage and a passer rating against of 120.7. O’Daniel played well in all facets for Clemson last season, but coverage was his specialty, as opposing quarterbacks had a passer rating of just 70.0 when targeting him. His lack of size will keep him from costing a high pick, which should work in New York’s favor, as they’re unlikely to want to give up completely on the former first-round pick Lee just yet with another big draft investment.