Both are true, though at PFF, quantifying the tape is our approach to gathering the biggest sample size possible in player evaluation. Especially with quarterbacks, the play-by-play evaluation is crucial, and then it’s all about diving into the PFF database to find the proper context for the player’s grade.

West Virginia QB Will Grier is one of the most polarizing prospects in the draft; the numbers love his game, but those more reliant on the eye test are not convinced he’s an NFL starter. I can see both sides of the argument as Grier’s numbers have been excellent over the last two seasons and he’s excelled in the right areas on a snap-to-snap basis, moving the chains with accurate passes down the field. However, it doesn’t always look pretty for Grier, who will flutter passes and look completely confused on certain plays, all while playing in the Big 12 where defenses provide easier passing windows than he’s likely to see at the next level.

Let’s take a look at the numbers and the film to diagnose Grier’s true skillset.

Starting with the short game, Grier missed the lowest percentage of passes on throws up to 20 yards last season, edging the other top quarterback prospects. Many of his throws come on easy play-action passes with an open middle of the field, but as we’ve shown at PFF, hitting open throws is one of the prerequisites for NFL success, and Grier ticks that box. He has a good, quick release when coming out of play action and run-pass options, aiding in this part of his game. 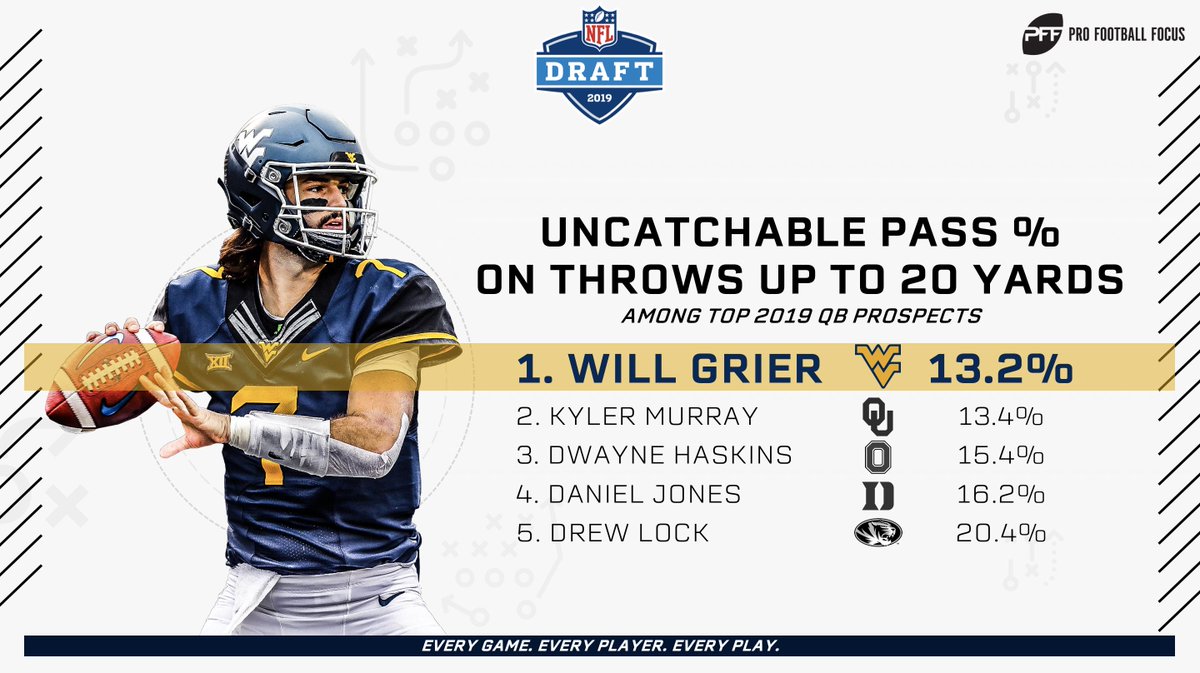 Over the last two seasons, only Oklahoma’s Baker Mayfield did a better job of throwing catchable passes than Grier on passes thrown up to 20 yards.

Grier tied for the lead in big-time throws a season ago with 33, showing his ability to throw the ball accurately down the field. He has fantastic touch on the deep ball, and he had plenty of opportunities to show it off in West Virginia’s offense. Over the last three draft classes, Grier has the highest PFF grade on “over-the-shoulder” passes, and that’s where we saw a big chunk of his big-time throws. 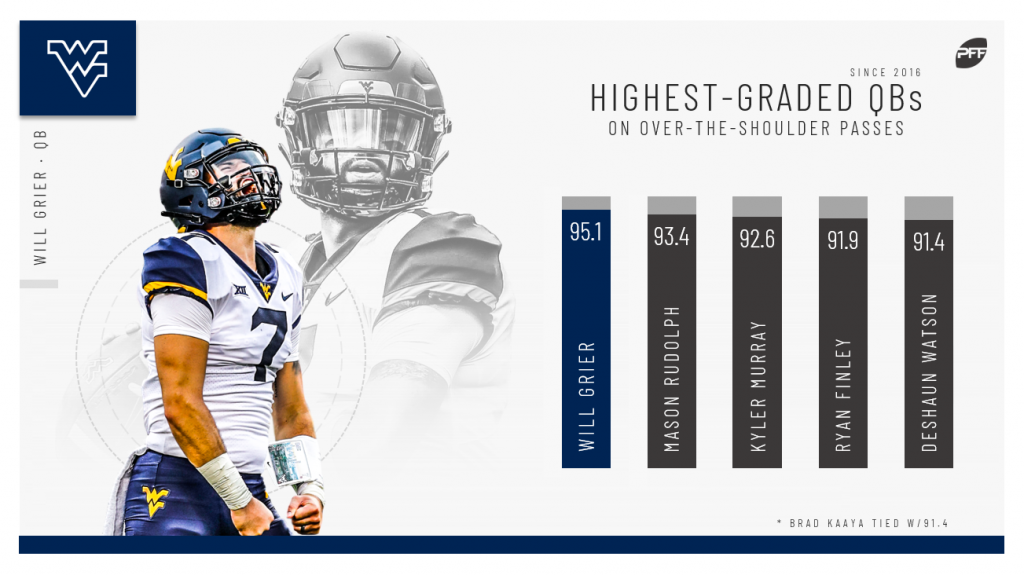 One of the best throws from any quarterback in the country last season, Grier shows off pinpoint accuracy for this game-winner against Texas, dropping the ball right in the back of the end zone for the touchdown.

We’ve highlighted the red-zone accuracy of both Kyler Murray and Dwayne Haskins in their individual breakdowns, and Grier has shown that he can make the necessary tight-window throws in in the red zone as well. Here, he squeezes the pass in with little margin of error against Tennessee.

Grier is as good as it gets in the draft class at executing big-time throws, whether dropping them in a bucket or throwing up the seam. I’ll have more on this in a bit, as there still a few concerns with Grier and his big-time throw profile projecting to the next level.

There are certain quarterbacks who can execute a good game plan at a high level, hitting all of the necessary throws and giving his team a chance to win. Grier is certainly capable of doing that, but when the defense shows something different post-snap, things can get ugly.

Take the play against Kansas, for instance, as Grier thinks he’s getting his usual clean read to hit the open post route against single coverage, but Kansas gives him a fuzzy post-snap read, and he throws the pass right into the coverage.

Beyond the scheme dependency, Grier struggles to create opportunities outside of the structure, and he posted a poor overall grade of 31.5 when he was forced to move off his spot in the pocket. 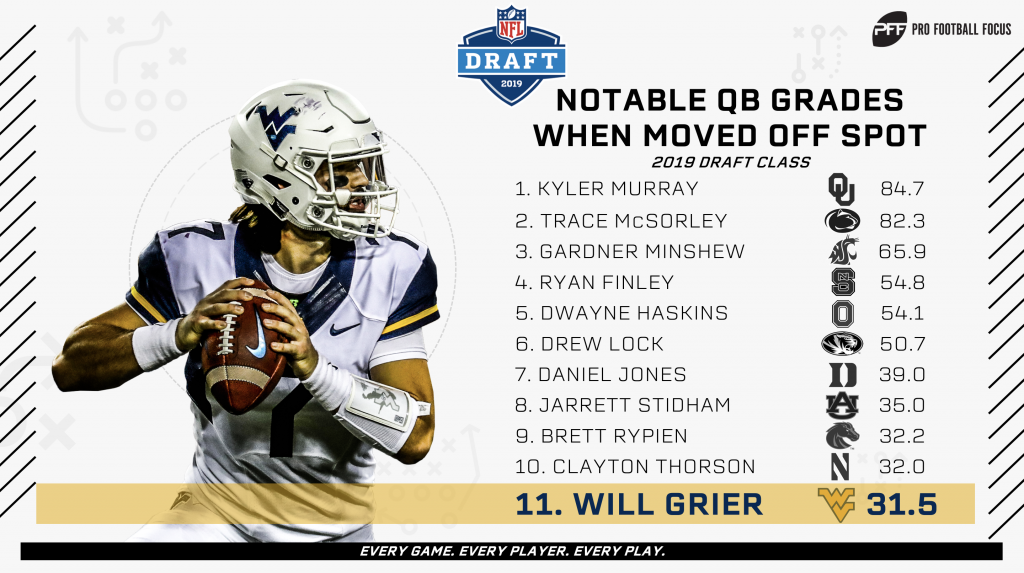 Grier also overrates his athleticism while maneuvering the pocket as he tries to create plays late in the down, but there were too many instances where he simply could not shake a defender, and he was taken down for a sack. He must eliminate these plays in order to increase his efficiency at the next level.

OK, let’s circle back to the over-the-shoulder throws. 62.9% of Grier’s big-time throws were of the over-the-shoulder variety, much higher than the NFL average of 41.2%. On the other hand, Grier did not have any big-time throws on “horizontal leads,” which includes deep outs, crossers and digs, all common NFL-style throws. This doesn’t mean that Grier can’t execute these passes, it’s just that we haven’t seen him do it. For further context, NFL quarterbacks throw 8.2% more horizontal leads than college quarterbacks and 3.0% fewer over-the-shoulder throws than their college counterparts. Essentially, Grier has excelled at executing throws that are far more common at the college level, so that must be accounted for in his projection.

There’s a lot to like about Grier’s game and certainly a few question marks. The differences in the evaluation are justified, as the numbers paint an impressive picture but the decision-making and scheme dependency are potential red flags. When watching Grier throw for throw, there are some similarities to Oakland Raiders quarterback Derek Carr as they’ve both showed the touch and the feel to creatively throw receivers open down the field, but there is also a healthy dosage of careless decision-making and questionable feel in the pocket. It’s never a perfect comparison, but there are some similarities in their respective games. When you add it up, Grier is a prospect that the data likes more than any quarterback in the class not named “Murray,” but the system and style in which he got there has raised enough red flags that our confidence level is not nearly as strong as its been for fellow Big 12 quarterbacks, Mayfield, Murray, or even Mahomes from recent years.