The Las Vegas Raiders and Denver Broncos, meanwhile, are without many top picks after acquiring Davante Adams and Russell Wilson, respectively. The Raiders have just one pick in the first three rounds, while the Broncos don’t pick until the end of the second round. 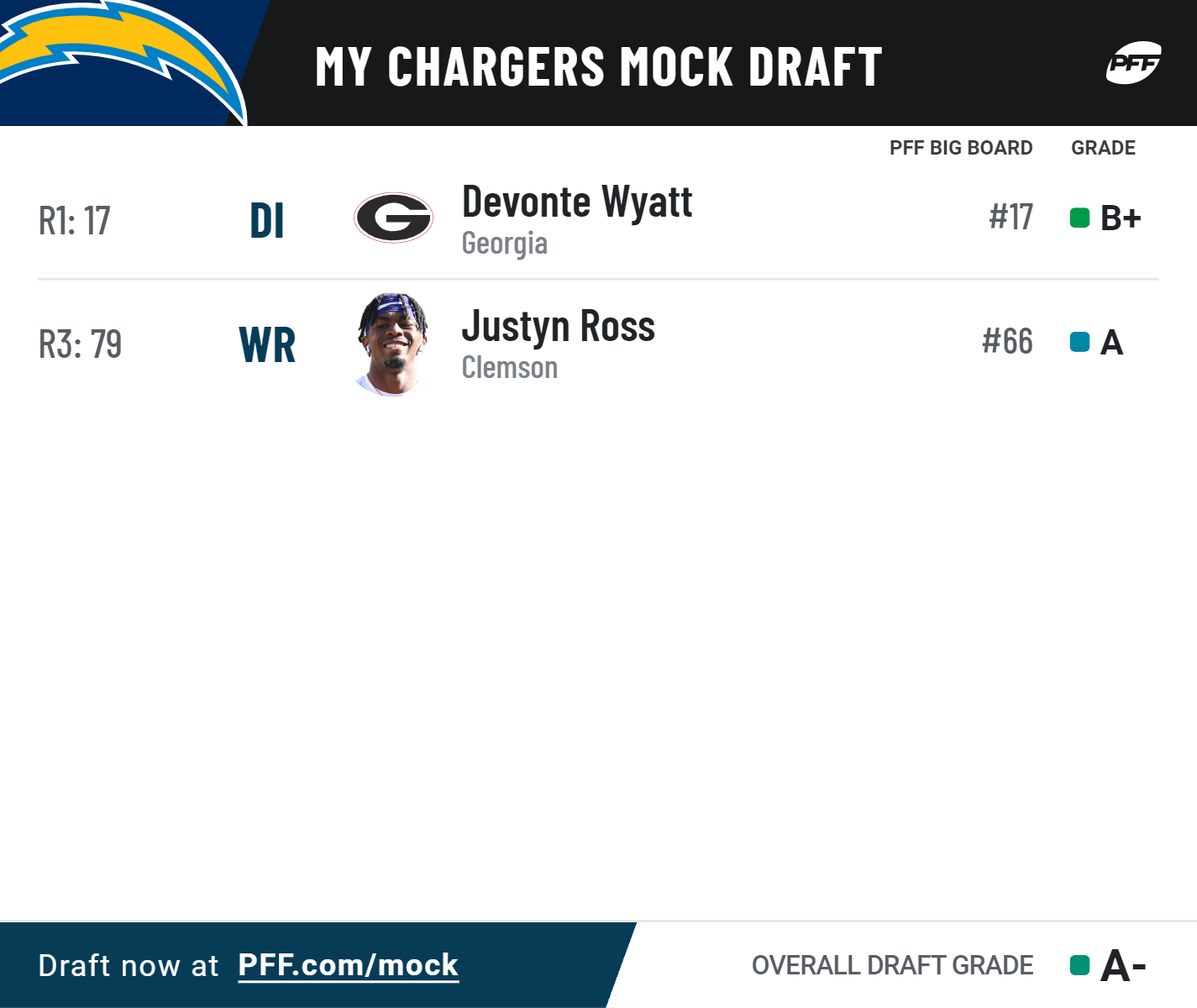 Because of their additions during free agency — trading for Khalil Mack, re-signing Mike Williams and signing J.C. Jackson and Sebastian Joseph-Day — the Chargers have put themselves in a good place to feel comfortable with any selection they make here.

With Joseph-Day in the fold, the Chargers take Devonte Wyatt, most likely the top three-technique interior defender in the draft. Joseph-Day played just under 50% of his snaps as a nose tackle in Chargers head coach Brandon Staley’s 2020 Los Angeles Rams defense. Wyatt would then fit slightly better at this pick than his Georgia teammate Jordan Davis, who played more nose tackle as a Bulldog. To be clear, both are good fits and both lined up across the interior of the defensive line in college, but the addition of Joseph-Day may indicate that the team is looking for more of a three-technique instead.

Los Angeles could also look for a right tackle in this draft, as that position was a sore spot for the team last season. Instead, the Chargers find a top receiver in the third round. Justyn Ross would easily be a first-round pick without his injury concerns. He missed all of the 2020 season with a spinal injury and had foot concerns by the end of the 2021 season when he made his comeback. Certainly, a pure speed receiver would help the team immediately, but with Keenan Allen turning 30 this season, the Chargers will eventually need someone to fill his shoes at outside receiver. 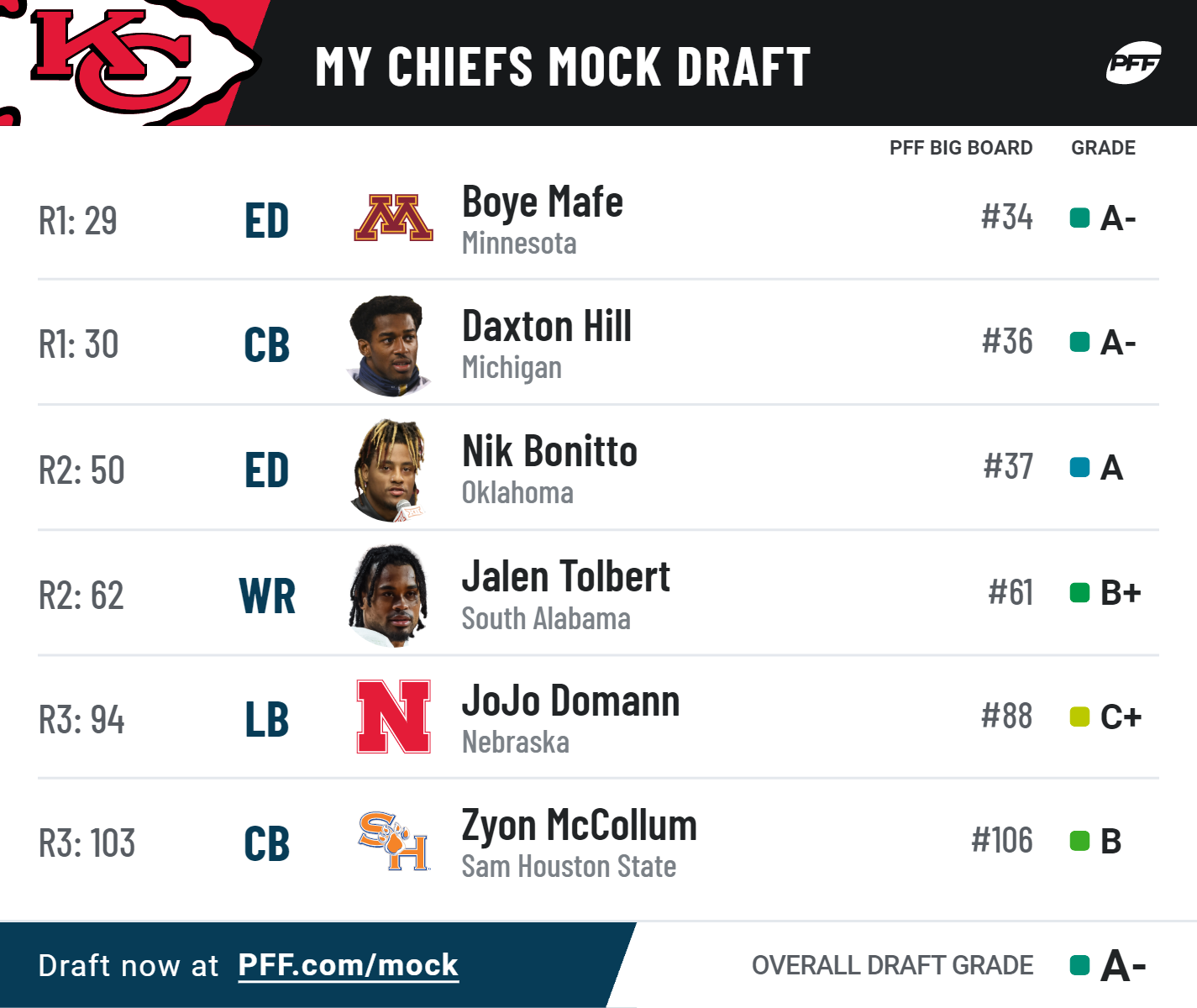 There is a scenario where the Chiefs replace Tyreek Hill with one of their two first-round picks. They could, but with the addition of Marques Valdes-Scantling in free agency, they still might focus on adding good players in positions of need on defense to start their draft. That's not to say “MVS” is Hill, but with Patrick Mahomes and Travis Kelce still on board, they can focus their attention on improving the defense.

In Boye Mafe, they turn their attention to fixing their edge pass rush. The team's trade for Melvin Ingram III last season worked, but he’s a free agent now, leaving the Chiefs with just Frank Clark as a starter on the edge. Mafe is a nifty pass-rusher who is not great against the run yet but has all the tools to get after the quarterback. Nik Bonitto in the second round with the 50th pick in the draft fits the same mold. Just like the Chiefs rebuilt their offensive line quickly and efficiently last offseason, picking these two players could fix their pass-rush concerns in one offseason, as well.

The Chiefs lost both Tyrann Mathieu and Daniel Sorensen in free agency, and although they added Justin Reid, they could still use some positional diversity in the secondary. Daxton Hill can provide that with his play as a safety and a slot coverage player.

Finally, they take a receiver with their second pick in the second round. Tolbert can play outside, and right now he’s a really good vertical runner. He could potentially replace what Sammy Watkins meant to the team's passing attack a few seasons ago.