2022 NFL Draft: Day 2 prospects who could pay off big, including Skyy Moore and Calvin Austin III

The likelihood of finding highly impactful players on Day 2 of the NFL Draft is less than it is on Day 1, but it isn’t impossible. Just take a look at Kansas City Chiefs center Creed Humphrey and Miami Dolphins safety Jevon Holland from last year’s draft class — both went on Day 2 and ended up as two of the top rookies in the NFL.

Here are 10 draft prospects who could pay off big on Day 2 of the 2022 NFL Draft. Only players who are almost certain to come off the board in Round 2 or 3 of April's draft were considered.

The highest-graded wide receiver of the 2021 college football season wasn’t any of the first-round prospects — it was Western Michigan's Skyy Moore.

The 5-foot-10, 195-pound receiver's 26 broken tackles after the catch tied for the most among wide receivers in 2021, and he ranked in the 95th percentile in separation percentage. Despite his smaller stature, Moore had no issue handling press coverage on the outside, ranking top-five in yards per route run on those reps last season at 3.58.

The cherry on top is his strong hands — the Western Michigan pass-catcher checked in with the largest hands of anyone at the Combine (10.25 inches) and dropped just three of his 125 targets in 2021 while catching eight of his 13 contested opportunities.

Bonitto has become an afterthought in this deep edge class. The former Oklahoma Sooner is likely to land somewhere in the middle of Day 2, largely because of the concerns with his strength and underwhelming size and length.

While those are rightful concerns, the 6-foot-3, 248-pound edge defender has some of the best pass-rush production over the last couple of years and is a high-level athlete overall. Since 2020, Bonitto has ranked first among all FBS edge defenders in pass-rush grade (94.6), pass-rush win rate (27.8%) and pressure rate (22.2%). He may serve as a designated pass-rusher to start, but he can provide value in that role.

Jones is likely to be the first interior defensive lineman off the board on Day 2 after Georgia’s Devonte Wyatt and Jordan Davis go in Round 1. The UConn product has brute strength that helped him become an unblockable force in all three of his seasons at UConn and at the Senior Bowl. Jones is coming off a top-five overall grade among interior defensive linemen (87.6). During Senior Bowl practice, the 6-foot-4, 326-pound interior defender earned a 92.2 pass-rush grade while leading the position in pass-rush win rate (42.5%).

McCreary has gone from likely first-round pick to Day 2 selection since the conclusion of the 2021 college season because of length concerns and underwhelming marks in athletic testing.

The Auburn corner checked in with 28 7/8-inch arms, which would be the shortest among all outside cornerbacks in the NFL right now. Whichever team takes him will likely try him in the slot — where he has played just 105 career snaps — as a result.

The good with McCreary is that he is an advanced corner prospect from a technique standpoint and has proven elite collegiate production. Just this past season, he was the highest-graded cornerback in the entire FBS and led the Power Five in pass breakups with 13. Since 2019, he is second to only Ahmad Gardner among FBS corners in coverage grade playing press. The physical traits are concerning, but McCreary has the experience, technique and mindset to succeed in the NFL.

Andersen is the best non-FBS defensive prospect in the 2022 NFL Draft class. He earned an 86.3 PFF grade for Montana State in 2021 and led the FCS in defensive stops (67). What makes that even more impressive is that it was his first full season at the position after playing running back and quarterback.

Andersen then proceeded to earn the highest PFF grade among off-ball linebackers during Senior Bowl practices and recorded a blazing 4.42-second 40-yard dash time and an eye-popping 10-foot-8 broad jump at the NFL Scouting Combine. He’s likely going to take longer than most on this list to develop, considering he is jumping from FCS to NFL and just moved to the position not long ago, but long-term, Andersen is a very promising prospect.

Tindall never started a game in his collegiate career and didn’t break the linebacker rotation until his fourth year on campus in 2021. Despite that, he was an instrumental piece to Georgia’s historic defense.

The 6-foot-2, 230-pound off-ball linebacker earned an 85.4 PFF grade across 474 snaps in 2021. He plays violently with picture-perfect blitzing technique, and his physical tools are off the charts. Tindall finished with 26 pressures on 105 such reps and an 81.5 pass-rush grade for the season. He’s like a heat-seeking missile tacking down ball carriers in space.

Tindall rose up some boards after a stellar combine performance that featured a 4.47-second 40, a 1.55-second 10-yard split, a 42-inch vertical, a 10-foot-9 broad and 4.18-second pro agility, but he’s still firmly in the Day 2 conversation with inexperience and still learning the position being the big reason why. There’s no denying his long-term potential, though, and if he lands with a blitz-heavy team, Tindall could outplay his draft status sooner rather than later.

Austin has elite track speed and quickness. His overall athleticism paired with his route-running and release package helps overcome his diminutive stature.

Austin is undersized, standing at 5-foot-7 while weighing 173 pounds with 30.6-inch arms. Still, that didn’t stop him from producing at a high level as an outside receiver at Memphis in 2021, as he recorded an 85.2 receiving grade, 2.99 yards per route run and 14 broken tackles on 74 receptions.

It also didn’t stop him from dominating at the Senior Bowl. Austin earned the highest receiving grade among qualifying wide receivers in practice and generated multiple steps of separation on over half of his targets against single coverage, forming the highest rate of such plays among all wide receivers in attendance.

This was a nice rep here — shuffle release, gets the CB to open his hips and rips back. Elite quicks and showed off his route-running ability and release package all week. pic.twitter.com/RGKhpnlgVm

Cross was one of the top underclassmen in the country in 2019 and 2020, ranking seventh in the Power Five in PFF grade when playing free safety. His overall mark dropped for 2021, though, as he made the move to a role that had him play closer to the line of scrimmage instead of where he was at his best at centerfield.

Cross has some special range, and his 4.34-second 40-yard dash at 212 pounds at the NFL Scouting Combine backs that up. The Maryland product could end up a Day 2 gem for a team in dire need of a deep safety.

Tom was quietly one of the best pass-protectors in college football last season. As a matter of fact, the Wake Forest Demon Deacon led all FBS tackles in pass-block grade for the season, allowing just 13 pressures in 14 starts, including zero to Jermaine Johnson II in their Week 3 showdown.

Tom is going to end up on the interior at the NFL level where he spent his first few years on campus before moving to left tackle in 2020. He’s already an advanced pass-protector and is a natural at using his hands independently. After a stellar collegiate career, Tom proceeded to light up the Scouting Combine. Don’t be surprised if he becomes a high-quality starter at the NFL level despite likely ending up a late Day 2 prospect. 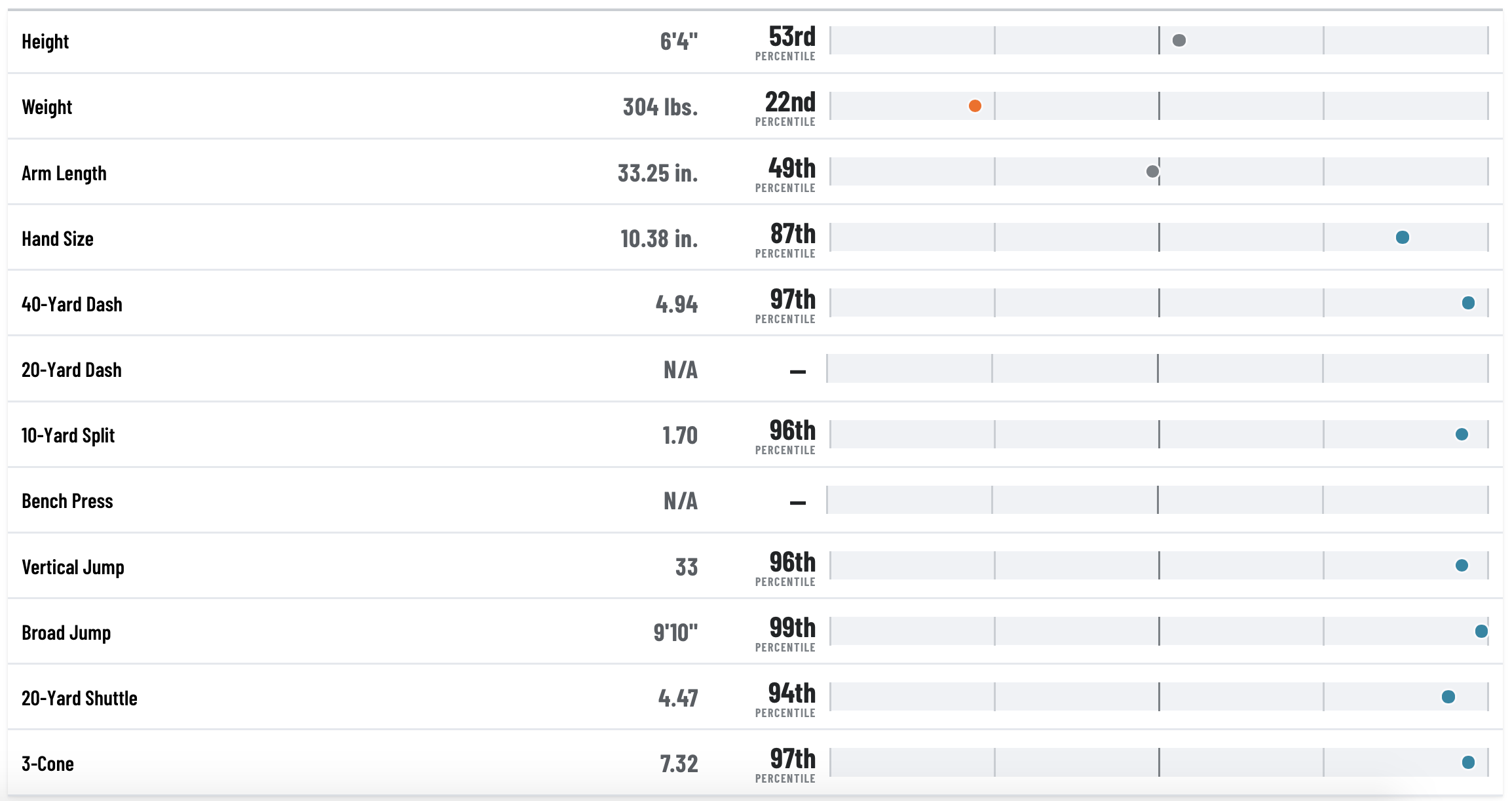 Fortner was one of the cleanest centers in the country last season. After spending the entirety of his collegiate career at guard, the Kentucky Wildcat kicked over to center for 2021, where he finished sixth nationally in PFF grade. He allowed a mere five pressures in 13 games, tied for fifth in total big-time blocks and was above the 75th percentile in negatively graded run-block rate.

The 6-foot-4, 304-pound lineman has over 2,300 snaps of experience at all three positions on the interior, something NFL teams will value. He may not be a rare specimen like Tyler Linderbaum, but Fortner is a high-floor projection to the next level and is in the top of the next tier of centers after the Iowa product on Day 2.