In dominating fashion, the Alabama Crimson Tide easily defeated the Arkansas Razorbacks on Saturday afternoon, 65-31. Quarterback Tua Tagovailoa put forth what could only be considered a Heisman front-running performance, tossing multiple touchdowns as he has yet to turn the football over this season.

Tagovailoa needed just 10 completions to gain 320 yards through the air, including four touchdowns and five additional first downs. His day was over relatively early despite this being a conference game as he was replaced by Jalen Hurts in mop-up duty early in the second half.

The vaunted Alabama offensive line kept Tagovailoa clean on all but two of his 15 dropbacks as he completed all 10 of his passes on his 13 clean dropbacks. He finished with a 91.8 overall grade from a clean pocket and an 87.0 overall grade for the game.

Imagine what Tua Tagovailoa's numbers would look like if he got to play more than just a half of football. pic.twitter.com/UjP8CZl8lS

Tagovailoa clearly wasn't just throwing short underneath passes as he attempted 10 of his 13 passes at least 10 yards downfield. He was 8-of-10 with three of his scores coming on passes thrown to the intermediate or deep range. He averaged a depth of 15.8 yards past the line of scrimmage on each of his passes against Arkansas.

Tagovailoa had great success targeting both Jerry Jeudy and Irv Smith, connecting with both for two scores each. Jeudy averaged 33.8 yards per reception as all four of his catches went for a first down or a touchdown. 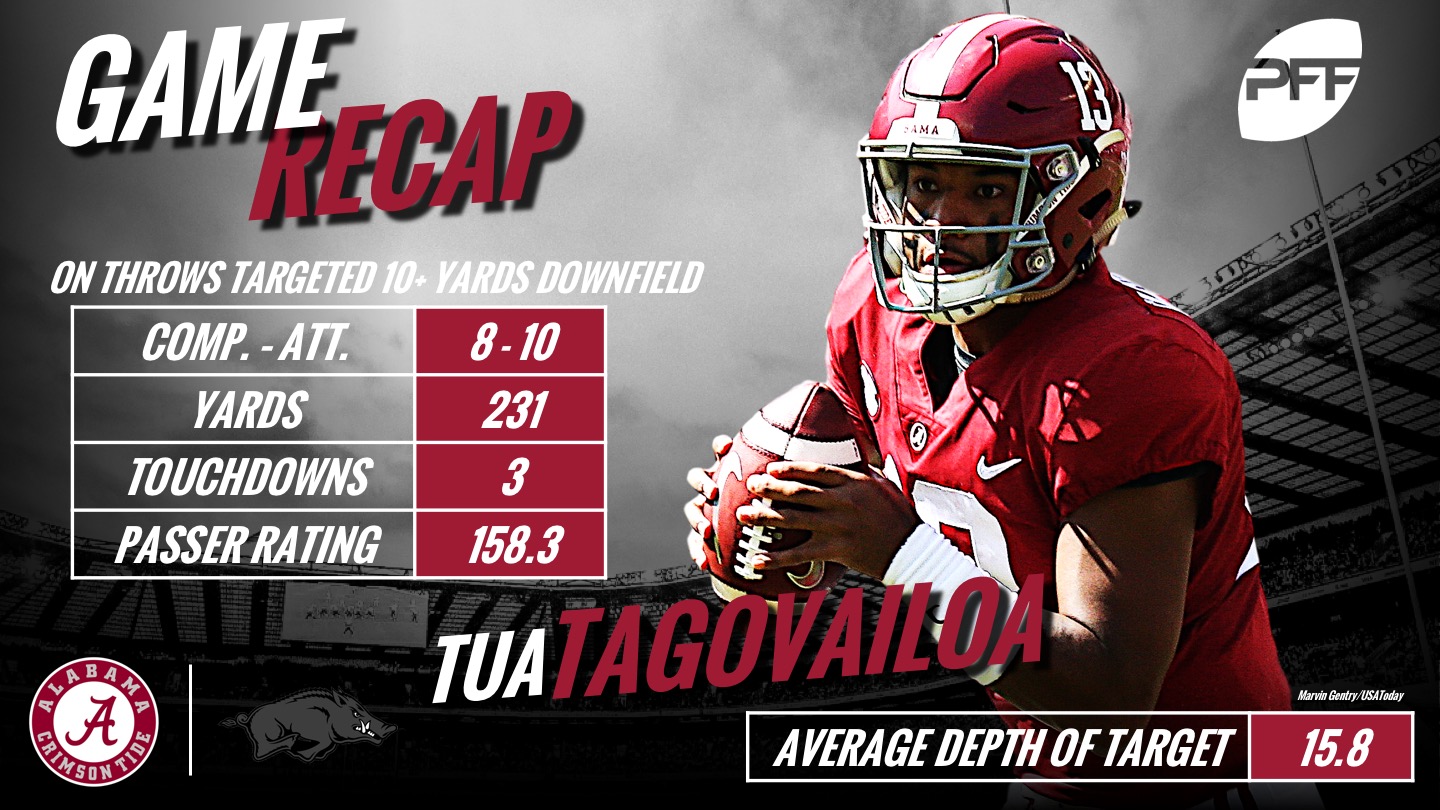 With a lead, Tagovailoa was also able to rely on a talented rushing attack who gained 244 total yards on 38 carries as a team. The Crimson Tide averaged 3.89 yards after contact as a team and scored an additional four touchdowns.

Sophomore linebacker Dylan Moses also had his best game of the season, tallying two QB pressures on nine pass-rushes while five of his 10 total tackle attempts went for defensive stops. He was targeted four times in coverage as well, allowing just two of them to be hauled in for a total of four yards while adding in a pass breakup.

With strong defensive performances dotting their proverbial ‘i' and Tagovailoa appropriately crossing their ‘t,' there is seemingly no bigger favorite to make it to the College Football Playoff at the moment.

And you can surely bet some hardware will follow.