Another edition of the tradition laced Georgia–Florida rivalry gets added attention this week with ESPN’s College GameDay in town in Jacksonville and Florida taking a leap forward in Dan Mullen’s first year at the helm. The winner looks to take pole position for the stretch run of a much more crowded SEC East race than what was predicted at the beginning of the season. Before the “party” begins this Saturday, let’s examine the details of this big-time matchup as only we at Pro Football Focus can.

This Florida-Georgia preview is brought to you by Eckrich, the Official Smoked Sausage of both the Florida Gators and the Georgia Bulldogs.

Will Georgia be able to bring down Jordan Scarlett and Florida’s RBs?

Georgia has been among the best tackling teams in the nation each of the last two seasons, and 2018 has been no different as they are currently the No. 1 team in tackling grade (94.0) having only missed 31 tackles through seven games. However, even though they only missed six tackles against LSU, those misses led to big plays for the Tigers. In fact, 216 of LSU’s 298 yards on the ground came after contact, including 106 yards on two big runs, one by Clyde Edwards-Helaire and the other by QB Joe Burrow, that set-up short touchdown runs instead of being minimal gains in the middle of the field.

In addition to using QB Feleipe Franks in the run game, the Gators rotate backs Jordan Scarlett (70.0) and Lamical Perine (76.0), while also getting Dameon Pierce (77.7, 53 snaps) some time as well, and have worn down opposing fronts in the second half of games. All are hard to bring down but especially Scarlett. He has avoided 26 tackles thus far in 2018 and his elusive rating of 135.0 ranks second in the SEC behind Mississippi State’s Kylin Hill.

RELATED READING: The top-5 highest-graded SEC defenders at every position.

Which QB will get pressured?

This is an interesting dynamic to follow during the game as its strength against strength and weakness against weakness. Even though its primarily two players, Florida gets after the quarterback at a high rate. Their overall pass-rush grade is 12th in the FBS, led by edge defenders Jachai Polite (88.7) and Jabari Zuniga (67.6). The two have combined for 45 total QB pressures (nine sacks), with Polite leading the way. He is currently third in the SEC in total pressures and has the second-best pass-rush grade at 90.8 (fourth overall nationally among edge defenders). Zuniga has 21 total QB pressures, which is tied for fifth in the SEC. They will, however, be going up against one of the better offensive lines in the country. Georgia’s pass-block grade overall is fifth nationally and their pass-blocking efficiency is third in the SEC (and 28th overall as they've allowed just 28 total QB pressures allowed).

On the other side, the Bulldogs do not frequently get to the quarterback as their 75 total QB pressures is next to last in the SEC, only ahead of South Carolina’s 56. In fact, only edge defender D’Andre Walker (83.8, 21 total QB pressures) has double-digit pressures, with interior defensive lineman Tyler Clark (88.9) second on the team with eight total QB pressures. While most teams have thrown short and quickly against them, evidenced by their average depth of target of 7.2 yards (second lowed in the FBS), the Bulldogs still have not consistently pressured quarterbacks. This bodes well for the Gators as, even though their line has played over 8,100 career snaps between the five starters, they are not the best at protecting their quarterback. Their pass-blocking efficiency is ninth in SEC and 64th in the country, as they’ve given up 41 total QB pressures.

In short, yes as Georgia has an advantage in this area. CJ Henderson (77.4) has been good with a 77.0 coverage grade and a 37.3 passer rating when targeted, but true freshman Trey Dean (56.3) has given up yards in bunches in coverage (55.6 coverage grade, 79.0 passer rating when targeted). With Todd Grantham’s traditionally blitz-heavy scheme, there should be ample 1-on-1 opportunities for Mecole Hardman and Riley Ridley to make plays if the quarterback is given time. Ridley’s 151.5 passer rating when targeted is actually seventh among all FBS receivers.  Brad Stewart (90.1) and Donovan Stiner (72.9), and their ability to cover will help at safety, but it will be interesting to see if this advantage comes to fruition. 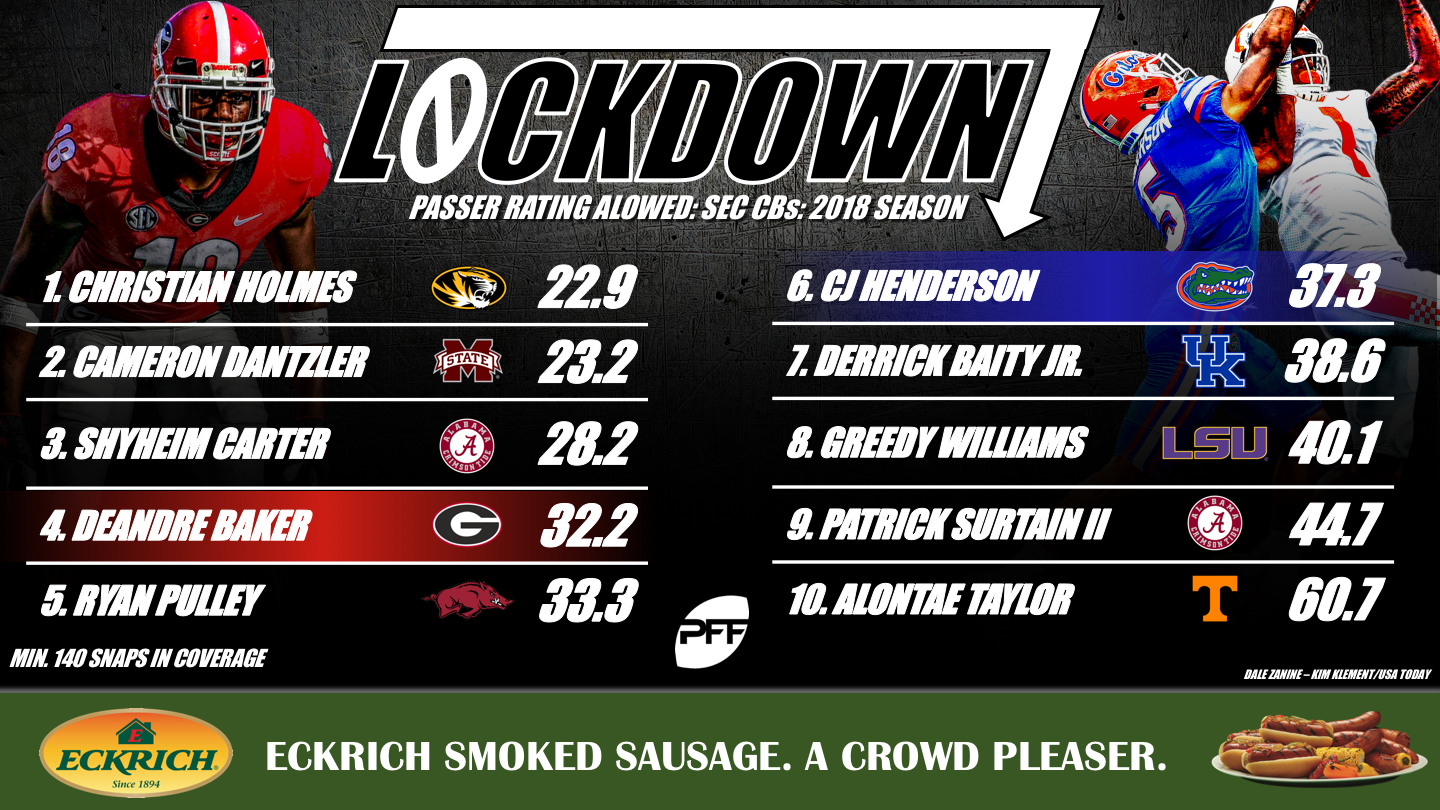 How will Feleipe Franks play?

Last season was one to forget for Franks, especially against Georgia. He finished the game 7-of-19 for 30 yards and an interception accumulating an overall 44.4 game grade. In the passing game, Georgia’s defense is just as strong, led by our No. 1 corner, Deandre Baker (91.3) who has allowed zero touchdowns to go along with eight pass breakups and a 32.3 passer rating allowed into his coverage. Expect Franks to follow in LSU’s footsteps and target true freshman CB Tyson Campbell (8 receptions allowed on 12 targets for 153 yards against LSU) early and often. As long as Franks can stay away from game-changing mistakes, Florida should be in a position to be in the game throughout.

What happens at QB for Georgia?

Based on how they’ve used true freshman Justin Fields (90.0), it clearly appears this is still Jake Fromm’s team. However, Fromm is coming off a game against LSU (51.9 grade) that ended up as the second-worst grade of his career, only behind his first start at Notre Dame last season. Interestingly, two of Florida’s three worst run-defense graded games were against running quarterbacks (Terry Wilson of Kentucky and Nick Fitzgerald of Mississippi State). Thus, Fields and his ability to run (79.5 rush-grade, 7.7 yards per attempt and 11 combined TDs+first downs) might be given even more opportunities if Fromm struggles. 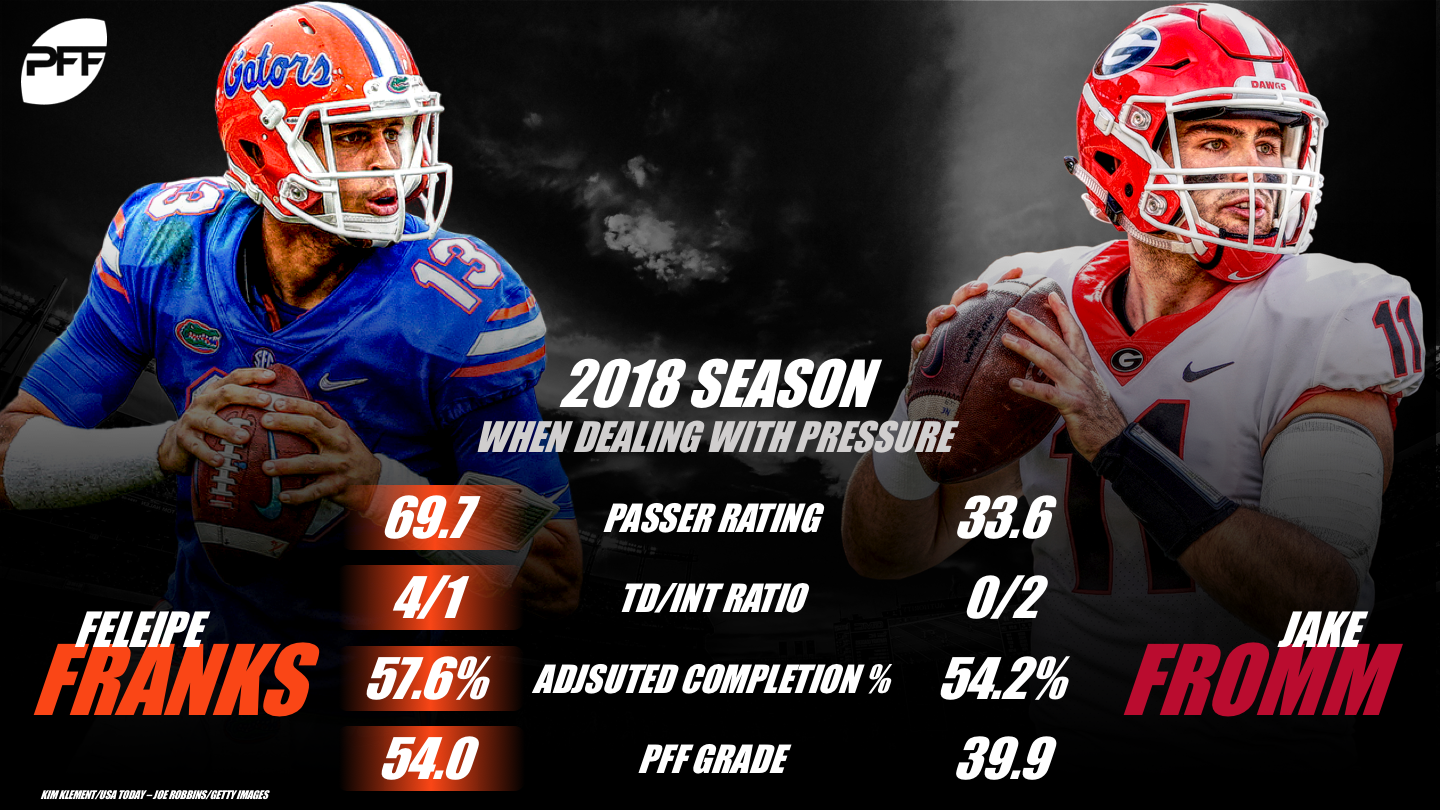 In the end, the “party” is back and Jacksonville, Florida will be the site of college football’s game of the weekend!