After grading and analyzing every player on every play of every game during the 2018 college football season, it’s time we unveil the 2019 Preseason PFF All-ACC first team, second team and honorable mention for every position on offense and defense as well as for the first time ever, specialists.

The Preseason All-ACC list may differ a bit from any year-end look back at the previous season as we project to the 2019 season ahead of us. Find out which of these athletes made the PFF All-American team as well. 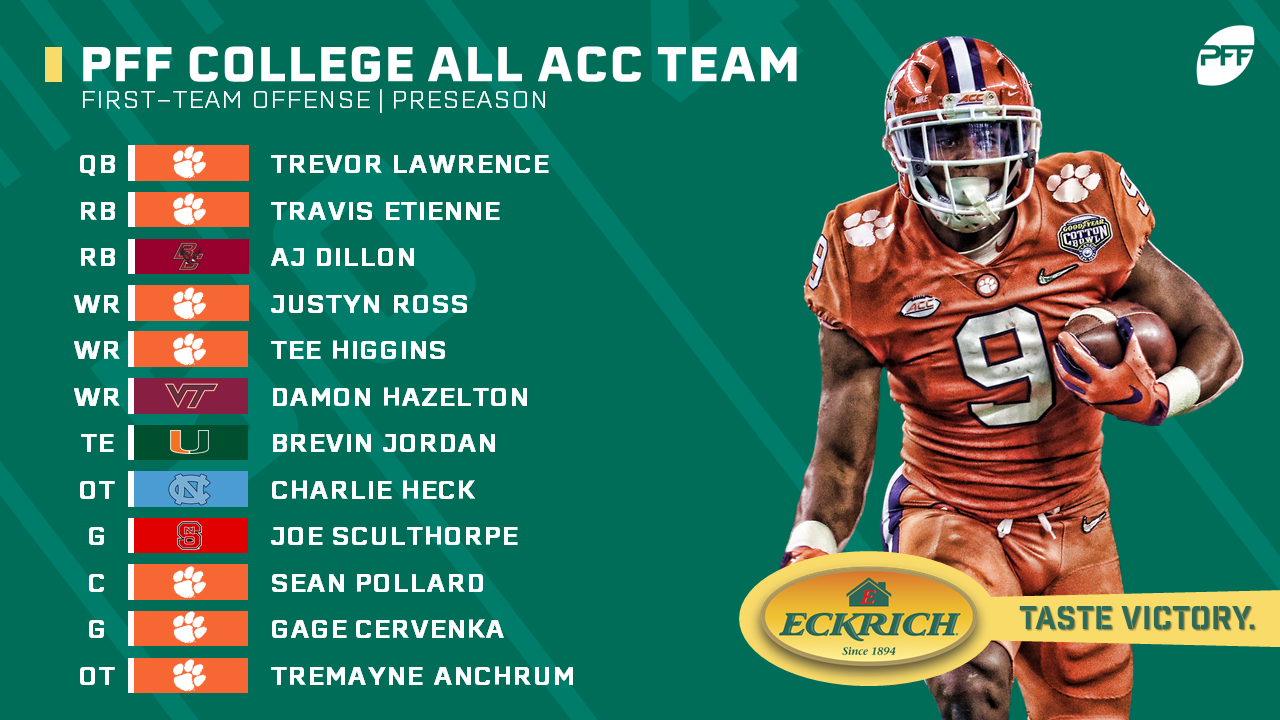 Lawrence peppers the field with top-notch throws as he beautifully navigates the Clemson offense on their National Title defense. He's the highest-graded true freshman quarterback we've ever seen at PFF.

The highest-graded running back from the past two years, Etienne is a threat with the ball in his hands and averages over 8.0 yards per carry.

Dillon is eighth among active Power-5 running backs with 717 yards after contact a season ago and he's now forced 117 missed tackles over the past two seasons.

Ross is arguably the best receiver in football, in a stacked receiver class we haven't seen the likes of in some time. Lawrence to Ross for the next two years, please.

Higgins has forced nearly as many missed tackles after the catch (16) as he has brought down contested catches (17) and has averaged the nation’s second-highest yards per route run since 2017.

Hazelton averaged 15.7 yards per catch last season and 36 of his 51 receptions moved the chains or scored a touchdown in the Tech offense.

Jordan forced seven missed tackles after the catch, third-most among active tight ends in the Power-5 and he'll be a vital component over the middle for Jarran Williams in 2019.

Heck possesses the 10th-highest pass-blocking grade among returning Power-5 tackles as he allowed all of 14 pressures across 433 pass-blocking snaps last year.

The fifth highest-graded guard in the Power-5, Sculthorpe also holds the third-highest run-blocking grade in that same group.

Pollard kicks inside to center for his final season with the Tigers as he's allowed all of 10 career combined sacks and hits along 877 snaps in pass protection.

While he didn't allow a single hit or sack on the quarterback last year, it's Cervenka's run-blocking that vaults him here as he owns the Power-5's second-highest run-blocking grade at the position.

Anchrum gets it done solidly across the board, both in pass protection and in run-blocking where the latter is a top-25 mark among Power-5 tackles. 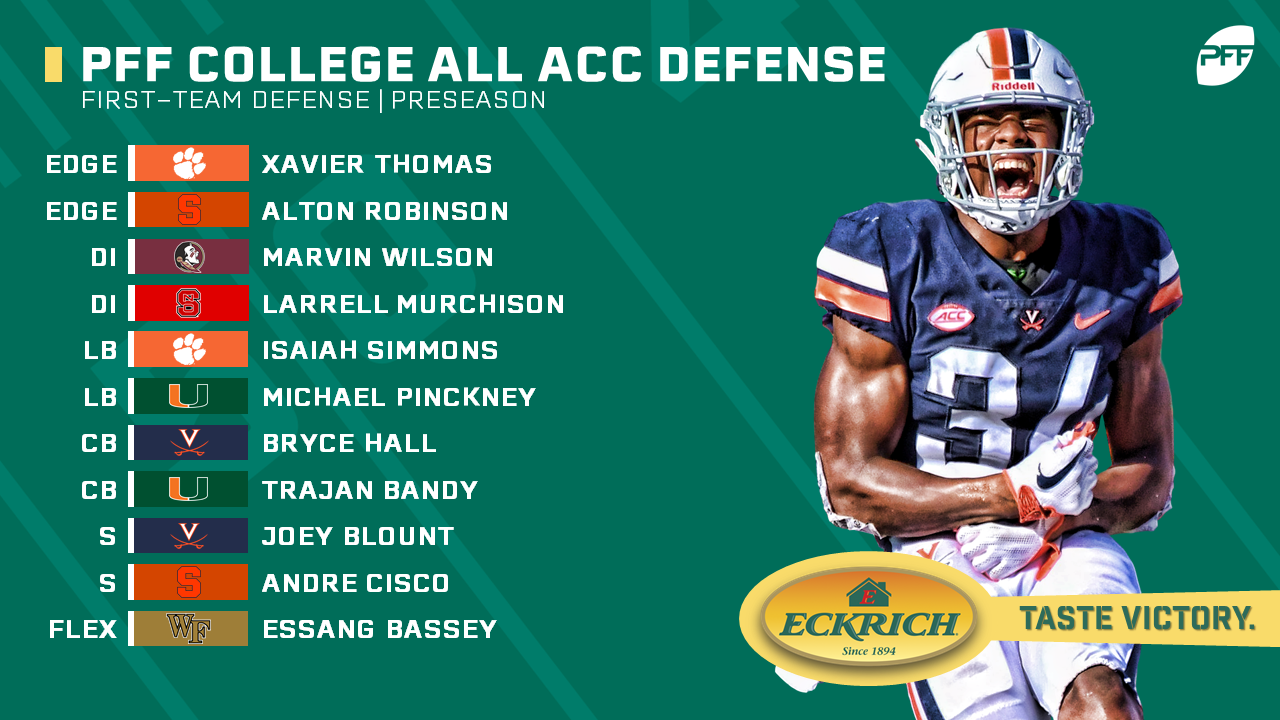 Robinson was a sack away from the pass-rush triple-double last season but still ranks third among Power-5 edge defenders with 56 total pressures last year.

Returning with 34 total pressures and 23 defensive stops to his name, Wilson is fully entrenched in the top interior defender in the entire country discussion.

Excelling at all facets in the game, Simmons is a dominant college linebacker in coverage. On 59 targets a season ago, he allowed just 1 touchdown and forced nine incompletions.

Pinckney's strong suit is in coverage where he earned the highest coverage grade among Power-5 linebackers. He allowed just 47 yards on 225 snaps in coverage and just 36 of those after the catch.

The top defensive player returning to college football, Hall excels when covering the intermediate to deep levels of the field. On 44 targeted passes of at least 10 yards downfield, Hall forced 18 incompletions compared to just 14 receptions allowed.

Bandy allowed fewer than 50.0% of the passes thrown his way to be caught, hauling in three interceptions and six more pass breakups in the process.

The Power-5's fifth highest-graded safety, Blount does it all. He has plus grades in run defense, pass-rush and in coverage where he really shined a season ago.

The freshman sensation from 2018, Cisco led active safeties with seven interceptions last year. His 88.8 coverage grade is the seventh-highest among that same group.

Bassey's coverage grade of 84.9 is the seventh-highest among all Power-5 cornerbacks as he allowed just 53.7% of the targets thrown his way to be caught.

Szmyt was a perfect 61-for-61 on extra points a year ago and went 3-for-3 from 50+ yards. No kicker made more field goals from 30 or more yards out than Szmyt did a year ago.

Hofrichter punted 67 times last season for a net average of 39.2 yards while pinning the opponent's inside the 20-yardline on 34 occasions, second-most in the Power-5.