NCAA Week 5 – Team of the Week

Welcome to the fifth NCAA Team of the Week for the 2018 season. As always, our team of over 500 analysts has dissected and graded every snap of every game to bring you the most detailed and valid set of picks you can find anywhere.

Two big-time matchups did not disappoint as Ohio State found a way to beat Penn State and Notre Dame burst out late to cruise by Stanford, the Week 5 Team of the Week saw many impressive performances across the country and as always, playing time and the quality of opposition has been factored in to make these selections. 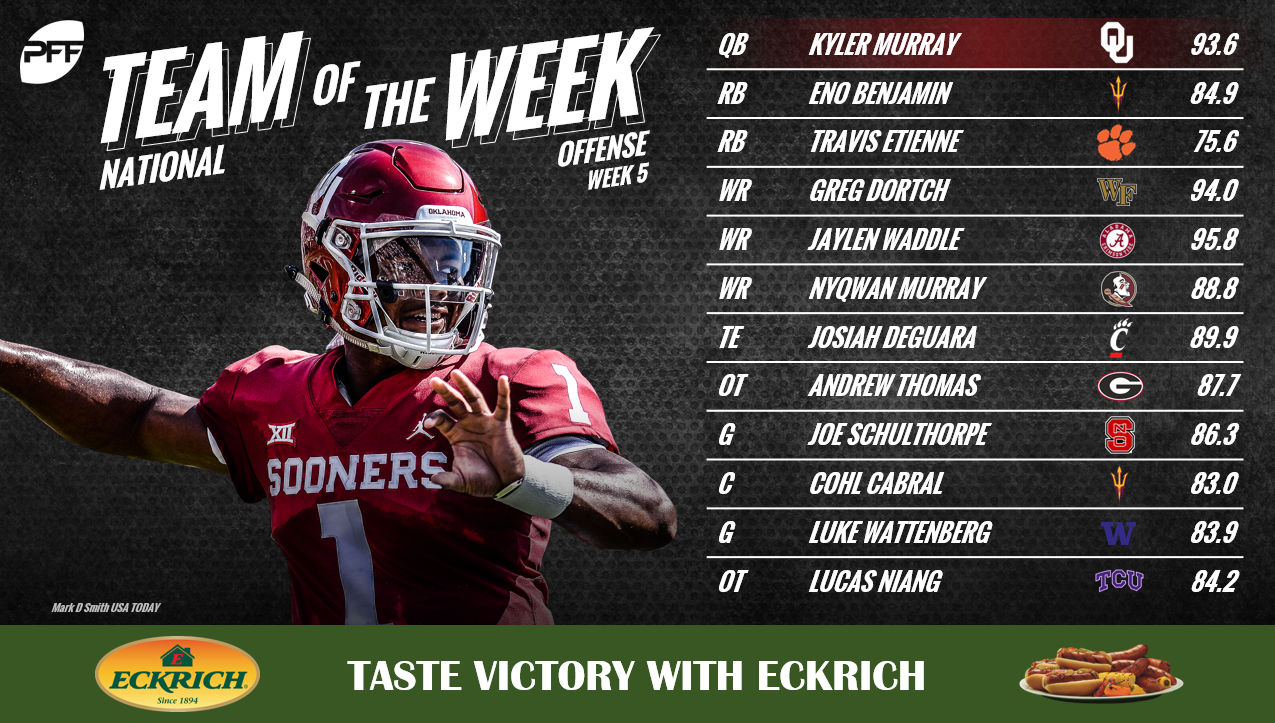 Hardly a tough decision, Murray grabs QB of the Week by tossing six touchdowns on 17-of-21 passing and 432 yards. Two of his incompletions were drops giving him an adjusted completion percentage of 90.5% and boosting his season figure to 78.1%. He lit up the middle of the field to the tune of 324 yards passing and four of his scores while he connected on 5-of-7 passes targeted 10 or more yards downfield. Adding in a rushing touchdown and four more first downs on carries, Murray's all-around performance against Baylor is one for the ages.

Averaging 10 or more yards per carry is one thing, doing so on 30 rushing attempts is a complete other feat in and of itself. Benjamin gashed the Oregon State defense for 311 yards on the ground on 30 carries. He scored three touchdowns and had an additional 11 first downs as 10 of his runs went for at least 10 yards. He forced or avoided 20 missed tackles on carries in this game alone, tying the PFF College single-game record for most missed tackles forced on runs by a running back.

Etienne quite literally carried his team on his back on Saturday, tallying 202 rushing yards on 27 carries. After the Tigers lost starting quarterback Trevor Lawrence to a concussion in the first half, Etienne paced the Clemson offense with his three touchdowns and 10 additional first downs including the game-winning score. He forced eight missed tackles as a runner in the win.

Dortch came up big in Wake Forest's win over Rice, hauling in all 11 of his targeted passes for 163 yards and four touchdowns. He gained 103 of his yards after the catch and in total, saw a perfect passer rating of 158.3 when targeted.

Making the team off both his receiving prowess and his return-game highlights, Waddle totaled three touchdowns in the blowout win over Louisiana. Through the air alone, Waddle hauled in all three of his targets for 138 yards as all three of his receptions went for either a touchdown or a first down.

Murray closed the door on Louisville with his 58-yard, game-winning touchdown reception on Saturday evening, catching a pass over the middle and housing it after breaking a tackle and outrunning the Cardinals defense. Murray brought in 6-of-7 targets from Deondre Francois for 114 yards and two scores on the day.

Deguara was one of just two tight ends across the country to eclipse the 100-yard receiving mark, doing so on just five receptions. He hauled in one touchdown and three additional first downs on his catches as Deguara also impressed with his run-blocking.

Thomas paved the way for the Georgia rushing attack against Tennessee as he was no slouch in pass protection either. He allowed just one QB pressure on 29 pass-blocking snaps while Bulldogs runners averaged over 7.0 yards per carry on 12 runs to the left side of the offense line following Thomas.

Splitting time at both right and left guard, Schulthorpe didn't allow a single pressure on 24 snaps in pass protection. He also helped pave the way for the NC State rushing attack that gained nearly five yards per carry against Virginia.

Not much more needs to be said for Cabral and the Sun Devils' rushing attack in this one. On runs to either side of Cabral, Arizona State running backs totaled 148 yards on just 12 carries, averaging 12.3 yards per attempt and scoring two touchdowns.

Niang also joins the Team of the Week based on a strong performance in both pass protection and run-blocking. He didn't allow a single pressure on 31 pass-blocking snaps while TCU running backs gained four first downs and saw their only two runs of 10 yards or more on carries to Niang's right side. 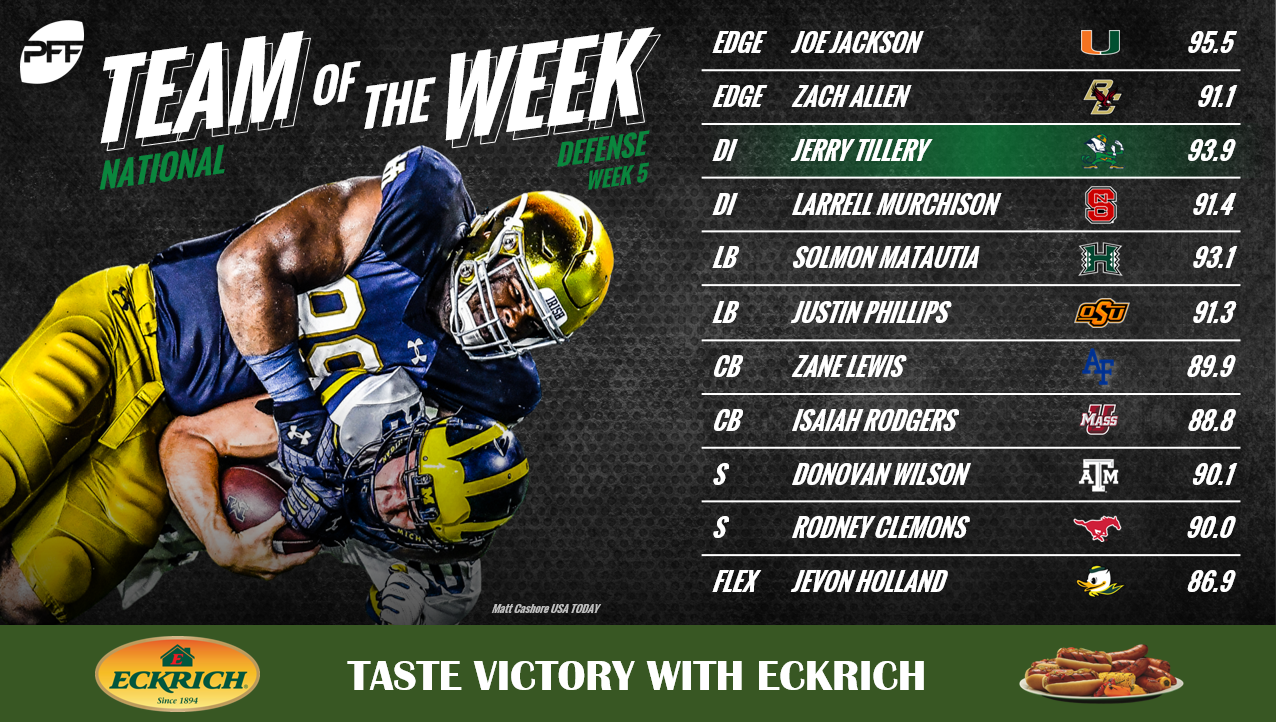 Here to make sure no one forgets about the strong performance from the Miami defense on Thursday night, Jackson earns Team of the Week honors for his strong overall performance. He racked up four QB pressures including a sack and three hurries but his splash plays are what truly made the difference. He forced a fumble and also grabbed an interception when UNC QB Chazz Surratt was trying to throw the ball away, returning it 42 yards for a touchdown that pushed the Miami lead to 24-10 as they never looked back.

Allen dominated the Temple offensive line, registering 12 QB pressures to lead the nation in Week 5. He brought in two sacks, four QB hits and an additional six hurries while he also recorded five defensive stops in the game.

Tillery was unstoppable for the Fighting Irish on Saturday night. He racked up a forced fumble and had a whopping four sacks on Stanford QB K.J. Costello. Tillery also recorded 2 QB hits and one more hurry to give him seven total pressures from the defensive interior.

Capping off what could essentially be called the ACC defensive line of the week, Murchison recorded eight total QB pressures against Virginia, on just 24 pass-rushes from the inside. He brought in three sacks, two QB hits and another three hurries as he proved unblockable all afternoon.

Matautia flew all around the field for Hawaii as they gained their fifth win of the season in a five-overtime thriller against San Jose State. Matautia racked up 10 solo tackles, limited receivers to just 11 yards on his three targets in primary coverage, had four pressures on seven pass-rushes and forced two more fumbles. Add in the fact that he did all of this without missing a tackle and that's about as solid of a performance as you'll see from a linebacker.

Taking on the nation's second-highest graded running back in true freshman standout Pooka Williams was going to be a tall ask for the Cowboys defense, but one that Phillips and Co. seemed up to answering. Phillips registered 11 solo tackles and brought in seven defensive stops as Oklahoma State limited the Kansas rushing attack all afternoon long, save for one long carry.

Lewis spent 35 snaps in coverage against Nevada and brought in as many catches of his own as he allowed to receivers. He was targeted four times, allowing just one catch for 13 yards while he nabbed an interception and also another pass breakup, all good for a 1.0 passer rating when targeted.

Rodgers was stingy in coverage, seeing nine targets against Ohio. He saw an average of just 4.4 yards per reception he allowed as he limited receivers to just 22 yards on five catches. He brought in an interception and a pass breakup of his own as Nathan Rourke saw just a 21.3 passer rating into Rodgers' coverage.

In a stifling performance against Arkansas, Wilson led the charge from the secondary for Texas A&M. All over the field, Wilson brought down an interception as he allowed just 0.19 yards per snap he spent in coverage.

Albeit against FCS opponent Houston Baptist, Clemons was dominant on the backend in coverage for the Mustangs. As the primary coverage defender, Clemons was targeted five times allowing just two receptions for 16 yards. He recorded two pass breakups and an interception of his own as his 9.2 passer rating when targeted was among the lowest of the day for safeties.

Holland makes the Team of the Week via his play in coverage. On 30 snaps in coverage, the safety recorded two interceptions and a pass breakup, showcasing his impressive play all over the field for the Ducks.