The 2019 season begins this weekend and with that, the full set of 2018 data officially becomes history. We look ahead towards the top-graded players returning in each conference, keeping things going with the Big 12. 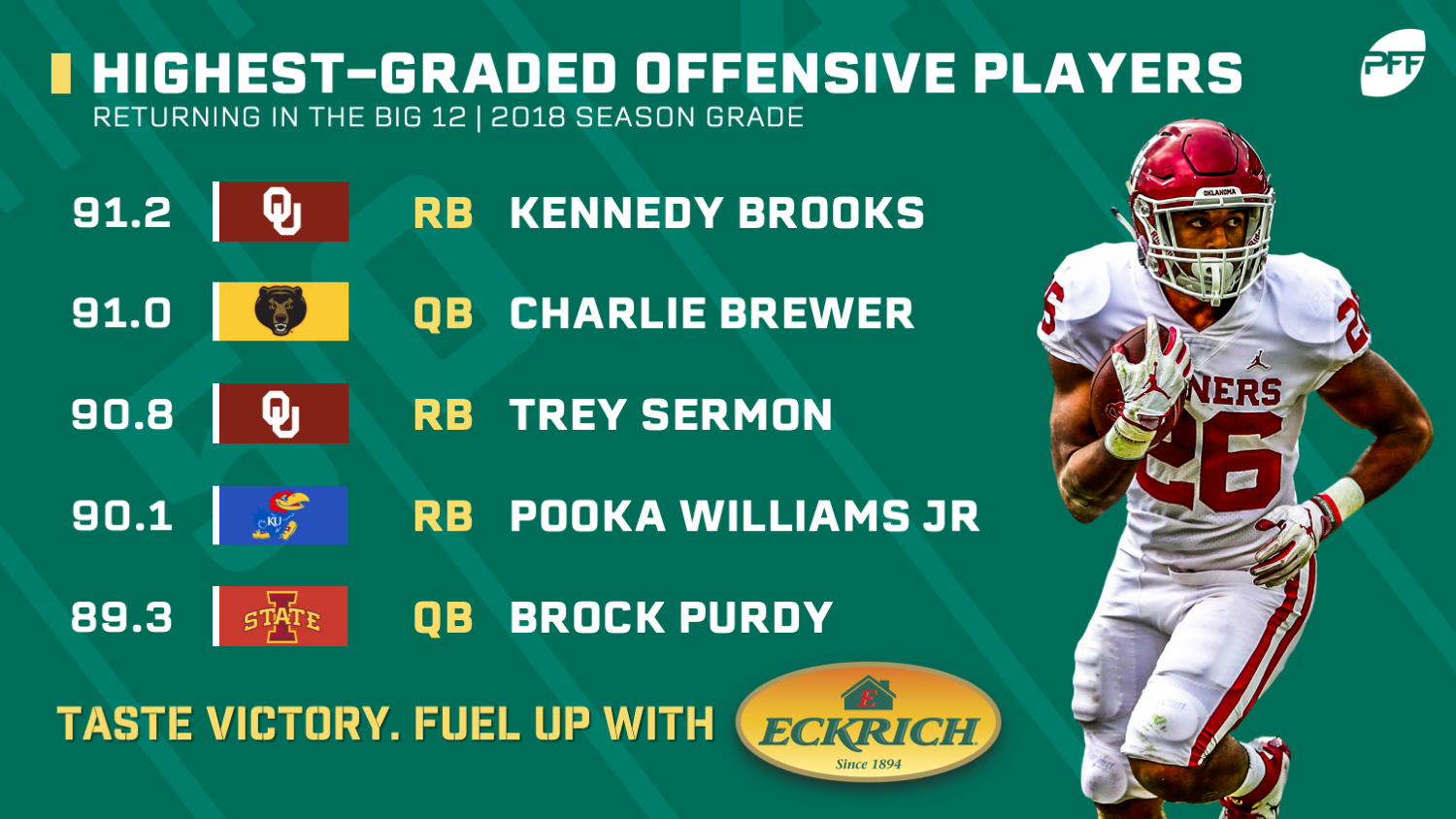 Brewer had the fewest amount of negatively-graded plays by dropback percentage a year ago while Purdy emerged as the second highest-graded true freshman quarterback in PFF College history and Ehlinger is continually setting the record for highest-graded Texas quarterback in our grading history.

Brooks and Sermon are the nation's best 1-2 punch at running back as they combined for 2,000 yards and a ridiculous 1,191 yards after contact. They broke 94 tackles on their carries and have elite overall and rushing grades returning this year.

Lamb is perhaps the best all-around receiver in the country while Wallace dominated the nation with his contested-catch skills last year. Johnson is a huge target with safe hands while Reagor is arguably the nation's best deep threat. This a front-loaded receiver class returning to the Big 12.

Calcaterra is in consideration for best tight end in the country after hauling in 26 receptions for 396 yards and six scores last season. Of his 26 catches, 19 of them converted a first down or touchdown and he recorded 99 of his yards after the catch.

The Big 12 tackles are a star-studded group including Niang who should hear his name called early in April with another solid season. Cosmi played more snaps than any returning Power-5 tackle and did so with terrific results.

Sills holds the conference's top run-blocking grade among returning guards while Anderson's pass-blocking grade is the top mark. He allowed just 11 total pressures on a whopping 617 reps in pass protection.

Humphrey is the class of centers in the Big 12 and among the nation's best as he allowed a combined 10 total pressures on 460 snaps and dominating in the run game. 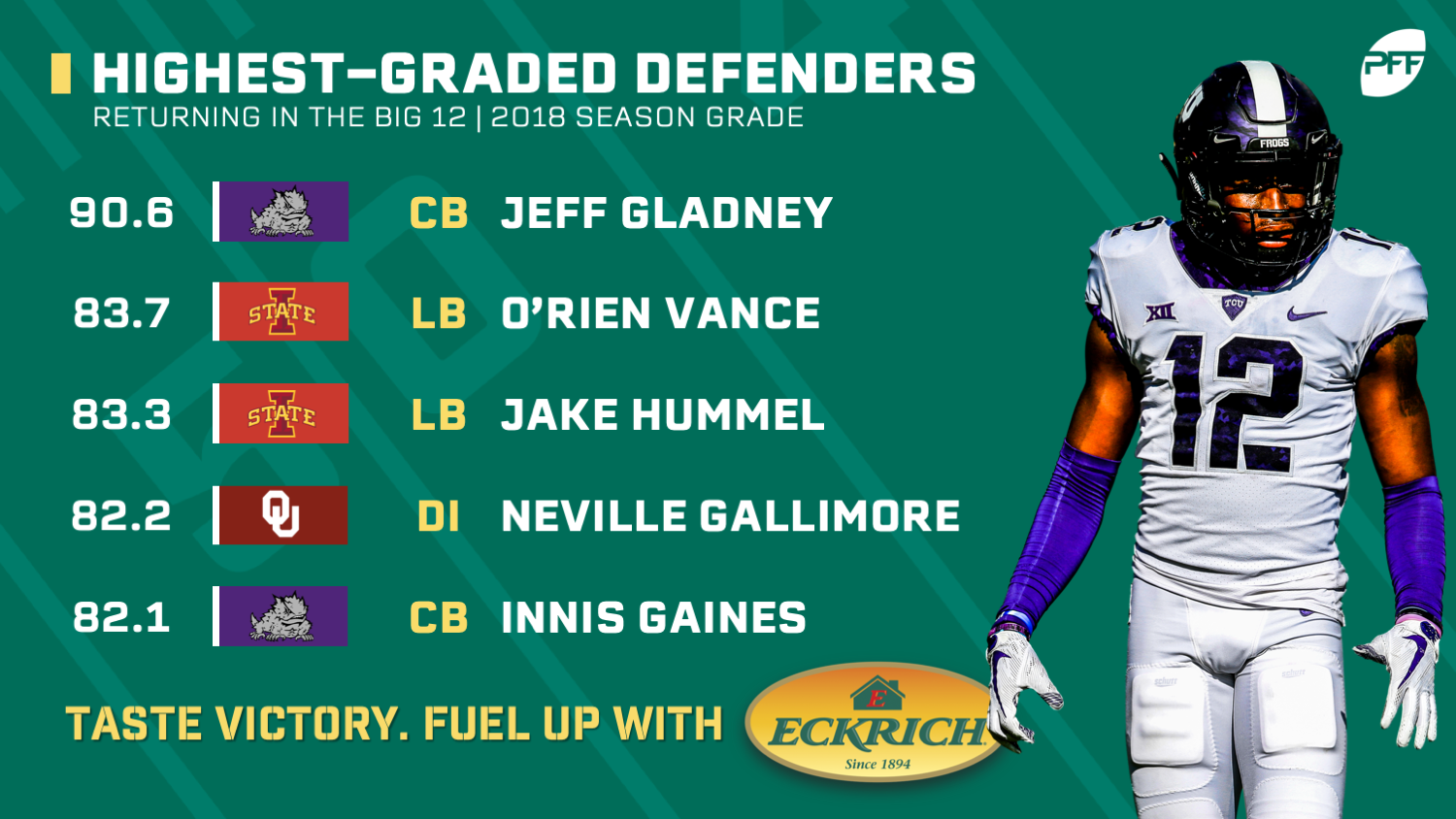 Stills recorded only 12 pressures and played limited snaps last year but did so with great success. Bailey is the returning leader in total QB pressures at 33 while Lynch's 10 QB hits are the second-most in the conference.

The Cyclones hold incredible depth at linebacker with Rose leading the charge. He leads all Big 12 linebackers with his 22 QB pressures last year while Vance and Hummel each recorded multiple sacks on just a combined 49 blitzes.

Gladney and Gaines are a top-notch combination at cornerback for the Horned Frogs as Gladney recorded 16 combined plays on the ball. Gaines played just 177 snaps in coverage last season but didn't allow a touchdown and didn't allow a reception longer than 13 yards.

Torneden more than held his own last year as a true missile around the ball. He recorded more defensive stops, more quarterback pressures and more solo tackles than anyone on this list of top safeties, including first-place finishes in pressures and solo tackles among all returning conference safeties.