Welcome to the 12th NCAA Team of the Week for the 2018 season. As always, our team of over 500 analysts has dissected and graded every snap of every game to bring you the most detailed and valid set of picks you can find anywhere.

The Week 12 Team of the Week saw many impressive performances across the country and as always, overall grades, playing time and the quality of opposition (this week especially) has been factored in to make these selections. 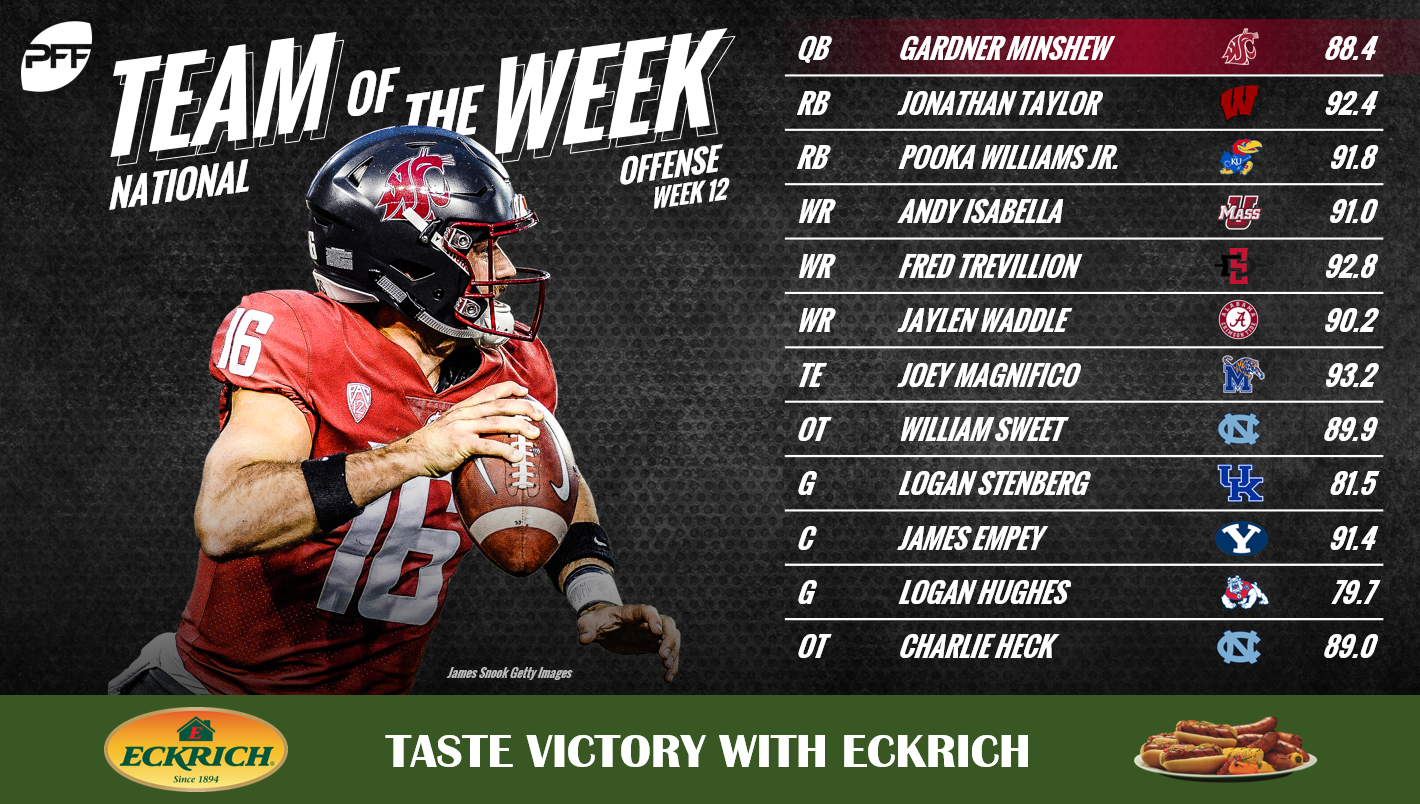 Minshew doesn't possess the highest overall grade among quarterbacks this weekend but he does possess the highest grade against a Power-5 team who is still fighting for bowl eligibility. Oh, he also led the nation in yards (473), completions (43) and touchdowns (7) while still averaging 8.6 yards per attempt against Arizona. In what is the highest-graded game of his career, Minshew was lights out from a clean pocket, tossing all 7 of his touchdowns and 409 yards on 46 dropbacks free from pressure.

Overall, of his 12 incompletions on the night (43-of-55), three passes were dropped and an additional three were thrown away giving him an adjusted completion percentage of 88.5%.

Taylor ran away with RB of the Week honors this week, quite literally. With 321 yards on the ground, Taylor led all FBS running backs in yards, combined first downs and touchdowns (11) and missed tackles forced (13).

Dueling with Oklahoma QB Kyler Murray, Williams Jr. was a force to be reckoned with on Saturday night. On just 15 carries, he totaled 252 yards on the ground including nine carries of at least 10 yards. He gained a whopping 165 yards after contact, averaging 11.0 yards after contact per attempt.

Our top-graded receiver to date continued his impressive season for the Minutemen, hauling in 15-of-16 targets against Georgia's vaunted secondary. Despite the final result of the contest, Isabella finished with 219 yards and two touchdowns, gaining 64 yards after the catch and posting a perfect 158.3 passer rating when targeted.

Perhaps even more impressive than his overall stat line is the fact that Isabella hauled in both targeted passes with Georgia CB Deandre Baker in coverage. He also caught his one target against heralded five-star recruit Tyson Campbell in coverage as well.

Even a drop couldn't outdo what Trevillion accomplished against Fresno State in a losing effort. Comprising of the majority of the Aztecs' offensive output against the Bulldogs, Trevillion hauled in 189 of the team's 218 total receiving yards on just 4 receptions. He gained 87 yards after the catch and forced three missed tackles, averaging 47.3 yards per reception and 21.8 yards after the catch.

Waddle's toe-tapping touchdown in the corner of the end zone highlighted his day against The Citadel as QB Tua Tagovailoa and the Crimson Tide started slowly but rallied to cruise past their ‘cupcake opponent' ahead of the Auburn game next week. Waddle finished the day with six receptions for 90 yards and two scores, forcing three missed tackles in the process.

Magnifico was great in all facets for the Tigers, hauling in five receptions for 43 yards and two scores while also possessing a top-20 pass-blocking grade among tight ends this weekend. With two more first-down receptions to his name, all but one reception on the season for Magnifico have resulted in either a touchdown or a first down.

A Tar Heel sweep at the tackle position on the National Team of the Week has finally occurred as both Sweet and the latter-mentioned Charlie Heck each has taken their turns on this weekly list in 2018. Against Western Carolina, Sweet and Heck dominated as Sweet led the way with both the nation's best 86.6 run-blocking grade and overall grade.

Stenberg spent just 16 snaps in pass protection without allowing a single pressure as he also finished with the nation's highest run-blocking grade at 80.6 among guards in Week 12.

Empey didn't allow a pressure in pass protection and what he in run blocking was nothing short of extraordinary. On his 34 run snaps, Empey's 88.0 run-blocking grade was 13.5 points higher than the next closest center this weekend.

A UNC sweet at tackle and a ‘Logan' takeover at guard this week as Hughes finds himself at the other guard spot on our Team of the Week. Spending 30 snaps in pass protection, Hughes didn't allow a single pressure and also finished with the nation's second-highest run-blocking grade (78.6).

Heck and Sweet were dominant as Heck's 85.6 run-blocking grade was second on the weekend to only his teammate. He didn't allow a pressure on 23 snaps in pass protection and was not penalized once. 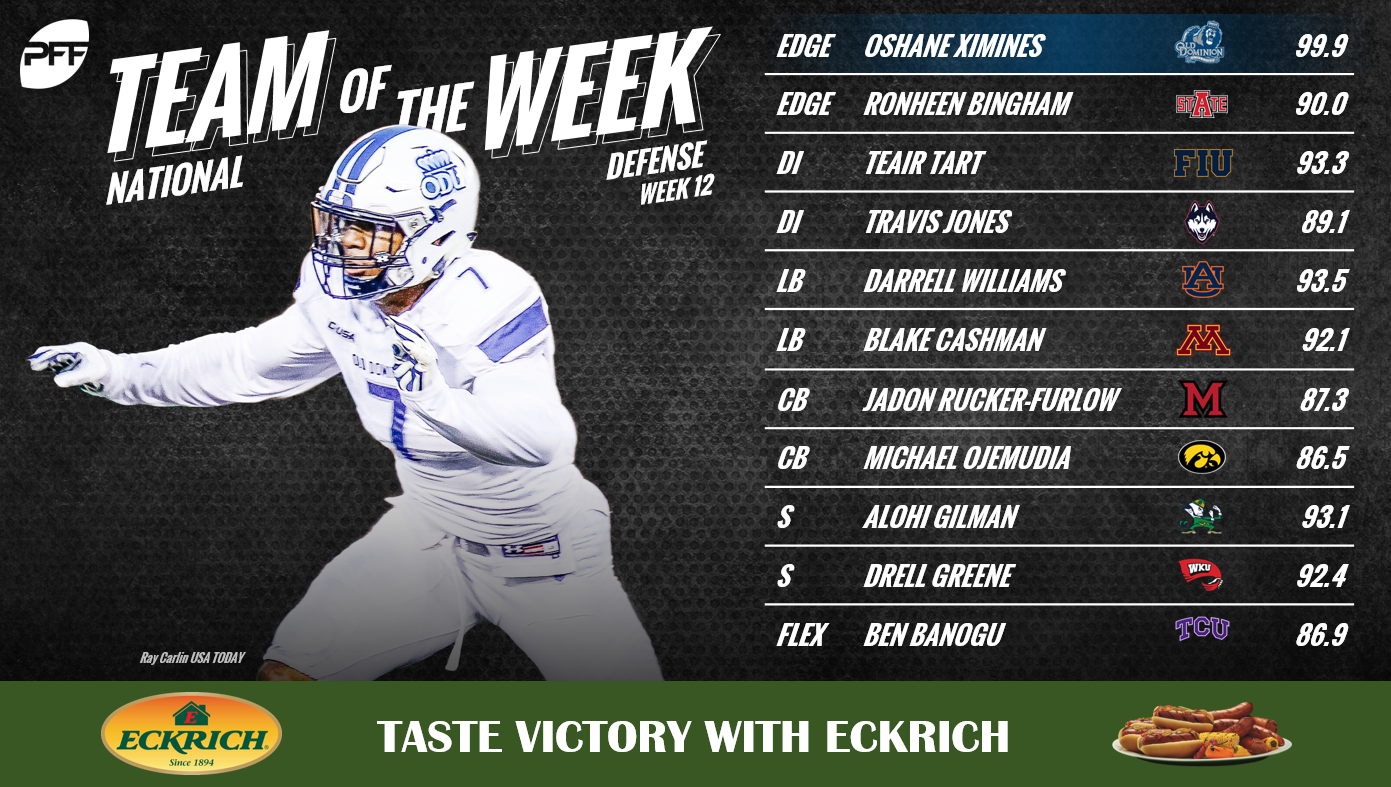 Ximines was unstoppable for the Monarchs on Saturday. While he registered only five total pressures that included two sacks, two QB hits and an additional hurry, he was oft-victim to the ball being thrown too quick to register a pressure. Isolating just Ximines on his blocker, he won 52.9% of his pass-rush snaps for ODU and forced two fumbles to boot.

Bingham makes the National Team of the Week for the second consecutive week as he got home with a pressure on 24.1% of his pass-rushing snaps for the Red Wolves on Saturday. He recorded seven total pressures that included two sacks, two QB hits and three more hurries while also making three additional stops in run defense.

In run defense, Tart recorded two defensive stops and a forced fumble making both of his tackles at the line of scrimmage or in the backfield against Charlotte. He added value as a pass-rusher as well, notching a sack and a hurry on 13 pass-rushing snaps.

Jones recorded eight solo tackles for the Huskies in a losing effort as he led the nation's interior defensive linemen with three tackles for either a loss or no gain against the run.

Williams was all over the field on his 31 snaps against Liberty, recording a stop on his lone solo tackle and the nation's highest coverage grade among linebackers. On 15 snaps in coverage against the Flames, Williams was targeted once, allowed just two yards and even made an interception on a pass not thrown at him as the primary coverage defender, showing off his movement across the field.

Although the Golden Gophers ultimately lost the game, Cashman had himself quite the afternoon. On just five pass-rushing snaps, he recorded three pressures while also allowing just six yards on his 20 snaps in coverage. Add in his 15 solo tackles by PFF's record, and his 12 defensive stops for an offensive failure, and you have one dominant linebacking performance.

Rucker-Furlow allowed just 22 yards after the catch earlier in the week against Northern Illinois a the Redhawks kept their bowl hopes alive with a win over the Huskies. He was targeted six times but came away with an interception of his own and saw just a 79.2 passer rating into his coverage.

Ojemudia locked down receivers in his coverage on Saturday, seeing 10 targeted passes come his way against Illinois. He allowed just two catches for a mere 23 yards (only 1 after the catch) and intercepted one of his own. With three more pass breakups to his name, Ojemudia managed a 0.0 passer rating on targets against the Illini.

The Fighting Irish cruised past Syracuse, keeping their 12-0 hopes and College Football Playoff aspirations intact with a dominant performance at Yankee Stadium. Gilman was targeted three times in coverage, allowing just one reception for no yards and coming away with two interceptions himself. His 92.7 coverage grade was the tops among all FBS defensive backs this weekend.

The season hasn't quite gone as expected for the Hilltoppers but their second win of the year can be largely contributed to their stingy defense against UTEP. Greene was a big component of their defensive effort, grabbing an interception and allowing just two receptions on the afternoon.

For the second straight week, our flex spot goes to an edge defender. Banogu just missed out on  Edge Defender of the Week honors by a few grade points but he finished second in total pressures this weekend and added value when dropping back in coverage. On 41 pass-rushing snaps, he totaled nine pressures including a sack and two QB hits while he dropped in coverage just once, allowing a reception for just four yards. His nine pressures matched his season-high and he now has 52 total pressures this season.