Jim Harbaugh’s hiring of Josh Gattis to be Michigan’s sole offensive coordinator has jolted significant enthusiasm into the Wolverines’ football program. Gattis is a 35-year-old rising star in the coaching industry with notable success as a wide receivers coach at Penn State (2013-2017) and co-offensive coordinator at Alabama (2018). Last season, Gattis led Alabama to its best offense of the PFF era (since 2013) with a 95.6 offense grade, ranking second in the nation and trailing only Oklahoma.

Gattis will have full autonomy of Michigan’s offense, and after the Wolverines sputtered offensively in the bright lights of The Game last season, Michigan fans are anxious to discover the team’s new offensive identity under a new play-caller.

But what does Josh Gattis specifically bring to Michigan? Using PFF data, we can analyze Gattis through the lens of his offenses at Penn State and Alabama, and then explore what this means for Michigan in their quest for a Big Ten Championship.

While Gattis arrived at Penn State in 2014, the offense didn’t truly take off until the hiring of Joe Moorhead as offensive coordinator prior to the 2016 season. Together, Moorhead and Gattis helped drive Penn State’s transformation from a methodical pro-style offense into a dynamic spread and West Coast outfit. The below chart demonstrates Penn State’s drastic shift in personnel snap rate from 2014 – 2017 and the corresponding spike in offensive PFF grades:

By the conclusion of the 2017 season, Penn State had become an offensive juggernaut. They thrived on three major elements: 11 personnel (one RB, one TE, three WRs), the run-pass option (RPO) and slot receiver usage.

Nittany Lion pass-catchers who lined up in the slot recorded a cumulative 78.0 receiving grade (fifth in FBS) in 2017. They compiled an incredibly efficient 16 touchdowns (fourth), 45 explosive plays of 15-plus yards (seventh), 72 first downs (12th) and 20 contested catches (second) on a middling 153 slot targets (42nd) and 33% slot target rate (65th).

Under the tutelage of Gattis, a quartet of offensive weapons in Chris Godwin, Mike Gesicki, DaeSean Hamilton and Saquon Barkley all blossomed into superstars and eventual NFL Draft picks.

Godwin’s breakout occurred as a sophomore in 2015, when he recorded a career-best 80.5 overall Grade (eighth among Big Ten wideouts) and racked up 2.56 yards per route run (fifth) while generating a 102.0 passer rating (13th). He even moonlighted in the slot (28% slot snap rate), leading all Big Ten wide receivers with 2.82 slot yards per route run (11th among FBS wide receivers). In 2016, Godwin was the Big Ten’s most efficient receiver and led the conference with a 135.1 passer rating on his targets (11th among FBS WRs).

Operating as a hybrid tight end and jumbo wide receiver, Gesicki thrived as a versatile slot receiving weapon under Gattis and averaged 1.95 slot yards per route run (first among Big Ten tight ends, fifth in FBS) during the 2016 season. In 2017, Gesicki increased his slot rate from 39% to 45% and averaged 1.31 slot yards per route run (third among Big Ten tight ends) while racking up four slot touchdowns (first in Big Ten, third in FBS) and a ridiculous eight slot contested catches (first and second, respectively).

Hamilton emerged in 2017 with a career-best 80.8 grade (fifth among Big Ten wideouts) and was the Big Ten’s most productive slot receiver, leading the conference with 845 slot receiving yards and nine slot touchdowns.

Even Barkley served as a receiving weapon out of the backfield, recording an impressive 86.2  receiving grade (first among Big Ten running backs, third in FBS) during the 2017 season.

Alabama used 178 RPOs (60th in FBS) with a perfectly even split of 89 runs and 89 passes. Their 89.9 offense grade on RPOs was also best in the nation. Alabama was absurdly efficient on these plays, averaging 6.5 rushing yards per attempt (15th) and 10.6 passing yards per attempt (third). Their passing production was also elite: 889 passing yards (fourth), eight passing TDs (fifth), and a 138.4 passer rating (second). 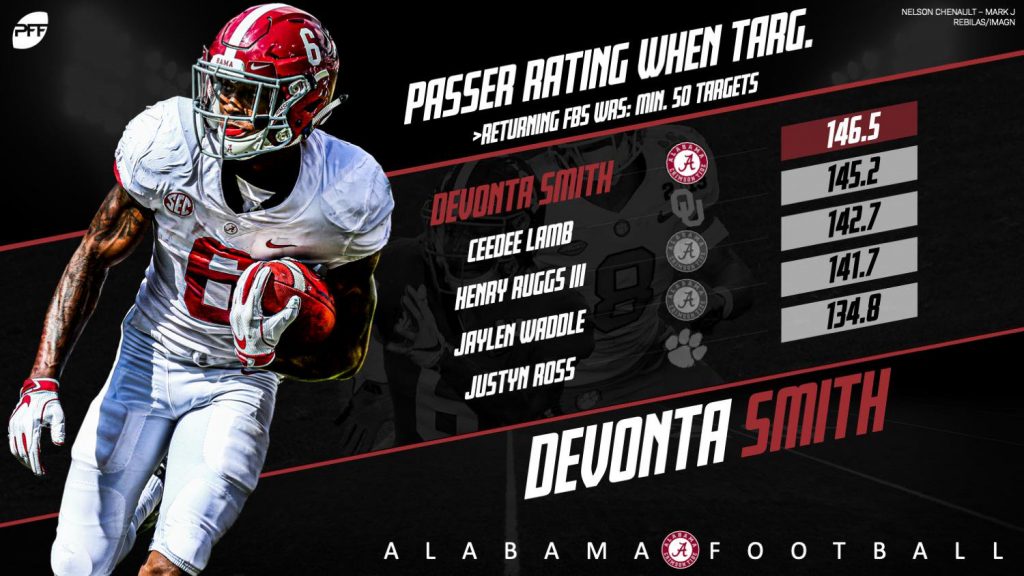 First and foremost, Gattis should inject pace into a Michigan offense that wasn't very fast last season — 24% of Michigan’s offensive snaps came with the play clock at five seconds or less (most in Big Ten, 10th in FBS). As a point of comparison, only 10% of Alabama’s offensive snaps reached the five-second mark last season.

Michigan’s offense is flowing with talented players who are well-equipped to flourish in a modernized offensive scheme. Gattis has preached his “speed in space” mantra all offseason, which will likely translate into more 11 personnel, RPOs and slot usage.

Michigan used 11 personnel on just 35% of snaps last season, the second-lowest rate in the Big Ten (trailing only Iowa) and significantly lower than the 51% FBS average. Michigan’s solid 77.2 offense grade (third in Big Ten, 41st in FBS) in 11 personnel sets suggests they can handle the inevitable Gattis uptick. However, Gattis is unlikely to completely abandon 12 personnel, as it has been integral to the Michigan offense (42% of offensive snaps in 2017) during the Harbaugh tenure.

Last season, Michigan ran just 129 RPOs (89th most in FBS) with 93 runs and 32 passes. Despite a predictable 3:1 run rate, Michigan racked up a sizeable 7.3 rushing yards per attempt (third in FBS). They were even better on those 32 pass attempts, recording a 90.0 offense grade, best in the entire nation. Incumbent starting QB Shea Patterson has a skill set tailor-made for RPOs and recorded a 90.0 passing grade (second among FBS quarterbacks) with a stellar 133.5 passer rating (fifth). If Gattis decides to unleash Patterson, RPOs could become a staple of the Michigan offense.

Michigan targeted slot receivers on just 24% of pass attempts last season, the lowest rate in the Big Ten (11th fewest in FBS). Yet, Michigan deploys several dynamic receiving weapons with the route running chops to interchangeably line up both inside and outside, allowing Gattis to capitalize on mismatches.

Donovan Peoples-Jones, a 6-foot-2, 208-pound junior oozing with athleticism, was Michigan’s top receiver last season (78.2 overall grade, sixth among Big Ten WRs) and averaged 2.07 yards per route run (10th) while generating a 126.6 passer rating (fifth). Peoples-Jones has the most slot experience of Michigan’s veteran pass-catchers — 42% of his snaps last season were in the slot, where he averaged 2.23 slot yards per route run (seventh among Big Ten WRs). 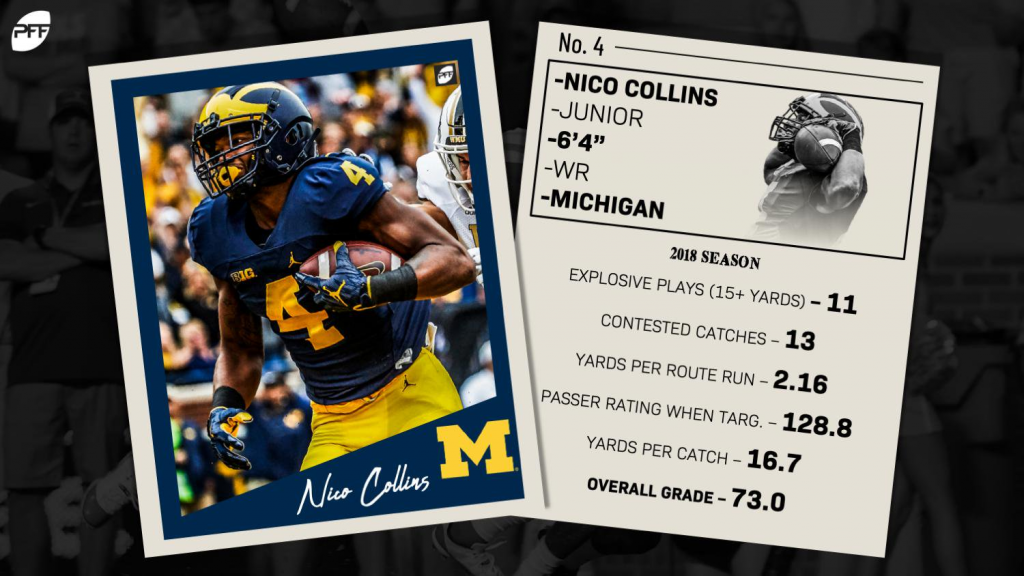 Nico Collins, a 6-foot-4, 218-pound junior, is a jump-ball extraordinaire and will be Michigan’s top deep threat. On deep balls 20-plus yards downfield, Collins hauled in six contested catches (tops among Big Ten WRs, 10th in FBS) and caught 59% of his targets (second, and 17th). Collins’ average depth of target of 15.9 yards last season was tops among all Big Ten wideouts and he was one of only five wide receivers in the entire nation to have at least 50 targets without dropping a single pass.

Michigan will rotate in at least three other wide receivers, all possessing different skill sets. Tarik Black, a 6-foot-3, 215-pound junior, has immense upside — he averaged 2.48 yards per route run in 2017 — but has struggled to stay healthy. Ronnie Bell, a 6-foot, 182-pound sophomore, flashed in limited action as a true freshman last season and caught eight of nine targets to generate a perfect 158.3 passer rating. Jake McCurry, a 6-foot, 185-pound junior, ran 91% of his routes from the slot and was productive with 3.30 slot yards per route run.

As the preseason Big Ten favorite, Michigan returns more than 20 starters and key rotational pieces to a team hungry for that next step. The biggest question for the Wolverines is how Josh Gattis will handle the spotlight in Ann Arbor. Judging by Gattis’ achievements at Penn State and Alabama, the Michigan offense is in more than capable hands.

With Gattis in charge of the offense, perhaps 2019 will finally be the year that Jim Harbaugh wins a Big Ten Championship at Michigan.