There are few things that rival how unique each college football program is from the others. Whether it’s gameday traditions, mascots, off-field stories or anything else, the sport is great because of the wide net that gets cast over it.

This is true for the gameplay as well, especially when it comes to passing the ball. The variety in schemes — between the triple option, spread offense, air raid and many others— enables teams to put their own flavors on offense.

Because of all the factors that go into the passing game, completion percentage isn't a good statistic to use to compare quarterbacks. Each pass should be given an expected completion percentage based on the pass depth, how open the receiver is, the pass width and whether or not the quarterback was pressured in addition to game situation variables such as down, distance, yard line, time remaining, etc. That’s where completion percentage over expected (CPOE) comes into play. Using the factors previously stated, it provides the percentage chance that a pass is completed by an average college quarterback. If the actual quarterback completes the pass, they get a positive CPOE, and if not, they get a negative CPOE. This can be used to evaluate and compare passing levels across the college football landscape.

Now, there are certain flaws to CPOE that should be mentioned. The main one is that it only evaluates plays where passes actually occur, so it doesn't include the quarterback's rushing ability nor consider sacks in the equation either. The other flaw is that it truly doesn’t grasp an interception's impact because it’s just counted as a regular incompletion with a negative CPOE. However, despite all of this, college-to-NFL projections are notoriously difficult, but CPOE does remian relatively stable: 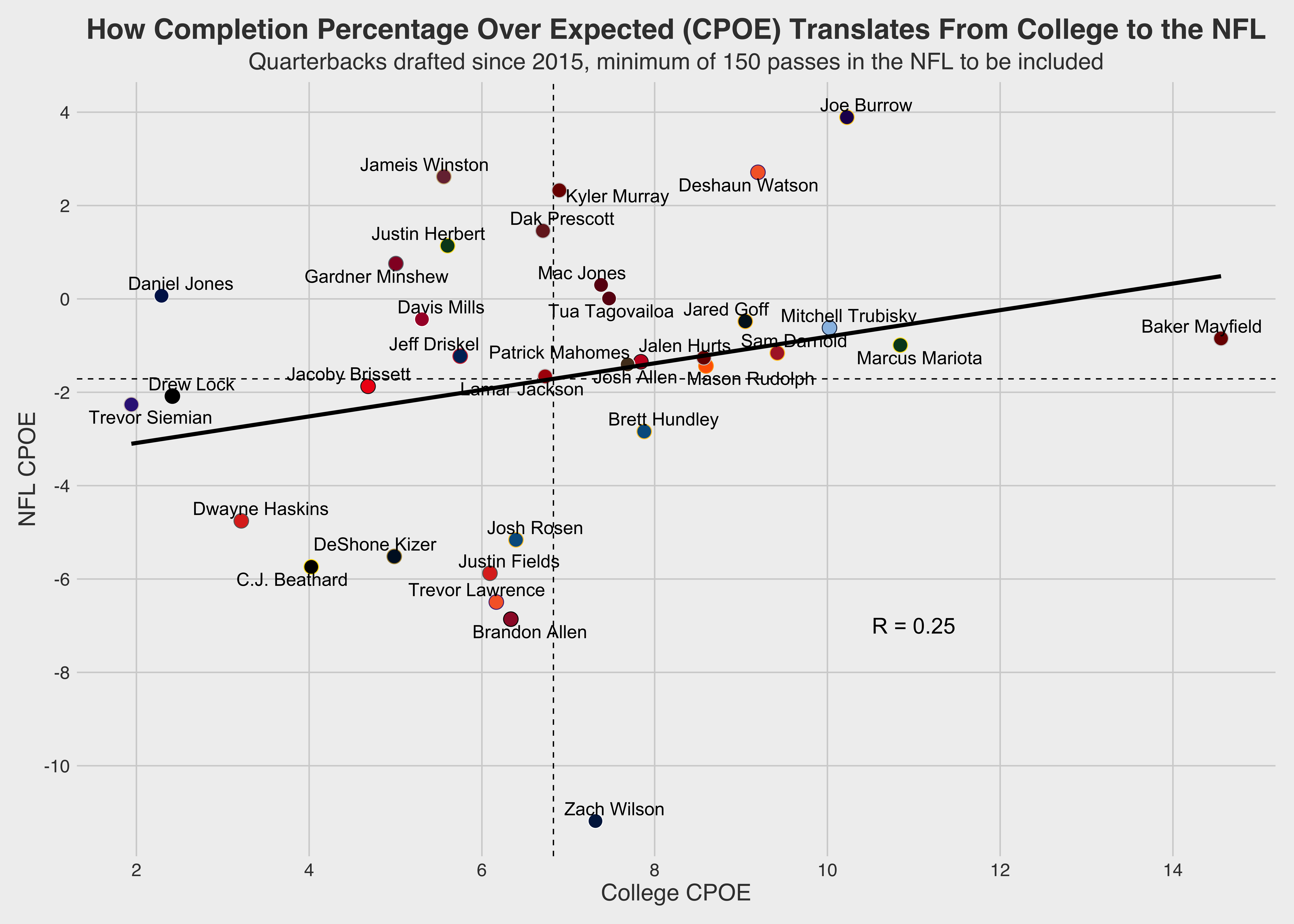 We can see that a lot of quarterbacks that had an above-average CPOE in college continued to boast above-average CPOE in the NFL, and the same can be regarding the quarterbacks who recorded below-average marks as well. This shows that CPOE is a viable metric to look at when trying to project from college football to the NFL, making it useful during the draft process. There will always be outliers, but it gives us a general idea of how capable each quarterback prospect is as a passer. In fact, the New York Jets showed they have their own version of a CPOE model when selecting Zach Wilson last year. ​​

A lot of the talk surrounding this year’s quarterback class has been focused on the top-five quarterback prospects (Malik Willis, Kenny Pickett, Desmond Ridder, Sam Howell and Matt Corral), and how they aren’t quite as capable as previous quarterback draft classes. This is backed up by each draft class’ CPOE in their last season in college before entering the NFL draft (their final season was chosen as the parameter given how much quarterbacks change over their collegiate career, putting most of the focus during the draft cycle on their most recent play): 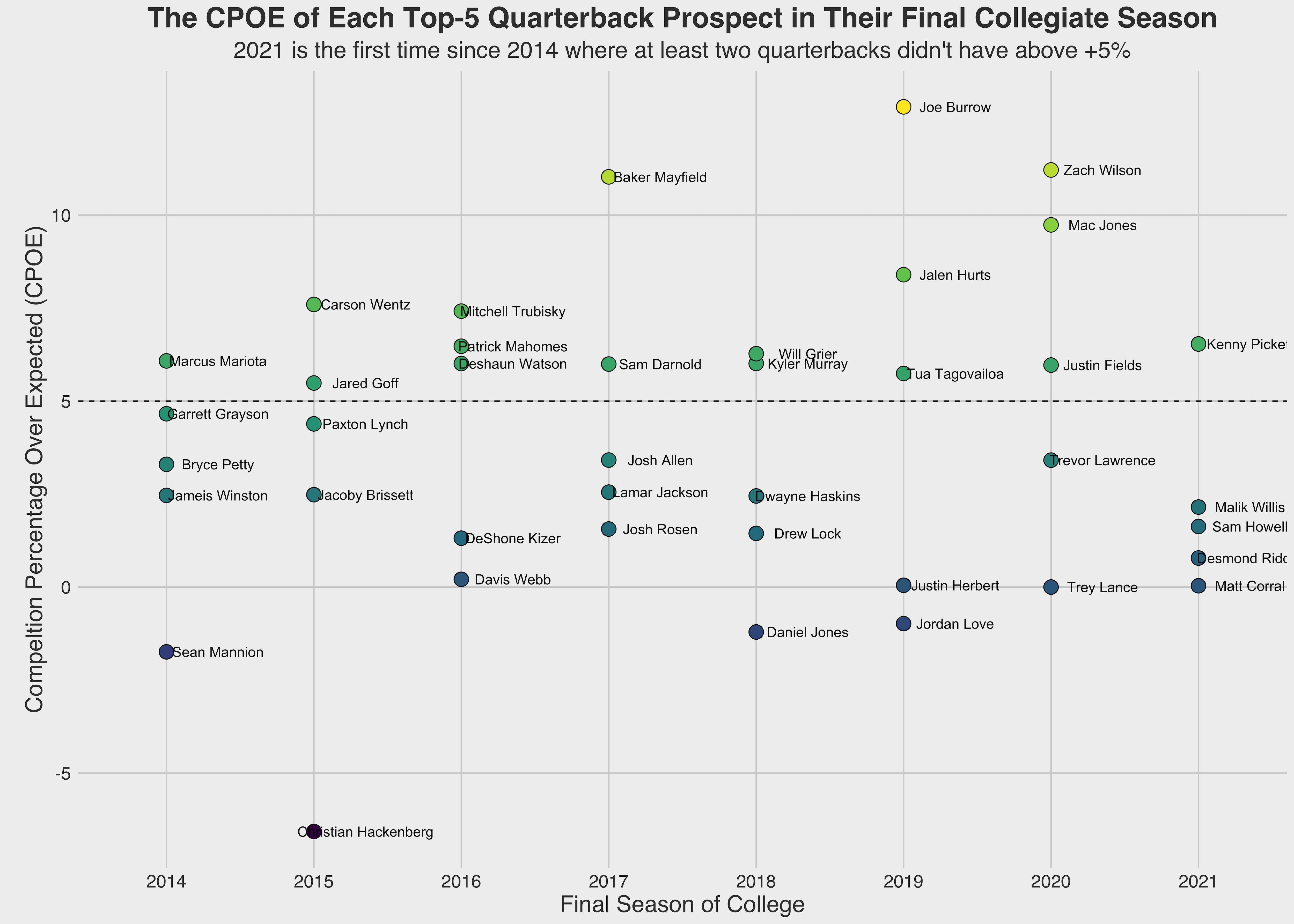 If a quarterback is 5% better at completing passes over what is expected given the situation, it's usually considered an elite season. Every draft class since 2015 has had multiple quarterbacks accomplish that feat outside this year. When taking the mean CPOE of the top-five quarterback prospects in each draft class, we can see that 2021 is the lowest year on average since PFF started charting college football in 2014.

Pickett is the only quarterback prospect in this year’s draft cycle who recorded above a +5% CPOE in the 2021 season, but it is worrisome that he was a one-year wonder. PFF’s own Timo Riske and Steve Palazzolo found that one-year wonders were slightly overdrafted in addition to having lower upside plus a higher bust potential. 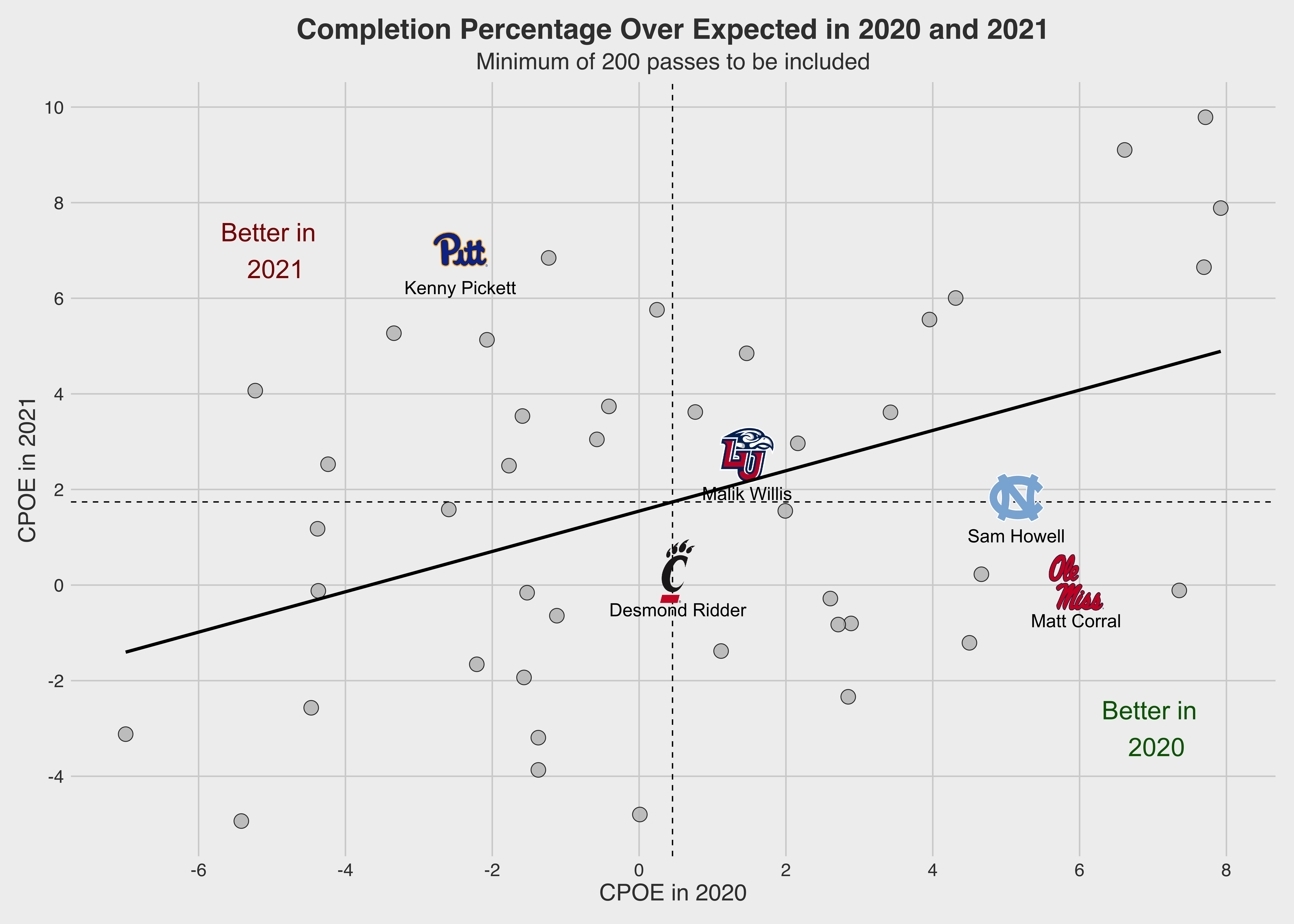 It should also be worrisome that only one quarterback prospect in this year's class improved during their final season of college play. Corral and Howell were standouts in 2020 but posted down years in 2021 while Ridder and Willis remained around average in regards to CPOE in both years. Taking a closer look at expected points added (EPA) per pass along with CPOE gives us a good look at which quarterbacks helped their offense and which offenses helped their quarterback. 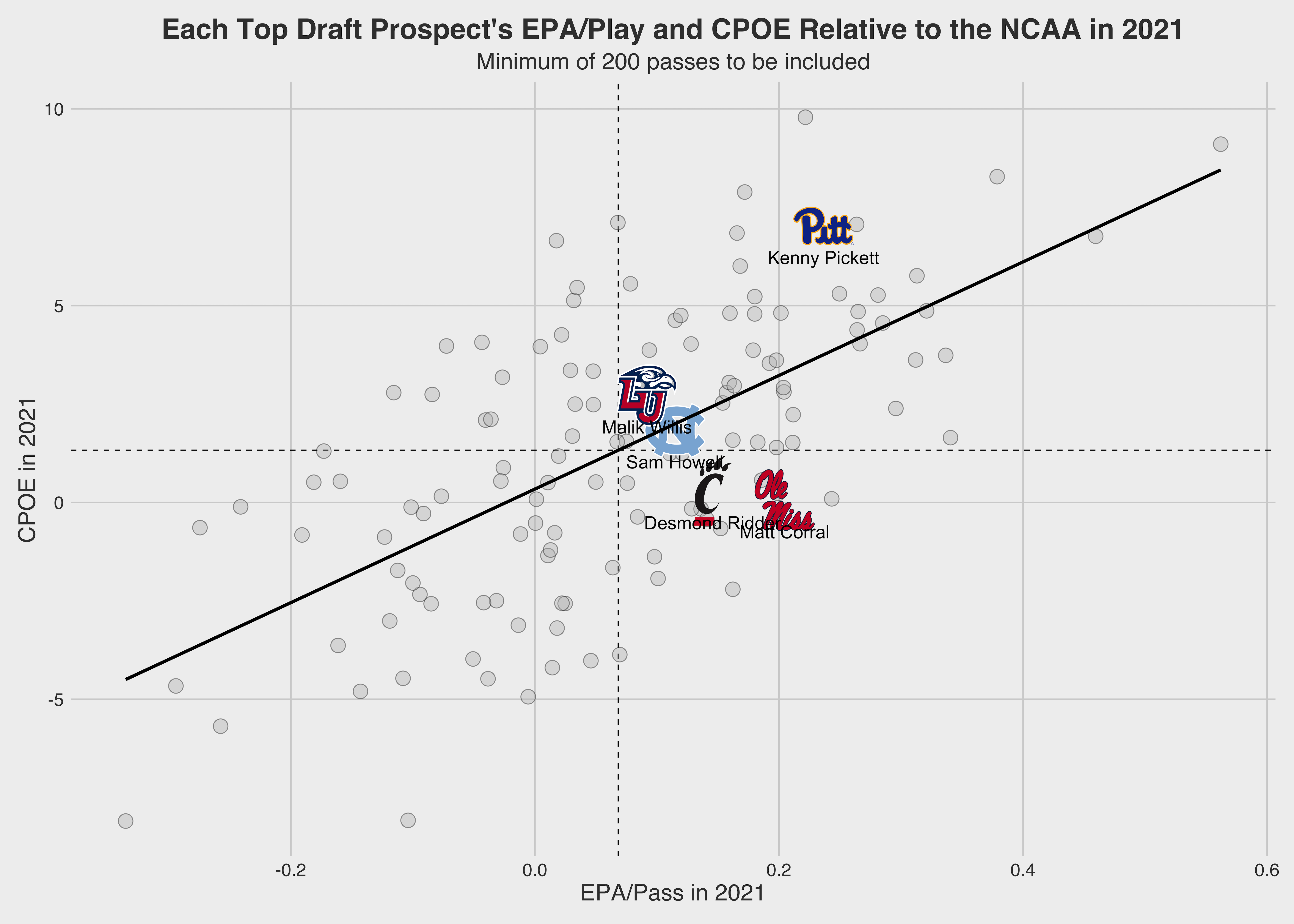 Compared to the rest of the NCAA quarterbacks who threw at least 200 passes, Pickett had a standout season in 2021, which was reflected by his third-place finish in Heisman voting. However, Willis, Howell, Ridder and Corral all ranked around average in both an established efficiency statistic, such as EPA, and an accuracy statistic, such as CPOE. In addition, Corral was especially helped out by his offensive scheme last season, as he completed about the same number of passes as an average college quarterback is expected to complete. In fact, he recorded the highest expected completion percentage among the five quarterback prospects last season:

The fact that Willis has the second-highest CPOE in this draft class yet is still considered a “raw” draft prospect, whose high ceiling is due to his arm talent and rushing upside, might be good news for teams interested in him. 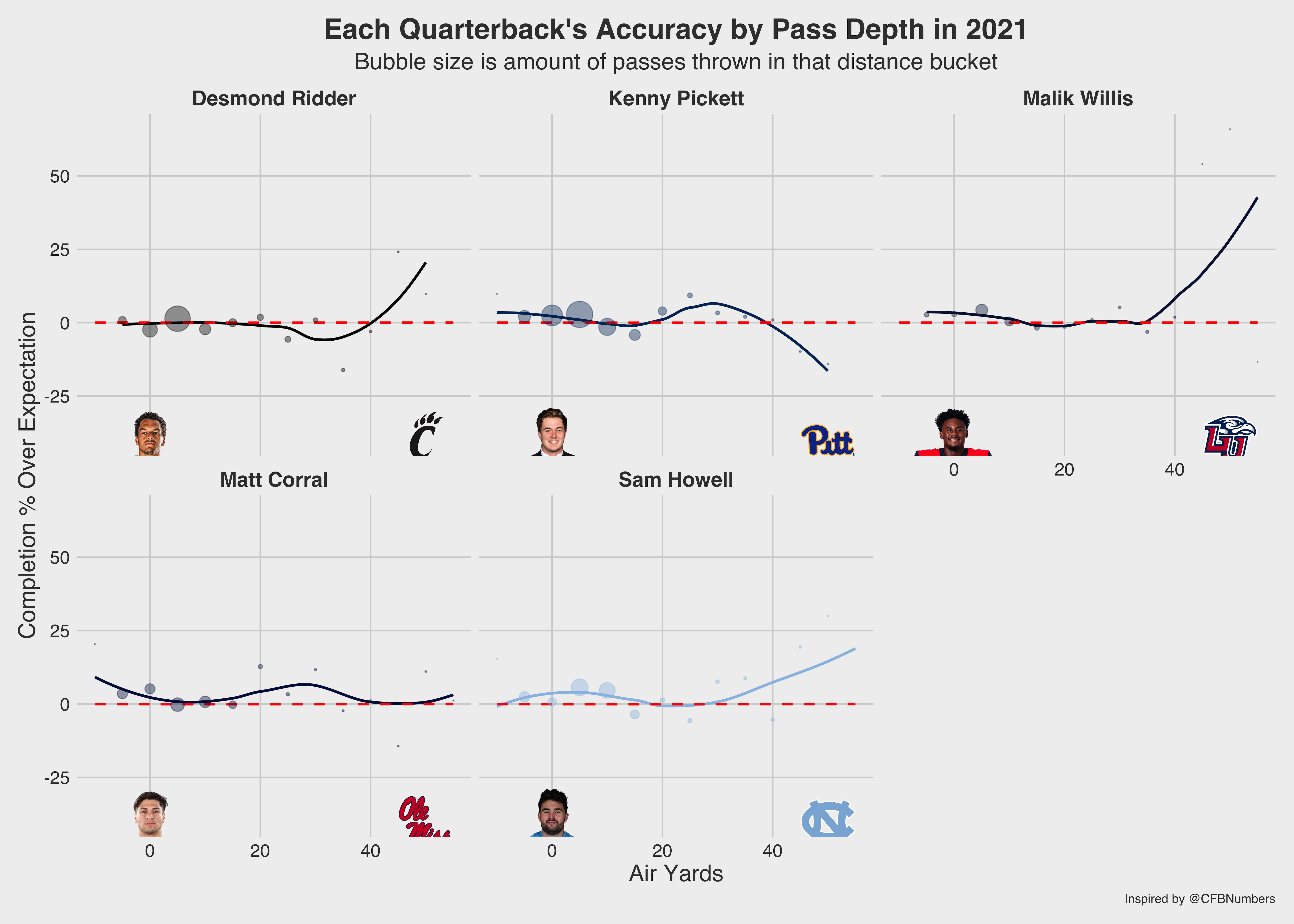 While a small sample size, Willis did show an ability to complete the deep ball at a high level. Ridder and Howell showed similar trends, as they were average on passes below 30 air yards but did a great job of completing the deep ball.  Pickett was great at the intermediate throws last season but did not do well when throwing deep.

each quarterback prospect's most difficult completion of the 2021 season according to completion percentage over expected (every pass than a less than 20% chance of being completed) pic.twitter.com/nJUfJvKoLa

Willis has often been described as the quarterback who has the highest ceiling in the class. In addition, he is the odds-on favorite (-175) to be the first quarterback taken, according to DraftKings Sportsbook. However, he is still inconsistent, and his wide range of outcomes is shown when looking at each quarterback’s CPOE distributions from their whole collegiate career. 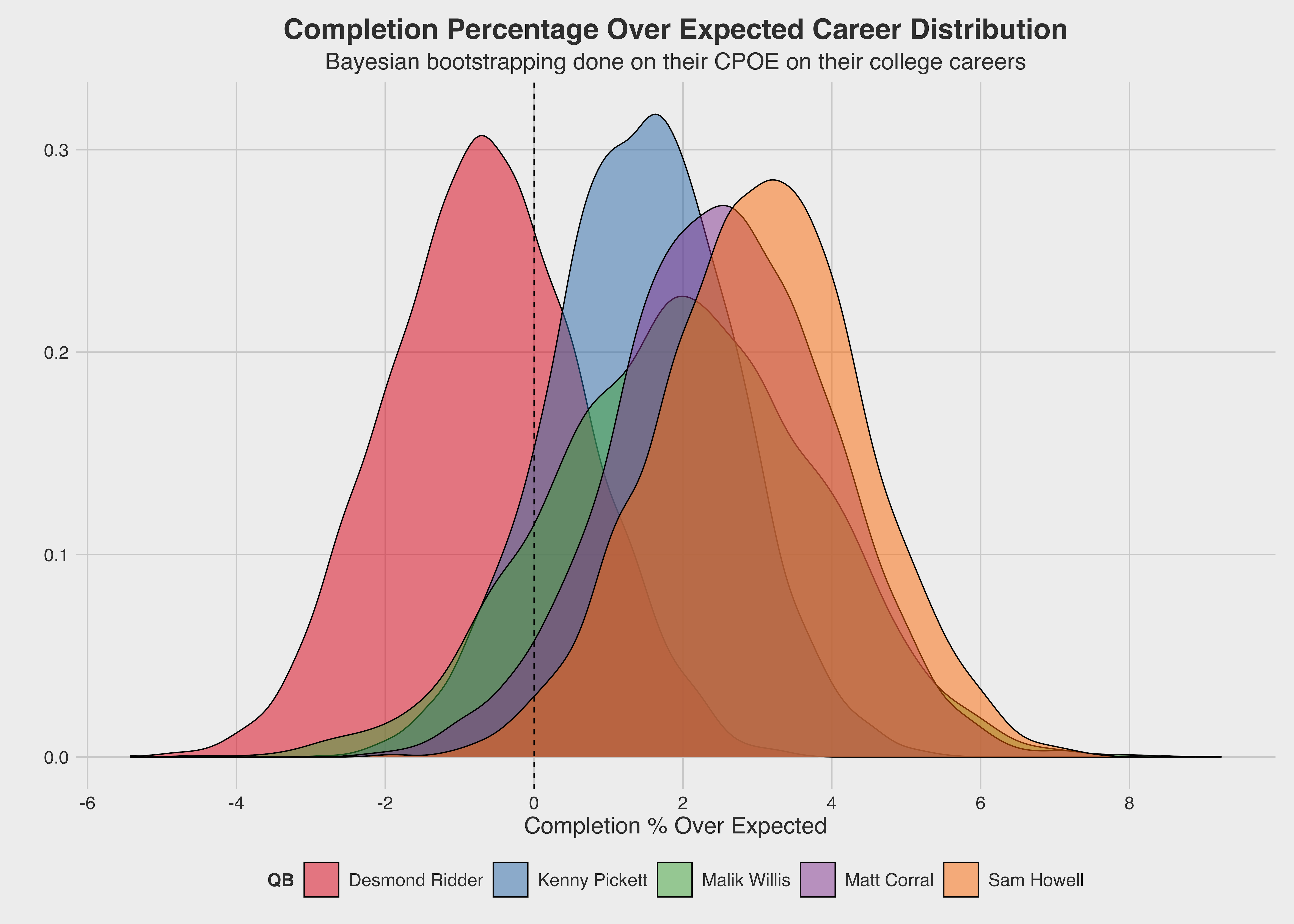 CPOE, along with other metrics such as EPA, show that this quarterback class isn’t up to the typical draft class' standards. The Detroit Lions, Miami Dolphins, Seattle Seahawks, Houston Texans and Philadelphia Eagles all have extra first-round picks in the 2023 draft, so all could have the ammunition it takes to trade up next year for a quarterback without “Sacrificing for Bryce [Young]” or “Losing Proud for [C.J.] Stroud.” Considering that the 2023 prospects already seem to be more capable than this year’s class, those teams should strongly consider not taking a quarterback this year and waiting until the next one. 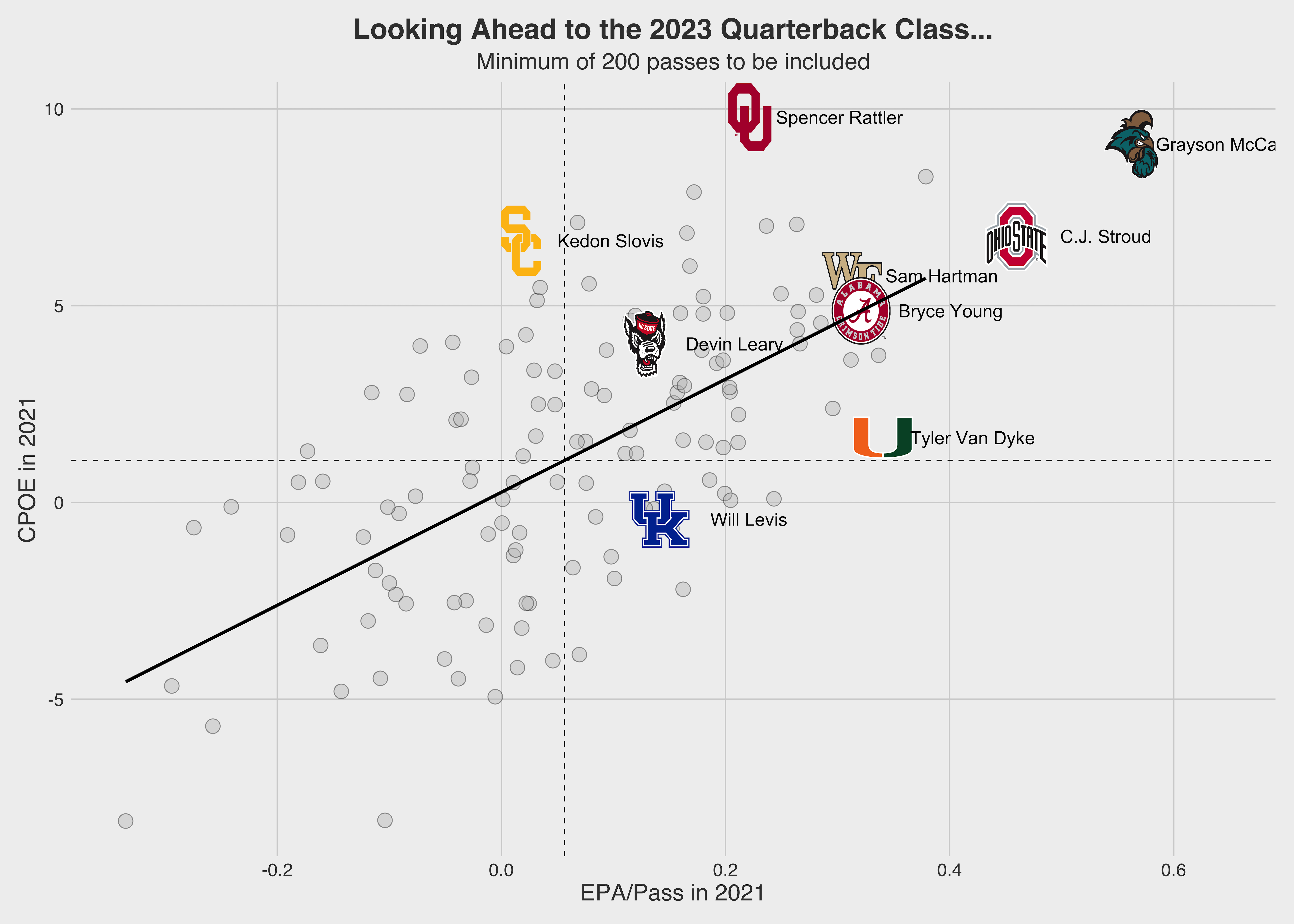