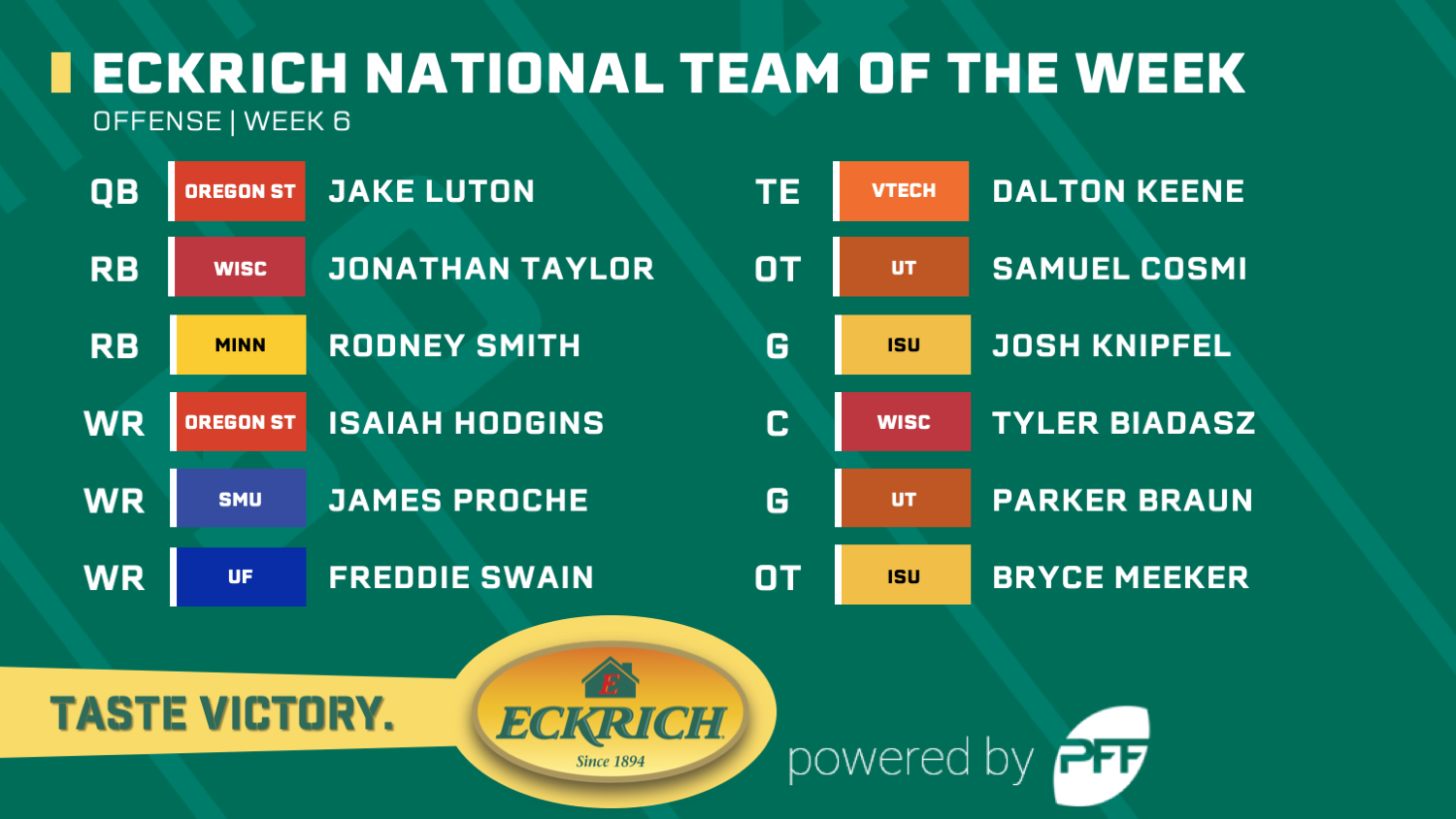 Leading the nation with five touchdown passes (tying Joe Burrow and Ian Book), Luton dominated on seemingly every snap against UCLA, completing 18-of-26 passes for 285 yards while limiting himself to zero turnover-worthy passes. Of his eight incompletions, two of them were drops, two were thrown away intentionally, one batted by a defender at the line, giving him the nation's third-highest adjusted completion percentage (87.0%) on the weekend. A big-time game from a big-time player as the Beavers will be in need of this kind of day from their signal-caller as they get more into Pac-12 play to contend for a bowl game.

Sure, it was against Kent State but the lesser competition doesn't take away from what Taylor was able to do against the Golden Flashes on Saturday. He found the holes his offensive line made at ease and when he needed to call his own number, he broke seven tackles, gained 115 of his 186 yards after contact and ran for 9.8 yards a carry. His five total touchdowns on the afternoon push his season total to 16 as he's secured his top spot among running backs on the Heisman watch list yet again.

The Gophers have quietly moved to 5-0 after securing the program's 700th win on Saturday against Illinois. Smith was a big component of the 700th victory despite finding the end zone just once. He ran the ball 24 times but tallied 211 yards on the ground with 154 of those yards coming after contact and finishing with eight broken tackles. He gained an additional eight first downs on his carries and powered Minnesota on the ground as he returns to full health.

Hodgins continues to rattle off big-time catches for the Beavers despite coming away with only their second win of the season. Hodgins finished Saturday as the weekend's highest-graded receiver by some margin, hauling in all 10 catchable passes thrown his way for 123 yards and three touchdowns. He's a big-time reception machine and leads the country with 13 big-time catches so far this season.

Catching the game-winner in the third overtime was just the icing on the cake for Proche, who finished the game with 11 receptions for 153 yards and two scores. He came down with multiple contested catches but none more important than his brilliant toe-tapping reception for the game-winning score as the Mustangs improved to 6-0 and became bowl eligible against the same team that knocked them from bowl contention a year ago.

Swain opened the scoring for the Gators with his long 64-yard touchdown in the opening quarter against Auburn and he finished the day with an impressive six catches for 146 yards. He broke a tackle and gained 80 of his yards after the catch, seeing a 146.8 passer rating when targeted on the day.

Keane and the Hokies went into Miami and came away victorious after a dominant first half of scoring. Keane finished the day with three receiving scores and 73 yards through the air while also finishing with plus-grades in both the run game and in pass protection. He churned out 63 of his yards after the catch in an impressive outing.

Capping a terrific day of blocking with a touchdown, Cosmi has solidified himself as one of the nation's top tackles. He allowed just a single QB hurry on his 39 snaps in pass protection while possessing a big grade in the run game but his highlight of the night came when he took a reverse pass (thrown behind QB Sam Ehlinger) 12 yards for a rushing score that ultimately put the game out of reach for the Longhorns.

In what was a common trend for the Iowa State offensive line, Knipfel didn't allow a single QB pressure on 33 pass-blocking snaps while also finishing with the country's highest grade for the run among all guards.

No shocker here as Biadasz paved the way for another big game on the ground for RB Jonathan Taylor. Biadasz led the Badgers with his 73.7 run-blocking grade that was good enough for third in the country and didn't allow a single QB pressure on 18 pass-blocking snaps.

Braun continues to exceed expectations in Texas' pass-first offense. Coming from the triple-option offense of Georgia Tech, Braun finished with the country's second-highest run-blocking grade and allowed just four hurries without a QB hit or sack on his 40 reps in pass protection.

Another Cyclone to make the list, Meeker finished with the nation's highest run-blocking grade among tackles by 5.0 full grade points. He also finished with a clean sheet in pass protection, not allowing a single pressure on his 33 pass-blocking reps. 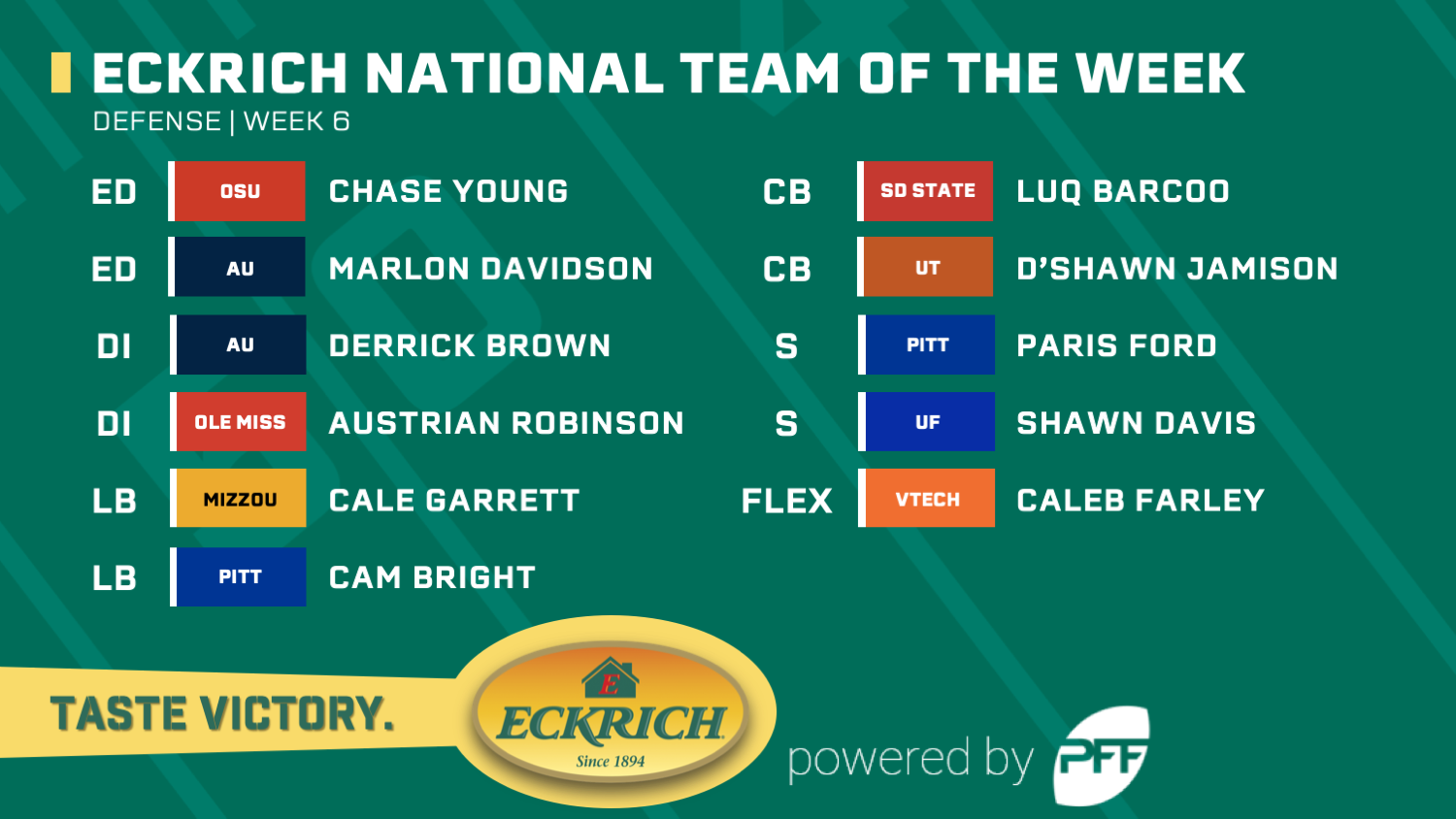 Winning just 33.3% of his pass-rushes this week, Young still led the country in that regard this weekend after he demonstrated what makes him such a rare talent against Michigan State. He finished the game with nine pressures and elite overall and pass-rush grades as he's furthering himself from the pack at edge defender this season.

Davidson and the Tigers didn't get the victory against the Gators but Davidson and his teammate below were almost unstoppable. Davidson finished with the nation's second-highest pass-rushing grade and came away with seven total pressures that included a sack, a hit and five more hurries. He had plus-grades across the board but made life difficult for the passing attack from Florida.

Brown was unstoppable, except for the Florida 35-yard line that tripped him up on a potential scoop ‘n' score moment in the first half. Aside from tripping on the fumble return, Brown finished with five total pressures that included a sack, a hit and three hurries. He chipped in with two stops against the run, and much like Young, cementing himself as one of the nation's top defensive linemen.

Coming away with six total pressures from the interior, Robinson tallied a sack, a hit and four QB hurries against Vanderbilt as he consistently pushed the pocket with ease. He came away with another stop in run defense and was a space-eater for the Rebels all game.

Garrett had a pick-6 and was a yard away from having another interception returned for a touchdown against Troy as he was utterly dominant across the board against the Trojans. He finished with an elite grade in coverage and on the catches he did allow, kept them for negative yardage as the longest reception he allowed went for a loss of one yard.

Playing exceptionally well in all three facets of the game, Bright was dominant for the Panthers as they got another strong victory against Duke. He blitzed Quentin Harris just eight times but came away with three pressures, secured seven total tackles including four defensive stops and allowed just seven yards on 30 snaps in coverage and three as the primary coverage defender.

Barcoo came away with the national-leading three interceptions against Colorado State as he locked down his man in coverage more often than not. He came away with another pass breakup and despite allowing 90 yards in coverage on the night, finished with just a 41.2 passer rating when targeted.

Jamison entered his name into the conversation for top interception of the season when he skied over Sam James for a one-handed pick that all but secured the Longhorns victory. For the afternoon, he was targeted seven times, allowed just four catches for 29 yards and had two interceptions.

While coverage grades aren't necessarily the best place to look at a safety's impact on the game, Ford's coverage numbers were too good to look over. He was targeted as the primary coverage defender four times, allowing just two catches for 11 yards and came away with two interceptions to equal a 16.7 passer rating when he was targeted. He made 10 total tackles including five defensive stops in a dominant game.

Davis read a Bo Nix pass perfectly, intercepting a tight-window attempt with relative ease as that really catapulted the Gators to victory over Auburn. He grabbed five total tackles and on his lone other target in coverage, allowed just four yards while making a defensive stop in the run game as well.

Farley had a big game in coverage for the Hokies as he was integral in forcing Miami to backup QB N'Kosi Perry. Farley nabbed two first-quarter interceptions and in spite of allowing a touchdown in coverage late, still had plus-grades across the board. He was targeted eight times, allowing three receptions for 46 yards but had two picks and an additional pass breakup to boot.