The Week 4 Eckrich Team of the Week powered by PFF saw some impressive performances and, of course, the strength of opponent also factored into the overall selections as did the PFF player grades. 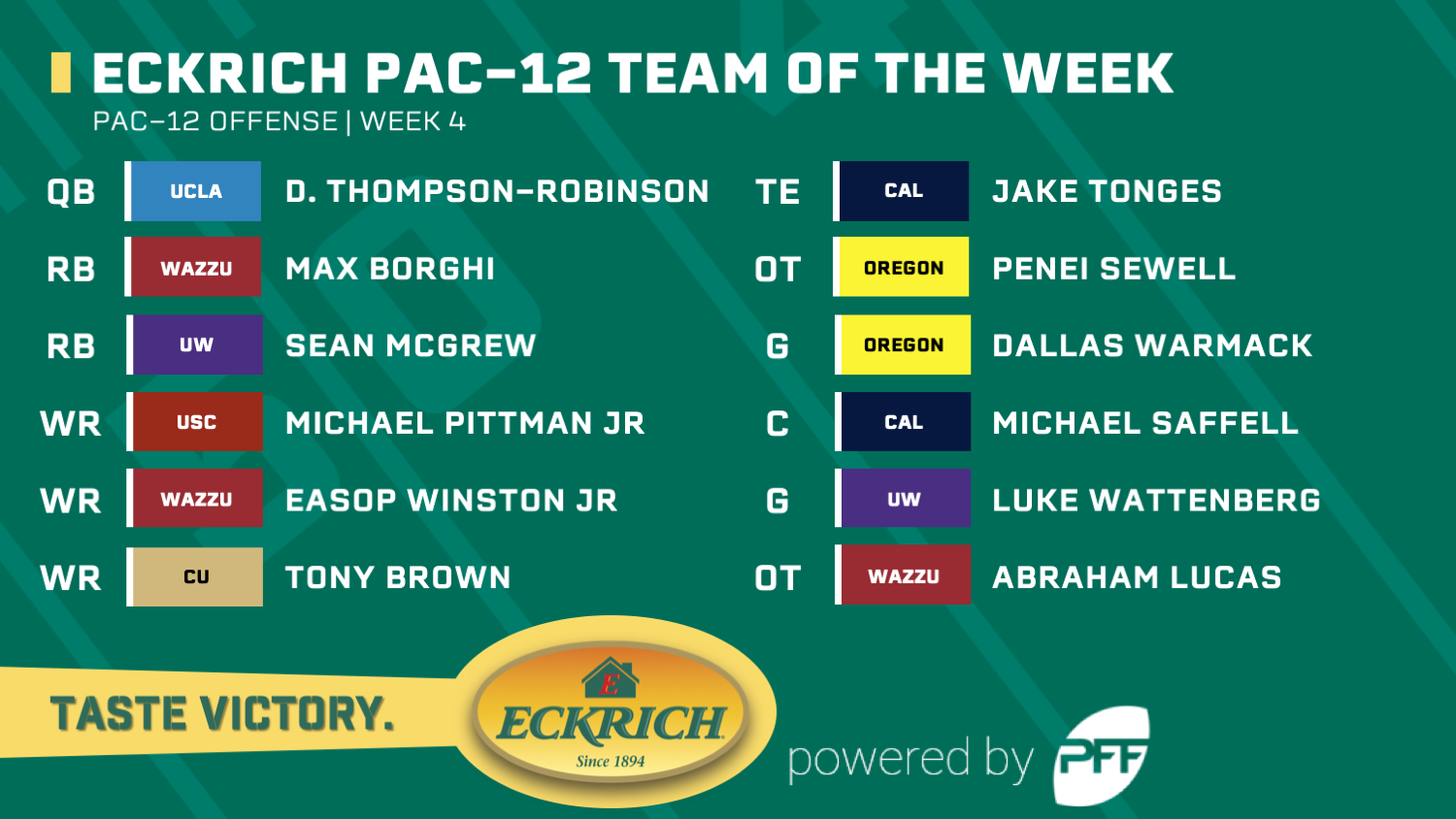 Thompson-Robinson had arguably the best game of his career in the high-scoring thriller against Washington State. He completed 25 passes for 508 yards, four big-time throws and five touchdowns in the massive victory while adding another two scores running the ball.

The Cougars could not pull out a win over UCLA but Borghi showed his talent carrying the ball 15 times for 123 yards and added another two receptions for 80 yards and a touchdown. He forced six missed tackles and gained 80 yards after contact on the night which contributed to him leading the conference in rushing grade at the position.

On 18 carries, McGrew ran for 110 yards, averaging 6.1 yards per attempt and picking up five first downs along the way. He also had four explosive runs that went over 10 yards which led all running backs in the Pac-12.

Friday night saw Pittman's best game as a collegiate, hauling in 10 receptions for 232 yards and five first-down catches. He scored on a long 77-yard bomb in which he nabbed a contested catch and rattled off several yards after the catch. He was a valuable go-to target for third-string QB Matt Fink.

Winston was the most-targeted receiver in the conference with 13 passes being thrown his way. Of the 13 targets, he reeled in 10 for 114 yards and three first-down catches. His four touchdowns on the night would go on to tie for most in the nation in Week 4.

Once star receiver Laviska Shenault Jr. went down early in the first quarter, all eyes were on the rest of the Colorado pass-catchers to see who would fill the void, Brown certainly did. He hauled in all nine of his targets for 150 yards and three touchdowns. He also caught four receptions that moved the chains and had a perfect 158.3 passer rating when targeted.

On four targets, Tonges exploded for 88 yards and a touchdown as he saw the highest passer rating when targeted by any tight end in the conference. His 60-yard touchdown reception was one of the most impactful plays on the day against SEC opponent Ole Miss.

Sewell has put forth three straight games of ridiculous grades, finishing the contest against Stanford with an elite pass-blocking grade on Saturday. On his 30 snaps in pass protection, he didn't allow a single QB pressure and was sharp in the run game as well.

Yet another strong performance from an Oregon offensive lineman, Warmack didn't give up a pressure on 30 pass-blocking snaps, adding to his solid 2019 campaign. He has yet to allow a sack or hit on QB Justin Herbert thus far this season.

Saffell played well in the Bears' victory, conceding just one QB hurry on 46 snaps in pass protection. He was precise in the run the game also, posting the conference’s best run-blocking grade among centers.

Wattenberg didn’t allow a single QB pressure on 30 reps in pass protection giving Jacob Eason plenty of time to throw. He has posted back-to-back games with stellar pass-blocking grades so far this season.

One of the most impressive performances from the offensive line came from Lucas who played 66 pass-protection snaps at right tackle and allowed just one QB pressure. On top of his outstanding pass-blocking play, he posted a top-five run-blocking game in the conference. 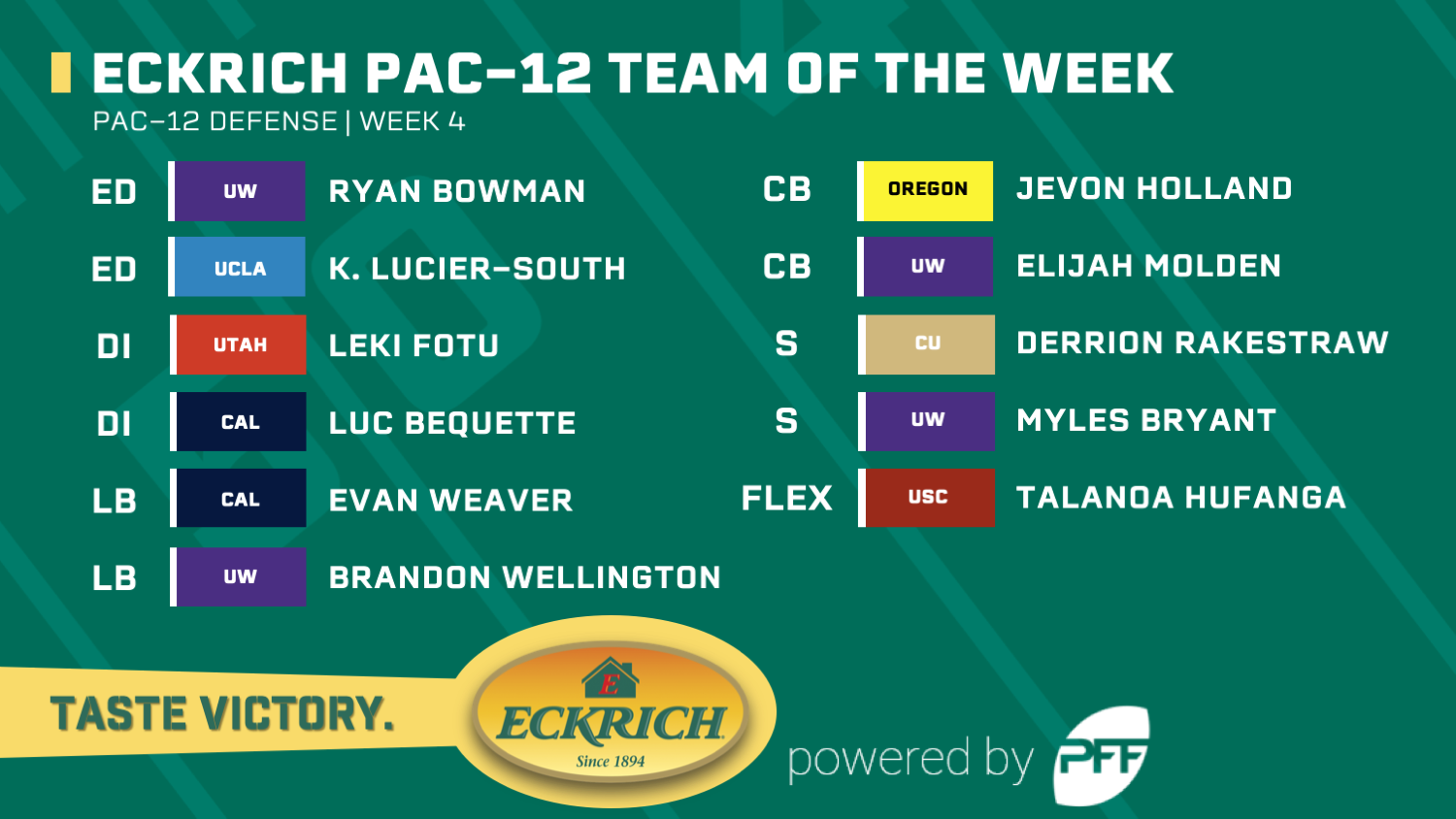 The Huskies dominated the Cougars in Week 4 and the defense played a key part. Bowman was fantastic off the edge, securing a defensive stop, two QB pressures including a sack that forced BYU quarterback Zach Wilson to fumble the ball away. He earned the conference’s second-highest defensive grade, proving how dominant his performance truly was.

Lucier-South was suspended from participating in team practices and games in spring due to academic issues. In his first game action back, he highlighted just what the Bruins were missing the past three competitions. Lucier-South generated five total pressures including a sack and four hurries, on 41 pass-rushing snaps. He also added a defensive stop, a forced fumble and allowed just two receptions on three targets for a total of eight yards, displaying his coverage ability as an edge defender.

The Utes didn't get the win on Friday night but Fotu was certainly not to blame on defense. He recorded a QB hit on the pass-rush as he won the majority of his snaps but USC got their passes off too quick for the pressure to be recorded and Fotu was also stout in run-defense, clogging lanes for the limited times the Trojans ran the ball.

Cal’s defense was great against the run and much of that success could be attributed to the play of Bequette. He was stout in run-defense, finishing with three defensive stops without a missed tackle on 27 run-defense snaps. He was solid in pass-rush situations as well, contributing two QB pressures, forcing the Ole Miss offensive line to double team him on many occasions.

Another Cal defender, Weaver, was crucial in Cal’s huge victory over the Rebels and played outstanding in all facets of the defense. He recorded 16 total tackles, seven QB pressures, 12 defensive stops which lead the nation and allowed just four receptions on seven targets for 33 yards and a passer rating of 69.3.

Wellington was a key contributor for the Washington defense, racking up two QB hurries and a defensive stop from his linebacker position. He also returned a fumble 69 yards for a touchdown late in the first quarter, foreshadowing the rest of the game for the BYU offense.

On five targeted passes against Stanford, Holland allowed a mere two catches for just 18 yards in coverage. He made an interception and an additional pass breakup, limiting K.J. Costello to just a 10.8 passer rating when targeted Holland as the primary coverage defender.

Molden made his impact known in the Huskies secondary, causing havoc on the Cougars receivers. He allowed seven receptions on 13 targets for 96 yards but had two pass breakups and two defensive stops. Molden also beautifully forced a fumble from the receiver’s hands which ultimately was recovered by BYU.

Rakestraw played 43 snaps in coverage and was targeted five times, giving up three receptions for 74 yards but made up for the yardage but snatching an interception. He also showed his ability to stop the run by having three defensive stops on just 23 run-defense snaps and posting an elite tackling grade that finished just behind Myles Bryant for best in the conference.

The last of the Washington defenders, but certainly not the least, Bryant had another stellar game for the Huskies. He had seven total tackles, a tackling grade that finished best among on Pac-12 defenders, a defensive stop and allowed just a reception in coverage for a mere five yards as BYU tried to stay away from his coverage deep.

Hufanga had a significant performance against Utah’s rushing attack, recording 10 solo tackles and six defensive stops, most by any defensive back in the conference. He was also great at generating pressure on the quarterback, forcing two QB hurries on just two blitzes.