The Week 12 Eckrich Team of the Week powered by PFF saw some impressive performances and, of course, the strength of opponent also factored into the overall selections as did the PFF player grades. 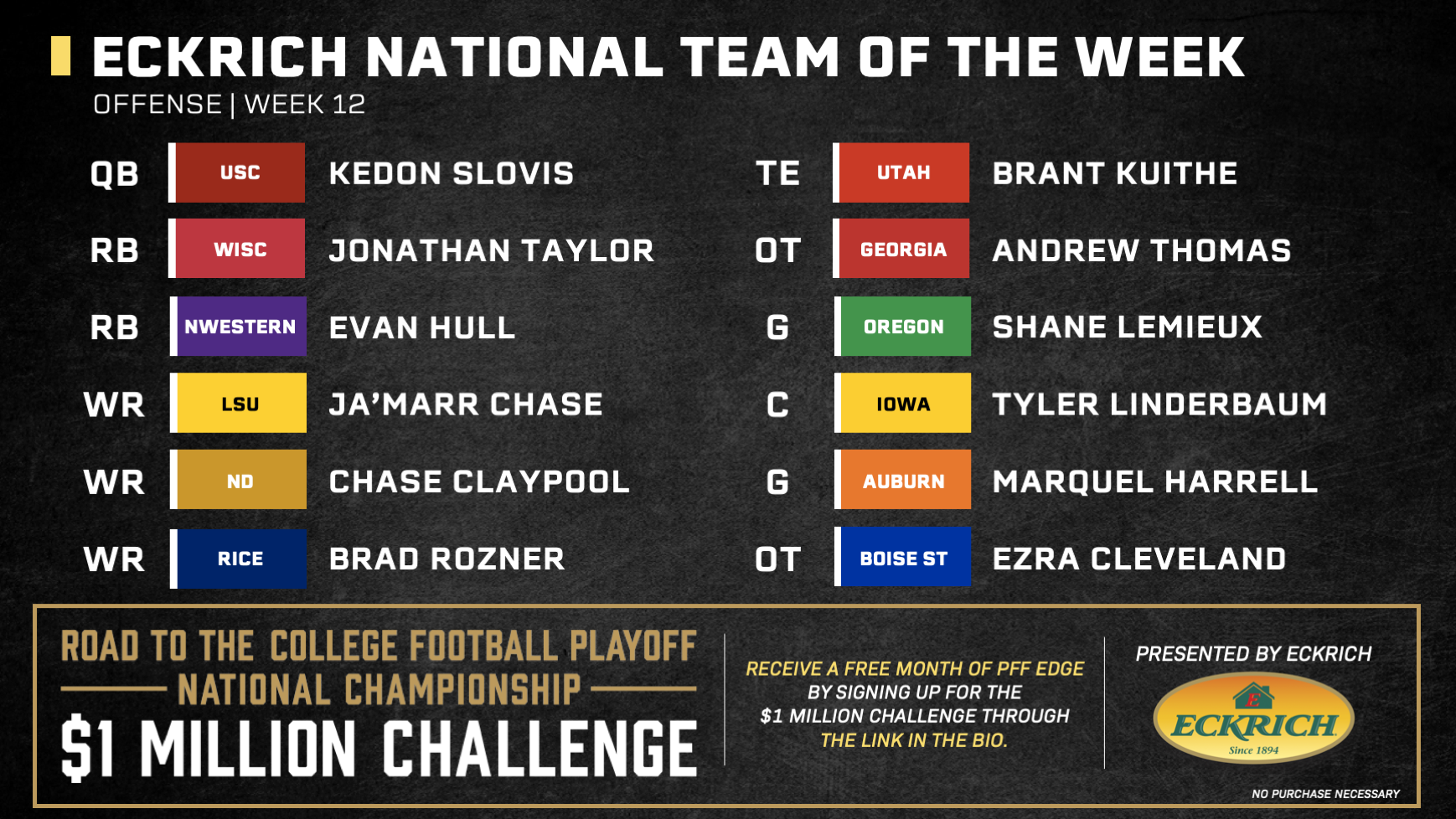 Slovis put on a show against a top-notch defensive secondary when the Trojans cruised by Cal in the late window on Saturday night. Slovis connected on 29-of-35 passes for 406 yards, averaging 11.6 yards per attempt and throwing for four touchdowns against no interceptions. He was brilliant through the air and 10 more of those passes moved the sticks for a first down as he kept the USC offense in rhythm and on schedule in the win. Slovis has matured before our eyes and the future is bright for this Air Raid USC offense.

Eclipsing 200 yards on the ground again, Taylor needed just 25 carries to do so while moving the chains on 10 runs and scoring twice. He broke 11 tackles against Nebraska and gained 120 of his 204 yards after contact. He's setting records left and right and is about to cap his third straight year with at least 1,000 yards after contact and at least 66 missed tackles forced on the ground.

Sure, it was against UMass, and sure the Wildcats were favored by a hefty margin but Hull was impressive on the ground nonetheless. He gained a national-best 220 yards on 25 carries and ripped off four touchdown runs. He gained 162 yards after contact, broke five tackles and churned out four runs of at least 10 yards in a dominant display of running.

Chase and the Joe Burrow-led LSU offense looked sharp on Saturday night, avoiding any letdown after the Alabama victory. Chase hauled in eight receptions for 227 yards as he was the only receiver in the country to top the 200-yard mark from a receiver in Week 12. He scored three touchdowns, moved the sticks for five first downs and broke three tackles while racking up 13.0 yards after the catch per reception.

Claypool and QB Ian Book got things rolling early against Navy as he scored three first-half touchdowns while adding one more in the opening stages of the second half before his day was done. In total, he reached 117 yards on seven catches with four scores and two more first downs. He saw a perfect 158.3 passer rating when targeted in the game as the Irish got past what is looking like the toughest remaining test on their schedule with ease.

If you missed Rozner in action for the Owls, you missed quite the performance. He was targeted 10 times, hauled in eight receptions for 130 yards and three scores while winning multiple contested-catch opportunities. He didn't have the yards after the catch totals like his counterparts here but he was an integral aspect of the Rice offense, gaining three additional first downs in clutch moments in the win over Middle Tennessee.

Kuithe was the big-play threat for the Utes in their win over UCLA, ripping off a 69-yard touchdown reception while hauling in four more catches for an additional 63 yards and four first downs. He broke two tackles and had a perfect passer rating when targeted as well as plus-grades in the run-blocking and pass-blocking game.

Handling the Auburn front with relative ease, Thomas kept a clean sheet in pass protection, allowing no pressures on 31 pass-blocking snaps while also holding the country's third-highest run-blocking grade among all tackles in Week 12.

You can almost bank on an Oregon lineman making the National Team of the Week every week and this week's representative is Lemieux. He finished the game with a perfect record in pass protection, not allowing a pressure on 32 pass-blocking snaps while putting forth a dominant game for the run.

The Hawkeyes ended Minnesota's perfect season and Linderbaum was dominant in plugging up the middle of the stout Gopher defensive line. He didn't allow a QB pressure on his 29 pass-blocking snaps while putting forth the country's best run-blocking grade among centers.

The result aside, Harrell was absolutely dominant for the Tigers on the interior of their offensive line. He didn't allow a pressure on his whopping 58 pass-blocking snaps and put forth the country's highest run-blocking grade to boot. He was as impressive a lineman in the country but it may have been overshadowed by his team's loss.

A regular fixture here, Cleveland once again makes his presence felt on the National Team of the Week with a dominant outing for the Broncos. He didn't allow a single pressure and had a top-notch run-blocking grade in the Boise State win over New Mexico. 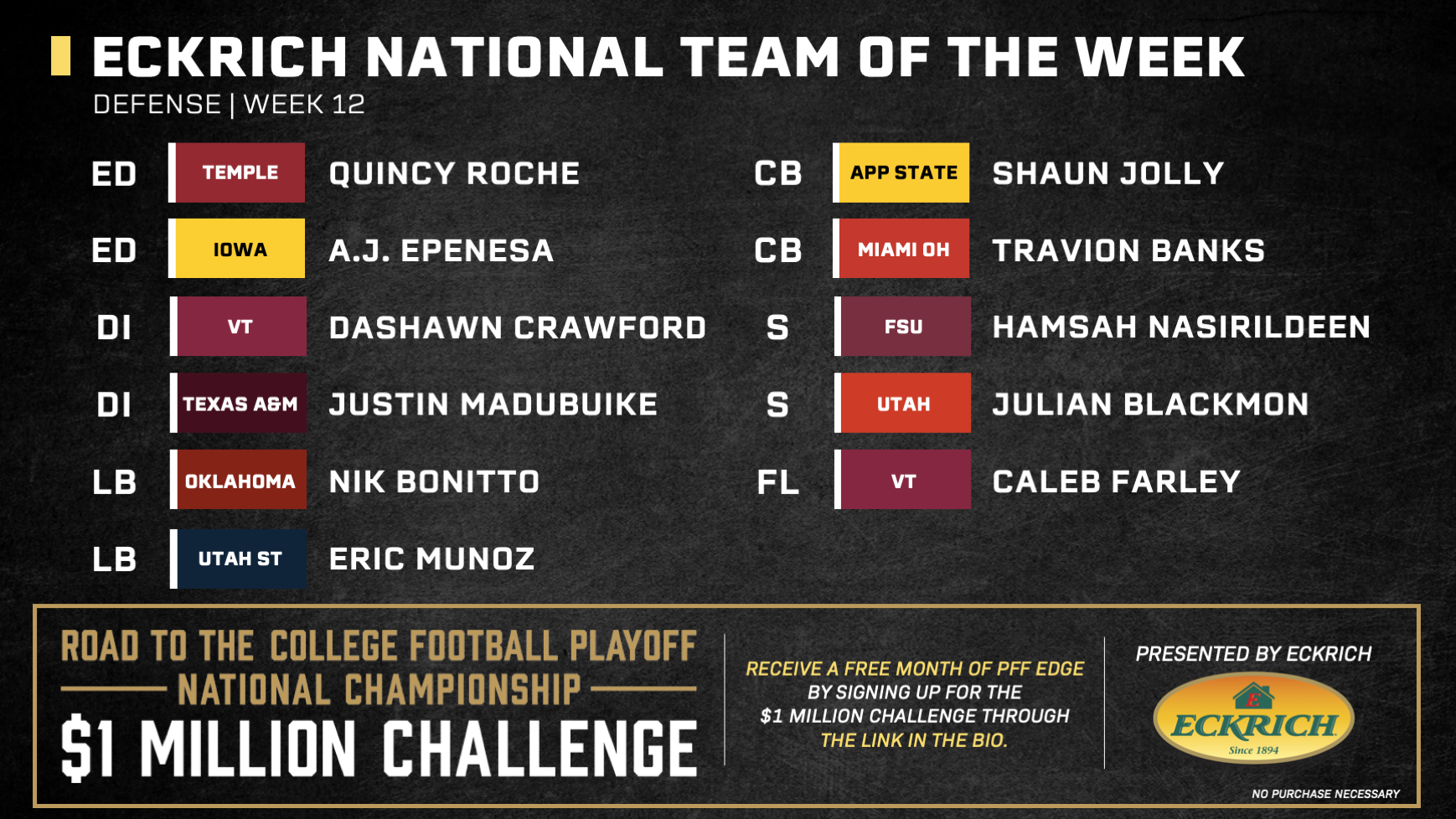 For the second straight week, Roche finds himself on our National Team of the Week after a nine-pressure performance against Tulane. He recorded three sacks, five more stops against the run and had nine total tackle attempts in the game. With a forced fumble also to his credit, Roche looks every bit the part of highest-graded edge defender this weekend.

A constant presence in the Minnesota backfield, Epenesa finally broke out at the right time for the Hawkeyes in 2019. He finished the game with nine total pressures including three sacks, each sack seemingly coming at pivotal moments of the game. He made four defensive stops in the game in total and forced a fumble as he put forth his highest-graded game of the 2019 season by a longshot.

The Hokies looked every bit of potentially the ACC's second-best team on Saturday and Crawford was a big part of that. On just 16 pass-rushes from the interior, he ripped off two sacks and two hurries while forcing a fumble and not missing a single tackle. He was dominant just as the rest of the defense was in shutting out Georgia Tech.

The Aggies cruised past South Carolina as Madubuike showed off what has made him one of the highest-graded interior defensive lineman this season. On 40 pass-rushes, he recorded seven total QB pressures including three hits and four hurries while he needed just 11 snaps against the run to record a defensive stop. He made four total tackles without missing a single attempt in what was a dominant outing.

Up by three and with Baylor driving for a field goal to tie in the waning stages of the fourth quarter, Bonitto had a chance to seal the come-from-behind victory against Baylor when an interception clanged off his hands. He got a second chance on the very next play, and made that chance count when he perfectly read an out route and stepped in front of the pass for the game-winning interception. In total, however, Bonitto was targeted three times and allowed just one reception with the aforementioned pass breakup and game-sealing interception to sport a 2.8 passer rating when targeted.

The Aggies defense received a big-time performance from Munoz, who recorded two interceptions and 12 total tackles without a single missed attempt. He was heavily targeted, seeing nine passes come his way but allowed just four receptions for 36 yards and saw a 16.2 passer rating into his primary coverage. Seven of his total tackles went for a defensive stop as he was the thorn in the Wyoming Cowboys' side all night.

Finishing with nearly three times as many plays on the ball as he allowed receptions, Jolly had one of the more dominating performances in coverage we've seen all season long. He was targeted eight times, allowing just two receptions for 13 yards. He made two interceptions and had three more pass breakups to give him five total plays on the ball and a 0.0 passer rating into his coverage.

Banks and the RedHawks got a big win earlier in the week in mid-week #MACtion as he intercepted two passes and broke up another against Bowling Green. On the back of Banks' big-time performance in coverage (he allowed a passer rating of 0.0), Miami has clinched their spot in the MAC Championship game already and will await the winner of the MAC West.

In a strong outing against lesser competition, Nasirildeen did everything you'd hope from a safety against an FCS opponent. He maintained coverage on a busted play and picked off an errant throw while breaking two tackles and making shifty moves on an 80-yard interception return for a touchdown. Nasirildeen also recorded 10 solo tackles and didn't miss a single tackle attempt and finished the game with four defensive stops to boot.

On a perfectly-timed blitz up the middle, Blackmon made a splash play by forcing a fumble on a sack against UCLA QB Dorian Thompson-Robinson but that wasn't the only turnover he forced. On three targeted passes into his coverage, he allowed just one catch for seven yards and picked off another. He and the Utes defense are forming perhaps one of the nation's top defenses and will be quite the unit to take on down the stretch.

Despite not even being targeted once as the primary coverage defender, Farley still found the football and made his name known against Georgia Tech. He flew around the field with great ease and pulled in an interception against the YellowJackets as he put forth the weekend's third-highest grade in coverage among cornerbacks.