Galina: Josh Heupel's offense is exactly what Tennessee needs to get back on track

Tennessee's head football coach search is over, culminating in the hiring of UCF’s Josh Heupel less than a week after the athletic department hired UCF’s Danny White for its also-vacant athletic director role.

The Volunteers have been underwhelming over the past two decades, as the power vacuum in college football has shifted to shinier new programs. No better can the Vols' struggles be seen than in their inability to move the ball on offense. But with Heupel, they get a unique offensive approach that can be a quick fix for their woes.

Heupel can clearly coach offense, but the situation in Tennessee — already dire — was made even worse so by impending sanctions against the school from the NCAA. We still don’t know exactly how hard the NCAA hammer will come down, but the player movement away from the program has already started. It has been a mass exodus.

As of writing, 20 Tennessee players who came to Knoxville with at least a three-star rating on 247Sports are in the transfer portal or have already left the program, including grad transfers. Tennessee’s recruiting class is currently sixth in the SEC and 15th overall on 247Sports, but recruits could look at the situation and decide to stay away or flip entirely by next week.

All this means is that it’s probably not a one-year or even a two-year fix for Heupel and White. They might not get their hands on a program that has all the available resources for a few years depending on the NCAA’s decision regarding sanctions.

Luckily, his offensive philosophy can help Tennessee at least tread above water for a couple of seasons. He’ll also be getting Virginia Tech transfer quarterback Hendon Hooker, who significantly improved in his two years as the Hokies' starting quarterback, going from a 74.6 PFF grade in 2019 to an 81.5 mark in 2020.

The Heupel offense is a chip off the old Baylor offense from the early 2010s. It’s performed via a quick diagnosis of pre-snap space and then executed via a power run game inside or a one-on-one vertical shot outside. In an ideal world, they would love to use the one-high versus two-high binary against the defenses they play. When teams show a single-high safety against them, it means they are going to have access to vertical shots on the outside down the sideline. And when teams show a two-high safety against them, it’s the slot receivers who can now play in space.

In these same scenarios, UCF's average depth of target went up 2.8 yards from the two-high world from the one-high world. When the Knights see there is only one safety in the middle of the field, they want to throw it; it was a pass 63% of the time when they saw only one safety lingering pre-snap, the 19th-highest rate in the country last year. And they want to throw it deep.

The quarterback locks the safety in the middle of the field using his eyes or play action and then throws the ball down the sideline. The receivers are generally running vertical option routes. To distill these routes down to their purest forms, it’s basically “if I’m even, I’m leaving” routes. They want to run deep if they can beat their defender off the snap, and they will choke it down and hook if they fail after X amount of yards. The idea is always to be right.

This heatmap is where the ball was thrown against one-high coverages for UCF over the past two seasons combined in every situation. There was nothing over the middle of the field. 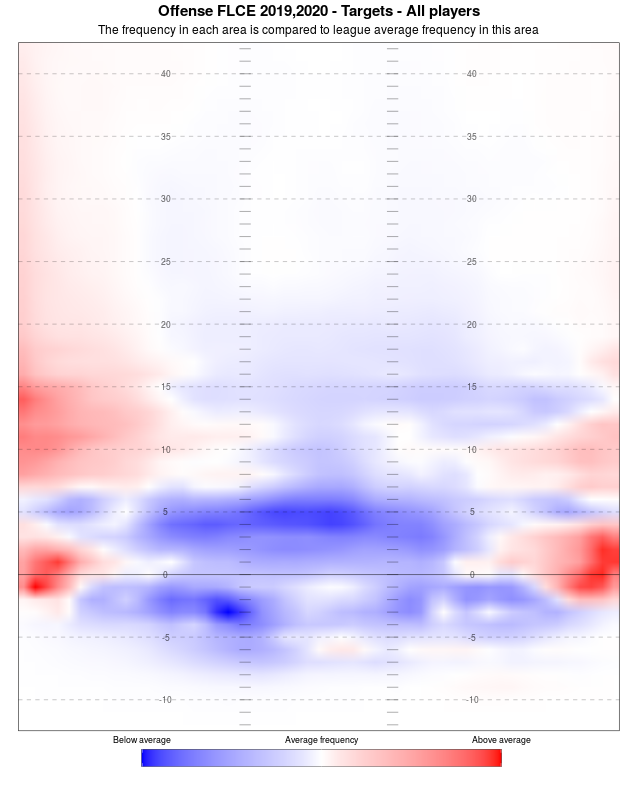 Against two-high, the ball can’t just be thrown down the sideline because you aren’t always getting those one-on-one situations. UCF's target map on such plays shows that. 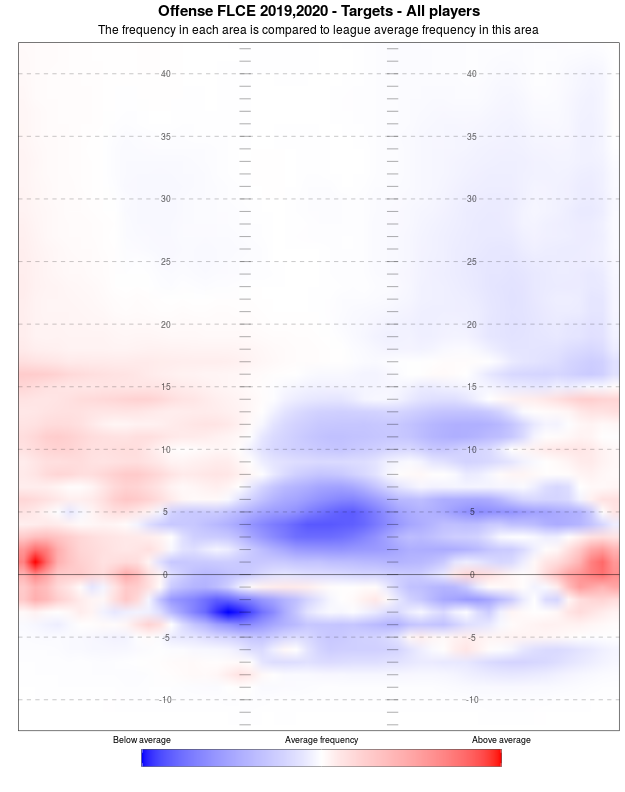 There’s a little more play inside and, as mentioned, finding the slot in these scenarios has been more fruitful, but they will still find a way to throw the ball outside. If a team is giving them straight Cover 4 to one side, the slot receiver will run the safety off to give the wide receiver the same one-on-one situation. No team has thrown more go routes or back-shoulder go routes in the aforementioned neutral situations over the past two seasons than UCF (79), which tied with an Arkansas State that runs a similar offense.

The whole point is to make your non-professional college quarterback a robot. Instead of having him read out all these intricate concepts, the Knights just threw the ball up to the sideline. No routes are run to the middle of the field, so you are taking out eight or nine defensive players right off the bat.

Can my receiver win down the sideline or not? That’s the only question the quarterback needs to ask himself. The point isn’t even to complete a ton of balls. UCF completed only 30% of its go or back-shoulder go throws — but for 11.7 yards per attempt. Every completion is a first down, and the Knights kept doing it until they hit for an explosive play. They also took away the capabilities for the defense to get its hands on the ball. Only twice over the past two seasons did UCF have a turnover-worthy throw on the go routes. Overall, the team's interception rate ranked sixth-lowest in the country over the past two seasons.

These simple reads for the quarterback and the reliance on downfield shots (11th-most 20-plus yard throws over the past two seasons), plus high screen-game usage (27th-highest screen rate over the past two seasons) and a high RPO rate (10th highest rate in the country over the last two season), means there isn’t a lot left for the quarterback to mess up. Most college teams don’t have future NFL quarterbacks on their roster, so simplifying the system into such a binary way has been how Josh Heupel and a growing number of other college offenses are spending their teaching time.

Turning young quarterbacks into robots is good for the sport because explosive offenses win games, and that’s what Tennessee is hoping to get right from the jump. With Hooker, they’ll also add a dynamic runner who gained 725 yards on 6.9 yards per carry last season. Specifically, he gained 598 yards and 7.0 yards per carry on non-scramble runs. This type of quarterback will help immediately, as Heupel can create some unique ways to get him involved in the run game. It means that if teams want to spin to one-high and load the box, the Vols can still create a numbers advantage with the quarterback run game if they really aren’t hitting on explosive shots down the sideline.

This will be a big change for the offense led by Jim Chaney for the past two seasons. Just looking at where the routes were run in the Chaney offense (left) and the Heupel offense (right) is striking: 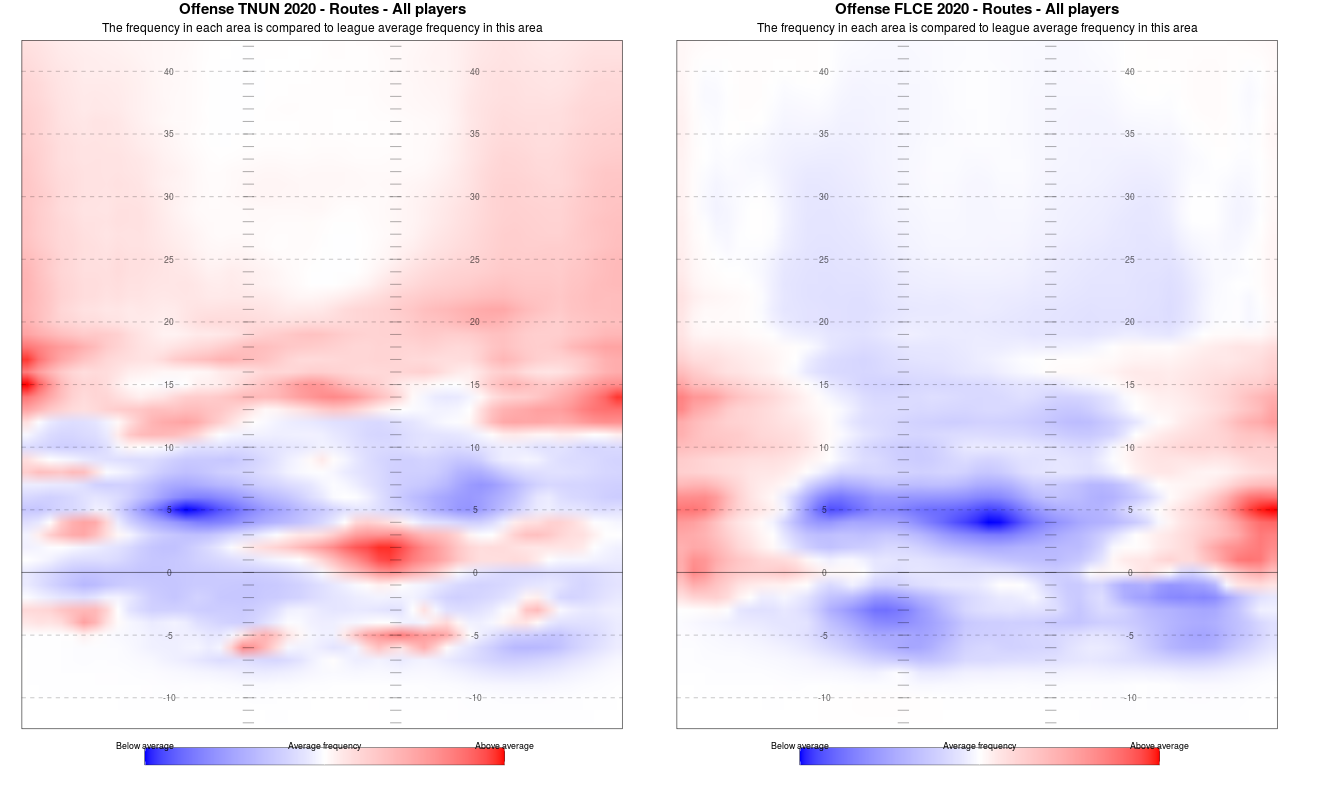 The new offense will look nothing like the relatively difficult setup that Chaney and Jeremy Pruitt put their quarterbacks in:

Pruitt did a good job reshaping the defense in his image and produced relatively good results over his time with Tennessee, but the offense never turned around. With most SEC offenses opening themselves up and scoring more points, the Volunteers needed to change things up on offense.

Again, with all the player movement, it will be a big ask for Heupel to get the offense to improve to the extent he did in his first year at Missouri. But his offense does work — and usually in spite of a lack of player talent. That’s what Vols fans will be banking on to start the Heupel campaign.