The dust has settled on the 2019 regular season at the FBS level and it's time to take a look back. Ahead of the MAC championship, we take a look at the best players at their respective positions with an in-depth look at how they graded over the course of the full season.

Utilizing our play-by-play grades of every player on every play of every game, our All-Conference USA Team takes into account every player's actions on the field on Saturdays while also utilizing our wealth of signature statistics to determine the list. The strength of opponent and consistent play also factor into our selections detailed below. 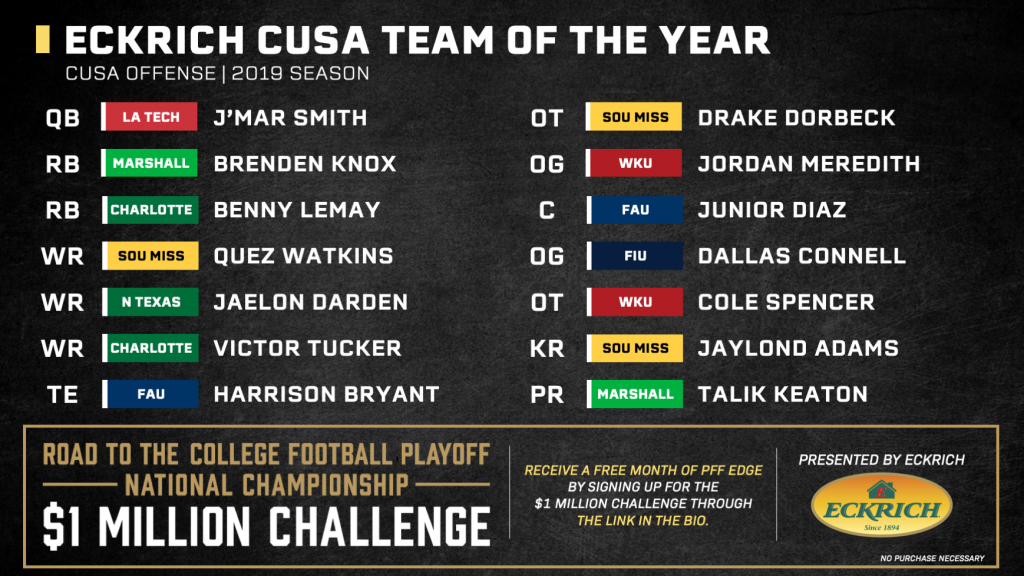 The Bulldogs finished their 2019 campaign with a 9-3 record, falling just shy of the Conference USA championship, and a large reason for their success was the play of their redshirt senior quarterback. Smith finished the season with an 86.0 passing grade, which ranks 15th in the nation. He didn't put the ball in harm's way much through 12 football games, compiling only six turnover-worthy plays to 19 big-time throws. The Louisiana Tech signal-caller finished the season with 2,817 yards and 17 touchdowns passing, and he added another 337 yards and three touchdowns on the ground, showcasing his ability to make plays outside of the pocket.

Rushing for 1,249 yards and 11 touchdowns across 244 carries, Knox currently ranks second among all running backs in the conference in overall grade (82.3). He’s also forced 50 missed tackles on the ground and totaled 807 yards after contact, both of which led the conference in 2019.

Lemay played his final collegiate game last Saturday against Old Dominion and added another 100-yard performance accompanied by a pair of rushing touchdowns. He ended his senior season with 1,029 yards and nine touchdowns, averaging an impressive 5.7 yards per carry. Lemay also contributed in the 49ers' passing attack, recording 235 yards and four more touchdowns, flashing his ability as a receiver out of the backfield.

Hauling in 54-of-87 targets for 1,018 yards, 30 first downs and five touchdowns, Watkins has been one of the best receivers in the entire Group of Five. His 2.99 yards per route run and 9.1 yards after the catch per reception were both second in the conference among receivers with at least 50 targets on the season.

Darden’s 12 receiving touchdowns are the most in the conference by far. He was quarterback Mason Fine’s favorite target, seeing 108 of Fine's pass attempts on the year, the most of any receiver in the Conference USA. He was able to reel in 74 of his targets for 735 yards and 26 first downs. The Mean Green’s leading pass-catcher generated most of his production from the slot, amassing 700 yards and 10 touchdowns from the position, concluding his junior season as one of the best receivers from the position.

The redshirt sophomore ended the year as the Conference USA’s second-highest-graded receiver, dropping just two passes on 82 targets. He nabbed 49 receptions for 848 yards and six touchdowns in the Charlotte offense, gaining another 33 first downs. Tucker was a key reason for quarterback Chris Reynolds' success in 2019, providing sure hands and a reliable target for him to throw to. Both players will look to further increase their rapport and production as they will both be returning to Charlotte in 2020.

One of the best tight ends in the country, Bryant led in both overall (93.0) and receiving grades (93.5) at the position. His 965 yards, 49 combined first downs and touchdowns, 3.15 yards per route run and 11 missed tackles forced were all nation-leaders, as well. He also posted a 126.4 passer rating when targeted that ranked fifth among tight ends with at least 40 targets on the year. Bryant will look to continue his dominant play in the Atlantic Owls' Conference USA Championship Game against UAB next Saturday.

The owner of the highest overall (79.3), pass-blocking (89.3) and run-blocking grades (79.2) among offensive guards in the conference belong to Western Kentucky’s Meredith. He has allowed just five total pressures on 470 reps in pass protection, good for the Conference-low pressure percentage (1.1%).

Among guards with at least 300 snaps in pass protection, Connell has forfeited the fewest amount of quarterback pressures, with just four against his name. He is tied with Meredith for the lowest pressure percentage allowed at 1.1%, providing plenty of time up the middle for his quarterback to pick apart opposing defenses.

The only offensive tackle to own a higher pass-blocking grade than Dorbeck in the conference, Spencer had a PFF pass-blocking efficiency of 98.9, which ranked second. He has forfeited nine total pressures on 409 pass-blocking reps, none of which have resulted in a quarterback sack. 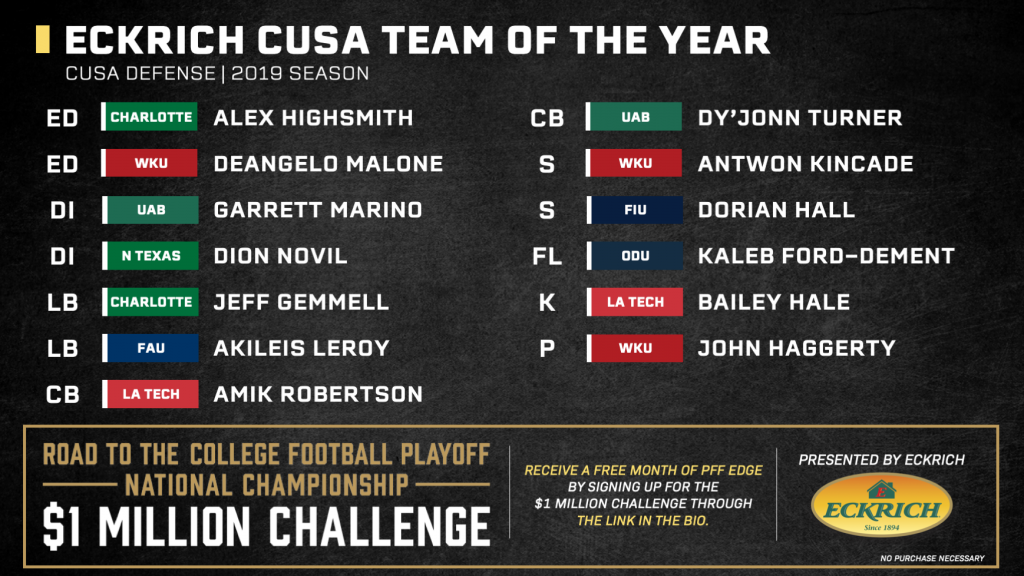 Highsmith has recorded the second-best PFF pass-rushing grade (91.9) and overall grade (90.0) among qualifying Conference USA edge defenders thus far this season. His 16 sacks lead the conference and are second-most in the nation, just two behind Ohio State’s Chase Young.

With 780 total snaps, Malone has been on the field more than any other edge defenders in the conference. He did not take any plays off, posting the fourth-best pass-rush grade (84.6) in the Conference USA and generating 52 total pressures that are tied for the most. His 58 defensive stops—tackles that constitute a loss for the opposing offense—is the most in the conference by a wide margin, as the next closest player owns 44.

Marino enters the Conference USA Championship with the highest overall grade (90.7), pass-rush grade (90.1) and second-highest run-defense grade (90.4) among the 43 qualifying players at his position. He also ranks fourth among the same group of qualifiers in pass-rush win rate (14.0%) and first in total pressures (40).

The Mean Green had one of the best defensive interior players in the conference, as Novil owned the second-best overall grade (88.1). He generated the most defensive stops from the position with 33, including two forced fumbles and five sacks on the year.

Gemmell currently ranks first in overall grade (83.7) and PFF coverage grade (84.4) among the conference's 43 off-ball linebackers who have played at least 200 snaps on the year. He has contributed in all facets of the game for the 49ers, recording 14 quarterback pressures, 31 defensive stops and allowing a 53.6 passer rating when targeted.

Entering a Conference USA Championship bout against UAB, Leroy has been an instrumental part of the Atlantic Owls’ defense. He owns the best run-defense grade in the conference (85.0) as well as the second-best overall grade (82.6), just behind Gemmell’s. He has forced four fumbles on the year, most among all defenders in the conference, and he's recorded three interceptions which are tied for the most among linebackers.

Robertson currently leads all qualifying CUSA cornerbacks in overall grade (90.3) and coverage grade (91.3). He’s allowed just 41 receptions from 78 targets for 485 yards, 23 first downs and two touchdowns. He has more than made up for the yardage allowed, though, as he grabbed five interceptions and a nation-leading 17 pass breakups, showcasing his ability as a ballhawk.

Turner has allowed just 28 receptions from 53 targets for 276 yards, zero touchdowns and six first downs. He’s also recorded one interception and seven pass breakups on the season. He ranks second behind Robertson in overall grade (83.0).

The Hilltoppers have the best safety in the conference with Kincade. The junior owns the highest overall grade (89.1) and run-defense grade (91.1) at the position, while he also owns the second-highest coverage grade (83.3). Among qualifying safeties, Kincade has allowed the third-lowest passer rating when targeted (62.5).

Hall owns the highest coverage grade among all safeties in the Conference USA and the fourth-highest in the entire Group of Five. Across his 276 coverage snaps, the Panthers' star safety forfeited just one touchdown while snatching one interception and dropping another.

Ford-Dement holds the third-highest coverage grade among qualifying cornerbacks in the conference (82.8), as well as the third-lowest passer rating when targeted (51.3). In 342 snaps in coverage, he did not allow a single touchdown, while he also nabbed two interceptions and 11 pass breakups.

Hale made all 51 of his extra-point attempts and finished perfect from inside 40 yards on his field goals. He was 10-for-10 short of 40 yards and 5-of-8 from 50 or more yards out, including knocking home a season-long 50-yard field goal on his only attempt of 50 or more yards.

Leading the conference in overall grade, Haggerty averaged 42.7 net yards per punt while pinning opponents inside the 20-yard line on 16 occasions. He finished with an average hang time just around 4.00s flat, near the top of all Group of 5 punters, and in doing so, he gave his coverage unit ample time to limit return yardage.

Making waves with his speed, Adams was arguably one of the fastest players in the country in 2019, and he made multiple plays as a returner. He returned two kicks for touchdowns and averaged a whopping 31.6 yards per return, totaling 316 yards on just 10 kick return attempts, grading out with one of the highest kick-return grades in the country.

A threat to house any punt return, Keaton also possessed safe hands as he returned 15 punts for 183 yards and fair caught another 19 punts without a muffed attempt. He returned one for a score and saw by far the conference's best punt return average at 12.2 yards per return.