The dust has settled on the 2019 regular season at the FBS level and it's time to take a look back. Ahead of the Big 12 championship, we take a look at the best players at their respective positions with an in-depth look at how they graded over the course of the full season.

Utilizing our play-by-play grades of every player on every play of every game, our All-Big 12 team takes into account every player's actions on the field on Saturdays while also utilizing our wealth of signature statistics to determine the list. The strength of opponent and consistent play also factor into our selections detailed below. 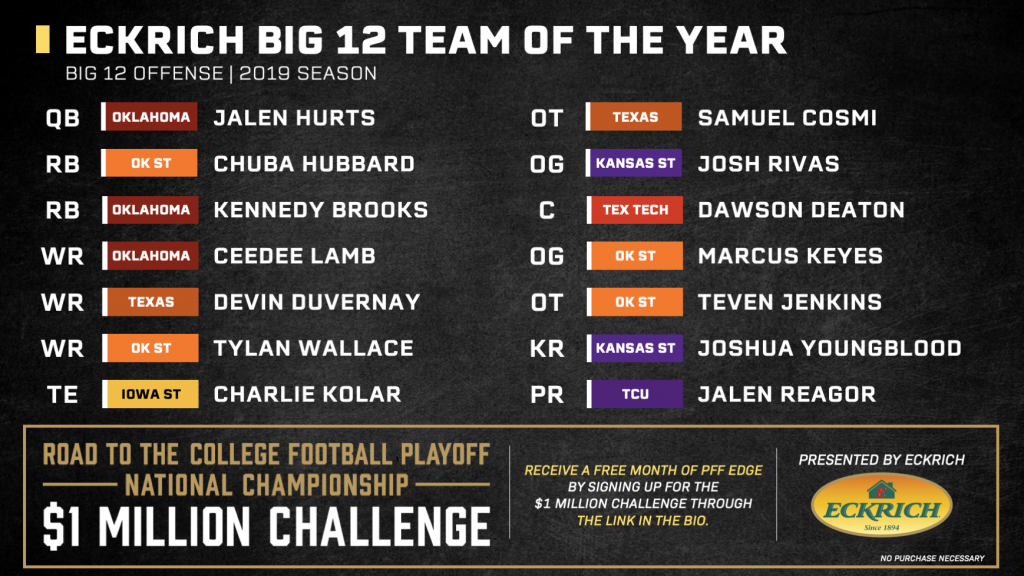 Hurts enters the Big 12 Championship against Baylor with the highest adjusted completion percentage (77.9%) and overall grade (91.6) of any quarterback in the conference. Though Sam Ehlinger and Jeff Duffey have higher PFF passing grades than Hurts, the Oklahoma signal-caller more than makes up for the deficit with his legs. Hurts currently ranks fourth in PFF rushing grade (82.6) and tied for fourth in forced missed tackles (44) among all Big 12 players with 100 or more carries.

Rushing for 1,932 yards and 21 touchdowns across 309 carries, Hubbard currently ranks first among all Big 12 running backs in overall grade (86.2). He’s also forced 70 missed tackles on the ground and totaled 1,185 yards after contact.

Hauling in 50-of-70 targets for 1,033 yards, 20 first downs and 14 touchdowns, Lamb has been an absolute monster this season. He enters the Big 12 Championship with the conference lead in yards per route run (3.81), yards after the catch per reception (11.1) and passer rating when targeted (147.3). He’s also dropped just two passes all season long.

Duvernay currently owns the highest overall grade (89.3) and receiving grade (89.4) of any Big 12 receivers with 200 or more offensive snaps played this season. He’s caught 102-of-125 targets for 1,300 yards, 57 first downs and eight touchdowns so far this season. He’s also dropped just three passes, hauled in 10-of-18 contested targets and forced a conference-high 23 missed tackles on the year.

Though his season was cut short due to injury, Wallace did enough earlier in the year to earn a spot on this list. The Oklahoma State wideout caught 53-of-87 targets for 903 yards, 25 first downs and eight touchdowns before being sidelined with a torn ACL. Among the 32 Big 12 receivers with 200 or more routes run so far this season, Wallace ranks second behind Lamb in yards per route run (3.51).

Keyes ranks second behind Rivas in overall grade (71.4) among all Big 12 guards with at least 300 offensive snaps played. He also ranks tied for fourth in pressure percentage allowed (2.7%) among qualifying guards, giving up just 11 total pressures across 409 pass-blocking snaps.

Jenkins hasn’t allowed a sack or hit all season long. He currently ranks first in pressure percentage allowed (2.0%) and pass-blocking efficiency (99.0) among qualifying Big 12 right tackles. He also leads the same group of qualifiers in overall grade (83.6) and run-blocking grade (81.8). 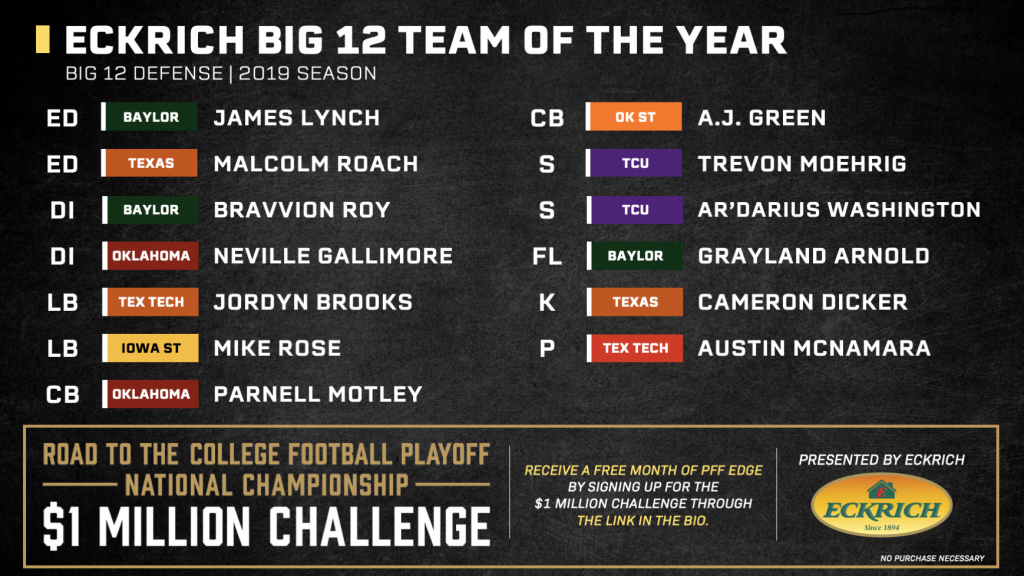 Lynch has recorded the second-best PFF pass-rushing grade (82.1) and overall grade (81.6) among qualifying Big 12 edge defenders so far this season, and he’s done so while playing more defensive snaps than any other player at his position. He also leads the Big 12 in total pressures (68) and defensive stops (32).

Roy enters the Big 12 Championship with the highest overall grade (89.9), run-defense grade (87.5) and pass-rush grade (85.8) among the 24 at his position in the conference with 200 or more defensive snaps played. He also ranks second among the same group of qualifiers in pass-rush win rate (14.4%) and total pressures (46).

Both Gallimore and Overton have been fantastic for Oklahoma this season. Gallimore gets the nod over his teammate with a better overall grade (89.1) and pass-rush grade (84.2). The Canadian-born big man has recorded 17 total pressures and the third-best pass-rush win rate in the conference (12%) entering the Big 12 Championship.

Brooks has been a game-changing, versatile piece of the Red Raiders’ defense this season. He’s earned 75.0-plus grades in run-defense (91.5) and as a pass-rusher (75.6) so far this season. He’s also earned an impressive 89.5 overall grade that leads all at his position in the conference with at least 300 defensive snaps played.

Rose currently ranks fourth in overall grade (73.7) and PFF coverage grade (76.5) among the 30 off-ball linebackers in the Big 12 that have played north of 200 defensive snaps on the year. He has also recorded 35 defensive stops and allowed just one touchdown in coverage.

Motley currently leads all Big 12 cornerbacks with 200 or more defensive snaps in overall grade (76.4) and coverage grade (77.5). He’s allowed just 20 receptions from 44 targets for 232 yards, 10 first downs and two touchdowns. He also ranks tied for 13th in the conference in forced incompletion percentage (22.7%).

Green has allowed just 32 receptions from 56 targets for 528 yards, one touchdown and 16 first downs. He’s also recorded nine forced incompletions so far this season. He ranks second behind Motley in the Big 12 in overall grade (75.8).

Moehrig is easily the best defensive player in the Big 12 right now. He leads all Big 12 defenders and all safeties in college football in overall grade (92.4) and coverage grade (92.8).

Moehrig isn’t the only TCU safety balling out this season. Washington ranks second behind Moehrig in overall grade (91.4) and PFF coverage grade (91.8). Washington has allowed just five receptions for 65 yards across his 250 coverage snaps this season, and he’s also logged five interceptions, to boot.

Arnold enters the Big 12 Championship ranked fourth among all of the conference’s defenders with a 100 more coverage snaps this season in PFF coverage grade. The Baylor safety has also logged six interceptions and another two forced incompletions this season.