The dust has settled on the 2019 regular season at the FBS level and it's time to take a look back. Ahead of the AAC championship, we take a look at the best players at their respective positions with an in-depth look at how they graded over the course of the full season.

Utilizing our play-by-play grades of every player on every play of every game, our All-AAC Team takes into account every player's actions on the field on Saturdays while also utilizing our wealth of signature statistics to determine the list. The strength of opponent and consistent play also factor into our selections detailed below. 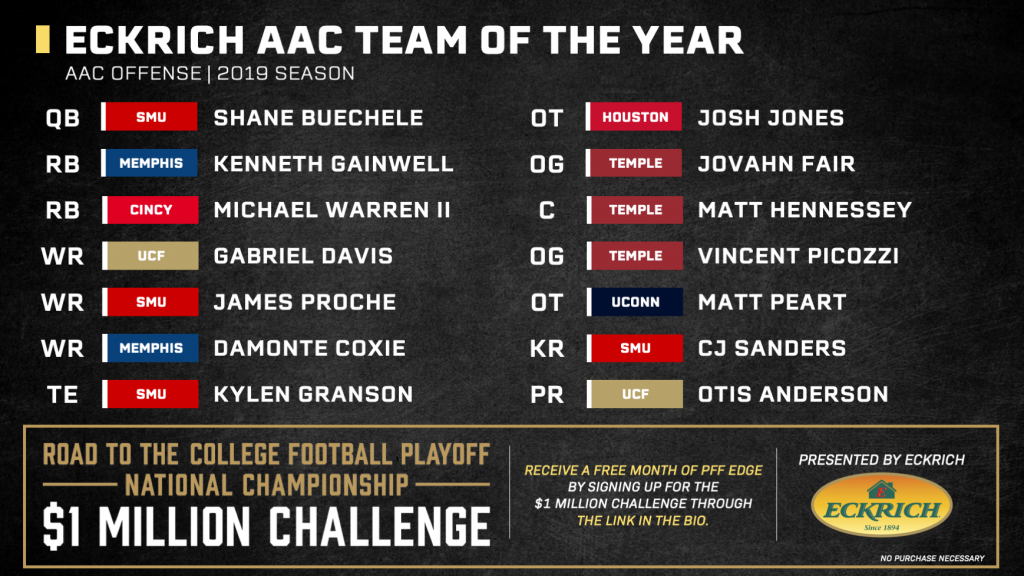 Buechele looked every bit the part of a former Power-5 transfer quarterback in his first season with the Mustangs. He dropped 33 touchdowns against just nine interceptions, and despite 18 dropped passes, 20 passes intentionally thrown away and a few more thrown as he was hit, his completion percentage of 63.1% was the second-best in the conference. In fact, his adjusted completion percentage of 71.8% indicates just how accurate he was over his 444 attempts. He was as exciting as they come at the quarterback position, and he led the entire country with a whopping 1,462 yards on deep passes, those targeted at least 20 yards downfield.

The Tigers saw incredible production from their lead back in Gainwell as he totaled 1,386 rushing yards, including 737 yards after contact. He ripped off a conference-high 35 runs of at least 10 yards and scored 12 touchdowns with another 45 first downs on the ground. His 50 broken tackles are second in the AAC and he chipped in with another 492 yards through the air with three scores and another 16 missed tackles forced.

Davis was every bit of a breakout player in 2019, earning a nod as a Third-Team All-American on our national list after hauling in 72 catches for 1,241 yards and 12 scores. He averaged 17.2 yards per reception and gained 334 of his yards after the catch while breaking 10 tackles in the process. It didn't matter which route, where on the field or, even at the beginning stages, which quarterback was throwing him the ball, Davis simply impressed all year long.

Proche set all sorts of SMU records this season as he hauled in 102 receptions for 1,151 yards and a conference-best 14 touchdowns. He benefitted greatly from Buechele's downfield throwing ability but really thrived greatly over the middle of the field, where he hauled in 49 of his catches from the slot alignment. His eight touchdowns from the slot were the most in the conference and his 2019 highlight-reel is as good as anyone in the country, including his triple-overtime game-winning reception to beat Tulsa.

Coxie leads the charge for the Tigers on the outside, as he was targeted 22.6% of the time on deep passes outside, finishing with the AAC's second-highest catch rate on such passes, hauling in 11 of the 12 catchable targets thrown his way on deep shots. For the year, Coxie averaged 16.8 yards per reception, totaling 990 yards on 59 catches with nine touchdowns and 31 more first-down receptions. He led the conference with 13 broken tackles and averaged a healthy 5.2 yards after the catch per reception.

A touchdown machine, Granson hauled in nine scores and moved the chains on another 19 receptions as his 28 combined receiving conversions led the conference by a comfortable margin. He rattled off 628 yards on 36 catches and also led the conference with 263 yards after the catch and five broken tackles. Continuing the trend, his 138.0 passer rating when targeted was also the highest figure for a tight end in the AAC.

In what almost became a throwaway year for the Cougars, Jones was a glaring bright spot in Houston. In his nine games, he was the highest-graded Houston player in all but one of them (D'Eriq King's final game) as Jones allowed just four total pressures on 325 pass-blocking snaps. He finished second in run-blocking grade and second in overall grade, dominating any defensive linemen placed in front of him.

An underrated aspect of any left tackle's repertoire is reliability, and Jones was only penalized twice all season long. He capped the 2019 year with elite grades across the board as he most certainly made huge strides on everyone's 2020 NFL Draft rankings.

Fair was the only AAC guard to finish the 2019 regular season with an elite pass-blocking grade, finishing with just eight total pressures allowed on a whopping 439 pass-blocking snaps. His play in the run game was solid for Temple all year long, but he stole the show with his prowess in pass protection.

Hennessy was one of the nation's top-graded centers this season and finished with the AAC's top individual grades in pass-blocking, run-blocking and overall. He allowed just four total pressures on 454 snaps in pass protection while finishing with an elite 86.9 run-blocking grade.

When in the lineup, Picozzi gave Temple perhaps the nation's best interior trio of linemen, logging 669 snaps over nine games. He finished with the conference's best overall grade and second-highest run-blocking grade, as he was just dominant up front.

Peart was the only other AAC tackle to finish with elite grades overall, as he was equally as dominant over the course of 12 games for the Huskies. He allowed 10 total pressures on the year across 415 pass-blocking snaps and had an 88.0 run-blocking grade that was by far the second-highest in the conference. 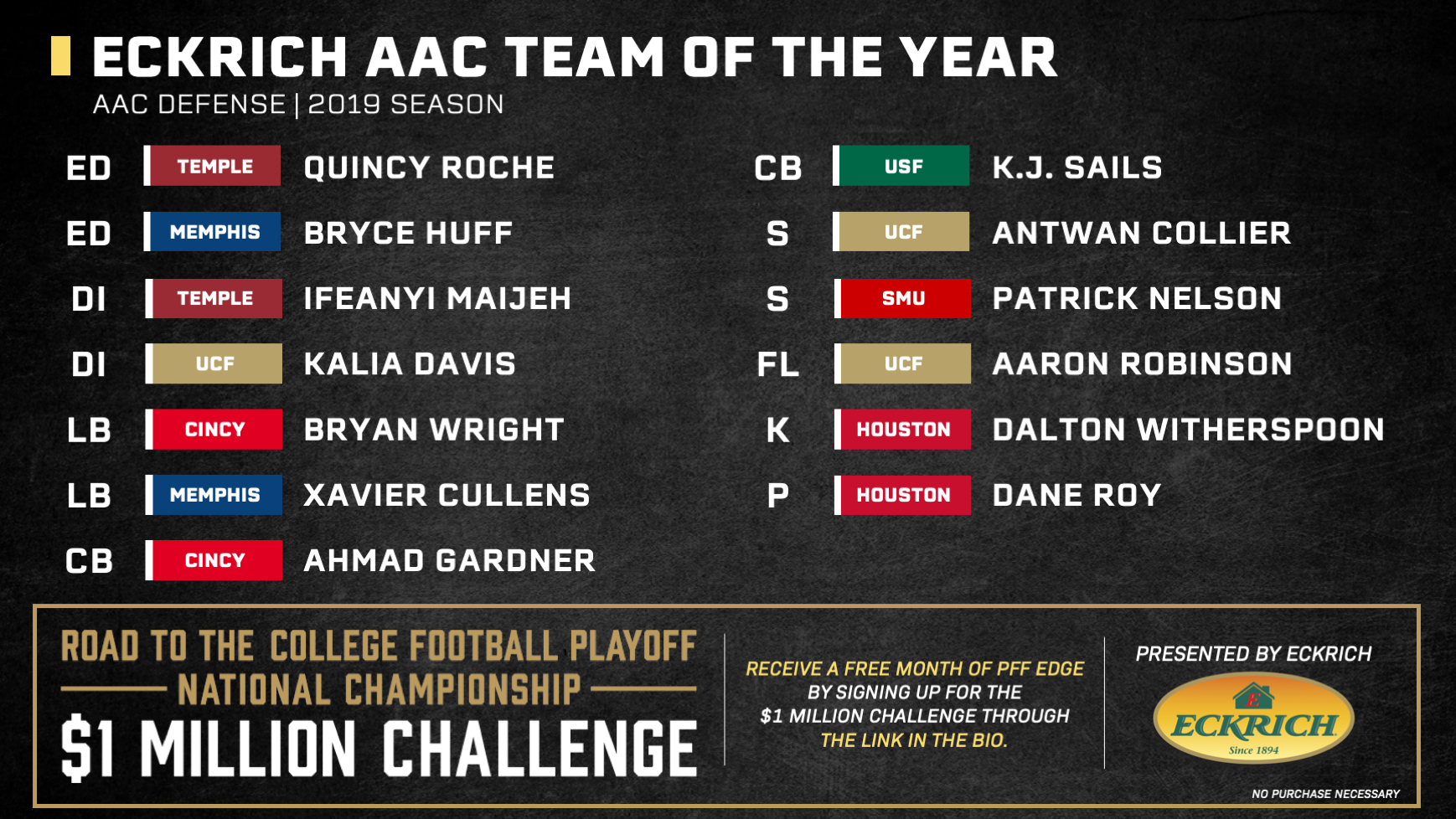 The nation's leader in total QB pressures this season, Roche recorded a whopping 67 on his 364 pass-rushes. He recorded the pass-rush triple-double in which he had 13 sacks, 13 QB hits and 41 QB hurries, winning his pass-rushes at an absurd rate. With four passes batted at the line of scrimmage, he finished third behind only Chase Young and Chris Rumph in pass-rushing grade among all FBS edge defenders.

Huff was the AAC's second-best pass-rusher behind only Roche in total pressures and pass-rush grade. He brought down 54 total pressures, including seven sacks and 12 more QB hits to go with his 35 total hurries. His 24 defensive stops saw 17 of them come against the run, and he did so by limiting missed tackles very well. Huff obtained an elite grade when rushing the passer and overall for the season, as he was one of just four edge defenders in the conference to finish with elite grades in both.

An almost unblockable force, Maijeh racked up 34 total QB pressures, including seven sacks, eight QB hits and 19 more pressures up the middle. His 34 defensive stops tied for the most among interior defensive linemen in the conference as he moved terrifically well for a man his size. He made 34 solo tackles, as well, and he chipped in with a batted pass at the line and a fumble forced to round out his season.

Davis racked up 23 total pressures on just 183 pass-rush attempts this season, bringing down four sacks with another two QB hits, as he was a tough dude for any offensive lineman to block. He recorded 17 defensive stops, 13 of which came against the run, as he was one of the AAC's best run defenders whenever he was on the field.

A true three-down threat, Wright was the only AAC linebacker to log at least 100 snaps against the run, in coverage and as a blitzer. He brought down a ridiculous set of production numbers in each category, as well, finishing with 24 total pressures to lead the league's linebackers, 38 total defensive stops and 63 solo tackles and limiting receivers to just 73 yards in his coverage. He didn't allow a touchdown and gave up just 55 yards after the catch all year long, as he was stalwart in all three facets.

Cullens led all AAC linebackers in overall grade, run-defense grade and tackling grade as he missed just two total tackles on 52 attempts. He was terrific against the run and great against the pass, as well, allowing fewer than 1.0 yard per snap he spent in coverage and racking up an interception with two more pass breakups on just 15 targets as the primary coverage defender.

Sails was regularly tasked with guarding the opposing team's No. 1 wide receiver and was targeted 46 times in the process. While he did allow 28 receptions on the year, he wasn't beat for a pass longer than 35 yards and made twice as many plays on the ball as he allowed touchdowns, with three interceptions and another five pass breakups with two more forced incompletions due to tight coverage to his credit. He led the conference in run-defense grade and missed just four of the 46 total tackle attempts on the year as he was a dominant player on the outside for the Bulls' defense.

The highest-graded cornerback in the country for some time, Gardner finished as the sixth-highest-graded cornerback in the regular season among all FBS corners. He was targeted 43 times yet allowed just 17 receptions for all of 230 yards. He didn't allow a touchdown all year long and had three interceptions with another five pass breakups to see only a 28.2 passer rating on throws into his coverage. For context, a quarterback receives a 39.6 passer rating by just throwing the pass into the ground every time, meaning quarterbacks were statistically better by just simply avoiding Gardner's coverage.

Collier was dominant across all levels, but coverage is where he shined for the Knights in 2019. He was the primary coverage defender on 24 targeted passes and didn't allow a reception longer than 29 yards. He intercepted three passes and broke up three more, chipping in with another 51 solo tackles and 25 defensive stops all over the field.

Nelson jumps off the page whenever the Mustangs take the field, as he is perhaps one of the nation's best blitzing defensive backs since Derwin James patrolled the field for FSU. Nelson racked up a whopping 32 total pressures on just 82 blitzes, recording 13 sacks, six QB hits and 13 more hurries along the way. When he did drop back in coverage, he was also effective, bringing in an interception and another pass breakup while he made 46 total defensive stops. Against the run, Nelson finished second in the conference among safeties with a 7.4% run-stop percentage, making 27 total run stops on 366 snaps against the run.

Robinson made major plays on the ball all season long, racking up 10 total interceptions and pass breakups combined. He allowed just 56.0% of the passes thrown into his coverage to be caught and allowed a conference-best 8.3 yards per reception with 21 defensive stops to his credit. He didn't allow a reception longer than 32 yards and saw just a 49.7 passer rating when he was the primary coverage defender in 2019.

Witherspoon knocked home all 40 of his extra points this season and made 20 of his 24 field goals in 2019. He was terrific from long distance, knocking home 6-of-8 from 40 or more yards out while also adding value as a kickoff man in games.

Roy's net punt average was the best in the conference, and he led the AAC with 35 punts pinned inside the opponent's 20-yard line. He knocked 54 punts for 2,529 yards, allowing just 151 return yards and averaging a hangtime of 3.21 this year.

Sanders was electric this season for the Mustangs, returning 29 kicks for 824 yards and leading the way with two kick-return touchdowns. His 100-yard long obviously topped the conference, but he also averaged 28.4 yards per return, by far the highest among returners with at least 20 attempts.

Anderson is perhaps one of the fastest players in America, and he utilized that on punt returns, including an 87-yard long for a touchdown. Anderson totaled 254 yards and an average of 14.9 yards per return while securing 26 fair catches.