The Week 4 Eckrich SEC Team of the Week powered by PFF saw some impressive performances and, of course, the strength of opponent also factored into the overall selections as did the PFF player grades. 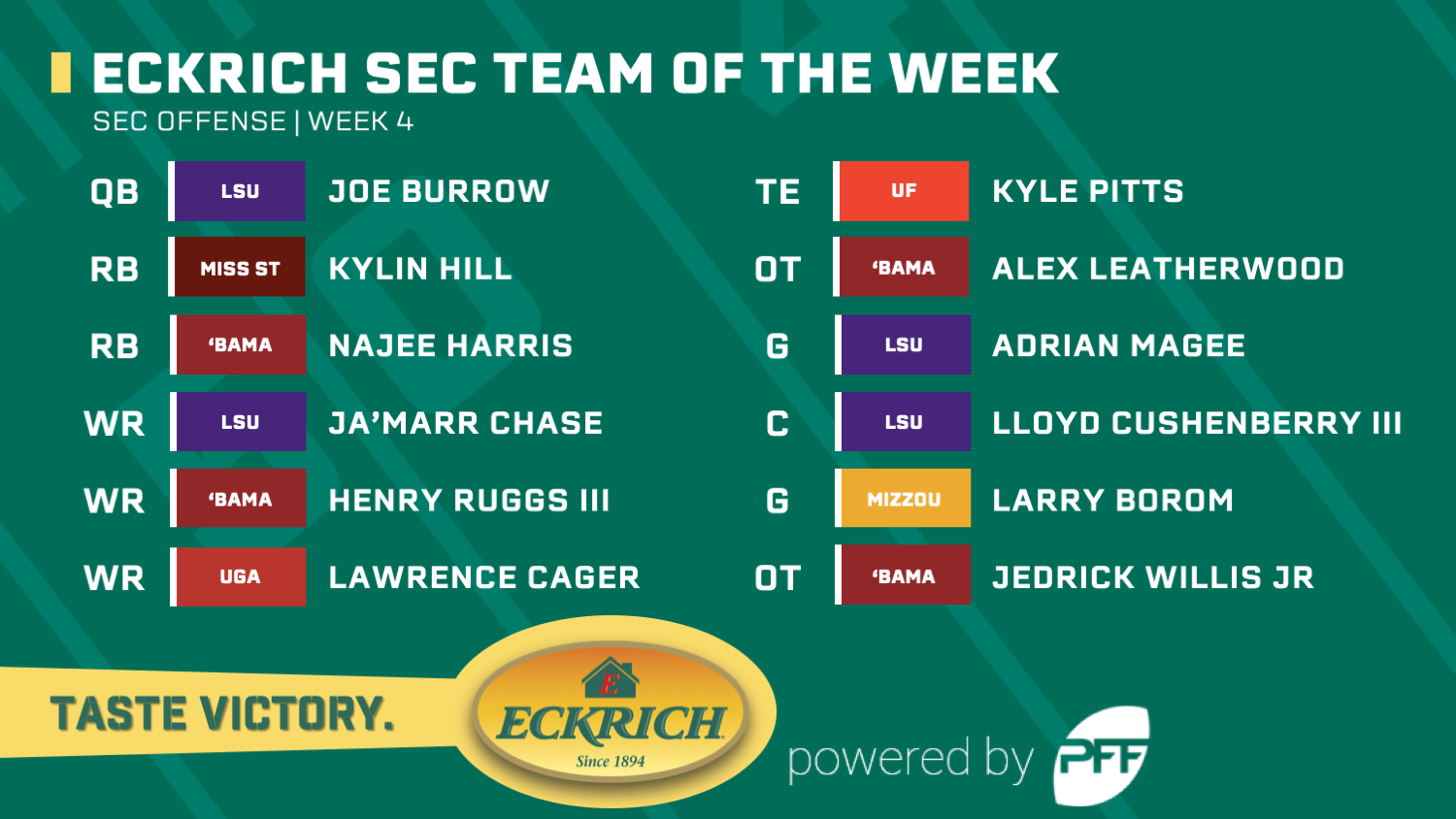 Burrow continued his ridiculous start to the season with a six-touchdown performance against Vanderbilt. He excelled throwing the ball downfield, going 4-for-7 for 99 yards and two touchdowns on throws 20-plus yards downfield.

Hill saw 25 carries on Saturday, picking up 120 yards in the process. He averaged 2.36 yards after contact per carry and forced three missed tackles, helping Mississippi State to a win over Kentucky.

Harris saw only 13 carries in Alabama’s blowout win but was still able to average 7.2 yards per carry, with 3.85 of those yards coming after contact. He also racked up seven missed tackles forced — an incredible missed tackle rate from such a small number of carries.

Chase was dominant in LSU's victory over Vanderbilt, grabbing 10 balls for 229 yards and a whopping four touchdowns. He was targeted heavily outside the numbers and turned out the Power-5's top yards after the catch mark with 117 of his 229 receiving yards coming after the reception. He forced three missed tackles and saw a perfect passer rating of 158.3 when targeted.

Ruggs delivered with 148 yards for Alabama on Saturday, coming on just four receptions for a 24.8 yards per catch average. Two of those went for touchdowns, while the other two went for first downs.

In a big game against Notre Dame on Saturday night, Cager's impact was felt as the Bulldogs underlined their College Football Playoff potential. He didn’t force any missed tackles, but three of his receptions went for a first down and another for a touchdown.

Pitts turned in four receptions for 62 yards and a score as all four of his receptions converted. He recorded three first-down receptions and saw a perfect passer rating of 158.3 when targeted.

Leatherwood allowed just a single quarterback hurry and had the nation's fourth-highest run-blocking grade on Saturday, paving the way for many lanes opposite OT Jedrick Wills as the duo formed quite the pairing on the outside for the Crimson Tide.

This needs no writing:

Get you some Adrian Magee!

Joining Magee on the interior offensive line is teammate Lloyd Cushenberry III. From 39 pass-blocking snaps, he allowed just one hurry, with no sacks or hits on those plays. He didn’t dominate as a run blocker, but he certainly didn’t struggle either.

Parker wasn’t great as a pass-blocker for the Bulldogs in their win over Kentucky, allowing a sack, with no hits or hurries from 18 pass-blocking snaps. He was far more impressive as a run blocker, though, helping clear the way for Kylin Hill.

Willis joins his teammate Alex Leatherwood on the SEC Team of the Week with an impressive performance. From 27 pass-blocking snaps, he allowed just one hurry and made some impressive blocks in the running game. 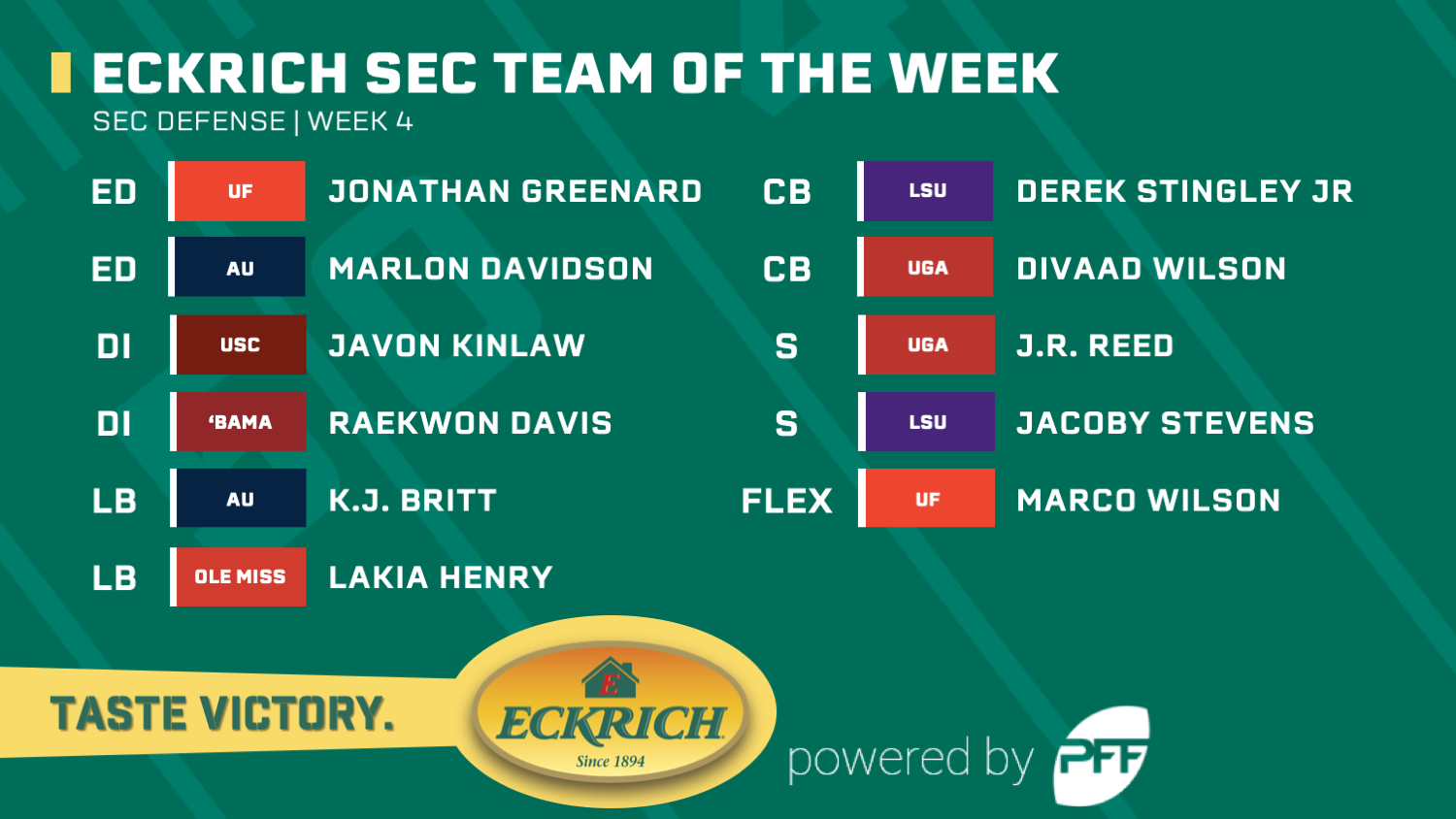 This was one of the most dominant performances of the weekend, with Greenard dominating the Tennessee offensive line. From 30 pass-rushing snaps, he racked up five hurries and added three batted passes, while two of his three tackles resulted in a defensive stop.

Davidson made life difficult for Texas A&M on Saturday, with two of his three tackles resulting in a defensive stop. As a pass-rusher, he registered three hurries from 45 pass-rushing snaps.

Rushing the passer in one of his finest performances to date, Kinlaw got home with six pressures, a sack, a QB hit and four additional hurries, leading to an elite pass-rush grade. He chipped in with two more run stops in an all-around strong performance for the interior defender.

Davis was a nightmare for Southern Miss to deal with up front, registering a hit and two hurries from 21 pass-rushing snaps on Saturday. He added some solid work against the run too, finishing the game with his lone tackle resulting in a defensive stop.

Britt had a really nice game against Texas A&M, starting with the fact that he registered four solo tackles and two assists with no missed tackles. He allowed just one reception in coverage for four yards and finished the game with three tackles resulting in a defensive stop.

Henry dominated in the loss to Cal, finishing the game with six tackles resulting in a defensive stop. He didn’t allow any receptions in coverage or miss any of the nine solo tackles he attempted in the game.

Yet another big-time performance from the true freshman, Stingley was targeted nine times against Vanderbilt and allowed just four receptions. He came down with an impressive interception while breaking up three more passes for a passer rating of just 32.9 when targeted.

Wilson was targeted six times by Notre Dame on Saturday night and gave up just three receptions for 22 yards. He also had an interception and a pass breakup, finishing the game having allowed an NFL passer rating of just 19.4 on throws into his coverage.

Reed made perhaps the game's most pivotal play when he intercepted Notre Dame QB Ian Book on a flea-flicker pass in the fourth quarter to all but seal the deal. Still, he was effective through all four quarters. For the game, Reed was targeted five times and allowed just two receptions for 18 yards as the primary coverage defender.

Stevens was all over the field on Saturday, finishing the game with one solo tackle, three assists and no missed tackles. In coverage, he allowed two receptions from three targets and came away with an interception and pass breakup.

Wilson was targeted five times by Tennessee and allowed bagels across the board. Zero receptions, zero yards and an NFL passer rating of 0.0. The cherry on the cake was the fact that he added an interception and pass breakup.