After grading and analyzing every player on every play of every game during the 2018 college football season, it’s time we unveil the 2019 Preseason PFF All-Big 12 first team, second team and honorable mention for every position on offense and defense as well as for the first time ever, specialists.

The Preseason All-Big 12 list may differ a bit from any year-end look back at the previous season as we project to the 2019 season ahead of us. Find out which of these athletes made the PFF All-American team as well. 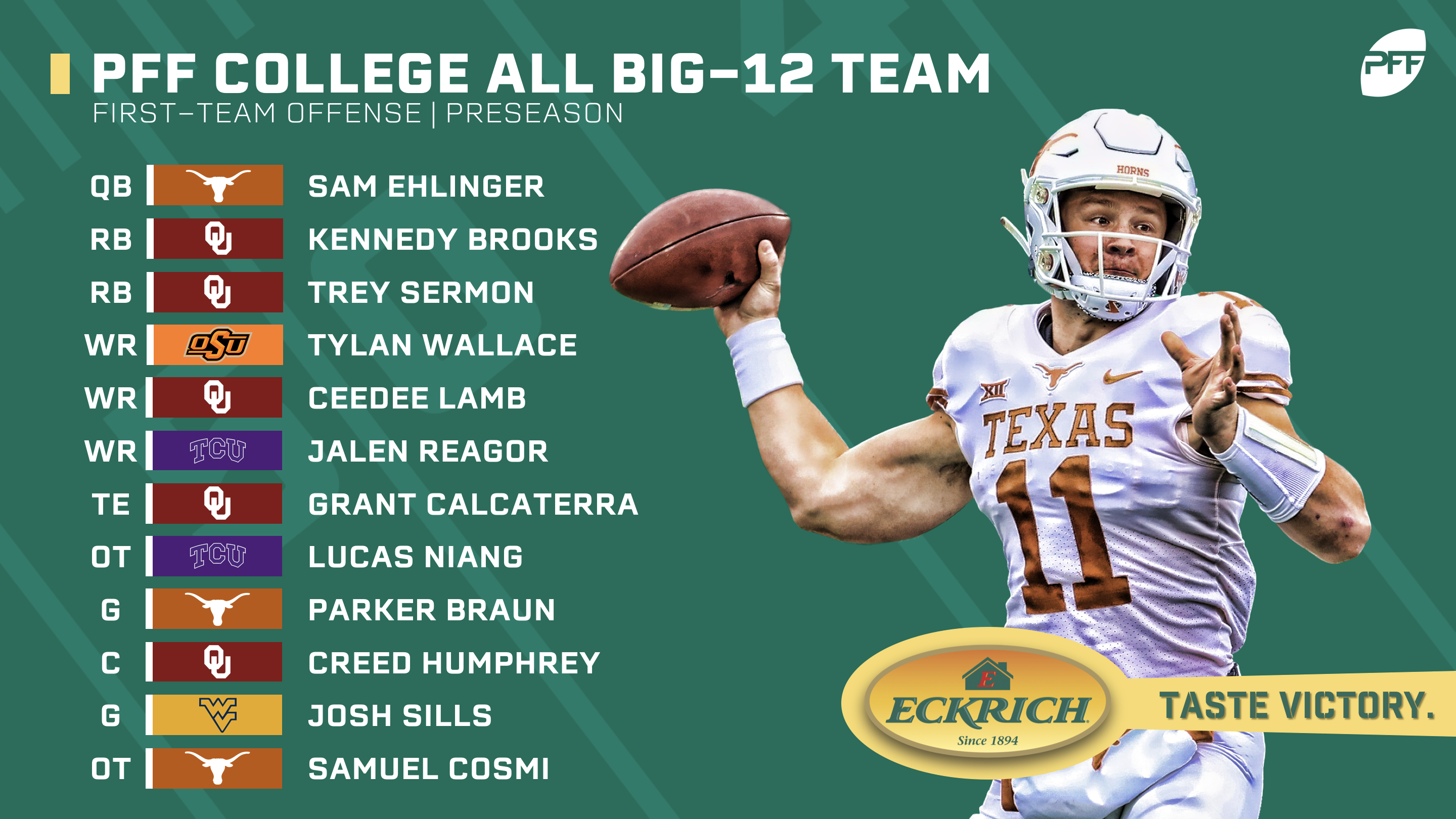 Brooks is the cream of the crop when it comes to yards per attempt, averaging a ridiculous 8.8 yards per carry a season ago.

Making people miss comes easy to Sermon as he forced 57 missed tackles a year ago, ranking third among Power-5 running backs. The two guys above him each had 300 or more carries compared to Sermon's 162.

No receiver hauled in more contested catches a season ago than Wallace, as his 22 dominated college football. His 37 explosive plays of at least 15 yards also leads active receivers.

Despite a heavy target share, Lamb only dropped nine of the 120 catchable passes thrown his way while averaging a ridiculous 12.7 yards per target.

A true deep threat, Reagor is expected to breakout with more plus-grades from his quarterback this season. He's a threat with the ball in his hands, just needs it more.

Of his 26 receptions a season ago, 19 of them moved the chains or scored a touchdown as Calcaterra is a conversion machine in the Sooners offense.

Niang did not allow a sack all season and holds the Power-5's fourth-highest pass-blocking grade among active tackles.

Coming from Georgia Tech, it's no shock that Braun is a staunch run blocker. His run-blocking grade will carry him as he adjusts to the Longhorns gameplan but he's got all the tools to succeed in their offense.

Owner of the Power-5's second-highest overall grade and third-highest pass-blocking grade, Humphrey is as NFL ready as they come at center.

Sills holds top-third marks in both pass protection and run blocking among all Power-5 guards entering the 2019 season.

Playing more snaps than any returning Power-5 tackle, Cosmi was terrific a year ago, both in pass protection and with his run blocking. He'll be a dominant force for years to come in Austin. 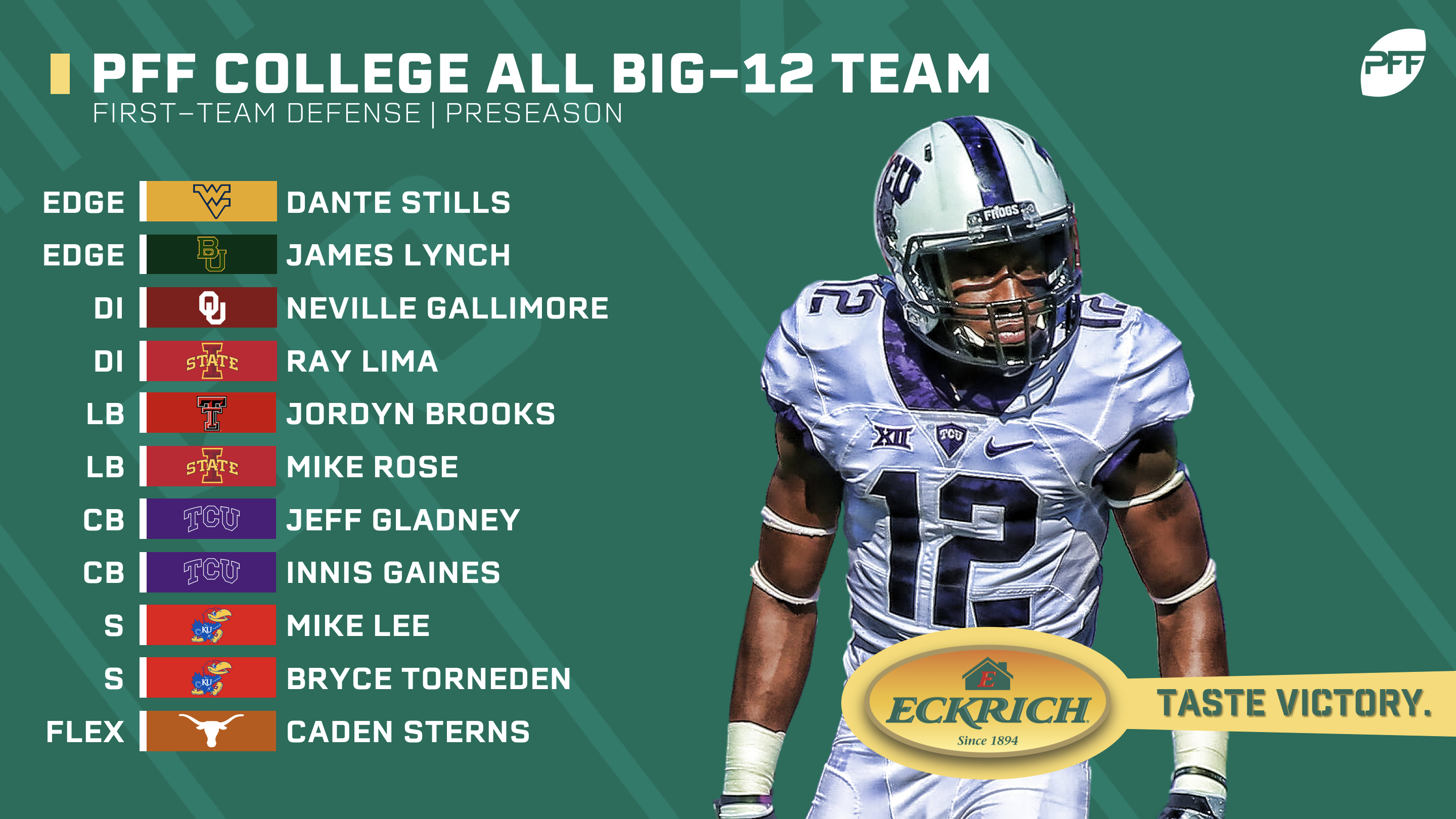 Stills was as staunch a run defender along the edge as they came last year, finishing with the third-highest run-defense grade among active Power-5 edge defenders.

With double-digit hit totals to his name, Lynch is ready to take that next step as a pass-rusher while he's a great run defender already, that pass-rush is trending in the right direction.

Gallimore returns with 24 total QB pressures from last season and 46 total for his career as he's improved his pass-rush and overall grades in each of the past three seasons.

A stout run defender, Lima has now made 29 defensive stops and 27 total pressures while improving all of his grades in each facet the past two seasons.

His strength is his tackling as he brought down 81 total tackles and just four missed attempts. Brooks' tackling grade ranks fifth among Power-5 linebackers.

Rose ended the 2018 season with 22 QB pressures to rank inside the top 10 among Power-5 linebackers returning to action this fall.

As stout a Big 12 cornerback as anyone will find this season, Gladney was targeted a whopping 71 times a year ago. He allowed just 27 of those to be caught in a breakout year last season.

The other half of perhaps the nation's best 1-2 CB combination, Gaines didn't allow a touchdown and recorded five total plays on the ball to see a lowly 37.7 passer rating when targeted.

Lee made 18 defensive stops and allowed just 43 yards after the catch in his primary coverage, seeing plus grades all over the field.

While his coverage and run defense were both strong, Torneden's pass-rush sets him apart among Power-5 safeties. He recorded nine total pressures, fourth-most among P5 safeties, and did so on just 22 blitz attempts.

Sterns was terrific in coverage as the primary defender. He was targeted 28 times, allowed 15 receptions while intercepting three and breaking up another four.

Dicker the Kicker has already made Texas folklore in his lone season with the Longhorns, nailing home the game-winner against Oklahoma last year and he's a finalist for the Groze for a reason.

Of his 53 punts last year, 25 of them were downed inside the opponent's 20-yardline as he averaged a healthy 38.2 net yards per punt.