• Dolphins QB situation continues driving the early-week line movement, which now has Minnesota as a field-goal favorite on the road.

• With everything pointing toward Cleveland, this looks like a great spot to lock in Browns -3 vs. Patriots.

Let’s start by checking where the current Week 6 spreads were at critical points in the past.

Another valuable datapoint often is the injury situation for all teams. One of the best ways to find value early in the week is digesting injury information quicker and more accurately than the rest of the market. This can be done by understanding which key guys are returning, as well as who was injured in the previous game but won't be added to the official game status for a team until later in the week.

To start, let's take a look at the Week 5 injury information for every team and what it means for their Week 6 outlook. 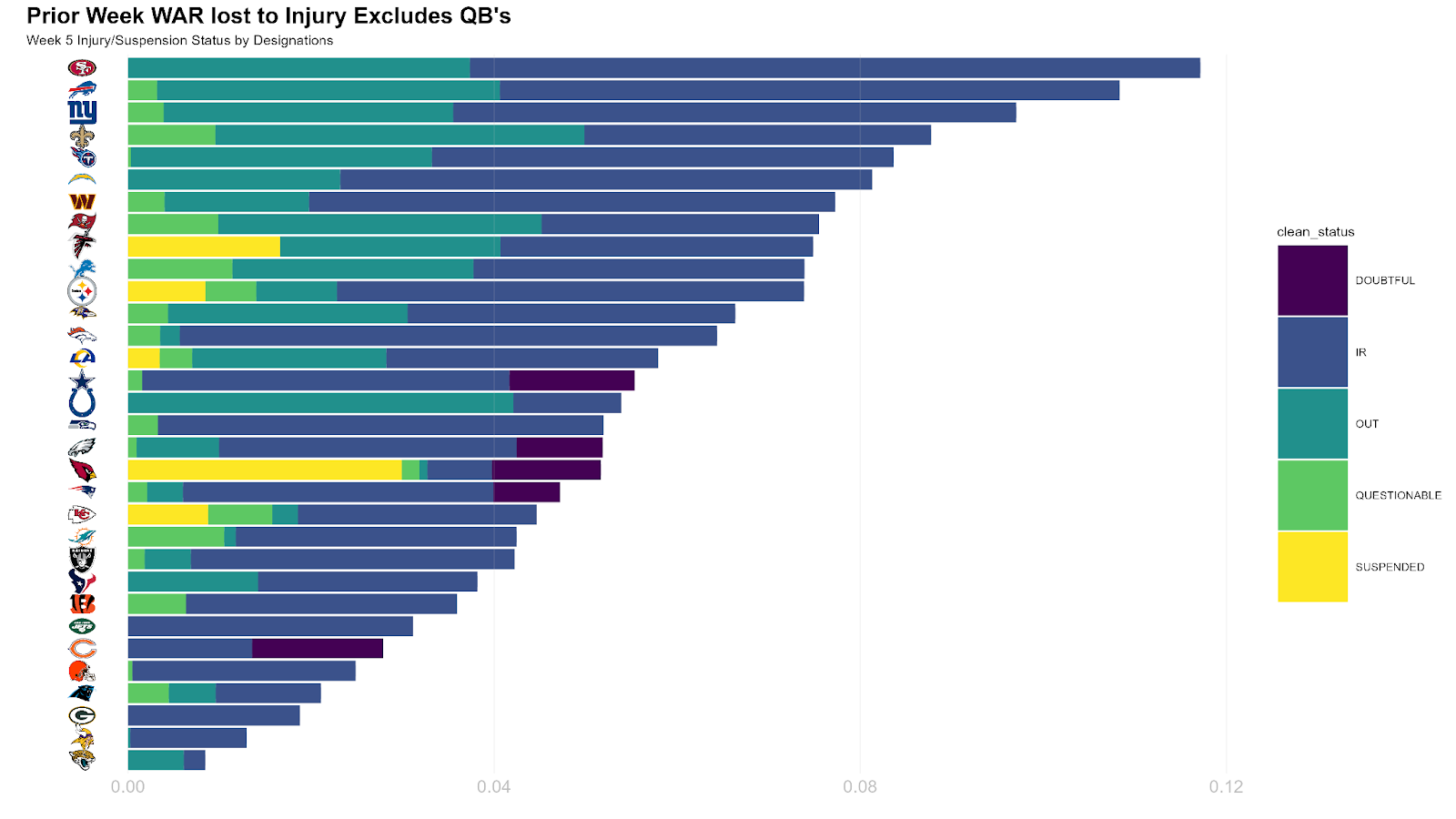 There are also a few injury situations that happened Sunday and Monday that are relevant from a health perspective and could impact game spreads if players miss time. Checking out Mario Pilato’s fantastic injury roundup is a great way to get ahead of the injury news that will drive movement in the spread, moneyline and totals markets in Week 6.

Let’s dive into the games whose lines already have moved and others that could have the most spread movement as we head closer to kickoff.

• This spread flipped on the threes from a preseason number of Dolphins -3: And Miami very much looked the part of a playoff team before succumbing to multiple QB injuries. That situation continues driving the early-week line movement, which now has Minnesota as a field-goal favorite on the road.

• If third-string rookie quarterback Skylar Thompson is forced into his first-ever NFL start: This spread should move out even farther in the Vikings' direction. Additionally, Tyreek Hill is dealing with a lower-leg injury as well as the quad tweak he played through in Week 5. If Hill is not at full strength, it severely limits an offense that needs his game-breaking ability more than ever.

• Although the line movement has already been drastic in this matchup: If it moves off -3, expect it to be farther toward the Vikings.

• Packers are 7-point road favorites to an upstart New York team in a second consecutive week: And Zach Wilson is coming off his best passing performance as an NFL quarterback and finally has people excited about the Jets taking a potential leap in 2022.

• Bettors have taken notice as a -9 spread in the preseason is currently down to 7: With the majority of early cash and tickets taking the Jets as a road dog. Green Bay will once again be thin at wide receiver, but it’s really difficult to see this number move off of 7 in either direction. It looks like all the movement has already occurred on this spread, but the total could continue to gyrate as we head closer to kickoff.

• There seems to be little spread impact happening based on which quarterback is starting for the Patriots this week: There is a drop-off from Mac Jones to Bailey Zappe, but the market seems uninterested in moving this number off of -3.

• PFF sees two spread points separating this QB situation: But the impact of moving off the key number of 3 doesn’t offer a great comparison to a generic spread differential between players. The issue for the Patriots is they are banged-up at a number of offensive positions and must find a way to be efficient against a talented Browns defense that hasn't played near its potential. With everything pointing toward the Browns, this looks like a great spot to lock in even if we don’t see any movement off of -3.

• After being written off early by many following Dak Prescott's Week 1 thumb injury: The Cowboys did the unthinkable and rattled off four straight victories. They are very much in division contention with the only undefeated team left in football, and could dramatically help their case with an upset victory on Sunday night. Bettors are enthused to back a Cowboys team led by Cooper Rush, with the expectation that Dak Prescott sits until after their bye.