With eyes towards the 2018 NFL Draft, here are the players to keep your eyes on in the Valero Alamo Bowl. 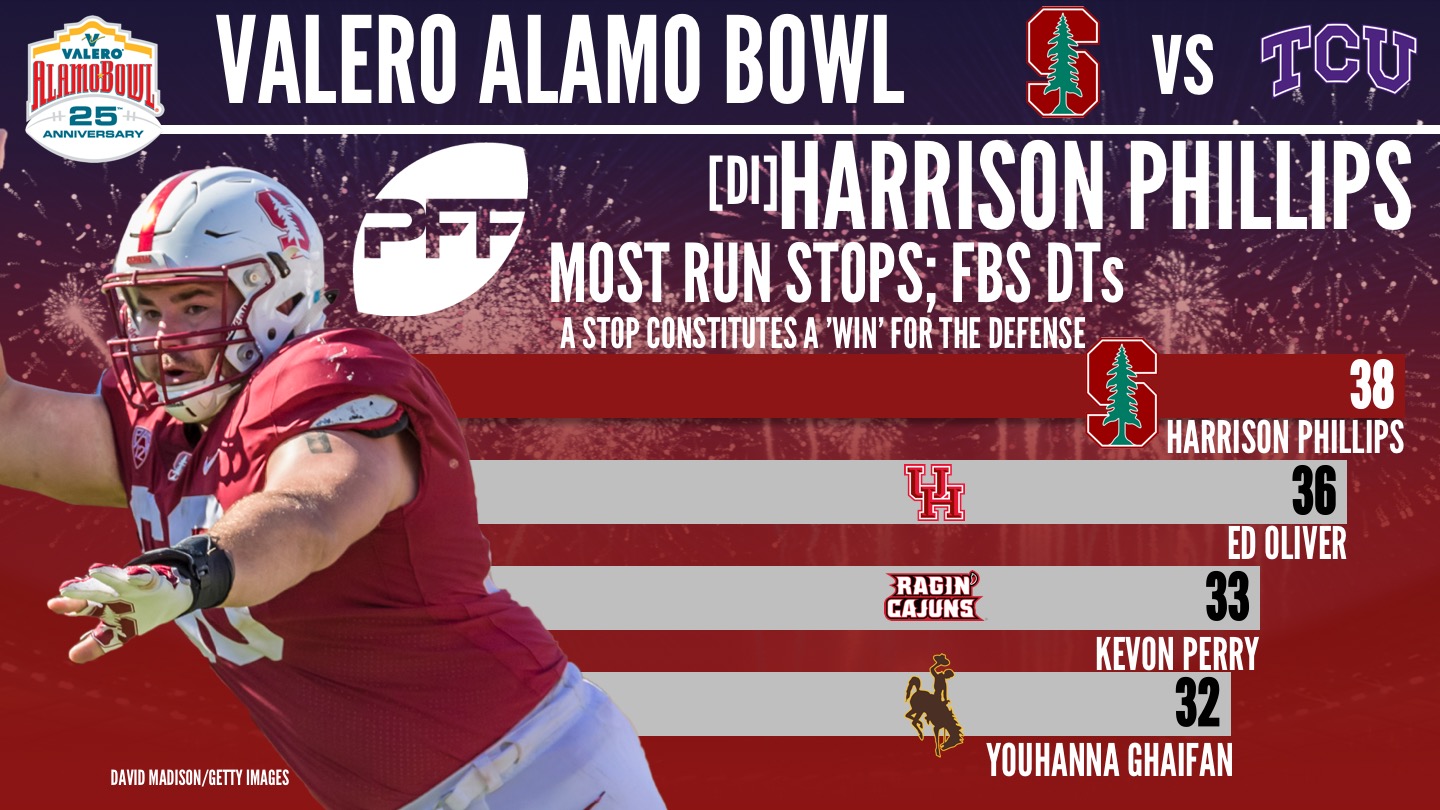 Harrison Phillips was arguably the nation's premier run-stopper this season. He has 38 run stops on the year which is first among all FBS defensive tackles while his run stop percentage of 12.9 ranks No. 2 among all FBS draft-eligible defensive tackles. Phillips can also push the bottom of the pocket on pass plays and has four sacks, six QB hits and 17 hurries on his 325 pass-rush snaps this season. – @PFF_Jordan 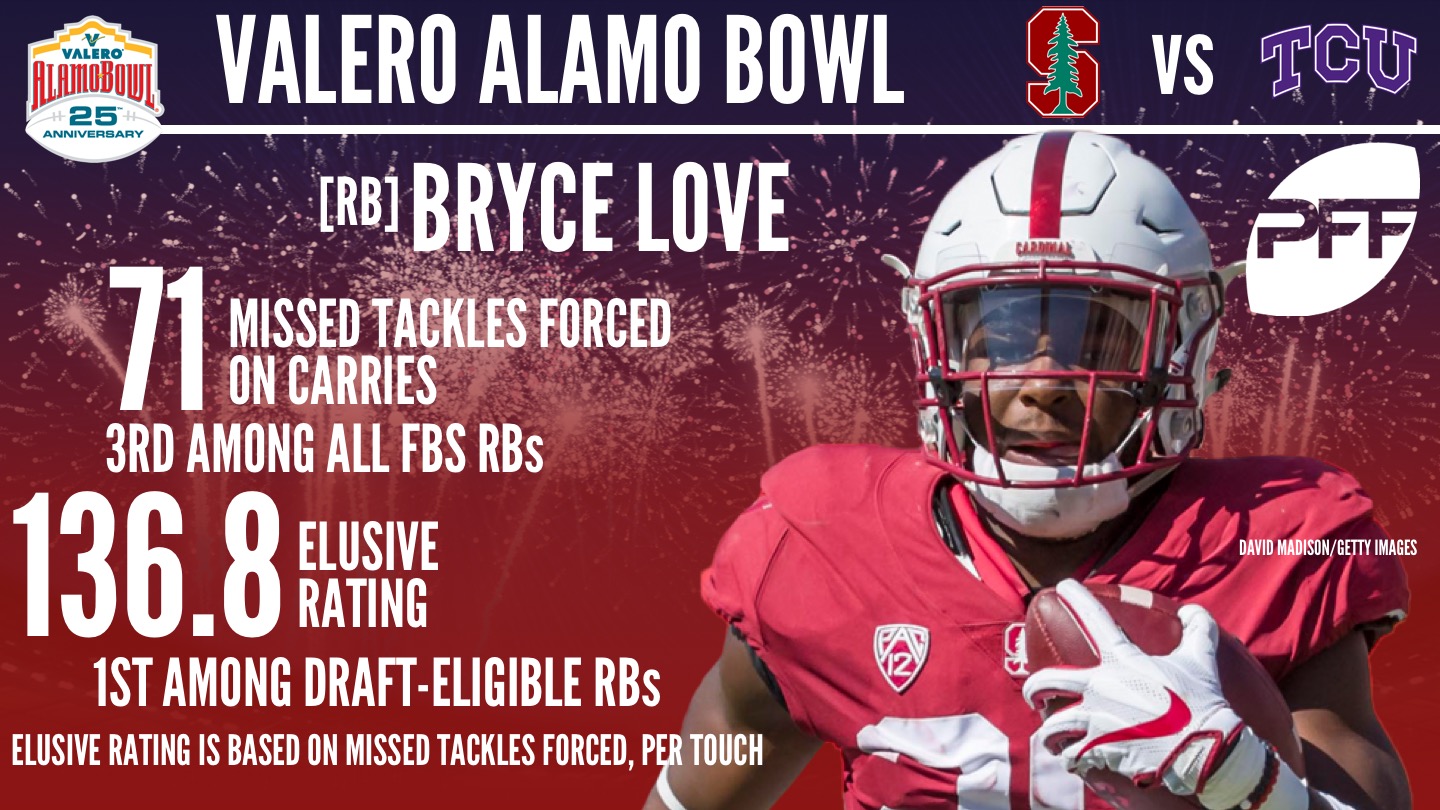 Our Steve Palazzolo had Bryce Love as his breakout RB candidate before the season and Love exceeded Steve’s prediction by making it all the way to the Heisman Trophy ceremony. Love’s yardage and touchdown numbers are well-known but two PFF signature stats that really capture Love’s impact on the game are his elusive rating and breakaway percentage.

His quickness and agility allowed him to force 70 missed tackles as a rusher this season and his elusive rating of 155.1 ranks No. 1 among all draft-eligible running backs. The deadly part of Love’s game is that he turns missed tackles into big plays with his speed as 67.5 percent of rushing yardage occurred on big plays of 15 yards or more. – @PFF_Jordan

Morris is likely an off-the-radar prospect at this stage, due to him missing six games with an undisclosed injury, but he's graded extremely well when on the field each of the past three years. In 753 pass-blocking reps at TCU, Morris did not surrender a single sack or a hit, and has been charged with just nine total pressures to his name. His 98.9 pass blocking efficiency rating (two hurries allowed on 140 reps) this year ranks 17th among all FBS centers with at least 100 snaps in pass protection, and his 83.9 overall grade ranks 13th among draft-eligible centers. – @PFF_Josh 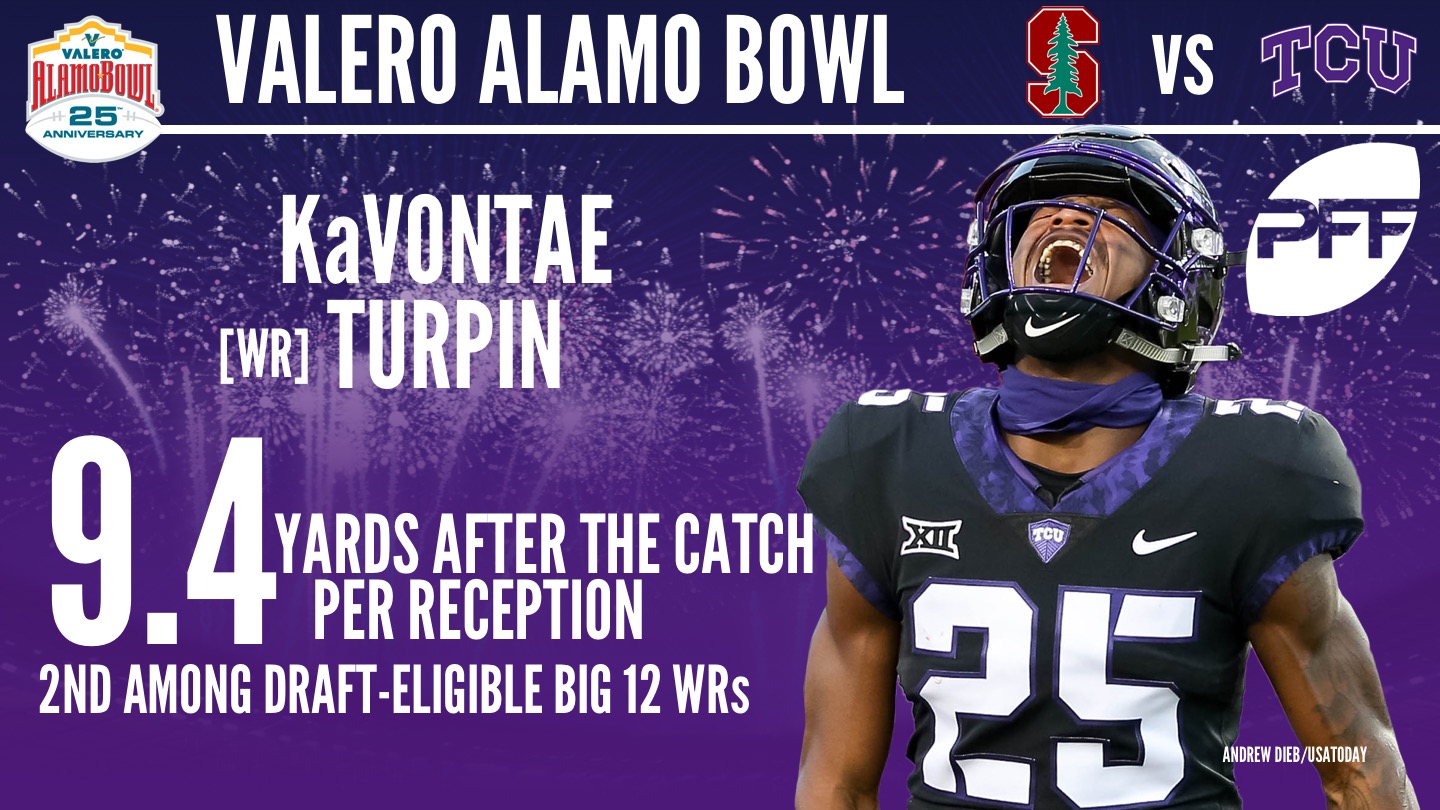 Listed at 5-foot-8, 160-pounds, Turpin obviously needs to add significant bulk to his frame before making the jump to the NFL, but his speed and explosiveness make him capable of changing games. His 9.4 yards after the catch average ranks No. 2 among Big 12 wide receiver prospects with at least 20 catches in 2017. – @PFF_Josh

After a torrid start to his first season with the Horned Frogs (he sat out 2016 after transferring from Louisiana-Monroe) that saw him accumulate nine sacks and eight quarterback hits through the first nine games, Banogu managed just two sacks and one hit in the final four. For the season, he tallied a total of 46 total pressures, as only Oklahoma in Week 11 was able to prevent him from notching multiple pressures in every single game. Perhaps the most impressive aspect of his game this year has been his run defense, as he raised his overall grade in the category from 44.3 in 2016 (with UL-Monroe) to 77.4 in 2017. – @PFF_Josh 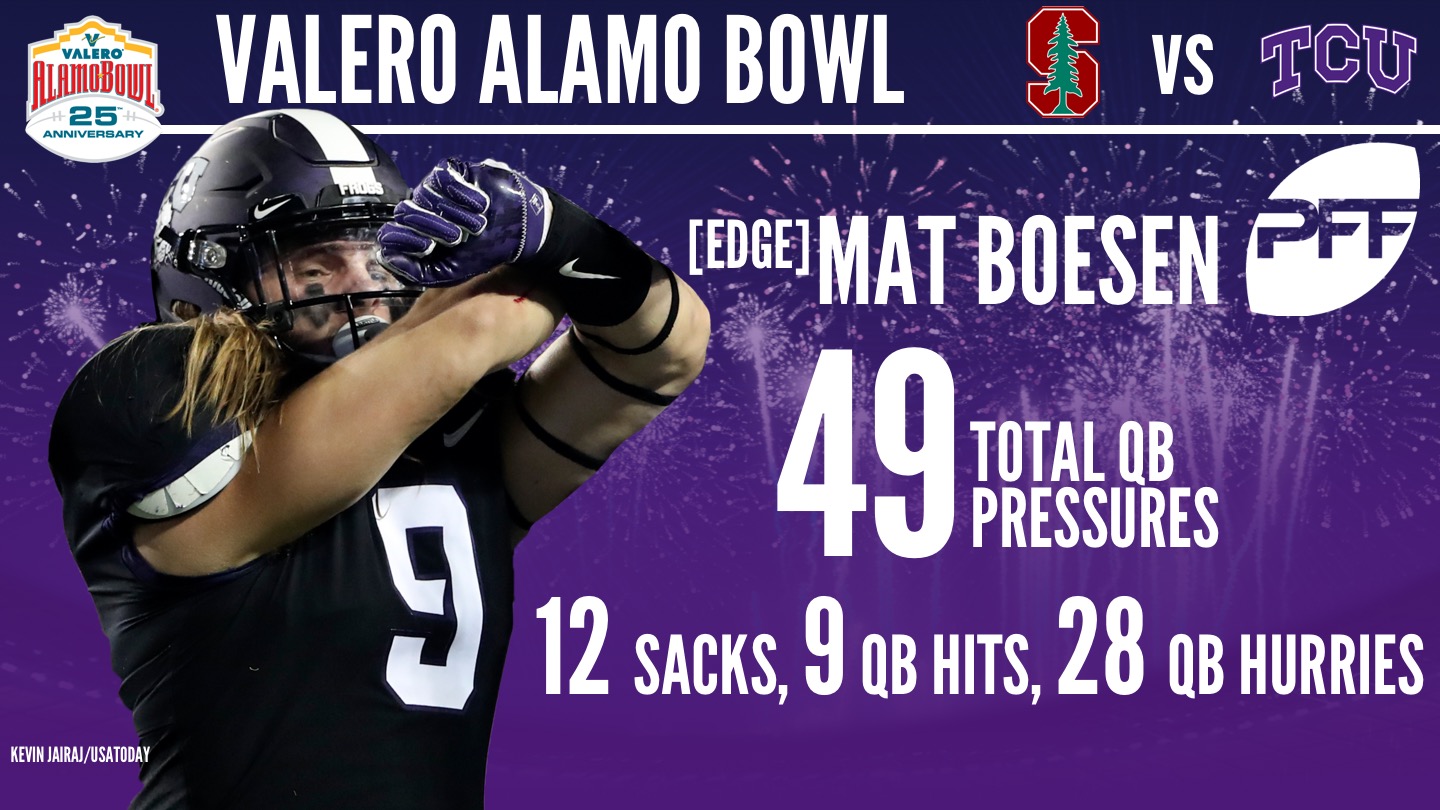 Boesen’s breakout senior season was capped by one of the top pass-rushing performances of the season, when he lit up Baylor in Week 13 for six sacks, three hits and 14 total pressures to go with eight total defensive stops. He led the Horned Frogs on the season with 49 total pressures, and his 84.3 run defense grade tied him for the top spot on the team. – @PFF_Josh

Summers played well in all three defensive phases this season, but it was his play in coverage that helped him stand out from the pack. He allowed just three receptions longer than six yards into his coverage, and opposing quarterbacks had a passer rating of just 49.5 when testing him. His 84.8 coverage grade ranks second among draft-eligible edge linebackers, and he also accumulated four sacks and eight total pressures on just 15 pass-rush reps over the last five games of the season. – @PFF_Josh

NFL teams will certainly have concern over his billed size at 5-foot-10, 176-pounds, but Texada has been a standout cover corner throughout his career at TCU. His senior season was certainly his best, as he allowed completions on just 47.3 percent of throws into his coverage in 2017, and gave up less than 40 yards receiving 10 times while posting 13 total pass defenses. His aggressiveness can get him into trouble at times, however, as he was flagged eight times this past year. – @PFF_Josh 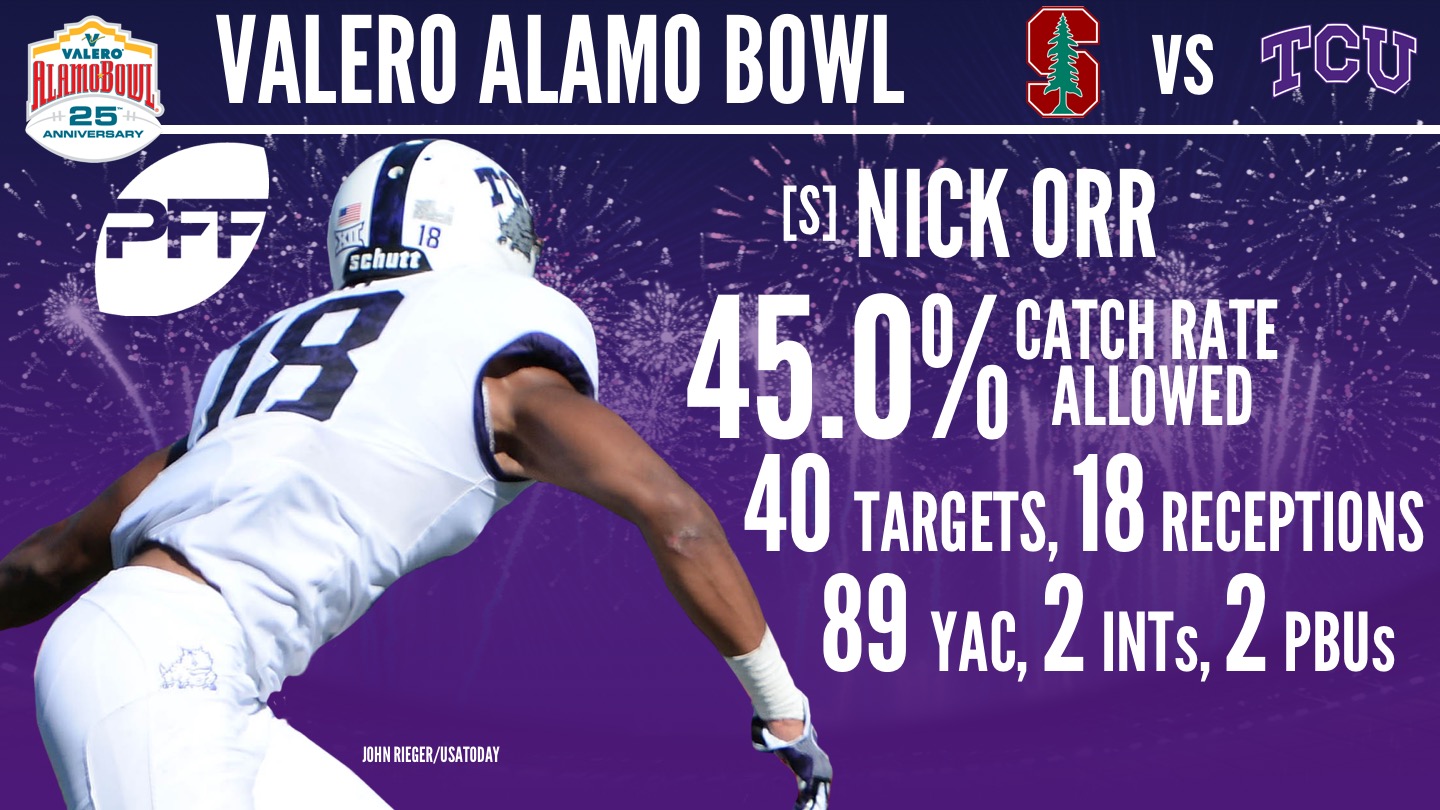 Orr’s grades have improved considerably this year, in large part due to him limited his missed tackles to eight, after posting 19 in 2016. While his 83.6 run defense grade this season is impressive, his coverage play is the primary focus of NFL scouts, as he gave up just 18 receptions on 40 throws into his coverage  and allowed more than four yards after the catch in just two games. While Orr is another undersized defensive back at 5-foot-10, 190-pounds, teams will love the versatility he displayed this year, as he split time evenly between free and strong safety, and also played almost 200 snaps from the slot. – @PFF_Josh