With eyes towards the 2018 NFL Draft, here are the players to keep your eyes on in the Goodyear Cotton Bowl Classic.

Sam Darnold had a roller-coaster season of performance with a hot start and a hot finish to the season with a mid-season slump in between. Darnold’s adjusted completion percentage of 70.6 ranks just No. 51 among draft-eligible FBS quarterbacks and is down considerably from the 77.0 he posted in 2016. The streaky Darnold could leave for the NFL after this year but is likely to stay in school to show a more consistently productive final season of football before entering the draft. – @PFF_Jordan 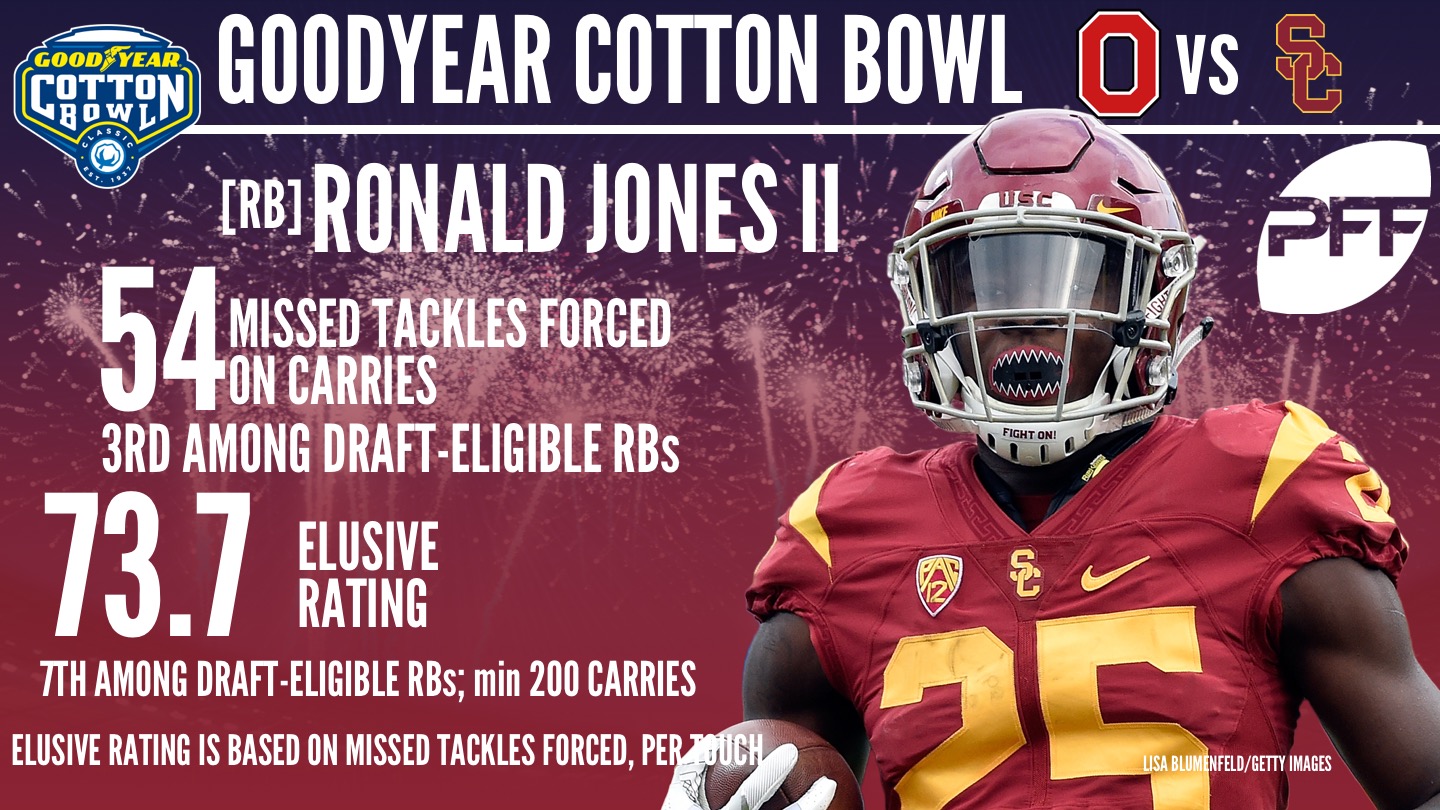 Ronald Jones II is a dangerous and productive running back that the NFL has been eyeing for some time. Jones has forced 54 missed tackles on the year as a runner which is third among draft-eligible FBS running backs while Jones’ elusive rating of 76.7 ranks him seventh among draft-eligible FBS running backs with at least 200 carries. Jones also averaged a very impressive 3.50 yards after contact per attempt this season. – @PFF_Jordan 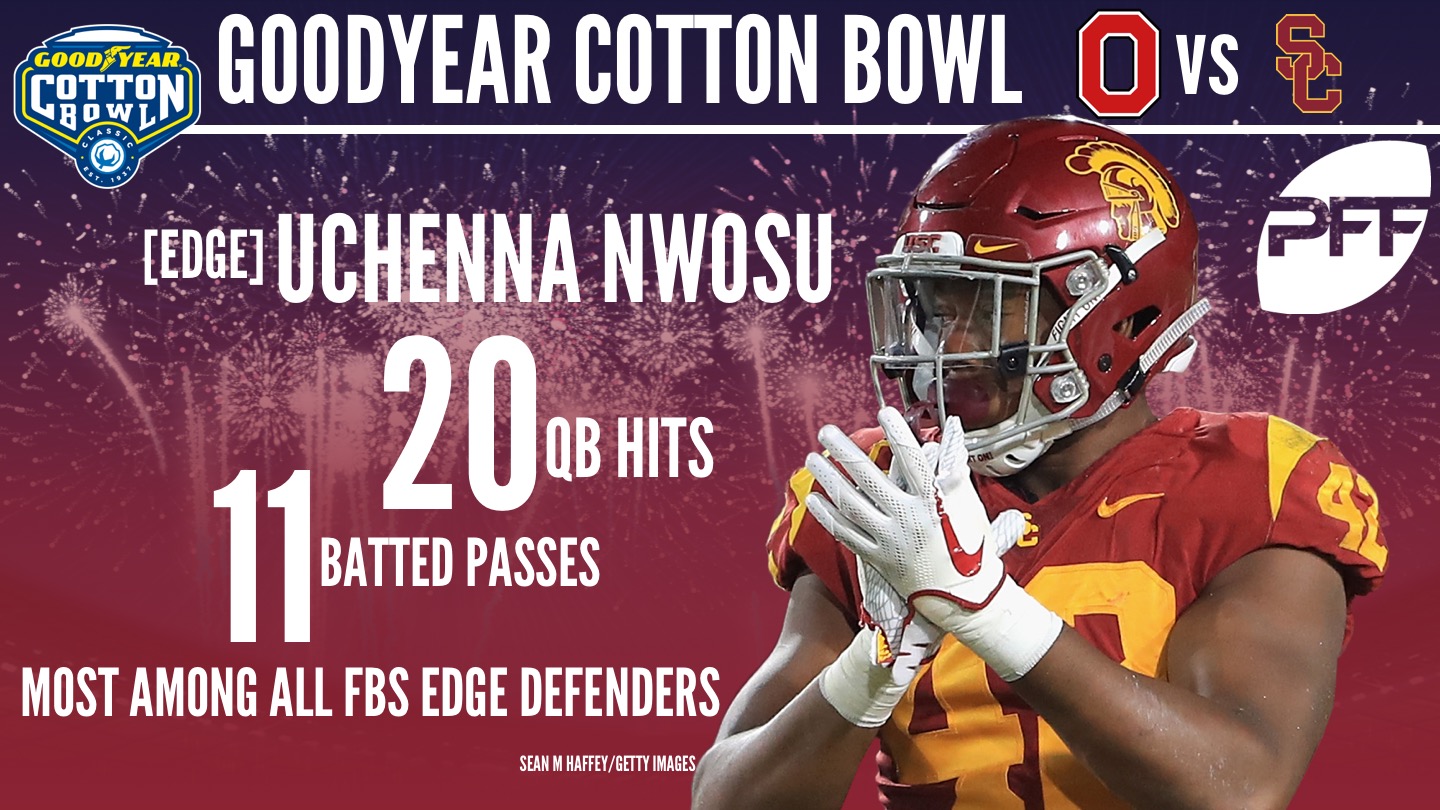 Uchenna Nwosu has been one of the more productive edge-rushers in the country this season. He only collected five sacks on the season but his pass-rush production also included 20 QB hits and 27 hurries for 52 total pressures on his 477 pass-rushing snaps. Nwosu’s 52 total pressures ranks No. 3 among draft-eligible FBS 3-4 outside linebackers. He also batted 11 passes on the season which leads all FBS defenders, and his 20 QB hits were also No. 1 among all FBS defenders. – @PFF_Jordan

Price’s sack surrendered against Michigan was the first and only one he allowed all season, and in total he gave up just 11 pressures. His 84.8 run blocking grade ranks seventh in the country among all FBS centers, helping to make him one of the most complete interior line prospects in the country. – @PFF_Josh

Jones’ 85.1 overall grade ranks first among all Big Ten tackle prospects in 2017. While his 79.6 run blocking grade hints at some inconsistencies in this phase of his game, in 904 combined pass-blocking reps between 2016 and 2017, he impressively gave up just three sacks. – @PFF_Josh 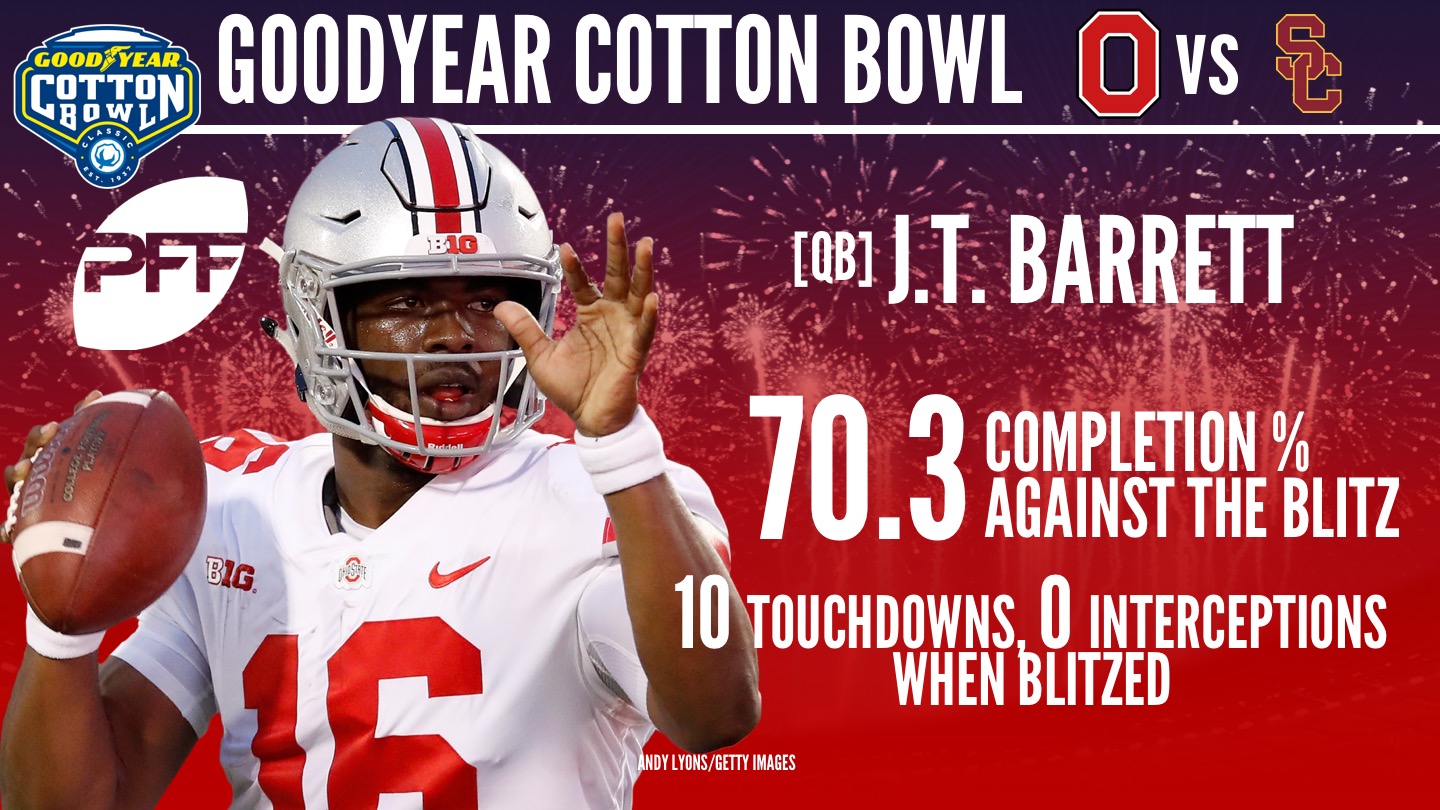 Barrett has played his entire college career at quarterback, but like others before him in Columbus, he is expected to switch positions at the next level. Barrett was excellent against the blitz this year, completing 70.3 percent of his attempts with 10 touchdowns and no interceptions when faced with an extra rusher. He struggled under pressure, however, as his 130.7 passer rating in a clean pocket plummeted to 48.0 when affected by pressure. – @PFF_Josh

Hubbard continued to elevate all phases of his game this year, despite a limited snap count on the deep Ohio State defensive line rotation. He saved his best efforts for last against Michigan and Wisconsin (in the Big Ten Championship game), posting a combined four sacks and 16 total pressures in those two games. – @PFF_Josh 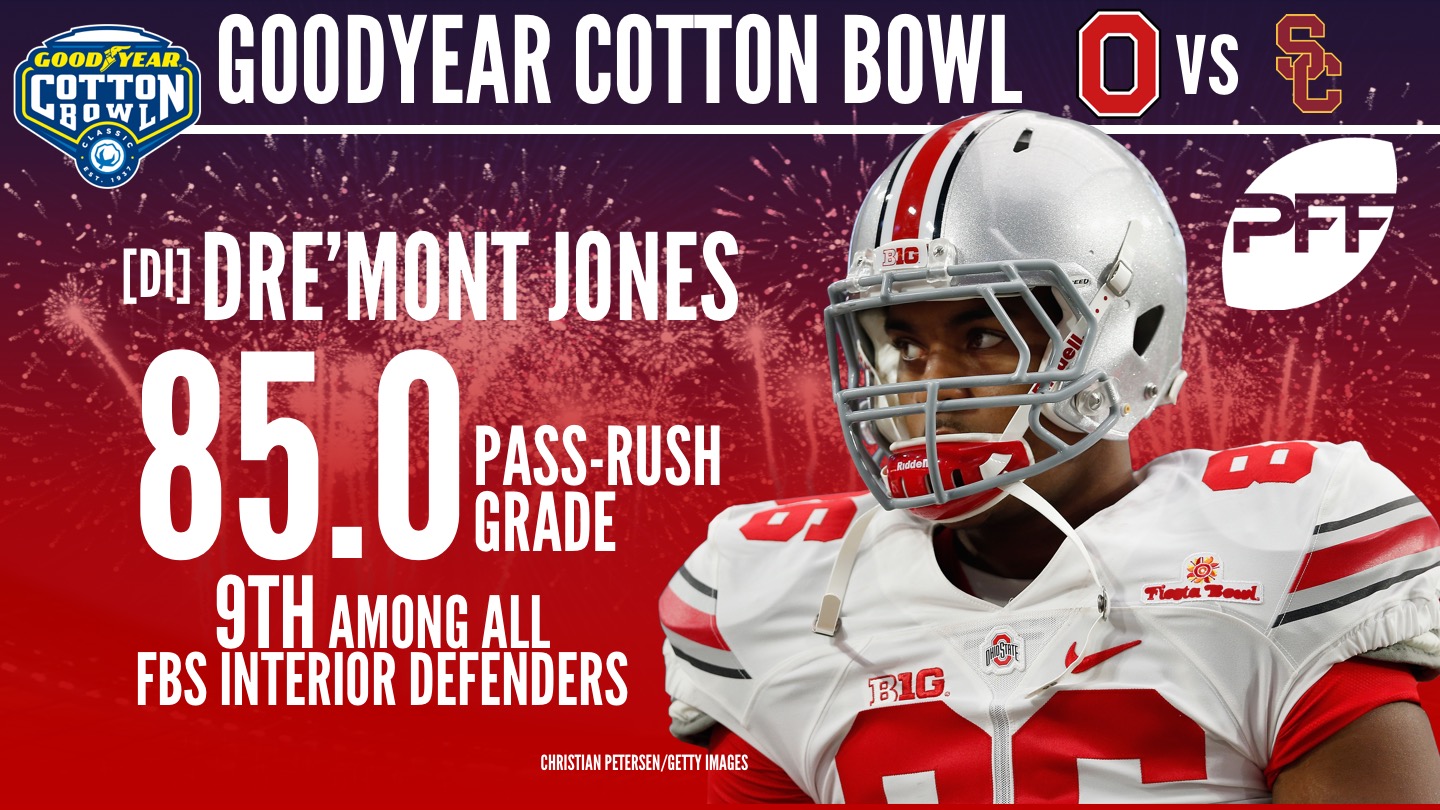 Jones’ run defense wasn’t as strong this year as it was in 2016, but his 85.0 pass-rush grade ranks ninth among all defensive interior players. He posted 19 total pressures and batted down two passes at the line of scrimmage this year, and has missed just one tackle between the 2016 and 2017 seasons. – @PFF_Josh

Worley was limited by injuries during the first half of the season, but was outstanding in all facets down the stretch. In the final six games, he posted 20 total defensive stops and seven QB pressures, and did not surrender a pass longer than 14 yards into his coverage. He ranked second among all off-the-ball linebackers in run stop percentage this season, and second in tackling efficiency among linebackers with at least 300 total snaps (one missed tackle). – @PFF_Josh 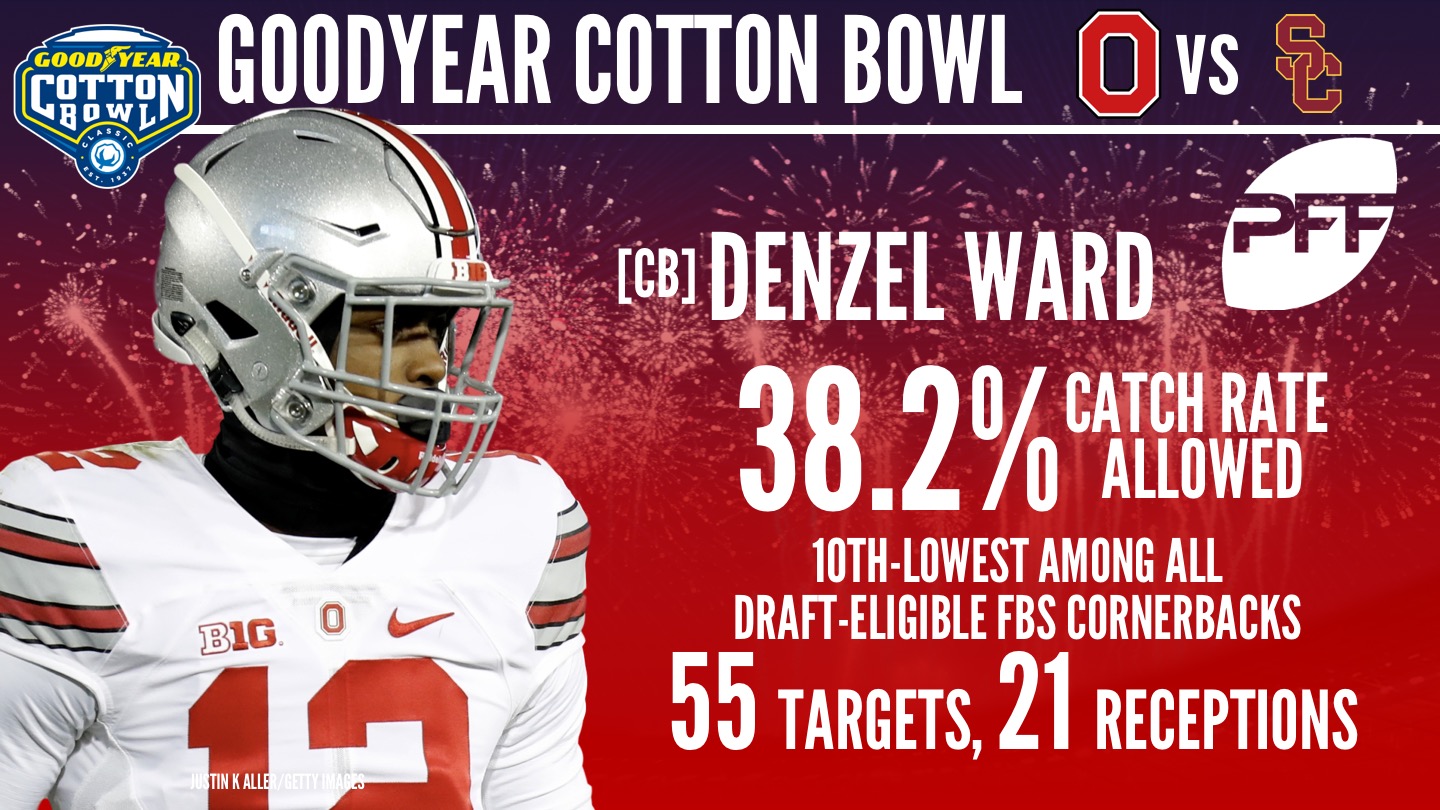 Ward has been one of the top cornerbacks throughout the 2017 season, and has the versatility to contribute both at safety and from the slot at the next level. He gave up just 21 receptions on 58 throws into his coverage this year, and successfully defended 14 passes. – @PFF_Josh

Webb was one of the best coverage safeties in the country this year, as opposing quarterbacks had a passer rating of just 29.5 when testing him. He posted four interceptions and a pass breakup, and did not give up a touchdown into his coverage in 2017. His passer rating against ranks fifth among all draft-eligible safeties this year. – @PFF_Josh