The New Orleans Saints defeated the Cleveland Browns, 21-18, continuing the second full week of action in the NFL. 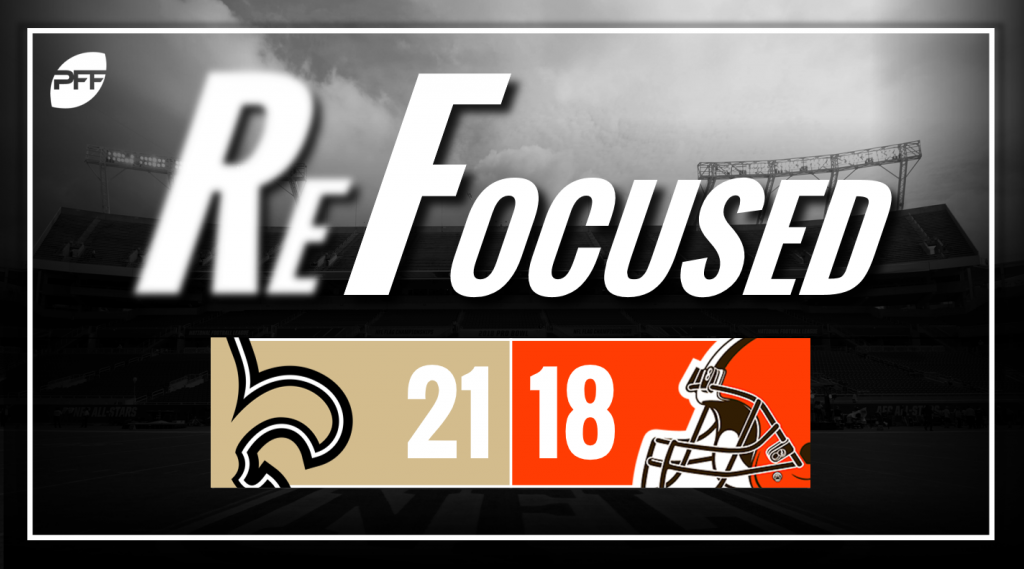 Drew Brees struggled on every deep pass in the game, to the point where he was badly underthrowing wide open receivers. The Saints offense looks out of sync at the minute, and the chemistry between Brees and his pass-catchers needs serious improvement going forward.

If not for wide receiver Michael Thomas, the Saints passing game would have been completely inept. Thomas managed 12 receptions for two scores and accounted for 89 of Brees' passing yards.

Rookie defensive end Marcus Davenport showed some promise against rookie left tackle Desmond Harrison. Davenport may not have been on the field for a lot of snaps, but was able to show some ability to rush the passer. The question going forward will be how he does against better competition.

Linebacker Demario Davis was all over the field in run defense for the Saints, consistently making tackles and shooting gaps. He was a force to be reckoned with up front and refused to allow the Browns rushing attack to get going.

Quarterback Tyrod Taylor threw one of the best passes of the week to bring the Browns level late in the fourth quarter. However, the Browns passing attack was a dink and dunk over the middle of the field for the majority of the game.

The Browns Offensive line was able to contain the Saints pass-rush for the duration, and the big guys up front were able to deal with anything the Saints threw at them.

The much-anticipated battle between Myles Garrett and Terron Armstead was a big disappointment. Garrett very rarely got the better of the veteran tackle and Garrett was a relative a non-factor as a pass-rusher.

The defense was able to stifle running back Alvin Kamara for the first three quarters by flowing quickly to the ball anytime he was tasked with a carry. While Kamara was able to force a missed tackle or two, there was always another two or three defenders on hand. In the fourth quarter, the Browns defense started to falter and allowed Kamra more room to operate, as he slowly took over the game and was able to move the chains.

New Orleans:  The Saints struggled for most of the game on offense, but when it counted in the fourth quarter, they were finally able to get going. Most of the offense ran through Michael Thomas and Alvin Kamara, and the dynamic duo ultimately did enough to lead their team to victory.

Cleveland:  The Browns had every chance to win the game but the two missed PATs and two missed field goals killed their chances.