The Denver Broncos should be in the market for Jameis Winston

Former No. 1 overall pick Jameis Winston will not be playing for the Tampa Bay Buccaneers next year, at least not as a starter. That we know after the clock ran out on Buccaneers' chance to use the franchise tag on him, and the world found out shortly thereafter that six-time Super Bowl champion Tom Brady was coming to Tampa.

The thing about Winston is that he wasn’t awful, despite the terrible optics of a 30-interception season. He was 17th in EPA per dropback and 19th in PFF passing grade (minimum 400 dropbacks), and average quarterbacks have value in the NFL. According to our wins above replacement (WAR) metric, Winston has ranked as the 14th, 11th, 8th, 21st and 19th most valuable quarterback during his first five NFL seasons.

The future seems to hold a backup role for Winston, but that doesn’t restrict him from eventually being a solid contributor in 2020. Using the recently introduced Improvement Index, which simulates the season and projects WAR for each team at the player level, I ran scenarios with Winston added to different NFL rosters to see how much value he could contribute. There were a handful of teams where the models behind the index saw Winston as the likely starter, considering the gap in pedigree and performance between him and the current quarterback options.

We can rule out some of those teams, such as the Chicago Bears, as realistic options, as they already have two quarterbacks who would start ahead of Winston on the depth chart. But there were four teams for which the model saw Winston adding value: the Miami Dolphins, Washington Redskins, Los Angeles Chargers and Denver Broncos. Each of these franchises claims to have their starter, or will likely take one in the draft, but our Improvement Index models disagree.

The plot below shows the projected quarterback for each of the four teams currently, with Winston added to the roster, and the difference between the two. The Broncos’ faithful seems to believe in Drew Lock right now, but our model sees Winston as a significant upgrade. 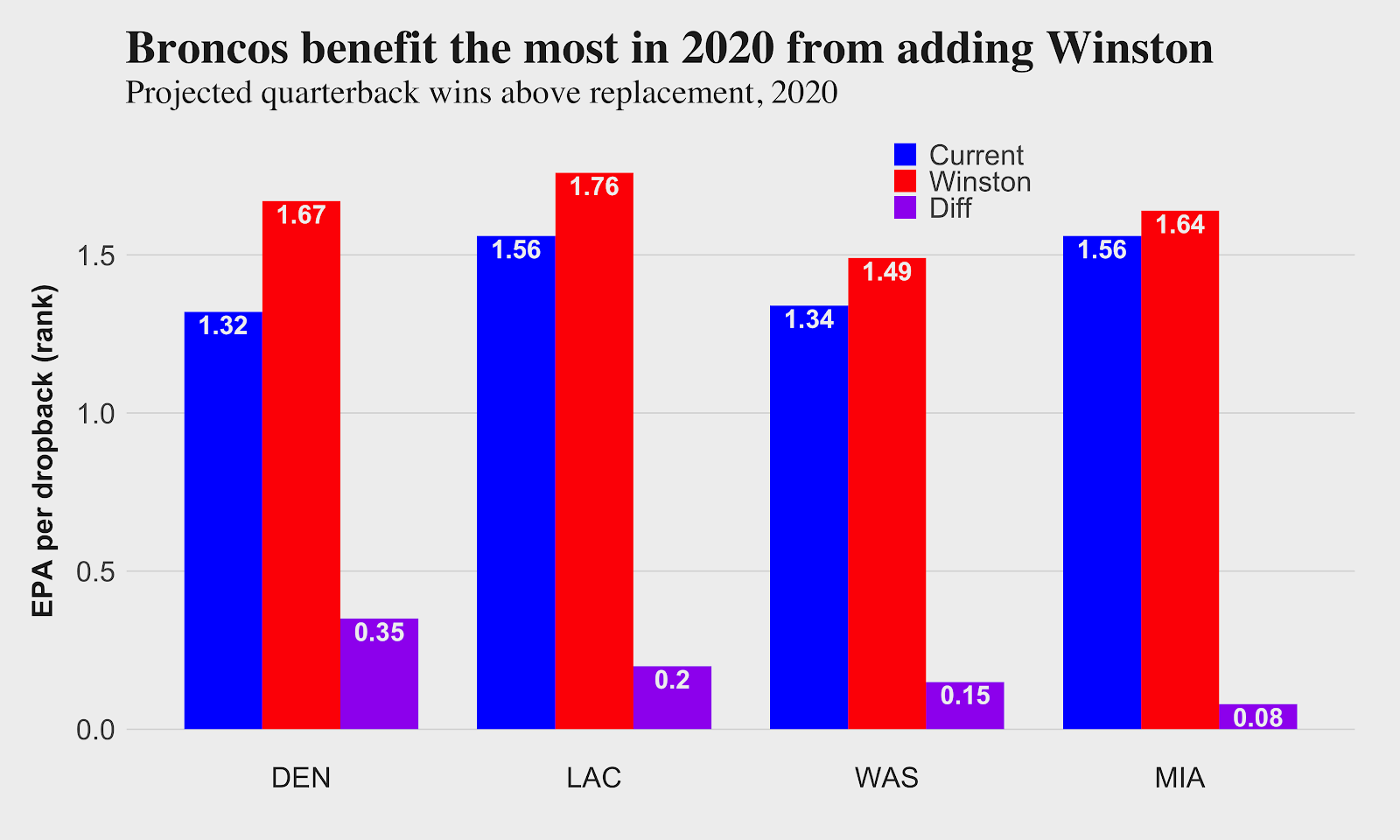 For all the promise Lock showed as a rookie last year, it was only an incredibly small sample of five games. Our projections for Lock should still be heavily influenced by our prior for based on Lock’s draft position, which in the middle of the second round is a harbinger of struggle more than success.

Lock also didn’t grade very well on his 172 NFL dropbacks, posting a 56.9 passing grade that ranked 34th of 39 qualifying quarterbacks. The only signal-callers with lower passing grades in 2020 were Case Keenum, David Blough, Mason Rudolph, Kyle Allen and Devlin Hodges. I don’t think there are many advocating for starting positions among that group.

Adding 0.35 wins may not seem like a ton of value, but it’s slightly more than the Arizona Cardinals gained by trading for DeAndre Hopkins and would move the Broncos far up our Improvement Index. With the addition of Winston, we project that the total quarterback WAR for the Broncos would go from third lowest in the NFL to 19th in 2020. 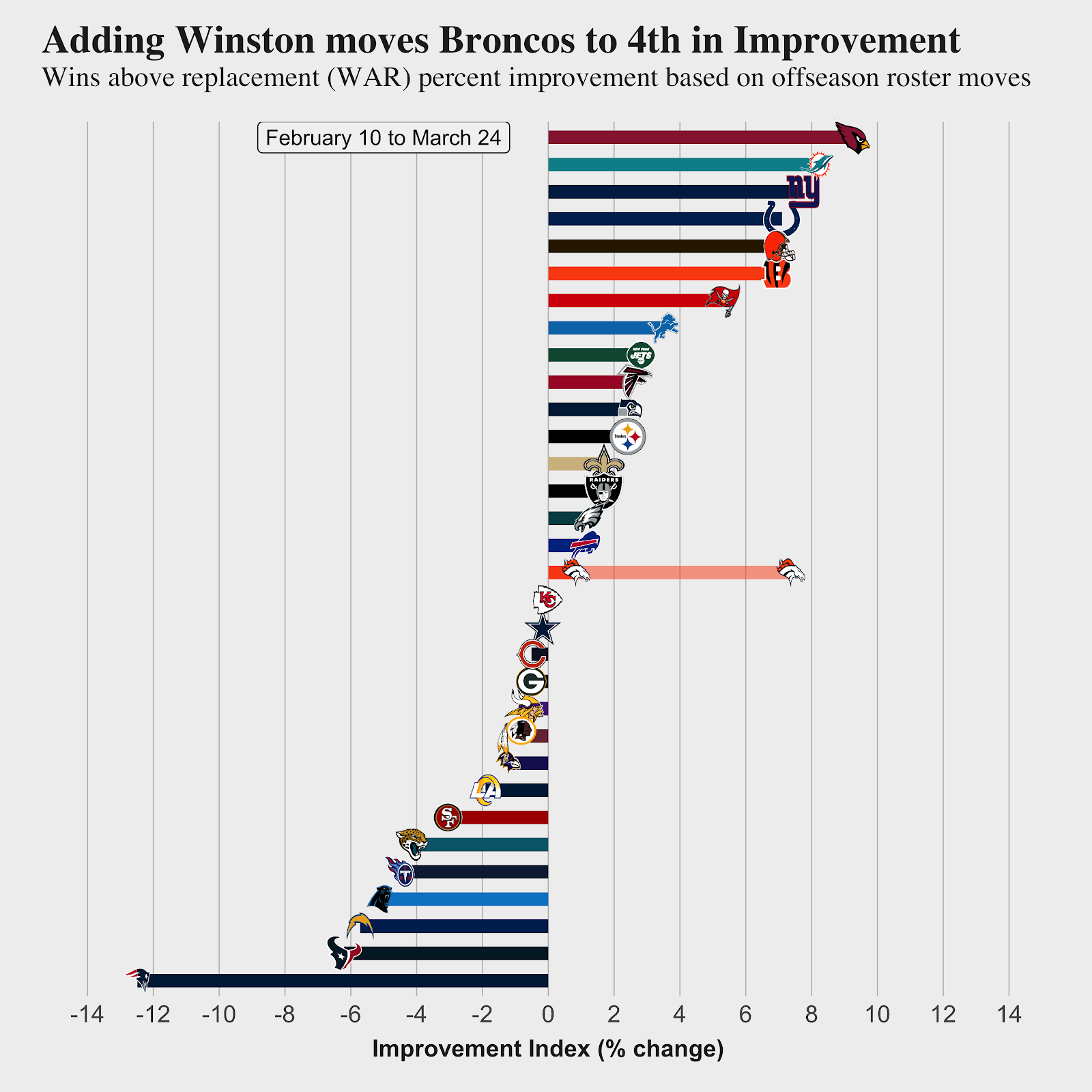 The Broncos probably aren’t in a position to compete for a Super Bowl this season, but they also should write-off the season and start over at quarterback if Drew Lock performs like a player who all NFL teams passed on at least once during the 2019 Draft.