In redraft and dynasty leagues, fantasy football managers have the weekly choice of who to play or not play. We get burned pretty often by “boom-or-bust” players, and it usually stings. That's not the case in best ball fantasy leagues, where we draft a full team and play out the entire season with best scores from each week automatically populating our starting rosters.

Best ball strategies are largely focused on roster construction and upside. But one thing that isn't discussed as much when it comes to best ball is variance — higher highs and lower lows. These types of players may have a mean fantasy points scored that isn't pretty, but they provide enough big games over the course of the season to break into our starting lineups — at a low draft cost.

Variance and its role in providing best ball value

I studied whether or not a player “owns” his variance from year to year — is a player with higher variance more likely to have high variance the following year? The answer is that to some degree wide receivers and tight ends are likely to own their variance, while quarterbacks and running backs aren't. This makes sense anecdotally, as we already know that receivers typically have a sticky average depth of target year over year. And, even better, we know that aDOT also transfers from college to the NFL for wide receivers. 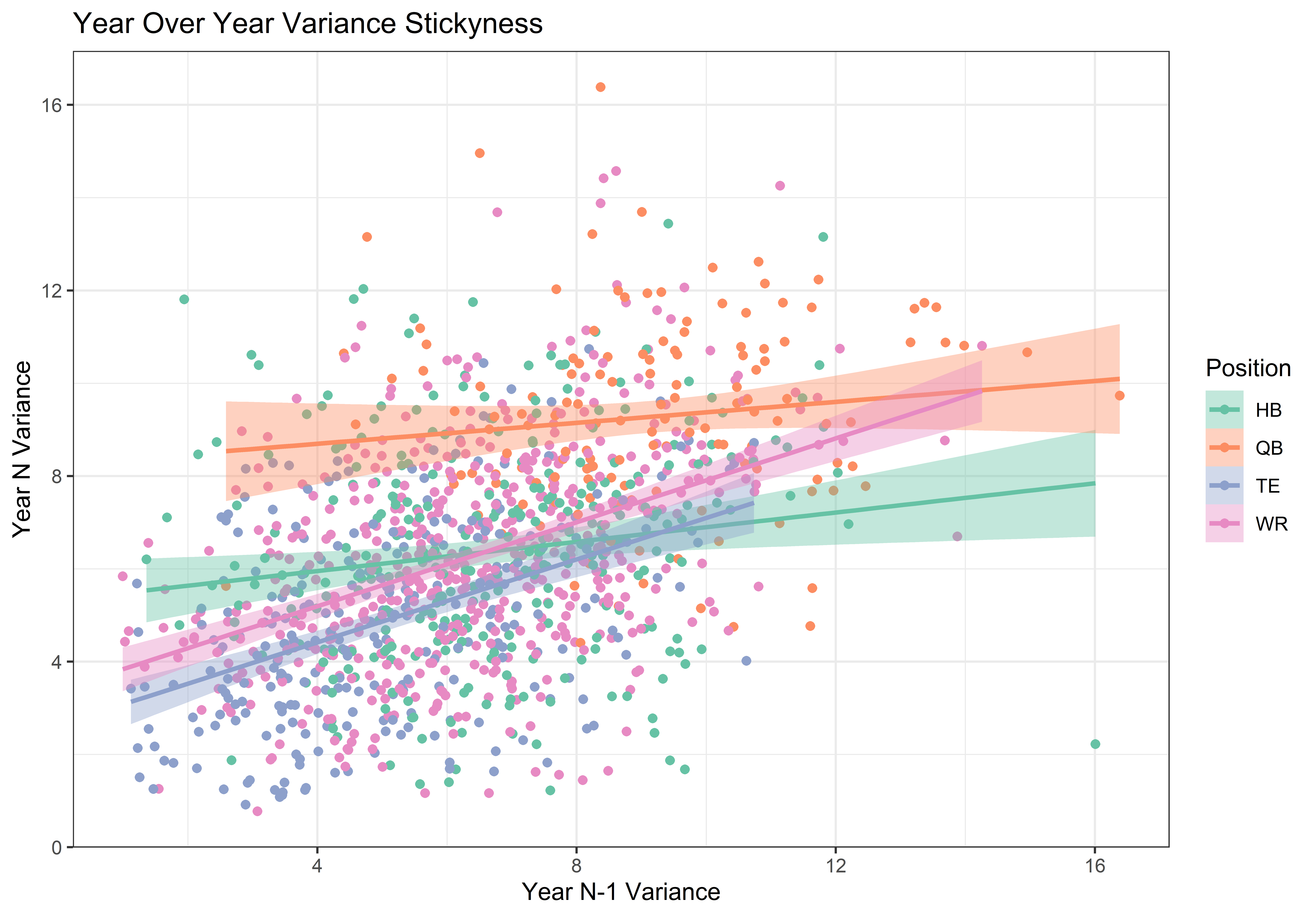 With year over year graphs, we’re looking for a diagonal line to find predictive insight. As we can see, wide receiver and tight end are really the only two showing similar stats year over year. The R2 for wide receiver year-over-year variance stickiness is .185, and it's .193 for tight ends. Not the greatest of correlation, but there is some signal there.

So what does this mean? We want players that boom, right? We can capture this by finding players later in the draft. In fact, for players drafted after the second round, variance plays a *very* important role in achieving boom weeks. For this, I defined a “top positional week” as top 12 for running backs and wide receivers and top six for quarterbacks and tight ends.

The charts below show the relationship between mean fantasy points, variance of fantasy points and top positional weeks for players drafted in the third round or later. 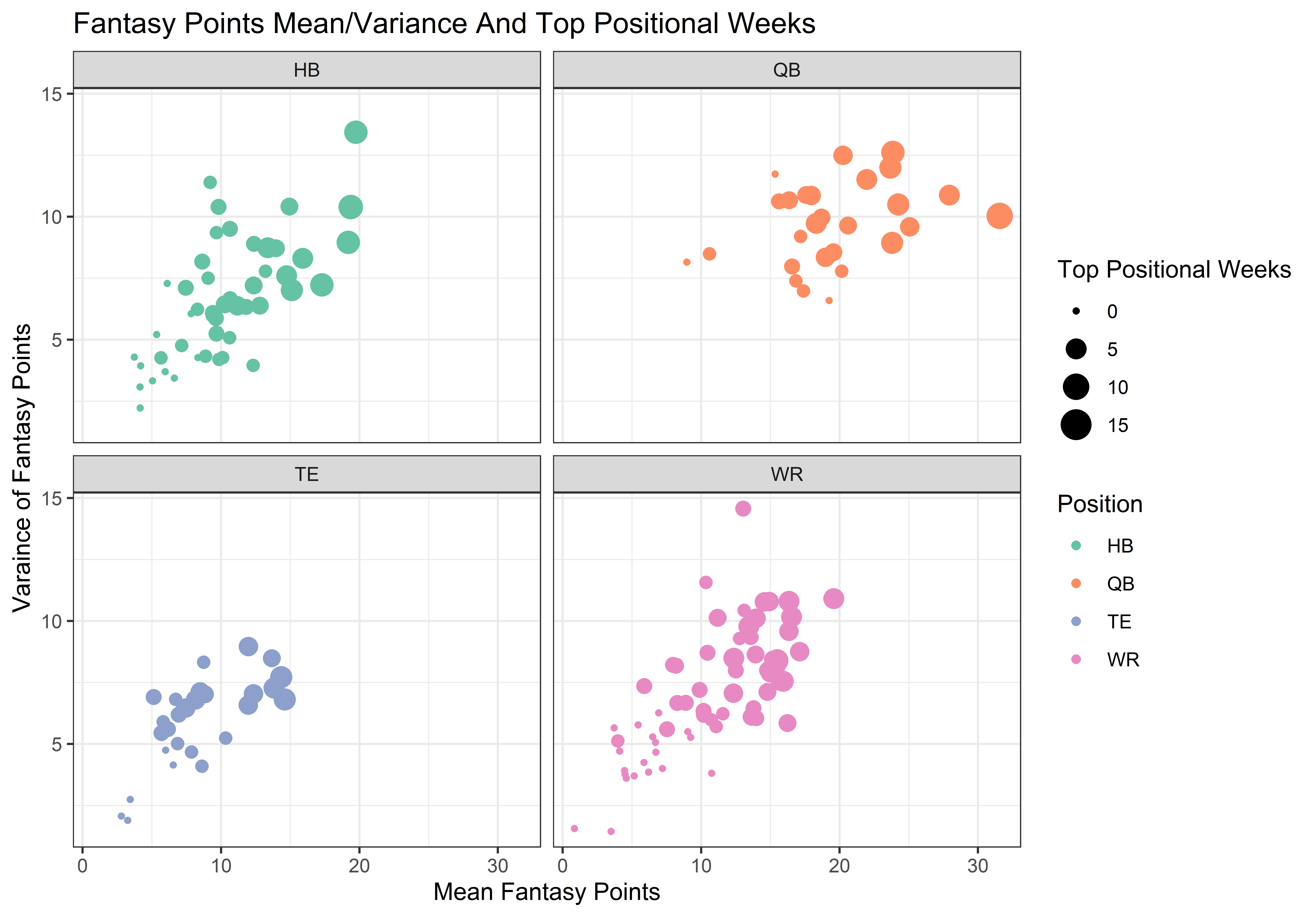 The relationship is quite clear — most players with lower average fantasy points have a smaller variance in their week-to-week scoring. But when a low-average player has higher variance, those spikes are useful in best ball formats. Here, we find a grouping of wide receivers and tight ends who reach five to seven top positional weeks without being a weekly performer. 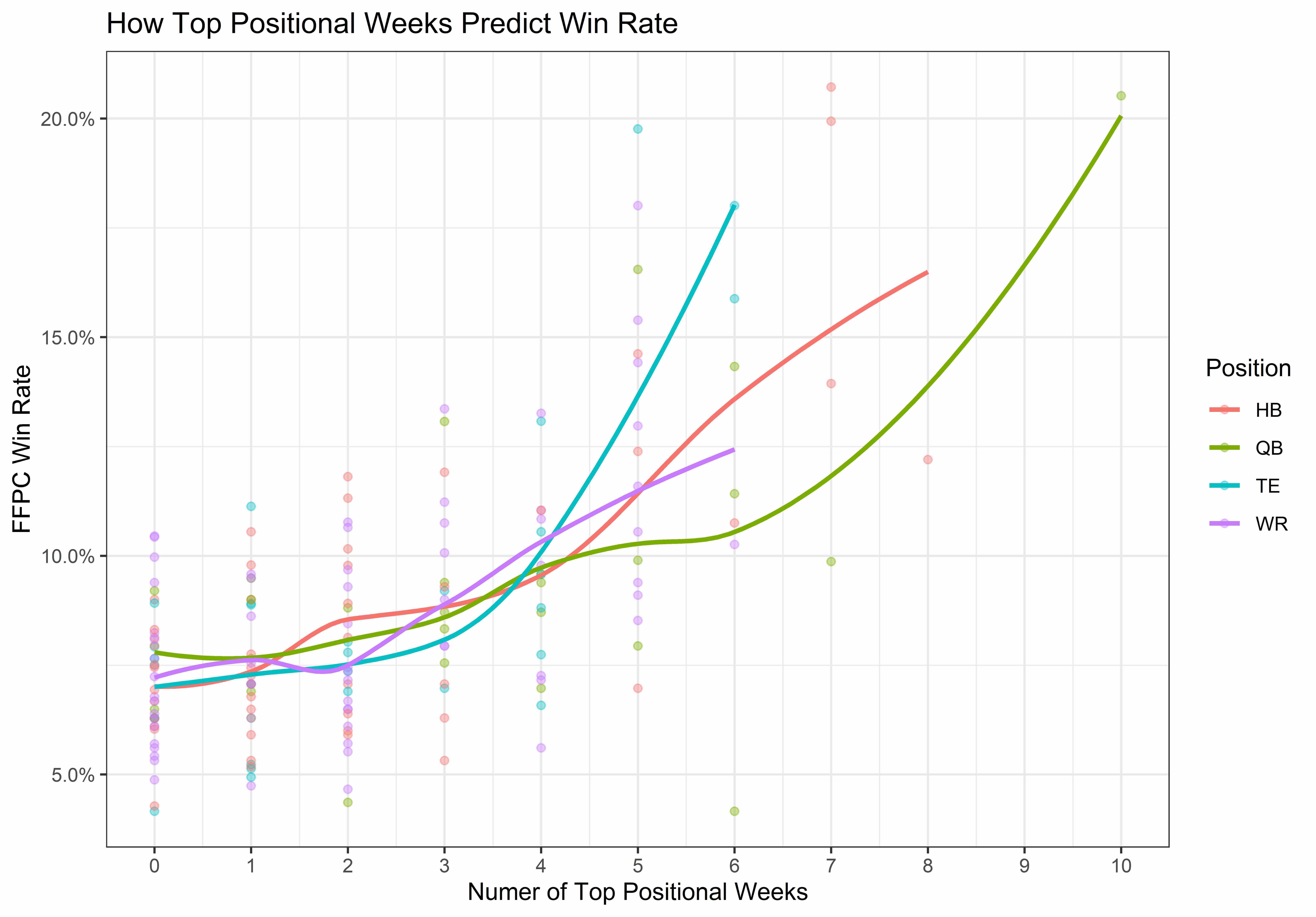 For all positions, having even four or more top positional weeks leads to a significant increase in player-based win rates. This should be fairly obvious, but with our knowledge of variance we now know that you don’t need a top-end fantasy star to achieve these weeks.

Here is a stat that will surprise most: From weeks 1-11, Everett saw seven targets 20-plus yards downfield, while Tyler Higbee only had one. Everett also out-targeted Higbee 57 to 33. He was clearly the priority option prior to his injury.

Everett provided just two top positional weeks last year, but once healthy he could provide a few more than that in 2020. Higbee is being hyped like crazy and being drafted much sooner than Everett in FFPC leagues — their ADPs are 66 and 174, respectively. Fade Higbee and snag Everett.

One of the most disrespected players as far as ADP goes, Crowder is currently the 44th wide receiver off the board in FFPC best ball drafts. In 2019, he had four weeks with north of 20 fantasy points and five top positional scoring weeks in total.

The Jets have 175 vacated targets from key skill position players and only added Breshad Perriman and rookie Denzel Mims. Crowder’s role in this offense has been solidified — he should be a target in every fantasy draft.

Gesicki is definitely a breakout favorite in the fantasy community. PFF’s Andrew Erickson recently did a full breakdown of what Gesicki brings to the table. Gesicki’s 75.6 grade and 15 deep targets — combined with Ryan Fitzpatrick’s carefree passing style (or Tua’s impressive resume) — could lead to some high variance and quite a few top positional weeks in 2020.

Before getting injured in Week 8, Stafford was the sixth-highest-scoring quarterback in fantasy points per game. He provided five top positional scoring weeks out of eight games played. Even though his off weeks were rough — he struggled against the Eagles and Packers — in best ball we can just mask them with one of our other rostered quarterbacks.

Looking at PFF's Strength of Schedule tool, the Lions have the seventh-easiest schedule for quarterbacks in the fantasy regular season. They do have tough matchups in weeks 14-16, but in best ball this bears much less importance.

I have been canvasing hard for the Jones hype train this year — partially due to the same reasoning as with Stafford, but Jones proved last year that he doesn’t even need Stafford to perform. I touted Jones recently by leveraging our PFF Fantasy Projections. The projections slot him as the No. 21 wide receiver for 2020. The Lions offense is largely unchanged sans the addition of running back DeAndre Swift.

In 13 games played in 2019, Jones dished out four top positional games with 19-plus fantasy points — one of which came with Jeff Driskel as his quarterback. Jones is being drafted as the WR37 right now in FFPC best ball drafts. If Stafford can stay healthy, Marvin Jones will be a stud at very cheap draft cost.