Godwin's game-winning touchdown reception capped off an already strong performance for the rookie wide receiver, as he led the team with 111 receiving yards on his seven receptions.

Despite the loss, New Orleans will still enter the postseason as the NFC South champions given that the Carolina Panthers' dropped their season finale against the Atlanta Falcons. Quarterback Drew Brees & Co. will host the Panthers in the Wild-Card round.

Matched up against the formidable Ken Crawley for much of the day, Godwin had a breakout game, with the exclamation point being the game-winning touchdown bomb with nine seconds left in the game. For the game, he caught all seven catchable balls into his coverage for 111 yards and the score, with five of the catches and 87 yards coming from 10 matchups against Crawley.

Winston finished spectacularly, but he made way too many poor decisions and was extremely reckless with the ball. He threw three interceptions on the day, but two others were dropped by defenders. In all, Winston threw seven turnover-worthy throws on the day.

McCoy was solid throughout the game, disrupting and having an impact defending the run and rushing the passer. McCoy finished the game with four tackles and two solo stops defending the run, to go along with three QB hurries.

Grimes was on lockdown for the most part, as the majority of the Saints' passing attack found success throwing at opposite corner Ryan Smith and linebackers underneath. Grimes was targeted four times, allowing one catch for just nine yards and also recording a pass defensed.

Brees was efficient throughout the game with his accuracy at every level and decision-making. Brees stayed patient and took the underneath throws when the Buccaneers dropped deep in their zone coverages, completing 19-of-21 passes for 139 yards and one touchdown on throws traveling less than 10 yards. He was also able to flip the field with a couple big-time throws down the field, going 3-of-5 for 106 yards on passes thrown 20 plus yards down the field.

Thomas had a standard game for his accounts, hauling in a deep shot on a double move down the field and working well underneath. He finished with six catches on eight targets for 94 yards. Thomas saw 36 of his yards come after the catch.

Lattimore has had an outstanding rookie season, but today was easily his worst showing of the year. While he did notch a pass break-up, he gave up four receptions for 77 yards, 43 of them coming on a pass to Adam Humphries on which he busted the coverage.

In what was a rare rough showing for the New Orleans secondary, Williams stood out as the lone star of the day. He notched two picks, one by cleaning up on a terrible decision Winston in back of the end zone and the other an impressive bait and close in the middle of the field. He also notched seven solo tackles and a defensive stop. 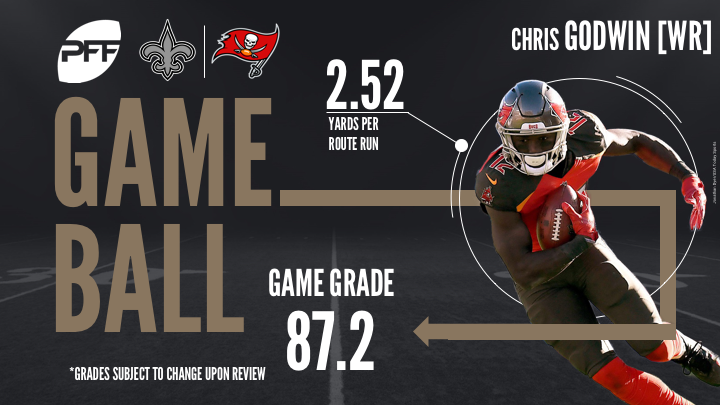