Free agency is all about shoring up weaknesses or mitigating losses. It’s most important to fill needs in free agency and through trades as it’s best to head into the NFL draft with few holes on the roster. Many teams show their hand when it comes to team-building, attacking the same positon with multiple options and it can lead to a game-changer at a position of weakness. In other cases, strong positions need to be replenished, and finding the right fits are crucial to duplicate past successes. A number of teams upgraded or maintained an entire position group extremely well thus far this offseason, so here are the units that most benefitted from their upgrades as we head toward the draft. 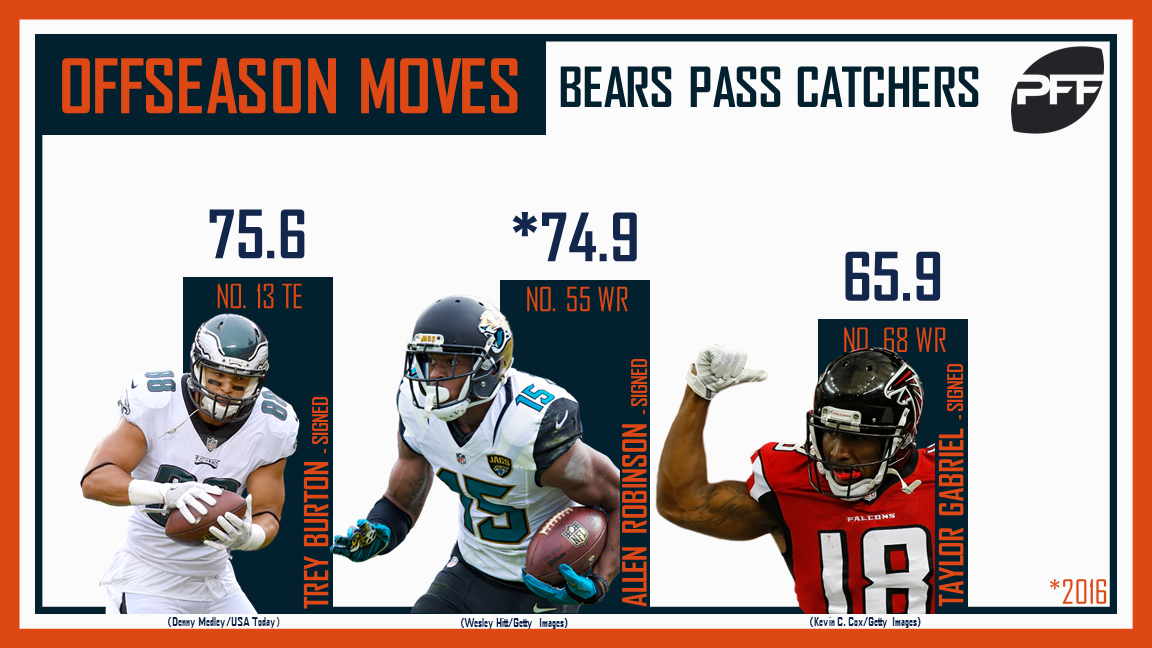 Second-year quarterback Mitchell Trubisky has a new set of weapons with unique skillsets, from Robinson’s downfield playmaking, to Gabriel’s route-running, to Burton’s ability to create mismatches as a “move” tight end. These were all necessary moves for the Bears who have trotted out one of the worst group of skill position players in recent years, but they’ve overhauled their pass-catchers in an offseason. The hope is that Robinson can recapture his 2015 magic that saw him lead the league with 672 yards on deep passes while averaging 17.5 yards per reception. Gabriel complements Robinson well as a dynamic receiver in the short game as he’s averaged 6.8 yards after the catch during his career and he’ll make the most of his opportunities in the screen game. Burton comes with some risk after playing only 741 career snaps, but he showed the ability to line up in multiple spots last season while providing a red zone threat with five scores on his 24 receptions. These additions allow the Bears to slot their current skill position players into complementary roles rather than featured pieces, making the unit one of the most improved groups in the league.

New England is generally filled with solid players along the defensive line, but they were a step behind as a unit last season. They took a step back against the run and they lacked the edge defenders to pressure the quarterback in must-pass situations. They’ve added two key pieces in Shelton and Clayborn, both former first-round picks who were linked as potential Patriots back during their respective draft years. Shelton may not have lived up to the hype as the No. 12 overall pick in the draft, but he’s developed into a strong run defender where he graded at 85.9 last season. He can disrupt blocks, but he also finishes plays as he’s ranked in the top-10 in run stop percentage over the last two years. He pairs with fellow 2015 draft classmate and first-rounder Malcom Brown as one of the best run-stopping duos in the league. As for Clayborn, he’s coming off career-highs with a PFF grade of 85.5 overall and 55 total pressures. Clayborn’s presence takes some of the pressure off Trey Flowers on the other side (87.8 overall grade last season) and it allows 2017 rookies Deatrich Wise and Derek Rivers to carve out roles as situational rushers. The Patriots head into the 2018 season with a much deeper crop of defensive linemen and they should improve both against the run and rushing the passer.

Even if this offseason ends up as a lateral move for the Eagles, maintaining their spot as the best and deepest defensive line in the league is major haul. They were rolling seven deep up front last season but they were forced to move on from edge defender Vinny Curry and defensive tackle Beau Allen. While Curry had an excellent 2017 season, they may have upgraded with Bennett, especially when he’s unleashed as part of a rotation. His 80.6 overall grade last season was his lowest since 2010, but he was still one of the league’s best pass-rushers, finishing with 70 total pressures. Bennett can create pressure from anywhere along the defensive line, adding even more versatility to the front. On the interior, Ngata steps in to replace Allen, and it’s another potential upgrade for the Eagles. Ngata was limited to only 145 snaps last season, but even heading into Year 13 of his career, he’s still a useful player in a rotational role. Controlling the snap count should get the best out of Ngata and he’s just another piece to what should be another dominant season from the Eagles’ defensive line. 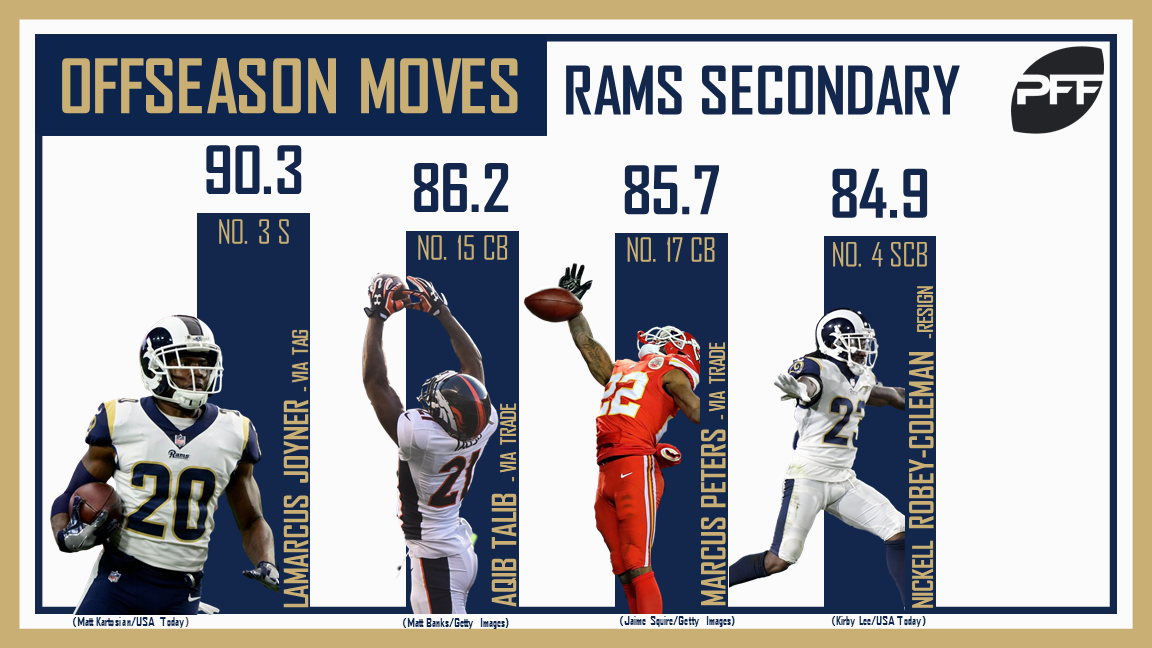 Defensive coordinator Wade Phillips loves playing man coverage and this year’s offseason strategy was clear: give him the weapons to run his favorite schemes. Talib played under Phillips in Denver where the Broncos featured one of the best secondaries in the NFL for multiple years. He’s playing the best football of his career, coming off a 90.6 overall grade in 2016 and an 86.2 grade last season. While Talib has nine years of experience under his belt, the Rams get Peters right in the middle of his prime. He’s one of the best playmaking corners in the NFL, and he’s coming off a career-high 85.7 overall grade. With Talib and Peters on the outside, the Rams locked up Robey-Coleman to man the slot and he’s also coming off a career-high grade at 84.9 overall. Robey-Coleman ranked 10th among slot corners with only 0.80 yards per cover snap last season. Finally, Joyner is yet another player peaking at the right time after his 90.3 overall grade ranked third in the NFL last season. He successfully moved from the slot to more of a traditional safety role bringing a playmaking presence on the back end with three interceptions and five pass breakups. When you throw in one of the best rookie safeties in the league last year in John Johnson and the emergence of Troy Hill at corner, and the Rams are loaded in the right place in today’s NFL.