2021-22 NFL Free Agency: Which NFL teams are in the best position to spend big?

6. Packers (9): They've won five in a row and could soon get All-Pro LT David Bakhtiari, who tore an ACL in December, back in the lineup to protect QB Aaron Rodgers. Stock up. Syndication Usa Today

With almost 11 weeks of the 2021 NFL season in the books, some teams are firmly in the playoff hunt while others may already be looking to the future and the 2021 NFL free-agency period.

This free-agency class has some real headliners to watch out for, and more than a few teams have a good chunk of money to spend.

As PFF salary cap expert Brad Spielberger has already pointed out, the cream of the crop for this year's class comes at the wide receiver position. However, there are other interesting markets to watch, including the safety and “bridge quarterback” markets.

Here, we will examine which teams have the most money to spend and look at how cash-strapped teams can free up money. All contract information comes from our friends at OverTheCap. 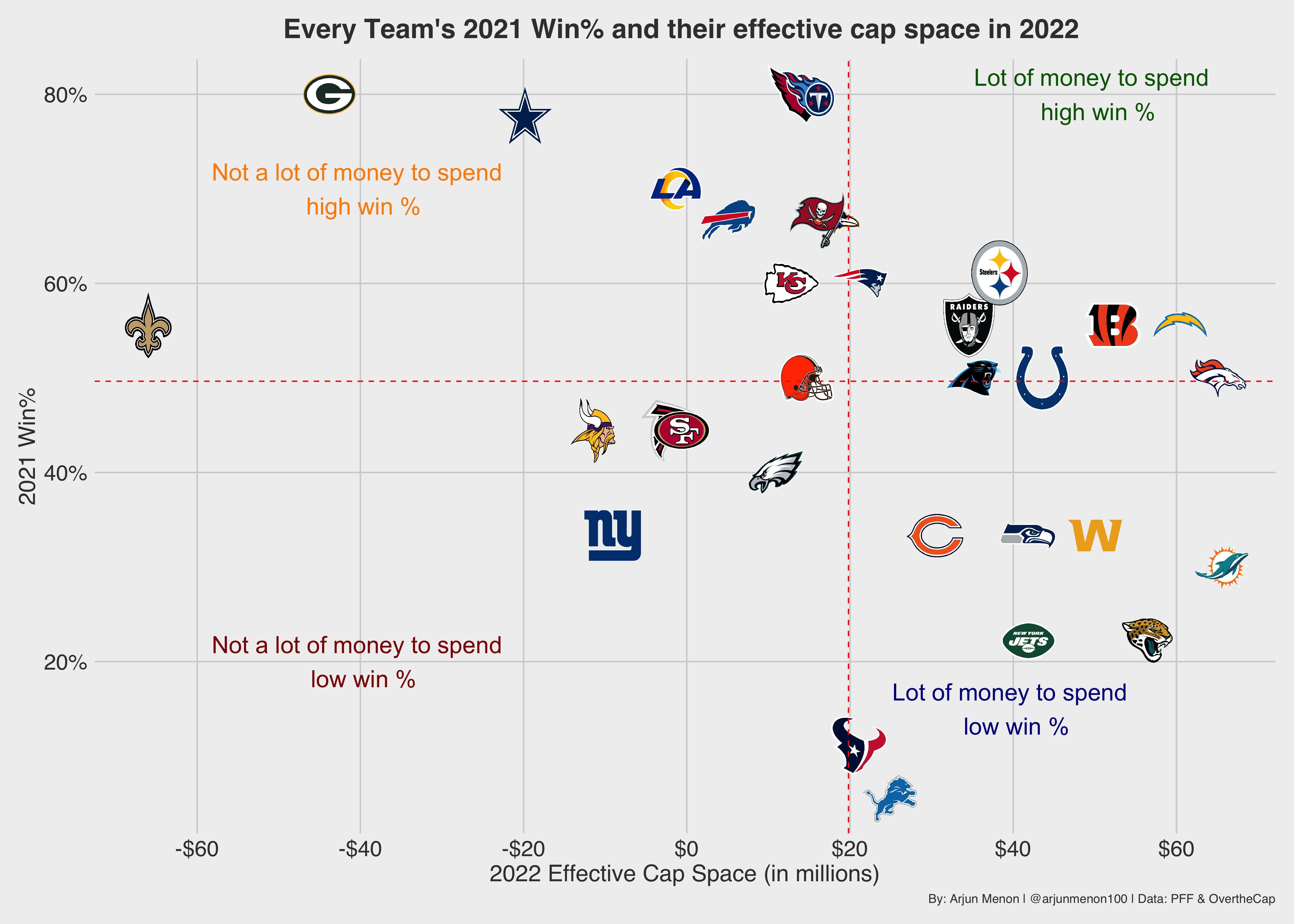 The Denver Broncos and Miami Dolphins lead the NFL in available salary-cap space, while the Green Bay Packers and New Orleans Saints have the least left to spend.

The above graph shows the teams that are in a good position to contend this year yet still have cap space to spend big on free agency in 2022. Those teams, such as the Cincinnati Bengals and Los Angeles Chargers, have a quarterback on a rookie deal, which gives them a ton of flexibility.

The Pittsburgh Steelers‘ cap situation is slightly more difficult to decipher since we have no idea what their quarterback situation will be next year. If they decide to sign or trade for a veteran, most of their cap will be allocated there. On the other hand, if they decide to start over in the draft, they will have a decent amount of money to spend, though they have contract extensions looming for players such as Minkah Fitzpatrick and Cameron Heyward.

It's also worth looking at the bottom-left quadrant of the graph above, which includes the New York Giants and Minnesota Vikings. This is the quadrant that shows what I like to call the “failed all-in approach.”

Teams here seemed to buy into their team and pushed all their chips into the middle last offseason. But, unfortunately, things haven’t worked out in their favor.

The New York Giants were one of the most aggressive spenders in free agency this year, as they were trying to maximize their flexibility in Daniel Jones‘ rookie contract. This hasn’t panned out, as they have a 3-6 record after nine games. Other factors are contributing to their record outside of the failed free-agent signings, but this leaves them in a not-so-enticing situation heading into 2022.