The first round of the 2020 NFL Draft didn’t see its first trade until pick No. 13, but the trade market picked up some steam later in the first round with three additional trades thereafter. Here are our grades for the respective moves. 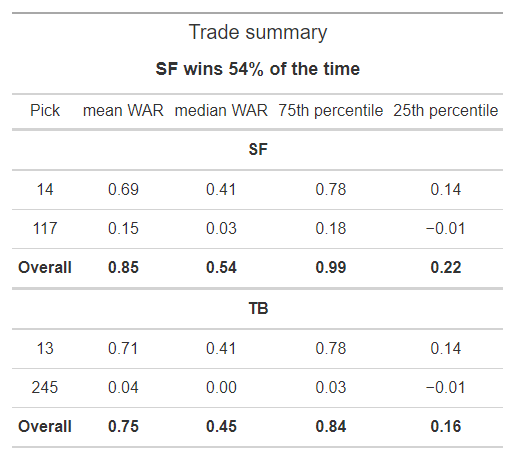 Let’s start with an easy one: From the San Francisco 49ers’ perspective, this was a no-brainer. Given how the offseason developed in Tampa Bay, it was no secret that the Bucs were looking to improve their offensive line. The 49ers would have been fairly certain about which player the Bucs wanted and apparently had no interest in bolstering its offensive line that early in the draft. This trade was just free draft capital for John Lynch.

From the Bucs’ perspective, the analysis is a bit more complicated. First of all, why did the Bucs move up only one spot? They must have feared a team like the Miami Dolphins using their substantial draft capital to make a from No. 18 to No. 13. We will never know if this was justified or if Jason Licht just saw ghosts, but the Dolphins supposedly reaching for an offensive tackle at No. 18 at least gives us a hint in that direction.

The base rates tell us the Bucs lose this trade more often than not, but 54% is reasonably close to a toss-up. And, of course, each individual case can move the base rates.

In the process of preparing for the draft, I’ve written about positional tiers — and this was a perfect example. Among the public, there was a clear top-four among offensive tackles, with all of them supposedly worth a top-10 pick in the NFL draft. Tristan Wirfs was the last player remaining of this tier, and in this situation, our certainty that he is better than the next offensive tackle drafted increases by a significant margin.

Consequently, making sure nobody jumps you to draft him might be a legit alternative to just hoping this won’t happen, a strategy the Houston Texans probably regretted in the first round last year. In other words, there is an analytical reason why this was a better move than the base rates suggest. The fact that it’s one of Mike Renner’s favorite picks only adds to the positives.

It’s not all rosy, though. The part I don’t like about the process is that the Buccaneers forced themselves into such a move by not really having an alternative at the right tackle position. There is a good chance they have just ended up being lucky that the run on offensive tackles wasn’t as intense as people imagined. If the Los Angeles Chargers passed on Justin Herbert to take an offensive tackle, the Bucs likely would have had to jump the Cleveland Browns, a move that would have cost much more draft capital than only a swap of Day 3 picks. That’s why I can’t hand out an A here.